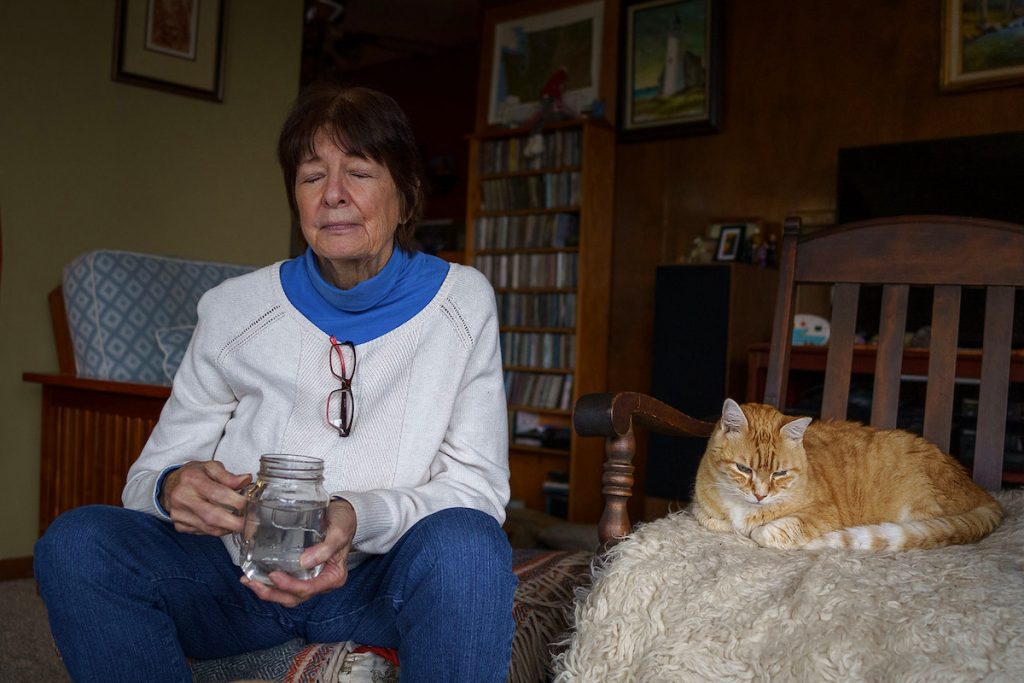 Having a mind and spirit meld with Ollie, a 14-year-old cat, once abandoned in Oak Harbor, Maureen Belle is in her element communicating with animals

While searching drewslist for compassionate cat care while we travel to Hawaii next month, I read Maureen Belle’s post, which offered her services for better communicating with our pets. I recalled her extraordinary rapport with our neighbor’s cat Millie the year before. Later, last year, Maureen held a virtual visit with our cat Ollie when he suffered from a UTI we didn’t know he had. Her advice sent us to the vet where Ollie was successfully treated.

Two weeks I ago, I emailed Maureen and asked if she remembered us and she replied she did. She asked if I would be interested in writing about her near death experience, which taught her to stay connected with, and to promote the messages from the natural world. Maureen stopped by earlier this month, and had a heartfelt ‘chat’ with our ginger cat Ollie, which he enjoyed. Our aging Plecostomas catfish, usually subdued, raised his dorsal fin and increased his color in recognition of her loving energy. I kid you not! I invited David Welton to join us. He wished to use his new 24 mm f1.8 lens that he received for Christmas. Impressed by the connection he saw, David invited Maureen to the home he shares with his wife Georgia Edwards the following week to meet with OSOSpecial, a spirited Bouvier des Flandres breed 18-month old puppy.

How did Maureen, who now is a green architectural designer,  a shaman, an author, an animal communicator, and someone with a sense of deep connection to life arrive at where she is today?

Maureen said she’d always felt close to the natural world, but kept her thoughts private in order to fit into the mainstream way of thinking. Her Irish grandmother called her fey. Her mother understood her. She says hers was a difficult childhood and she took comfort from summer trips to Yosemite where she ‘talked’ with trees, and visits to the beach where she ‘talked’ with dolphins and whales.

She grew up immersed in the construction world with her builder-developer father. By the time she was 20, she was choosing materials and estimating timelines for subcontractors. She started her own business remodeling and building homes. She married a dashing British gentleman and they lived on a ranch in Central Oregon. The couple had a son. When the couple parted, Maureen, now a single mom, was running a yarn/gift gallery out of an old house she remodeled. She taught weaving and spinning classes by night. She created her own line of woven fabrics. Then Fate intervened when she turned 30.

The sealants and adhesives she had used in building her home were toxic and Maureen became seriously ill with chemically-induced pneumonia followed by chronic fatigue. She realized she had lost touch with her body and had back-burnered her connection with the natural world. To heal, she practiced yoga and Tae Kwon Do. She tuned in to the voices of the wind, the trees, birds and animals. When she looked at people, she saw their soul illuminating their bodies. She remembered how she had connected with trees, animals, rocks and faeries when she was a child and how those gifts made her feel complete. She developed a new awareness.

“I realize we walk on the bones of our ancestors and share the planet with many gentle friends in the realms of nature who gift us daily,” Maureen wrote in the introduction of her book, Multicultural Feng Shui: Creating Harmonious Environments, a book published in 1999. “I saw, too, that our job is simply to nurture, foster, and learn from these entities.”

Maureen enrolled at the University of Oregon, Eugene, at the age of 32, earning a degree in architecture with a focus on green, safe and sustainably produced materials. She designed round buildings for a pre-fab company, and distributed safer building material in Hawaii.  While in Hawaii, Maureen worked with the Earth Trust and other environmental organizations on behalf of whales and dolphins. She made friendships with whales and dolphins that continue today, including the spirit of Keiko of Free Willy fame.

She ran a business for 10 years in Greenbank starting in the early 90’s. For that business Maureen designed and created a 10 acre, green building school and center. The center repurposed building materials, advocated using sustainably-made products, incorporated gray water systems and composting toilets. Its landscape was organic and served as a school for applying the concept of feng shui  and environmentally friendly construction.

It was when she was in her 30s when Maureen visited the Oregon Slug Fair and was told by a palm reader that she would die at the age of 55.

That prediction nearly became true when in 2007 Maureen was told she had terminal cancer.

“I was so shocked she said that—sure enough at 55, her prediction passed through my mind,” Maureen recalled of her diagnosis in 2007. “I was at 85 pounds with Hodgkins Lymphoma, Stage 4. My doctor told me, ‘I’m so sorry.’”

Maureen then experienced what many others—such as neurosurgeon Eben Alexander— have described when dying and of being given the choice of whether to return to the body or stay in the Light.

“I spoke with what I call the Presence,” Maureen said. “I was held in a field of love. Of infinite possibilities. I was connected to everything in the universe. An IMAX-type movie was going on in the background. I saw me as the egg, watching the sperm coming. I chose which sperm. I saw the egg fertilized. I saw the egg have this huge menu to choose from. I picked what I would be. The soul hadn’t been invited in yet. I saw my body call out and send an invitation for my soul to join it. We really are soulmates with body and soul.

“I chose to return to my body. I was told three things by the Presence. My mission was to let people know we have a choice—so similar to Viktor Frankl’s belief—that, no matter our circumstance, we are not victims. I had felt victimized. Secondly, that we must dissolve the illusion of separation humans have that is destroying the Earth. The Fascist theory of separation is happening now. When we realize our connection to one another, we cannot soil our nest. The third one: I had to learn to love humans as much as animals. I can say now, I’m about 90 percent there. I fell in love with the human heart.”

When she woke up, Maureen refused the doctor’s suggestion of reviving her malnourished body with a feeding tube. She declined any more chemo treatments. With the help of her sister and complimentary therapists, Maureen grew stronger and healthier.

“Within a month my hair was growing back,” Maureen noted. “My CT scan was clear. My oncologist saw the proof that the cancer was gone.”

Maureen works as an animal communicator and shaman these days, while building a home she designed.

“The three missions were my soul missions,” she said, recalling what she learned from the Presence in 2007. “It wasn’t building buildings. The glass panel between the two shattered. It was time to get on with my mission. I started helping people connect with their bodies, a body-soul reconciliation. We’ve been taught our body is only a meat package. It’s much more. It has its own intelligence.”

While visiting with Ollie recently, Maureen noted that he likes his name because he knows the name we gave him means we love him. She intuited that Ollie once had another name, and felt abandoned when his former navy family left him to wander in Oak Harbor when they left town. Through a cat advocate, Martha Murdock, Bill and I found Ollie outside an Oak Harbor home in 2013. The woman we met said he showed up one day and she was looking for someone to adopt him. Her mean-spirited uncle would not allow the homeless cat in the home, so he was made to live outside in the woods. Nine years later, Ollie still looks stricken when he sees us packing suitcases for another trip. Maureen advised that we picture we’re coming in the door with a happy reunion when leaving for trips and while we are traveling.

When visiting with David Welton and Georgia Edwards this week, Maureen was asked to connect with the departed spirit of OSCY, a much-loved Bouvier they had owned in 1992. They had been asked to care for the dog, which was previously owned by the couple’s financial advisor.

“I don’t think they appreciated OSCY,” David noted. “He was fearful and nervous when they went on vacation and left him with us. After a week, we bonded with OSCY. He once saved Georgia from a rattlesnake. He died when he was 12, between the televised 2000 Olympic women’s soccer match and Lance Armstrong’s Tour de France. He always had a Darth Vader voice.”

“And a soulful expression,” Maureen added.

Maureen intuited that OSCY’s previous owners wanted a trophy dog. “He wanted to love and be loved,” she noted. “He was sad they didn’t appreciate him. When he came to you, he had a soul mission. He was able to fulfill his mission with you. How wonderful for him.”

With David and Georgia’s current dog, the exuberant Bouvier OSOSpecial, Maureen noted that he sorely wanted another companion to play with. That he missed Hawkeye, his mentor, who died after David and Georgia first adopted OSO.

Georgia noted that OSO had been drooling a lot and took him to the vet to find out why. OSO was diagnosed with an allergy to his tooth plaque and was given antibiotics. He was prescribed a special diet and a water additive, which he doesn’t like.

“He’s off a bit,” Maureen observed, saying the antibiotics had lasting effects.

Meanwhile, OSO wandered between the humans, offering his paw and giving kisses. Georgia noted that Bouviers are droving dogs, bred for driving cattle to market in Belgium.

“They run alongside the herd and keep them moving” Georgia explained. “They steer the whole herd along by swinging their hips and hitting the lead cow in the chest.”

With OSO making his rounds to the humans, he was checking in, Georgia noted; he wanted to keep us all together.

“We were in Issaquah a few weeks ago, “Georgia added. “We saw a flock of geese. Four were separated. OSO wanted to bring those geese back to the rest of the flock.”

Maureen asked if OSO looks off into the distance and Georgia said all her dogs have done that. “He wants another animal,” Maureen said, recalling OSO’s connection with Hawkeye. “That love is forever. A lot of pets come back as guardian angels. OSO would definitely sense them. Someone is teaching him from the other side on how to be a good dog.”

“Maybe its Hawkeye,” Georgia said drily. “He needs to teach him more. OSO goes to his first obedience class next week.”

There is a magical feeling being with Maureen. As if all is well and we are not alone in this world.

To learn more about Maureen Belle and her positive array of services, visit her website or contact her at 541-221-6335 or at renieb@gmail.com.

On the Road Autumn—Chapter 4—The Magic Kingdom of Patagonia

On the Road Autumn 2022- Bishop CA to Patagonia AZ