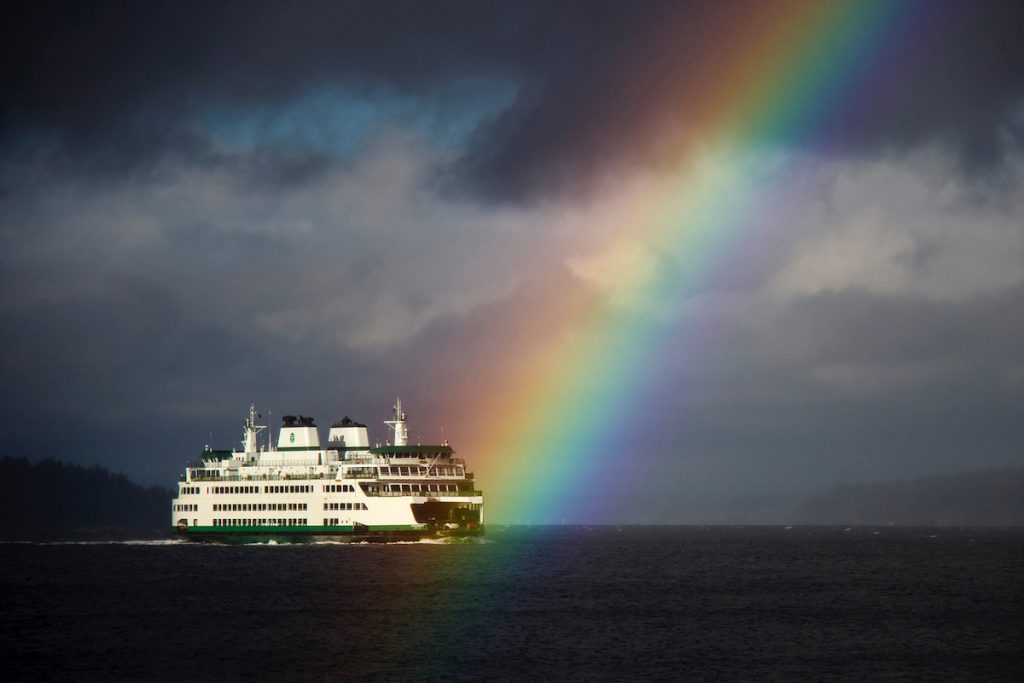 MV Suquamish sails from Clinton to Mukilteo on Jan. 3, 2022. This is Whidbey's photographer David Welton said he has waited 15 years for an image like this

Hello everyone, here is a review of 2022. Whidbey is a place full of causes, connections, characters and curated arts. All photos are by David Welton unless otherwise noted. Wishing you a year of being fully present to life’s gifts and lessons. –Bajada Bill and Cactus Kate

David Welton gets the shot he longed for. The photo, which also appeared in the South Whidbey Record, took second place in the state newspaper contest earlier this year. He wrote: “The money shot looks like it’s shining on the car deck. I thought, Oh my GodI I was delighted. The rainbow disappeared and I looked at the 56 pictures I shot. When I was looking at them, the battery in my camera died. But I got the shot. If I had taken pictures of the rainbow and lighthouse earlier, I wouldn’t have gotten the photo with the ferry. I had wanted to get this shot for 15 years and finally got it. A rainbow makes my day. I love to see a rainbow. I’ve wanted to get this photo and I finally got it.”

For gardener/landscaper Pam Mitchell, a good day is when she’s in the garden. Many know her as the iconic black-hatted friendly vendor who sells plants and veggies at the Bayview Farmer’s Market. She sings the praises of playing in the dirt among growing things.

Affordable housing for working people and our homeless population is an ongoing challenge: The human right to shelter.

A model for workforce housing is Langley’s Tiny Homes in the Name of Christ village of nine, nearly complete homes. Shepherded by Coyla Shepard, the homes are nearing completion.

An education that cultivates her talent celebrates middle school student Anja Bentsen and her musical project for the Alternative Learning Experience program launched by the South Whidbey School District the previous fall.

We have a terrific resource for students and the community at the South Whidbey School Farms program. AmeriCorps interns help teach farming skills to more than 600 students a week.

Following a two-year hiatus due to COVID, Langley welcomes the whales parade returned to great color and celebration.

Having fun to support a serious issue found members of a Shimmy Mob who danced to raise funds for CADA, a domestic abuse support program.

Why Ancient Wisdom Matters in the Modern World was a Trudy Sundberg lecture series sponsored by Sno-Isle libraries and held at the Whidbey Island Center for the Arts. Dr. Wade Davis is an international cultural anthropologist, ethnobotanist, author, photographer, filmmaker, and teacher. His work has focused on the many of the world’s indigenous cultures and languages and has taken him all over the world. He served with National Geographic’s Explorer-in-Residence program from 2000 to 2013. Spending three years in the Amazon and Andes he made 6,000 botanical collections, has written 23 books and published 300+ articles. He has made over a dozen documentaries.

Following a leak that the Supreme Court would overturn Roe v Wade, Handmaids–in character from Margaret Atwood’s Handmaid’s Tale and the Hulu serialized production of the book–appeared around South Whidbey to raise awareness on preservation of our democratic rights.

Our ‘Conductor Fun’ Jim Freeman, the islands emcee and funnyman, passed away June 19, days away from his 75th birthday. He was one of the best and could always make you laugh.

Our Whidbey Island Fair continues to be a popular summertime event. The amount of volunteers and the fair’s staff continue a long tradition of providing exhibits, entertainment and food. Fair Manager Carol Coble has done a remarkable job since 2015 of organizing the components that result in a fun family experience.

We celebrated Pat Powell’s legacy of stitching together forever open space and farm land with the Whidbey Camano Land Trust. Pat retired after nearly 20 years as the Trust’s executive director.

Keke Cribbs was moved to create a glass sculpture featuring Persephone following the Supreme Court’s dismantling of Roe v Wade. “Inspiration for making this just came out of me,” Keke said, while we visited in her light filled kitchen. “I had to do this piece when the decision on Roe vs Wade hit the news. I was inspired in part by my granddaughter Livia who is studying classical Greek and who introduced us to the Broadway musical soundtrack of Hadestown, which is the story of Orpheus and Euridice, but told in terms of our modern lifestyle with ‘Hell’ being the working peoples’ unforgiving life in the factories. In my youth in Claremont, one of my favorite films was Black Orpheus which has certain visual similarities to the story of Hadestown. “I decided that the creation story of the Four Seasons–as represented by the Greek myth of the abduction and rape of Persephone by Hades, who takes her for his queen in the Underworld, and her eventual return for half the year to the Above World, where she provides fertility and the harvest–kind of said it all in this piece. Without females the world as we know it would not exist, so it is important to respect them for all they have to give and not abuse them.”

United Student Leaders pressed Island County’s board of commissioners to declare a climate emergency. The board stopped short of this step to the disappointment of the students.

A rescued Husky-mix dog named Trek inspired a community to care for him enough so that he could lose his fear of humans. Trek’s story introduced us to a community of compassionate women who rescue and care for dogs.

October is civility month and Civility First held a series of workshops on how we might better be able to talk and listen to one another.

Heather Johnson, former executive director of the Whidbey Institute, retired from her post to start her own practice helping folks to address their inner climate crisis.

Bill Poss and I took a road trip Oct. 15 to Dec. 16.  Visiting family, friends and colorful landscapes, we closed out the year visiting the Magical Kingdom of Patagonia,

We also visited our son Raymond and his partner Gino where they live in Southern Orange County. Beautiful beaches, warm sun. Seems like a dream now on this dark New Year’s Eve day in Langley.

While on the road we visited our former home in Southern California, camping at Malibu Creek State Park.

Our visit to Monterey and Santa Cruz brought us together with good friends.

The Tuesday after we returned home, Whidbey was visited by a snow storm.

And a 13-foot king tide which flooded Bells Beach Dec. 27:

Norma Jean Young, who we met on Whidbey in 2000 has since moved to Mt. Vernon. Here she gets ready for lift prior to a party celebrating 40 years of her Reiki practice:

And our son Raymond flew up from Orange County CA to join us for New Years 2022 and to bring in the new year. He and his partner moved from Portland to Laguna Niguel CA last July.

Looking forward to the stories of 2023. What will the year bring us?