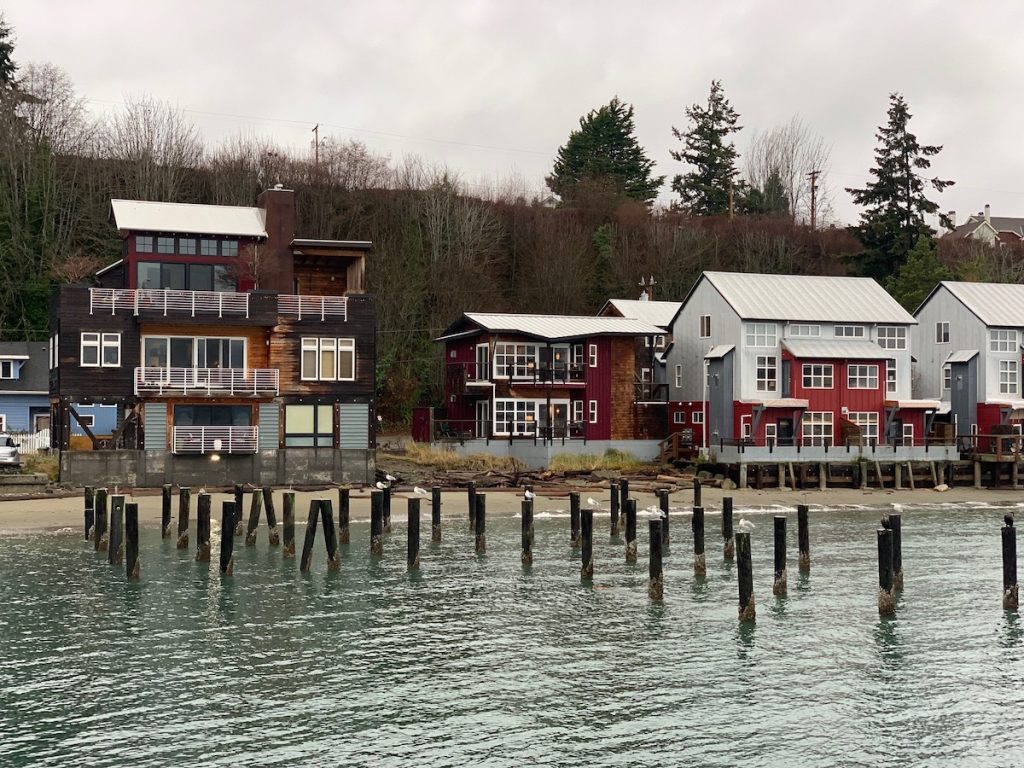 After feeding the marina's crabs, we walked along the dock admiring the Boatyard Inn Hotel along Wharf Street. Though it's a gray, cold and damp day, there's a feeling of home and well being on our island.

Exhilarated by a morning swim with my lady mermaids Sophie and Sharon at the Langley Marina in 50° water, I am writing to let you know that after less than two weeks following our nine week road trip, it is good to be home.

You may ask why is that?

It is swimming in water joyously in the winter with women who love the thrill of the chill, with Bufflehead ducks, a Kingfisher on a branch, a harbor seal peeping curiously at us, Sarah the Golden Retriever leaping in the water to join us.

It is the many moods of Whidbey.

Following last week’s snow, extreme cold and ice, we stepped carefully on the icy surfaces and drove with easy- to-install Autosocks to avoid sliding off the roads. We were grateful our power stayed on.

Overnight Friday, Dec. 23, the snow miraculously disappeared with the rains and the temperatures climbed 20° to the mid forties. Driving to Langley on Christmas Eve, we watched the clouds, dark charcoal gray against a light gray sky. Saratoga Passage, framed by Camano Island and the snow-covered Cascade mountians, reflected a color of charcoal gray. Fir and cedar trees waved their tall arms in the wind. An eagle floated by at eye level.

At the marina we dropped a chicken carcass we had cooked earlier to make broth and meat, to the crab for their Christmas dinner. We admired the cormorants perched on an abandoned dock. We admired the high-pitched call of the American widgeons as they flew overhead in the flock. The colorful Boatyard Inn Hotel lining the waterfront. Our son Raymo texted that it was “So nice and green here,” where he and his partner Gino live in sunny and warm Laguna Niguel with their wonder dog Rogelio. I texted back “It is so nice and gray here,” and meant it.

Afterward we visited another favorite touchstone, the Langley Library. There I was overjoyed to talk with excellent library assistants Karen Achabal and Rhianna McBride. Rhianna wondered, how, when the library contains “so many mindsets under one roof,” as the library does, that some small-minded folks complain the library has homeless people visiting. Sno-Isle libraries are the greatest democratic institution on the island!

Christmas Day Bill zipped me into my thermal wetsuit. I added a silicone cap, a neoprene hoodie, and a thermal swim cap. We drove to Goss Lake, where tears formed in my eyes to be back to this touchstone lined with evergreen trees. I walked in and swam. Ice cold water flowed down the neck of my wetsuit and in less than five minutes I walked out of the lake, fearing I was losing my tolerance for cold water swimming. The lake’s temperature was probably 42°. Drove home to put on warm and dry clothes. Our friend Barbara MacCallum stopped by for hearty soup lunch, and a visit. Later we walked around Goss Lake, just missing the afternoon rain. We drove to long-time friends Joe and Sydney to drop off a Christmas gift in their new home. They were our neighbors for years and have moved to a one-story home in a great Freeland community.

We were invited to celebrate with our family of friends with Roger and Sheila at their home. Claudia and Chuck, and our friend and neighbor Coleen joined us. Conversation and bonhomie flowed effortlessly as we ate delicious lamb shanks, mashed potatoes, fresh salad and apple pie and whipped cream. We talked of the future of Whidbey. Roger is brimming with ideas on how to guide Island County’s future with credible ideas for workforce housing, supporting our elected officials, maintaining community, and re-invigorating outmoded models of operation. He is overflowing with ideas to re-kindle the can-do community spirit that swept South Whidbey in the 1970s, where real magic and the connection of people resulted in pulling together and getting things done. I second that motion! Let’s come together and make happen the way of life we wish to preserve and promote for Whidbey Island.