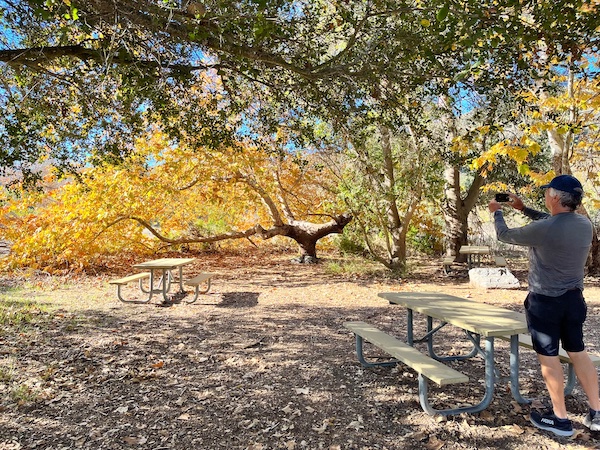 Welcome to the sixth chapter of our on the road series. This leg of the journey takes us from Anza Borrego State Park to the beach canyons of Southern Orange County. For four of the nights the past week we left our Marion at the O’Neil Regional Park and stayed with our son Raymo, his partner Gino, and our grand doggy Rogelio in their Laguna Niguel apartment. Luxurious!

We drove from the saguaro forest and mountains of Usery Regional Park in Mesa AZ, stopping for breakfast at the Mountain Quail Cafe in the snowbird trailer park city of Quartzite, and spent the following two nights at Anzo Borrego State Park. The campground was full two weekends before Thanksgiving and we camped in a canyon of big rigs that blocked the view of the desert mountains. The all gender bathrooms are sadly maintained, smell of pee, the showers deliver lukewarm water. The place is over touristed in our opinion.

On our first night there we attended a ranger talk about the night sky. This state park is an international dark sky site. Our ranger used a laser to point out nebulas, planets and stars. We gazed through a telescope and clearly saw four of Jupiter’s moons.

A popular hike is up the Palm Canyon Trail. A flood in 2004 uprooted old native palms and tossed them like toothpicks along the canyon floor. They are the only native palms in California. Fan palms host dried fronds, forming a grass skirt that protects the palm bark from insects and desert heat. Nearby the Borrego Springs Library is newly built and its sweeping deck offered wifi and views of the desert.

Leaving the southern desert in San Diego County, we drove along Yucca Canyon Highway toward the small 4,000 foot elevation mountain town of Julian. We found nirvana in the love-made food at Soups & Such Cafe in Julian. Beatrice our server made us feel welcome.

We stopped next door at Mountain Bead Works, admiring the array of stone and glass beads. Chester and Sadie, the owners’ friendly Golden Retrievers, made us welcome. Patty and Dale Strong are the owners of Mountain Bead Works and the place is authentic eye candy, full of bead art for rock hounds like Bill and I.

Bill chose a string of hexagonal faceted agates, which I strung on a bracelet for him. Check out the photo below of him at the beach enjoying a muffin and wearing his birthday gift.

We stopped in at the Julian Library, another of San Diego County’s jewels in the crown. There we spoke with a former horse trainer named Liana, now a library tech, who moved from Colorado to escape the cold. She found a niche in the children’s department of the library.

We stopped by the Santa Ysabel Nature Center, enjoying a walk through old oak trees That evening we joined my niece Janelle, her husband Kevin and their 12-year-old daughter Lauren for dinner. Lauren tells me she will be a CEO of her own company. I do not doubt it. With her parents’ love, her education, her strength from gymnastics, her love of playing the harp, and her family’s pet collection of rescue dogs, a pair of cats, and 14 hens and roosters, she is growing up in the best of environments.

Leaving the desert of Hemet behind, we stopped for lunch in Carlsbad at Punjabi Tandoor. I had read about the place in a past article of High Country News. Its home-cooked chicken tikka was medicine for the soul.

Arriving at campsite #65 at O’Neil Regional Park, we learned the campground was ‘sold out.’ Our riverside campsite was scenic and a quarter mile away from either of the two bathroom buildings, which looked like prison blocks. Barred windows, concrete block walls and no heat. We could not move any closer to the restrooms. The night time temperature dropped to 38° and I was so grateful that Marion’s propane furnace was finally repaired after a year of puzzling out why it wouldn’t work.

I told Bill I couldn’t face the half-mile round-trip walk to the bathrooms, and said I wanted to book a hotel. This was the Tuesday before Thanksgiving and while there was availability at the hotels at $155 a night, serendipity took over. Our son Raymo called at that moment and said we were welcome to stay at his apartment in Laguna Niguel. Raymo and his partner Gino moved in about a month ago. It is a two-bedroom comfortable place with views of the Santa Ana mountains, close to a beautiful county beach. Luxury for us, used to living in less than 80 square feet with no bathroom, and, at O’Neil campground, which had no electricity.

I confess I’ve long held a bias against Orange County, thinking it too mainstream, too la-de-da for our taste. I feared I’d become homogenized into a Barbie if I liked it. Spending the past four nights there opened my mind that comfortable isn’t bad. And beauty in architecture and people is a balm to the senses. Plus the availability of excellent eateries such as Bill’s new found bread temple FKN Bread in San Juan Capistrano, give the region a sense of place.

The following morning, Nov. 23, we drove to Gelson’s Market where Bill bought his favorite honey bran muffins. We drove then to Aliso Beach Park, about 10 minutes from where Raymo and Gino live. Great to be on the Pacific Coast with its crashing waves, cruising Brown Pelicans, leaping dolphins, tide pool hermit crabs, friendly gulls and pigeons.

The water temperature felt about 65° and I fancied swimming there the following morning. We walked north along the beach, enjoying the views from a cave made of crystals and cool stone. It is magical here and the sand feels and looks like brown sugar. Speaking of brown sugar, there’s a place near Gelson’s Market called Bronze and Sugar. Apparently women get their buttocks scrubbed with sugar to ensure the best look in thong bikinis.

While listening to the excellent So Cal Sound 88.5 local radio station, we learned that Bono of U2 had just written a memoir, Surrender. Bill said he’d like that for his birthday We drove to Laguna Beach, where we browsed in the Laguna Books.  Just my kind of place with friendly book-loving staff. We found the book and looking for a gelato place, were directed to a famous place a few blocks away. We parked nearby the Laguna Beach Library, where I waited in line for my gelato, enjoying a conversation with a family from Portland. The gelato is worth the 10-minute wait in line. Bill and I shared a raspberry/double chocolate dish of yum.

Walking across the street, we stopped at the railing of a restaurant to watch the sun set into the ocean. Bill pointed to our left and we spotted an osprey sitting within a few feet of the folk sitting out on the restaurant patio. We wondered if our Whidbey ospreys winter here.

That night we enjoyed more of the Punjabi Tandoor leftovers from the day before with the lads. They gave us their bed to sleep in. We woke up to the sun rising over the Santa Ana mountains.

The following morning was Thanksgiving and Bill’s 68th birthday. After breakfast we returned to Aliso Beach and we planned to swim. However the waves crashed at the shore and the best we could do is wade in the retreating foam. I was wearing my swim suit and while wading in the water a woman from India dressed in a sari approached the sea with her palms cupped and raised in front of her. She bent to collect some of the water and was knocked over by a wave.

Bill, Raymo, the woman’s two grandsons, a body surfer and I all helped her to her feet. She spoke with an accent and said she had come to the Pacific to make an offering for her late husband and mother. Rolling in the waves didn’t faze her in the least. She told me it is her goal to visit every ocean on Earth to make an offering for her loved ones who have passed. Her faith was so sincere, I had tears in my eyes.

Showering at the boys’ place, we drove to Cota de Caza to celebrate Thanksgiving with Bill’s brother Larry, his wife Candyce, and their son Jeff and his lady Kim. We were joined by the standard poodles Mia and Diego. The dogs stood silently watching Candyce while she ate her dinner, hoping for a handout. The feast was delicious and we appreciated all the work Candyce, Kim and Larry put into preparing the meal.

Had busy thoughts that night, which kept me from sleeping. The following morning we walked in a beautiful natural canyon at Aliso and Wood Canyons Regional Park. We walked three miles through open space. My nature is such that I need regular infusions of natural landscape, free of human touch, which this walk gave me.

After our walk we drove by the pyramidal shaped Chet Holfield Federal Building, also known as the Ziggurat. Its current tenants house U.S. Citizenship and Immigration Services, IRS, U.S. Customs and Border Protection, and U.S. Immigration and Customs Enforcement. Plans are to re-imagine another use for the Laguna Niguel Landmark.

Saturday morning we enjoyed a saltwater swim at Crown Valley Community Pool, minutes from Raymo and Gino’s in Laguna Niguel. Posh and unpretentious.

Afterwards, we drove to Christmas Cove in Laguna Beach. We walked along the lushly landscaped walk lining the Montage Hotel. I enjoyed people watching and listening to the many different languages I heard spoken. If only the world could get along like this. We descended the stairs to the same cave we had visited days before. Only on this Saturday afternoon, the place was thronged with families and photographers getting their holiday photos/family photos taken. We sat with our backs to the magic rock wall taking the whole scene in. As we looked out at the sunset, a plane wrote in the sky: G ♥️S. After sunset the pilot sketched another heart in the sky.

We visited San Juan Capistrano twice, a beautiful small town with a famous mission. Breakfasting Sunday Nov. 27 at the dog-friendly El Cafe Real I was struck by a great sense of satori, enjoying the company of Raymo, Bill and Rogelio, while listening to the great singing voice of a former lifeguard Olivia Rohde while she played guitar and sang tunes by request. Ah.

We packed up and hugged Gino and Rogelio goodbye. Now I’m at a Starbucks in Rancho Santa Margarita typing this story.

Adios till next time from Bajada Bill and Cactus Kate.