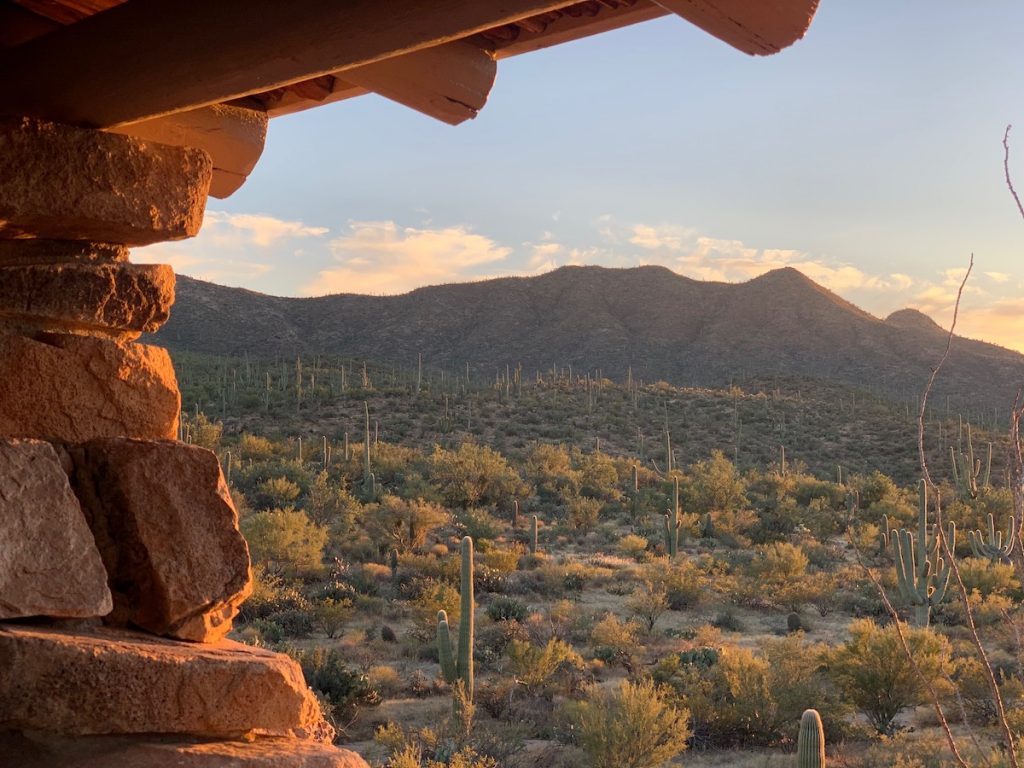 Ez-Kim-In-Zen picnic shelter built in the 1930s to give Depression-era men a chance to get skills and earn money. The shelter is at Saguaro National Park, along the Bajada Loop drive

Ah, we have left our much-loved saguaro country in Tucson and Mesa AZ, and are now sitting in Marion at Anza Borrego State Park. Recent rains yield blooms such as purple verbena, gold daisies, and walking tonight we even saw a sacred datura plant. This is our fifth week on the road with Beatrix the Toyota Highlander, and her faithful sidekick Marion the Trillium Trailer. We are Cactus Kate and Bajada Bill. The past week we have enjoyed visiting with family and friends, all in a landscape of cacti and mountains.

Visiting Saguaro National Park East, with its views of saguaros from above, the experience was shaken by the roar of military jets flying over, making as much noise as the ones do in the Northwest. I understand we need a strong defense force, and I firmly believe that the military has no business flying over public recreation areas.

We had a lovely swim at the Oro Valley Aquatic Center on Friday, Nov. 11. Nearby, we met my Uncle Orland and cousin Julie, where he took us out for lunch at Guadalajara Original Grill. He is recovering from a double cervical surgery, thanks to the hawk eyed attention of his nurse daughter Julie, who returned home to Michigan Nov. 14 with her wonder dog, Lyra.

Back at camp we watched a Gene Wilder and Richard Pryor movie that was filmed in Tucson called Stir Crazy. The characters play a couple of guys sent to prison. Apparently, like in the film, inmates compete in Tucson’s annual rodeo each February. We enjoyed the good acting of these two friends.

On Saturday, Nov. 12 we drove into Tucson and had breakfast at Tumerico. I ordered a delicious Molé enchilada with guacamole and Powers, a healthy green salad. Bill ordered lovely Huevos Rancheros. We wanted to hang around downtown, but many of the streets were closed off due to a big event called Dust, which featured bands we had never heard of.

Returning to camp, Bill pulled the furnace (from hell, our Trillium ally, Joe, in Calgary, Alberta calls it, due to the trouble we’ve had with the extremely simple unit) and we attached a new seal to a bolted plate, replacing the one that had deteriorated. Bill tried for quite a long time to light the pilot and get it to ignite the furnace burner. Yet, it would not warm the trailer.

The following morning we hiked the Hugh Norris trail nearby our Gilbert Ray campground, at Saguaro West National Park. The trail is steep and led us through a forest of cacti whose needles glowed in the morning sun. Hugh Norris was a celebrated tribal Tohono O’odham police chief. This is one of the best trails we’ve hiked, for its scenery and expertly cut granite block steps. I counted 812! Many are 12 -18 inches high, demanding great stretches on the hip flexors, both up and down.

Along the trail we met Rob, a volunteer park ranger, who spends winters in Tucson the past 10 years. He summers in the Freeland/Greenbank area on Whidbey Island.

Back at camp Bill made yet another attempt at fixing the furnace and found that its gas line still leaked. Our now buddy, Joe, in Calgary, Alberta, suggested we replace the thermocouple.

One of my pet peeves when camping are the giant RVs and fifth wheel trailers that steal the view in campgrounds. They’re two stories tall and probably 40 feet long. We noticed quite a few while camping and here is my forum for venting.

Monday, Nov. 14, we hiked the Hugh Norris trail a second time, starting at 2,670 feet and hiking up to a saddle at 3,160 feet. It was most enjoyable, and exhilarating to be in the presence of so many excellent saguaros. There’s something we find about them that lifts our spirits. Animal life remained hidden from us humans, except for a chipmunk at the top, which accepted our offering of nuts.

Later, we drove into Tucson, and bought a quiet electric heater to replace our old one that hummed loudly and could not regulate the temperature. After our errands in Tucson, we returned to Saguaro National Park West. At 4 o’clock we drove along the Bajada Loop road up to Ez-Kim–In-Zen picnic area and watched the sunset. Wonderful Civilian Conservation Corp. era rock structures framed the sunset. A really magic day.

Nov. 16 we met with a woman we met last Spring in Silver City NM. Shirley and her husband Bruce took us for breakfast at Michas. I enjoyed hearing his tales of working as an epidemiologist in Botswana and falling in love with its people.

Arriving at Usery Regional Park near Mesa, Nov. 16, we enjoyed dinner with our friend Gordy Blair, who is like a brother. He is also a mechanical problem solver and craftsman. Using his tools, he helped Bill install a new thermocouple to the furnace. Fingers crossed the furnace works when we camp in California at state parks with no electric hookup.

The following morning, Bill and I visited with my niece Renaya and her eighth grade son Quinn. Gordy met us for lunch at Pita Jungle, which serves excellent healthy food. Quinn loves their jalapeno/cilantro hummus. It is delicious. Quinn told us of a planned Boy Scout camping trip that weekend and begged his mom to let him and his brother Reid to do a survival camp for a day or two this spring. Both Quinn and Reid are creative and fun teens to hang out with.

Later Gordy joined us for a moderate hike at Lost Dutchman State Park. There we talked with a tan, sweating, shaved body, no-fat man who was training for the upcoming Iron Man event Nov. 20 in Mesa. He stopped long enough to consult his cell and guide us along the trail.

Nov. 18 Gordy joined us for a walk along nearby Saguaro Lake, located in the Tonto National Forest. It is one of Renaya’s favorite places to paddle board.

After our hike, we talked with Patricia Rosen from Austin TX, who was competing in the Iron Man event in two days. She had stopped by Saguaro Lake to practice a swim. We talked about open water swimming and I held her cold hands to warm them up. She is delightful and an inspiration of can-do-ness. She told us she got started doing the 2.4 mile swim, 112-mile bike ride, and 26.22 mile run back in the 1990’s following a divorce. I invited her to visit Whidbey and join us for a swim with my mermaids at Goss Lake.

Afterwards we joined my cousin sisters Rose and Karen, and two of their grown children, along with Bill’s nephew Eric, and his new wife Jessica at the Gilbert Riparian Reserve. We saw the newlyweds’ photos of their Roman/Amalfi Coast honeymoon, and visited with the cousins.

Enjoyed dinner with Gordy in Marion that night following a glorious sunset that Gordy took photos of. We feel at home with him and tell him he’s like a brother.

We left early Nov. 20. My niece Renaya stopped by to say adios. She was wearing a hat her mom Jan made. Renaya and her husband Dan work with the homeless community. Jan makes cozy hats for the folks, and Renaya was gifted one of them by her mom.

Heading to Quartzite for breakfast, we drove by the Palo Verde nuclear power generating station in Tonopah. We saw half a dozen plumes of steam rising from the desert. The website states: “Palo Verde Generating Station has been the nation’s largest power producer of any kind for more than 25 years – all of it clean and carbon-free. As the heart of the APS generation fleet, it provides the foundation for the reliable service our customers know they can count on. The plant is a critical asset to the Southwest, generating more than 32 million megawatt-hours annually – enough power for more than 4 million people.”

Had a wonderful breakfast in Quartzsite at the Mountiain Quail Cafe. It’s always real there. The owners wish to retire and are selling the place for $300,000. It is a popular eatery and it sells local crafts. I like Quartzite’s trailer-life atmosphere with gem stores, dried fruit stands and down-home characters.

We drove west on I10, heading for Anza Borrego State Park. We passed by loads of boon docking RVs and their OHVs—off-highway vehicles. In site #45 at Anza Borrego, we are dwarfed by the giant big rigs. The park is named for 18th Century Spanish military politician Juan Bautista de Anza, and the bighorn sheep, borregos. The mountains glow at sunset. We watched a star-gazing event at the amphitheater with the ranger using a laser to point at the night stars. We looked in a telescope and saw the four moons of Jupiter. Cool!

That’s all for now—our next trip is to visit my niece Janelle at her desert home in Hemet, followed by Thanksgiving in Orange County with Bill’s family, and our son Raymond and his partner Gino. Adios, partners, from Bajada Bill and Cactus Kate. Happy Trails!