On the Road Autumn—Chapter 4—The Magic Kingdom of Patagonia 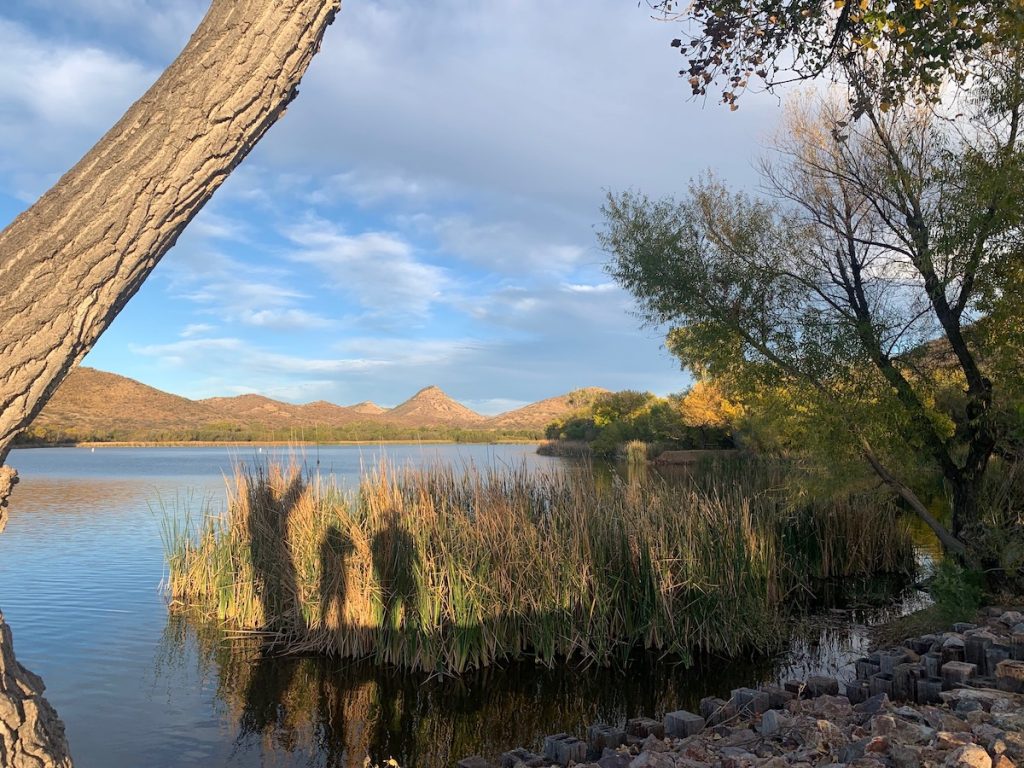 Welcome to week 4 of our autumn 2022 On the Road series. We camped for six nights at Patagonia State Park amid the mesquite trees and mountain ranges. This was our first visit to southern Arizona and we will certainly return. We are Bajada Bill and Cactus Kate, travelers who enjoy nature, good food, good people and folk art.

Back on Whidbey and the greater Seattle area, a severe wind storm knocked power out at our Morning Glory Lane home Nov. 4. The power stayed off for 5 nights. Our houseguests learned how to operate a generator and prime the pump for our 50 gallon aquarium. A neighbor’s mailbox blew over, a tree crushed another neighbor’s fence. Still, our resilient house guests, who are exploring whether they can weather Whidbey’s autumn and winter climate, stayed somewhat warm, thanks to the helpful presence of Ollie our loving tomcat.

We thank our neighbors Cathe and John, Ann and Joe, for checking in on our friends. We live in a great neighborhood.

Meanwhile, I wish to complement the Arizona regional and state parks for the excellent quality of their bathrooms. Here at Patagonia State Park, our one campsite bathroom is very clean, painted green, and I admire its green linoleum speckled floor. My one complaint is that the bathroom was 200 steps away from our lakeside campsite #106. We were camped between the Santa Rita and Patagonia mountain ranges.

The country is soothing to the senses with soft rolling hills covered in mesquite trees and ocotillo cactus. We like the drive out of the state park, which gives us vistas of golden folded hills and the mountain range of the Patagonias. The mesquites exude a pleasant musky and comforting scent.

On our first morning we drove to Patagonia and enjoyed breakfast at the Gathering Grounds. Delicious breakfast and lunch, bakery and home made ice cream. The best chocolate ice cream I’ve ever tasted!

Later, we drove to the nearby border town of Nogales. Its sister city Nogales is over the border in the Mexican state of Sonora. We saw the border wall and the long line of cars waiting to enter Mexico. Locals tell us it is usually a three-hour wait to cross into Mexico. Nogales AZ is a colorful town with brightly colored houses and businesses. We would visit again on Nov. 9, the day we left camp, and discovered a nail in the driver’s side front tire which reduced the air pressure by 10 pounds.

Later on we hiked to Partnership Hill at Sonoita Creek Preserve. Adjacent to Patagonia Lake State Park, the trail is a moderate ascent up a rocky path among ocotillo and mesquite, along with generous cow pie heaps.

At the peak we sat in the shade of a mesquite and looked at the length of the man-made Patagonia Lake. Fran, the Ohio-based volunteer at the park’s visitor center, told us the lake was once formerly rail tracks, which were pulled up and made into razor blades. The lake was later filled and is a favorite fishing hole for crappie, bluegill, rainbow trout and catfish.

On another day we visited Bisbee, a former copper mining town with a yawning open pit. Bill’s grandad John Poss, once worked there as a mining engineer. First we picnicked at the San Pedro Conservation Area. It is a wetlands with old-growth Fremont cottonwood trees, one which is 30 feet in diameter and over 130 years old.

We had a load of laundry to do and drove to the Bisbee Cafe and Laundry. The place was busy and we were lucky to score an available washer. Next door Natalie Fredrickson, head beer wench at the Electric Beer and Bisbee Sodawerks, had invited a good country/blues group: The Band Wanted to play under the awning. While our laundry washed, Bill and I drank homemade hibiscus soda—Natalie and her crew make all their own craft beers, kombucha and sodas— and listened to toe-tapping, sing along music. Natalie, wearing a cat ears headband, was a friendly woman and thanked by the band for inviting them to perform. We enjoyed music while our clothes dried and looked at the characters that sat around us. They looked like the cast from the 1940’s film Arizona, which was filmed in Tucson. We pondered if this country distills people to their essence.

While we sat outside looking at the cars and people passing by, a red pickup arrived and two gentlemen exited. Partners Sierra and Les had arrived in Bisbee four months ago from Texas, and told us they felt welcomed in the community.

My Uncle Orland, who lives in Tucson, suggested we visit the nearby St. Patrick’s Catholic Church. Its beautiful stained glass windows had just been restored last summer by the great grandson of the original artist Emil Frei. Originally created between 1915 and 1917, the windows suffered damage from BB bullets 25-30 years ago. The windows were covered to protect the art in a substance called Lexan, a polycarbonate vinyl material, which became opaque and eventually resembled the surface of plywood. A restoration was proposed in 2014. By 2019 a fundraising goal of $500,000 was proposed and was reached by January 2022. The stained glass is outstanding.

Monday morning, the day before elections, we sat under our campsite ramada, looking out at the lake and watching yellow butterflies fly by. Earlier we were visited by a plague of Great-tailed Grackles whistling and calling. They perform bug removal service by picking insects off our car’s front grill. We found them entertaining and they enjoyed the crumbs of our chips.

When a small hawk flew by the bird life went silent. Guarding our campground are the twin peaks of Mount Hopkins at 8,585 elevation Mt. Josephine at 8,474 feet. A distant range we can see from camp is called the Boquivaris.

One of our favorite views driving into the magic kingdom of Patagonia is the cliff of red stone rising above the cottonwoods and mesquite. It was 75° outside one day, and glorious. Beautiful sweeping clouds in the sky seemed like a dream.

We parked in the shade of Velvet Elvis, a restaurant one should not fail to visit for the experience. We ate there Saturday night and enjoyed watching the locals and admired the religious-themed art, along with a velvet painting of Elvis. The food is delicious. Bill and I each ordered personal pizzas. Later, we walked across to the town plaza, where a Grateful Dead cover band was playing, celebrating the fourth annual Spirit World 100 race, where gravel-road bike participants have 10 hours to ride their bikes from Patagonia AZ to the Mexican border and back.

Last September, while swimming at Goss Lake with my fellow mermaids, my wedding ring slipped off my finger into a deep part of the lake. I was sad at the loss and couldn’t believe the ring slipped off after three year-round seasons of lake swimming. We found a silver wedding ring of three intertwining loops—one for Bill, our daughter Gillian, and our son Raymond, at Global Arts Gallery & Lillian’s Closet. It is run by cool ladies, one named Adrian who has lived in Patagonia since the 1970s.

Election day, Nov. 8. Willie Nelson and Karen O on KPUP community radio 100.5 FM were singing Queen’s song Under Pressure. Yup, there was pressure on our democracy by election denier candidates. KPUP plays extraordinary music and its announcers tell us the station is supported by the good people in the Magic Kingdom of Patagonia.

We discovered that our next-door tent neighbors back at camp are the couple Erik Makala, and Missy Britt, who own the Kokanee Inn in Joseph OR. We stayed with them last June. They run a top drawer B+B with super tasty breakfasts. They were traveling in November, a slow time for their inn. They enjoy gravel road bike riding.

On our last day we stopped by the Patagonia Public Library for its wifi. A downside to this part of the world is limited cell and wifi coverage, which gave us the opportunity to hang out at the library. I met a woman who is friends with Penny Cabot from Whidbey Island. We each have a mutual friend in common, Gretchen Lawlor. The woman also knew the man we met last May in Taos NM, who told us he winters in Patagonia. So appealing was his emotion around the place, we told ourselves we had to visit the next time we visited AZ. His name is Steve Rose and we learned he stays at her house.

Taking a cue from the gravel bike riders, who told us how much they enjoyed the San Rafael Valley, we drove out, stopping to picnic at a flat prairie framed by mountains near Vaca Ranch.

We watched a pair of ravens sore overhead swooping and playing. They came as an affirmation just as we were saying there’s such a sense of place here when others might say we’re in the middle of nowhere. Another raven flew by and greeted us with a friendly croak. We had listened to the audiobook Journey to Ixtlan, by Carlos Castaneda, in which he describes his apprenticeship with the sorcerer Don Juan, a Sonoran Yaqui Indian. Don Juan’s wisdom included affirmations from nature, such as a raven’s flying overhead. Don Juan also mentioned diableros, which can take over one’s soul. We imagined they were a metaphor for the times when fears take over and throw us into confusion.

We left our camp at Patagonia Lake State Park Nov. 9, a wonderful place to stay for six days. We loved the morning song of the Great-tailed grackles.The color of the cottonwood leaves changing to yellow. The musky smell of mesquite trees.

As we were fixing to leave, Beatrix’s dash screen noted our tire pressure was low. We paid $2 at the park’s Aramark air pump. Since the only gas station in Patagonia had closed, we drove to Nogales. First I phoned Walmart, which had a tire service. We were told we would need to wait at least three hours.

I Googled tire repair and found the well-reviewed and popular El Camino Tires. They practice first come, first served service and are great. We pulled in, the tire was removed, the nail removed, the tire replugged and installed within 10 minutes. Ten bucks. Awesome.

Googling healthy food in Nogales, we were directed nearby to  La Castellana Café, which provides a restaurant, bakery and nursery staffed by special needs adults. Our food was delicious. Tacos and chili relleños. The love of the staff and the counsellors was felt in the delicious food. We enjoyed our meal for dinner that night, too. One counsellor said she had worked at the place the past 18 years and said it is a happy place.

We drove to Tubac and bought more Christmas gifts at Casa Maya de Mexico. Lourdes, who lives in Nogales,  presided over the colorful and eclectic store, and carefully bubble-wrapped some of the pottery we bought.  We walked around enjoying the colorful adobe buildings.

Heading for Gilbert Ray Regional Park in Tucson, we swam first at the Clements Pool in southern Tucson. This facility is clean, there are seven lap lanes and it is free.

We were surprised to see several hundred grounded military planes lined up in the Airplane Boneyard. It is a historical landmark and home of defunct military aircraft from WWII until now.

We felt like we had returned home when we pulled into campsite #64 at Gilbert Ray Campground. We have a saguaro outside our back window with a view of the Tucson Mountains. Many films were made in this part of Tucson, including Arizona, starring William Holden and Jean Arthur, who play characters trying to tame the city prior to the Civil War. We marveled at how the film had the same clouds, mountains and saguaro cactus as what we were seeing out our window in the near-full moonlight.