On the Road Autumn 2022- Bishop CA to Patagonia AZ 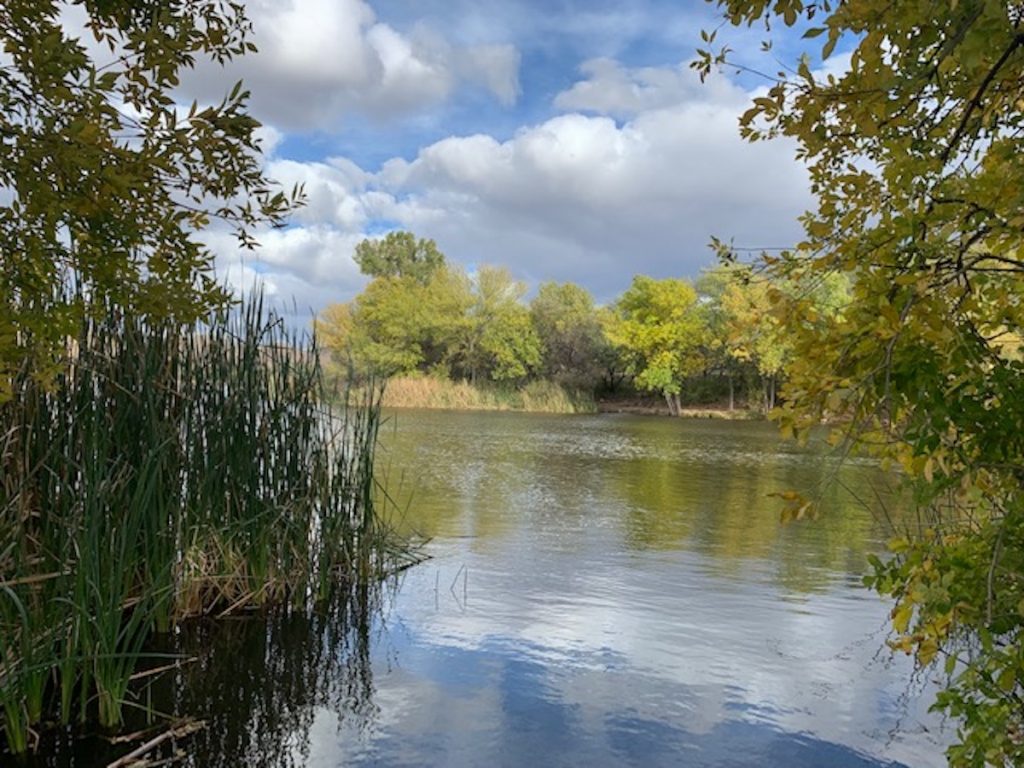 Welcome to our autumn On the Road series, as you share in the tales of Cactus Kate and Bajada Bill. So far we’ve traveled through Oregon, visited friends in Nevada, and camped in our beloved Eastern Sierra. Join us for this leg of the journey, which takes us from the Palm Springs area to Arizona. I am at the Patagonia Library typing this story. The wifi connection is fickle.

Leaving our Keough’s Hot Springs campground south of Bishop Oct. 27, we arrived at Whitewater Canyon Preserve near Palm Springs after 4 PM. We walked at sunset and noticed a rocket launched in the sky, whose jet trail left a heart shape on the horizon. We learned it was a SpaceX rocket with Starlink satellites launched from the Coachella Valley.

We watched the sunrise the following morning, walking out in the canyon meadow and lucky us, there was a bobcat waiting for breakfast at a rodent hole. It gazed at us with a wise expression.

The following morning we visited a short while with our long-time friend Renee (who I met the same day as Bill Nov. 10, 1973), and her sister Shevaun, where they were staying at the posh Marriott Resort at Shadow Ridge in Desert Hot Springs. It was 82°as we left that morning.

We pulled into Usery Regional Park near Mesa AZ that afternoon. The campground is well cared for and scenic with its saguaro, octotillo, cholla, barrel and other varieties of cactus. Framed by the Superstition and Goldfield mountain ranges, the campground is a scenic natural respite from the busy Phoenix metropolitan/suburban area.

The following morning we met with my niece Renaya, and her teen sons Quinn and Reid. They live nearby in Mesa and are my late brother Bob’s daughter and grandsons. We love being with them.

We hiked the Wind Mountain Trail, 1.5 miles uphill through layers of granite, tuff and basalt. A popular trail, we estimate about a hundred others walked the trail that Saturday morning. While taking a snack break, the local ranger pointed out a male tarantula. He was recognized for his ‘blond’ light brown hair. At this point in his life, the spider was literally starved for love. When ready to mate, the male stops eating. The males live only 2-3 years, we learned, while the female can live up to 25. Often times the male is eaten after mating.

Later we met with Mar, our late friend Urashan’s daughter at Intentional Foods, a GF eatery with delicious food. We all ate a quinoa-chicken sausage-kale dish, which was tasty and hearty. We listened to Mar’s stories of family and life in Mesa, where she works as a counselor.

Renaya told us about the appealing Saguaro Lake nearby our campground. The public beach is at Butcher Jones Beach. Swimming there was pleasant, framed by the rising mountains and desert scenery. Its water temperature was near 70°, much warmer then the reported 54° at Goss Lake where I swim with my fellow mermaids. Here cow birds sing much like Hawaiian Mynah birds.

The following day, after visiting Proof Bread in downtown Mesa, where Bill bought delicious sourdough bread made with a starter named Harriet, we visited his brother John and his wife Gail in Scottsdale. Sitting out on the patio enjoying Gail’s quiche, we talked of a recent storm which blew down a neighbor’s concrete wall and their palo verde tree.

After visiting with Bill’s family, we drove a half hour to Cave Creek, a cool hippie/biker/cowboy town. We enjoyed early dinner at The Grotto Cafe, an eclectic outdoor cafe with good pub food and live music. On this day we enjoyed the talented tunes of the Wallens, a Michigan-based singer-songwriter couple.

On Halloween we left our campground, heading for Catalina State Park in Tucson. On the way, we met with our friends and former neighbors, Shirley and Matthew Brencick. They took us for lunch at the excellent/hip Blanco Cocina Cantina in Phoenix. Sam our waiter took great care of us. We enjoyed talking about politics, art, people we share in common, and everything else. We are fortunate to have them as friends. We like Phoenix’s downtown. It is clean, mostly graffiti-free, and has interesting murals and museums.

Later that afternoon, we pulled into our campsite #82 in the A Loop, away from the sardine big rig camping of B Loop at Catalina State Park. Camping across from the bathroom was a great luxury.

That evening we took my Uncle Orland and cousin Julie out for dinner at Carlotta’s Authentic Mexican, nearby camp. Orland recently underwent two neck surgeries and his nurse daughter Julie was out to care for him in the aftermath. A force of nature is my cousin! She allows no disagreement. Her companion dog Lyra, a Norwegian Elkhound, is a smiley dog who enjoys attention.

The following morning, we walked along a 1.5 mile birding trail within the state park. Signs told us of the Big Horn fire, lightning-caused, which roared through the canyon in July 2020. Since then green has returned, especially with the soaking monsoon rains in September.

The Biosphere 2 in nearby Oracle gave us hope for the future as we toured its campus, where, in the 1990’s, eight people lived inside it for two years. While they eventually required an infusion of oxygen, the group learned about creating self-contained environments, which are now used on space stations. Since the University of Arizona has taken over running the campus, the emphasis has shifted from creating livable environments in space to being the world’s largest controlled environment dedicated to understanding the impacts of climate change. While we visited, the Inter Academy Partnership was convening there, seeking solutions to world hunger. Its membership includes 140 national, regional and global member academies which seek evidence-based solutions to the world’s most challenging problems. They met for a triennial conference. They brainstormed ways to harness knowledge for sustainable societies.

We ate lunch at the Oracle Patio Café and Market. It’s just our style, with original menus, and to Bill’s delight, fresh pies. He raved about his chili relleño and I loved my gluten-free grilled cheese with bacon and chili aioli.

Later at Oracle State Park, fate brought us together with the folks attending the Inter Academy Partnership conference at Biosphere 2, some from as far away as the Congo, who had arrived from Biosphere 2 via tour bus. Speaking with one of the group’s moderators, we were impressed by their focus on world building instead of world destroying. He told us how they networked with international partners in early morning and evening, a scheduling miracle, considering international time zones. If only their focus could appear on front page news.

Oracle State Park has a number of hiking trails. We chose the 1.5 mile Granite Ridge Loop. A challenging uphill climb with vistas of the mountains, we spent 90 minutes on the trail. At its peak, we were warned of a steep descent for the remaining half a mile. Thank the gods we carried our late friend Fred Bixby’s walking sticks while descending the gravelly steep trail. With the park closing at 5 pm, we exited the trail with half an hour to spare, glad we didn’t sprain an ankle along the way. We were the only car left in the parking lot as we exited.

We barbecued steaks at Uncle Orland’s and talked story, reminiscing about our family history. After dinner I was asked to choose from some beautifully embroidered linens my late Grandma Grace made years ago. Orland’s mother was a great friend and inspiration and I feel like she’s with me when I see her artistry.

Back at our campground we showered at the posh bathroom in Loop B. Under the bathroom lights outside, I watched the unfolding drama of a stink bug, a scorpion, a praying mantis, and a green grasshopper. The scorpion hid in a crack, pinchers and tail raised for the hunt. I shooed the grasshopper away so the scorpion could not strike it. A stink bug wandered into the scorpion’s field and it struck. The stinkbug raised its tail end and let out its defense juice. The scorpion backed off. Later Bill swooned over his cherry pie from the Oracle Patio Cafe.

We left our campground in the rain Nov. 3. We breakfasted at Tumerico’s vegetarian cafe in the Sam Hughes neighborhood of Tucson. We bought provisions, including puttenesca sauce from Flora’s Market Run across the street. That night we enjoyed it on spaghetti. We’ll have it again tonight with good red wine.

Our home for the next six days is at Patagonia Lake State Park, which is completely reserved, perhaps to fisher folk, whose daily catch limit is 4 trout, 6 bass and 10 catfish.

We walked along a birding trail near camp admiring the dove gray does grazing in the mesquite forest. The rain clouds were gathering and we headed for the shelter of Marion. We pitied the folk in the tent nearby in the downpour.

Today is Nov. 4. We breakfasted at the Gathering Grounds Espresso Bar and Deli in Patagonia. Excellent-love-made food! The population is less than 800 here. We listen to community radio, KPUP, 100.5 on your FM dial, rocking the border.

Now I’m sitting on the patio outside the library finishing this week’s blog. I’m told the nearby copper mining poses a threat to the area’s groundwater and wildlife. The Patagonia Area Resource Alliance promotes the well being of its citizens and maintaining the integrity of the area’s water, and air. It is said the copper mine expansion will pollute the air and water with sulfuric acid. Stay tuned…