On the Road Autumn 2022-Langley to Ashland OR 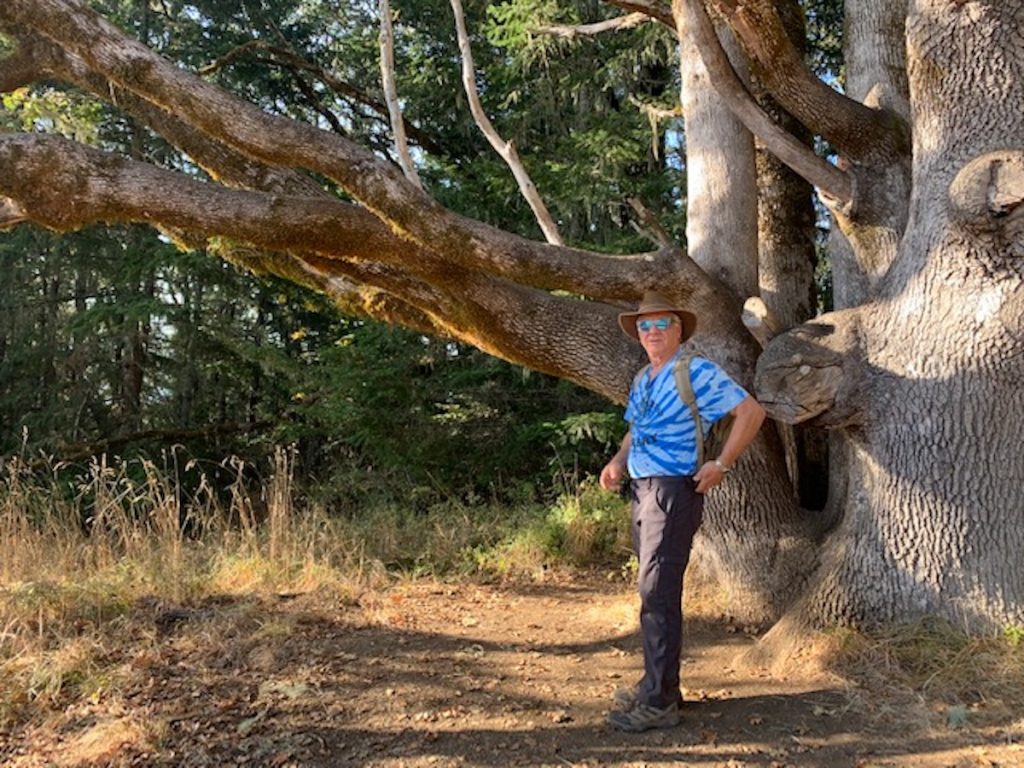 Bill and a venerable oak at Fitton Green County Natural Area in Corvallis OR. Photo by Kate Poss

It’s already the fifth night of our road trip, and at the moment, we’re camped at the Ashland Creekside Campground & RV Park in space 24. Except the creek is dry. The wifi is super here, compared to its nonexistence at the KOA-Albany campground where we spent the last three nights.

Anyway, welcome to our autumn road trip with Marion the 1979 Trillium Trailer, and Beatrix the 2022 Toyota Highlander Hybrid. We are Bajada Bill and Cactus Kate, out for an adventure until Dec. 16. The gods provided us in a timely way with a lovely couple who are staying at our home, caring for Ollie our orange cat and our five fish who live in a 50-gallon aquarium.

It was a cool morning the day we left Langley at 11 AM. Our mileage read 15,370, and it was smoky outside from the Bolt Creek Fire, which has caused itchy eyes and sneezing the past five weeks.

We stopped at Steel Lake Park to visit with our friend Michelle, who had lost a son last week. We hugged and listened to her pour her heart out. She said she was there when he was born and she was with him as he passed away, peacefully.

We spent the night just south of Olympia at Millersylvania State Park at campsite 220, among the tall fir and cedar. It’s a good place to camp, very family friendly. Clean bathrooms.

The following morning the outside air temperature read 90° as we drove south on I5 toward Corvallis OR. The Cedar Creek Fire, one of multiple wildfires burning in Oregon, rendered the air quality hazardous to breathe.

It was our daughter Gillian’s 33rd birthday October 15. Her roommmate Robbie supplied Chinese food. Bill and I brought by some barbecue and delicious apple pie and chocolate cake from the First Alternative Natural Foods Coop on Grant Avenue. Can’t believe our girl is 33 already. I still remember the day Bill drove me to Westlake Hospital in Southern California, and wanted to stop to pick up some orange juice on the way there. I told him I was in labor and we needed to hurry. It was a beautiful fall day.

Back in Corvallis, we took Gilli for breakfast at Eats & Treats Cafe in nearby Philomath. The place is a BBQ/breakfast place that serves delicious food. The restaurant is a dedicated gluten-free place and run by Sandy and Lynda McHenry. Sandy is a local rancher, and Lynda is a retired travel agent. Sandy’s mom Dorothy’s art graces the walls. It turns out Sandy and Lynda are friends with Langley artist Diane Divelbess.

I emailed a mutual acquaintance, Joann Quintana, who knows Diane and she connected us. In a recent email Diane wrote: “Serendipity lives! Kate, how wonderful you had a chance to meet the McHenry’s in the warmth of their Oregon cafe. Dorothy Sweet Downing was my buddy when we were officers in the Pomona Valley Art Association during the Jurassic Age—to wit—we rotated the art shows of PVAA members at all the banks in Pomona on a monthly basis. Dorothy had worked for the Covina Hospital for years, and began painting on retirement. By then she had married an attorney, George Downing, and they lived in a wonderful house in San Dimas, surrounded by citrus groves. I enjoyed many wonderful dinners with them. Her first husband was Sandy McHenry’s father. When we were all living in Southern California, Sandy did mostly ranching and Lynda was everyone’s travel agent. They’re such a great couple; I am so happy you met them!”

Both Corvallis and Philomath are friendly towns with many good-natured people running their businesses. Gilli works at Beggs Tire & Wheel in Philomath, changing tires big and small, on semis, dump trucks, trailers, and Teslas, and everything in between. Her work crew is like family and she enjoys the community that owner Luke Beggs has cultivated. You talk to anyone around and they all tell you they get their tires at Beggs.

After breakfast we took Gilli’s dog Cocoa for a run at her co-worker’s grandparents’ ranch. Cocoa was in heaven, running and sniffing all the great wild outdoors scents.

Later we visited Jim Garah, Gilli’s roommate Robbie’s father. Jim’s home is a kind of geology/art museum, tribute to history, and a way station for wandering spirits. His collection of African masks and figures rivals what I’ve seen at the Seattle Art Museum. His collection of stones and minerals is a treasure chest and he has spent time arranging them artistically. Jim holds forth in a steady, unbroken monologue on the Kalapuya indigenous people of the area, the sacred nature of petrified wood, obisidian—which he has flaked into arrow points, his work teaching with the Oregon-Alaska arts commissions, leaving a legacy for his two sons and granddaughter, finding gem-quality stones while traveling with his sons years ago in Eastern Oregon, his participation in the early Civil Rights marches in Selma, AL, and… Fire at Eden’s Gate: Tom McCall and the Oregon Story, and to “be sure to check out page 351 and the chapter about Grasping Wastrels.” Tom McCall was a journalist, and politician. He is considered Oregon’s most influential governor and was credited with shaping the identity of modern Oregon.

Wow!! I get breathless just recalling our 90 minutes with him. Jim is 77 and processes interesting and important information at record speed. Never met anyone like him. A particularly poignant moment was when we were sitting outside his gem-art shed. He began reciting his prayer–a blend of Hail Mary/Our Father, mixed with an homage and prayer for the Earth’s well being. Meanwhile, he’s hoping to sell some of his own art—clay dishes with Kokopelli scenes, and other nature motifs, as well as some of his African art collection.

Gilli suggested we visit the Bruce Starker Arts Park nearby where she lives. The park features a restored wetland and boardwalk. We saw half a dozen nutria swimming in the Dunawi Creek. They look like small beavers and their tails are long and  pointed, rather than flat and paddle-like. They swim and munch with no mind to the humans observing them. They were introduced by fur farmers and imported from their native South America. They can eat up to a quarter of their body weight daily.

On our last day in Corvallis, we met Gilli for her lunch break from Beggs Tire. While ordering coffee at the nearby Timber Towne Coffee she saw a Beggs customer, a high school teacher, whose class is rebuilding a car to sell and benefit a family in need. They chatted. We drove her back to work, where an elderly dump truck that is used to haul cow manure pulled in and it was Gilli’s job to repair its tires. She and Laurie, the tire shop’s warm and friendly front desk woman, exchanged jokes about ‘Big Stinky.’ I’ve got to admire Gilli’s role in the tire trade. She’s strong. She maintains her art in another business she started, creating logos for clients in embroidery.

Monday afternoon we drove to Fitton Green County Natural Area. It has terrific views of the coast range and venerable oak trees with long reaching arms. As we stood admiring one oak, a character came driving up with his buddy on an ATV. The driver talked non-stop about his great-aunt who once owned the property, thousands of acres—once in the Howard family. Now, part of it is trust land property. The old-timer told us he wouldn’t buy his tires anywhere but at Beggs. The guy’s companion, didn’t say much, but drank Mountain Dew and ate gummy worms.

We enjoyed GF pasta that evening at Pastini in Corvallis. Locally-sourced ingredients makes the meals taste home made. The staff is friendly and down to earth. We brought spaghetti and meatballs dinners for Gilli and Thomas, who had just returned from a hard days’ work at Beggs. Thomas is one of Gilli’s roommates, along with Robbie and Elle, cats and dogs.

Back at the KOA, I sat in the laundry room trying in vain to connect with wifi while our clothes tumbled in the dryer. A 31-year-old Navajo man had arrived to remove his work clothes from another dryer. I had asked about the calligraphy tattooed on the inside of his left arm, which read Dinè. Turns out he is from Farmington NM, was trained as a welder and works all over the country. He and his wife and 12-year-old daughter like Oregon, but live near Bend while he travels on welding gigs. I learned of his accident where his car was totaled by a woman who ran a red light. His shoulder was injured and he can’t do aerial-welding work until his shoulder heals and his range of motion returns. He said he was once terrified of heights and showed me videos of his feet walking on steel girders high above the ground. Now he said heights give him an adrenaline rush. He is connected to a safety harness while working on high. His birthday is Nov. 24, like Bill’s. Meeting Adrian at the KOA was the best part about camping there. We could tell he was lonely for his family, by the way he talked about missing them.

We left KOA-Albany Oct. 18 at 8 am and drove south on I5 through fog so thick we could only see a quarter mile all around us.

Celebrate our Hometown Heroes at their book launch October 23