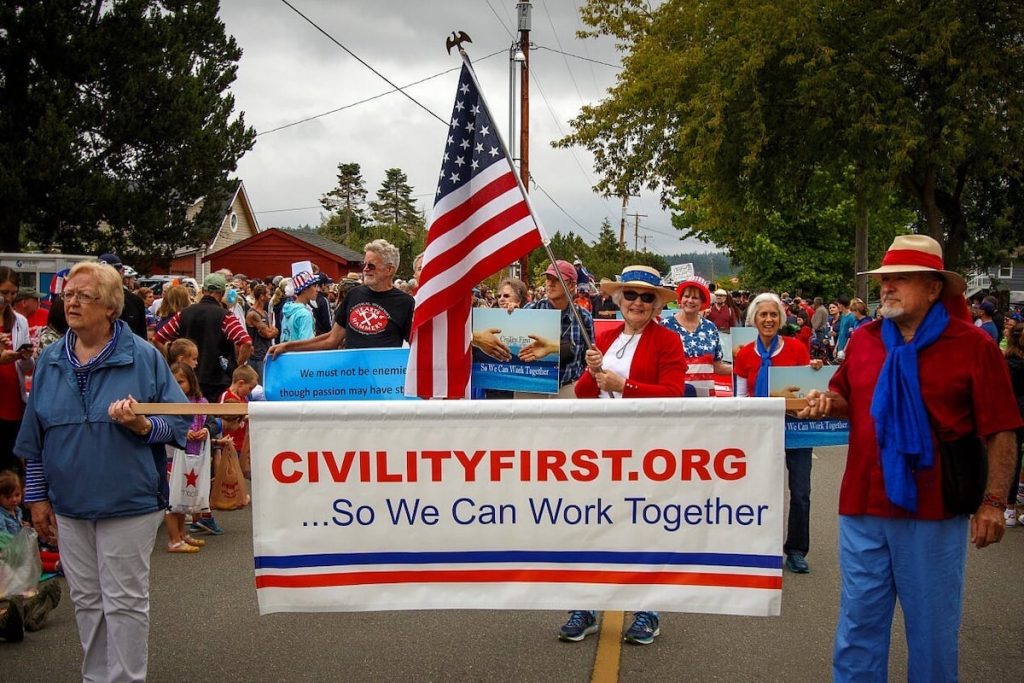 October is Civility Month. Civility First, a grass roots movement promoting courteous private and public dialogue, is hosting a number of workshops and an art contest.

Note: After this story was published I, Kate, had an opportunity to practice the skills I learned from last week’s conversation on September 28. While waiting in the service lounge at Frontier Ford in Anacortes October 4, a woman engaged us in conversation. It began with her wanting to turn on the dark tv in the room. She asked if we would mind if she watched the news. We told her we would mind, as there is a lot of bad news on. She was from Los Angeles, as are we. She talked of former president Obama as someone she voted for the first time, but felt he was a racist in the second term. She talked about the importance of owning guns. I mentioned writing this story and how important it was for me to stay connected in conversation and to let her know I thought differently. Rather than turning away from her, my husband Bill and I engaged her in conversation. It was exhilarating! As we parted, she was happy I spoke my own mind and cared enough to engage her. She hugged me and said meeting us gave her hope. Wow!!!

Sharing this news with Kate Bracy, Civility First’s board president, via email, she commented: “I know what you mean. That is actually why I make curiosity and civility a ‘practice’ in my life. I’ve seen and felt again and again the power of connecting while standing my ground. It’s life-changing, if you let it be. See how your whole body understood a good thing and connected people? (Kate Poss–it is true, my body felt good after the talk.) I want more people to know and feel that difference. 🙂 The people you spoke with today will remember the interaction. These small interactions change trajectories–personal, national and political. I’m praying and hoping for such trajectory changes in climate policy and international conflict. Truthfully, ‘hope’ is the whole reason I do this work at all. It keeps me from despairing.”

Meeting with Celia Schorr, executive director, and Kate Bracy, board president, at the Commons Cafe & Books the last week of September, we talked of available tools to bridge our differences in everyday and public discourse. We talked of safety, of defusing an intimidating person and maintaining one’s integrity in the face of someone who wants to disregard it.

“I am new as the executive director,” Celia Schorr said. “What I’ve learned is that people come to our workshop because of something personal where they have hit a roadblock. Sometimes it’s politics, or COVID, often it’s personal, a conflict with family members. Sometimes a colleague. Sometimes there are problems in homeowner associations they can’t resolve. People dig into their corners. What I’ve learned is that having a civil conversation is about being curious rather than judgmental. Respecting the humanity of the other person.”

A friend who serves on Langley’s Dismantling Systemic Racism Advisory Group, suggested asking how one remains civil, when, as Black writer James Baldwin once said: “We can disagree and still love each other unless your disagreement is rooted in my oppression and denial of my humanity and right to exist.”

“There’s emotional violence that is inescapable,” Kate Bracy noted. “What I love about our workshops is that they help you feel like you can manage what comes up. They’re great stress reducers. I refer to communication as a ‘martial art.’ “The more you practice simple moves, the more easily you can handle tricky situations.”

Kate spoke about tools we can use in difficult conversations in a past Sno-Isle Tedx talk: “Learn How You Can Stay Civil Most of the Time.”

One of the tools, Kate said, is “Taking a deep breath. Another is having the courage to look another in the eye,  ask, ‘are you interested how I see this differently?’”

For the blowhard who knows all? Kate suggested, “Stop the conversation by paraphrasing it. ‘Do I have this right?’ Say what you’ve heard. It takes some of the air out of their sails. If they agree, you pivot the conversation. That allows them to see you are connecting and acknowledge what you’ve been saying.”

Meanwhile, Civility First is hosting the following workshops this month.

The public is invited to register for the upcoming events:

Oct. 4 at 6:30 pm. “Bridging our Differences.” Do you wish you could: have conversations with people who disagree with you? Find a way to start a tricky conversation respectfully? Stay civil without giving up your beliefs or opinions?

Oct. 5th, 6:30 p.m. in person at the Coupeville Library and Zoom: Brandi Kruse of [un]Divided on “Journalism and Civility in 2022.” According to the website: “Brandi Kruse is an Emmy Award-winning journalist and political commentator. After nearly a decade with the FOX affiliate in Seattle she left to launch [un]Divided, an independent political show and podcast that gives a voice to Americans who have been drowned out by the fringes. Brandi is a Minnesota native and graduate of the College of Journalism and Mass Communications at the University of Nebraska. She lives in east King County with her fiancé, two rescue dogs, and an old cat named Edison.”

Oct. 8th, 6 pm at Unitarian Universalist Congregation in Freeland and on Zoom: Elizabeth Doll of Braver Politics on “The time for talking isn’t over: How workshops that restore trust depolarize America.” Elizabeth Doll is the Executive Director of Braver Politics (a project of the “Braver Angels” organization). Doll is an experienced political campaign professional and is heading up a national effort to depolarize our politics and remake our political culture from the ground up in a spirit of trust, citizenship, and good-will.  Doll has worked closely with people across the political spectrum and will discuss the latest research into working across the political divide, her work with both “Reds” and “Blues” here in Washington state, and more. The U.U. congregation asks that attendees be vaccinated and masked.

Oct. 11th, 6:30 pm, Zoom only: Author Paul Courteau on “Can You Resolve Conflicts Without Fear?” Courteau, a therapist and the author of the Safety Model of Conflict Negotiation, will show participants a practical model for solving personal disputes and discuss how the method evolved over many years of active real-life application.

Oct. 15th, 6 pm, Zoom only: Authors Bill Keith and Robert Danish discuss their book, “Beyond Civility: The Competing Obligations of Citizenship.” They’ll discuss the difference between “Weak Civility” and “Radical Civility,” the basic principles and steps for practicing radical civility, and how we might use radical civility in a range of different settings.

Oct. 18th, 6:30 pm, “Bridging Our Differences Workshop.” Do you wish you could: have conversations with people who disagree with you? Find a way to start a tricky conversation respectfully? Stay civil without giving up your beliefs or opinions?

Register by clicking here, or contact civility1st@gmail.com to schedule a workshop personally or for your organization.

Why Ancient Wisdom Matters in the Modern World