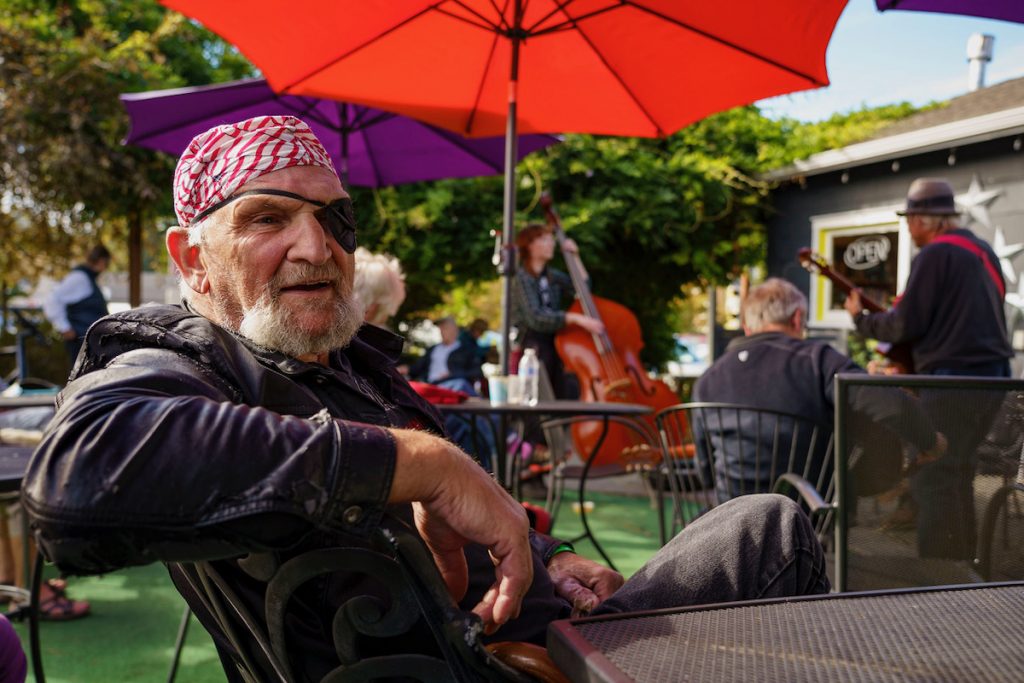 David Welton was in his element Sept. 21-25, shooting photos of musicians gathered for the 22nd annual DjangoFest NW 2022.

Whidbey Island Center for the Arts hosts and produces the festival, which draws international bands, and local talent such as Hot Club of Troy.

French-Romani jazz musician Jean ‘Django’ Reinhardt was born January 23, 1910, and went on to create a legacy as a premier jazz guitarist. His work is celebrated in festivals worldwide, including Langley’s annual DjangoFest NW. Ours is a festive event with musicians playing at local cafes, the sound of Paris in the air.

Django’s unique blend of gypsy music evokes visions of Parisian cafes, delicious food, love and dancing. Despite being burned over half his body in 1928 and losing the use of the ring and pinky fingers of his left hand, he willed himself to relearn his craft. Though doctors told him he wouldn’t play again, Django Reinhardt relearned playing on a guitar his brother bought him, composing music and gaining an international recognition as a renowned jazz artist. With his colleague Stèphane Grappelli, Django formed the quintet, du Hot Club de France,  which became a popular nouveau jazz band.

Then WWII hit Europe. And Django Reinhardt had to adapt in a culture where his people were enslaved and exterminated.

Adolf Hitler believed jazz was counterculture, though he didn’t ban it entirely. He held as much contempt for the Romani people as he did the Jewish people. According to this Wikipedia link: “Beginning in 1933, all German Romani were barred from living in cities, herded into settlement camps, and routinely sterilized. Romani men were required to wear a brown Gypsy ID triangle sewn on their chest,  similar to the pink triangle that homosexuals wore, and much like the yellow Star of David that Jews had to subsequently wear. During the war, Romani were systematically killed in concentration camps. In France, they were used as slave labor on farms and in factories. During the Holocaust an estimated 600,000 to 1.5 million Romani throughout Europe were killed.” Meanwhile, Django tried to escape from France, was captured, and saved by a jazz-loving German officer. The artist later composed a tune, Nuages, which became an anthem for the French, a song which evokes a longing for liberation.

With that legacy in mind, one can appreciate the poignancy of the music, and what it meant. In the streets last weekend, that bittersweet quality was there. We know the dark days are approaching, yet we took a moment to savor the sweetness of the autumn light, feel the longing in the music that fills the air, and connect with friends.

At the Commons Cafe & Books