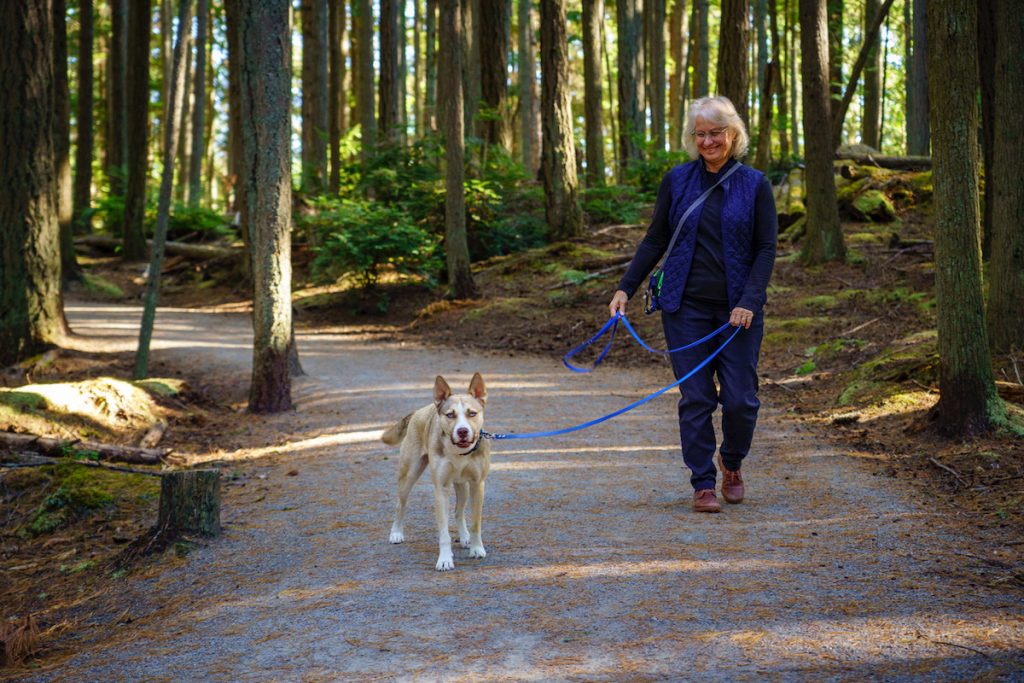 Once afraid to go walking on a leash, Trek now feels comfortable taking walks with his foster mother Kathryn Hurtley. Kathryn and her husband Kevin agreed to foster Trek after reading about his need for a home last February

Kevin Hurtley was working in Alaska last February when he read a story in the South Whidbey Record about a Husky-mix dog named Trek who needed a home. He phoned his wife Kathryn Hurtley on Whidbey Island and mentioned how the dog’s wild, blue-eyed gaze had struck a deep cord.

Kathryn Hurtley then learned that the young feral dog, his siblings and mother, were found in 2021, barely surviving, emaciated and flea-ridden, in an eastern Washington cornfield. Red Waggin’ Rescue, a non-profit pet rescue service, found the dogs and looked for folks to foster them. Soon after, Lyn Kiernan, a Red Waggin’ Rescue volunteer living on Whidbey, arranged for Trek and his family to be cared for. Kiernan took in Trek’s mother Meridia, a full-bred white Husky. Lynn and her husband Paul have since applied to adopt Meridia.

“The article and photos spoke to me; the dog needed help,” Kathryn Hurtley said, while standing in a fenced pasture on a September Sunday, watching Trek romp and wrestle with his mother, and siblings, Tanto and Tundra, at Tanto’s home. Jacque King adopted Tanto, which means ‘little sword’ in the Japanese language. Karen Wolf and her wife, Deb Wolf, adopted Trek’s sister Tundra.

In the past seven months, Trek has evolved from the fearful dog he once was. While his siblings and mother were learning to adjust to living with humans, Trek had a harder time coping with his new world. He was the last to be rescued from the cornfield. He trusted other dogs, but was extremely wary of humans. The foster moms, with the help of their friends, took turns working around the clock to socialize Trek for several months at a cottage owned by dog trainer Maureen Fitzpatrick, founder of 7 Cedars Dog Training. When the cottage became unavailable by March 1, Trek’s team of foster moms reached out to find help. Their prayers were answered when Kathryn Hurtley agreed to provide  a home for him.

Kathryn took a chance last March on fostering Trek, and told Kevin to expect a dog living in their home when he returned from Alaska.

“He was terrified,” Kathryn Hurtley recalled of Trek when she first brought him home. He had been kenneled following 24/7 foster care at the dog cottage for several months. “He had been kidnapped from his world. He wouldn’t get in a car. He wouldn’t get out of his crate.”

“We were all able to help her,” Lyn Kiernan said. “Trek stayed connected to his pack. We met for family outings. We took him to public places. He got used to being in different surroundings. Little by little he started going up to people. Trek loves swimming in pools and open water. He’s great at the beach with his friends.”

Kathryn Hurtley recalled it took a few months for Trek to feel comfortable enough to walk from his crate through the sliding door at her home, and about four months for him to feel comfortable getting in her car. Nowadays he knows that car rides usually mean something fun, like playing with his dog family or running with newfound buddies at the Marguerite Brons dog park on Bayview Road in Langley.

“At the park mentor dogs show him how he can play,” Kathryn Hurtley added. “It is a joy watching Trek grow and learn. His favorite thing is to play. When he gets that joy, god, it is fun to watch. Now he walks on a leash. The crate is gone. He sleeps in our bedroom. His ability to learn commands has been impressive and makes taking him places enjoyable for both of us. He knows,  ‘Leave it, sit,’ and other words. He is very trainable and wants to learn. As our communication improves, his confidence builds. He expands his world.”

Jacque King, who lives in a big ranch house with horses, chickens, bunnies and kids, adopted Tanto soon after he was found and held in a cage at the nearby Connell Police Department Impound Kennel with his mother and siblings. She recalled bringing Tanto home:

“He was scared and had no prior interaction with humans,” King said. “My other dog Bodhi, who I’ve since lost, filled in the gap, showing Tanto we could be trusted and taught him how to be among humans. Tanto is a lovely dog, sensitive and very attentive. When Bodhi had seizures, Tanto would lick his face afterward. He showed so much empathy.”

Of his family, Trek was the most traumatized, King noted.

“We focused on Trek—Lyn, Debra, Karen and me. He was the most fearful. We worked with him 24/7 at Maureen’s. Then, Kevin and Kathryn saw the article and said, ‘We need to help and foster this dog.’ But it was another transition to two new people. Together they have done amazing work. He now has dog friends and people friends. His social skills have improved.”

Kathryn Hurtley said Trek is now ready to be adopted, though, she’s not in a hurry to see him go. “It isn’t a fire sale,” she noted. “I want him to to have a better home, one with active people. He should be a big focus of their lives. He’s not for someone who goes to Seattle and works all day and leaves him in the yard. He’s part Husky and he wants a pack. It would be great if he had another dog to play with.”

Trek and Kathryn have created a bond. He wakes up and likes to cuddle. He waits while she has her coffee and then they often go to the dog park, because he needs to exercise and play with other dogs.

Adding that she would be glad to work with a new family who  wishes to adopt Trek, Kathryn said, “He’s loving and independent. He is not a lap dog. If the adoption doesn’t work out he’s welcome to come back with us. If I would turn into a dog, he’d be so happy.”

To inquire about adopting either Tonka, Trek’s brother, who is being fostered by a trainer in Poulsbo, or Trek, contact Red Waggin’ Rescue’s Carrie Adams, who has coordinated the dogs’ rescue from the start, at connellpetrescue@gmail.com. Click on Red Waggin’s Petfinder link to learn about animals available for adoption