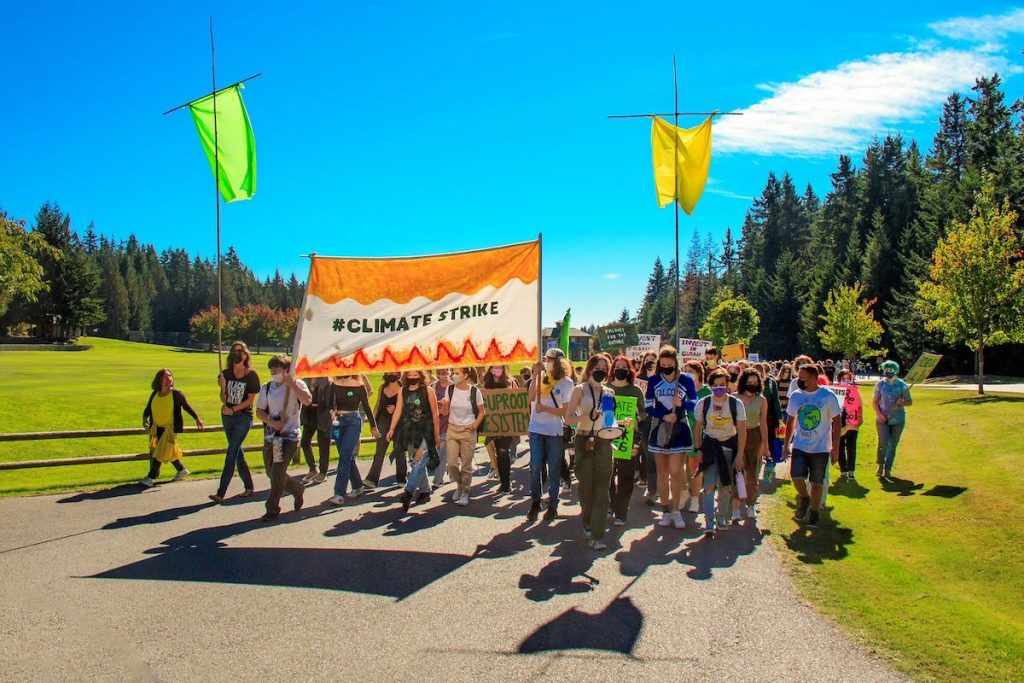 USL is a youth-led social and climate justice organization which formed in 2019. Their influence led to an expanded curriculum, which included new ethnic studies, environmental science classes, and a broader sex education class, which covers a spectrum of orientations.

Additionally, the students successfully petitioned the City of Langley to declare a climate emergency. As a result, the city created a Climate Crisis Action Committee in 2021. USL members have worked to get similar support from Island County’s board of commissioners.

“If they were to declare a Climate Emergency that would be a big step toward accountable climate action within Island County,” Torrey Green, a USL member, wrote in a press release prior to the board meeting.

USL submitted its climate emergency resolution last April for county staff to review. While many of USL’s requests were granted Sept. 6, the board stopped short of unanimously voting to declare a climate emergency at this time.

Board Chair Melanie Bacon, District 1 commissioner for Central and South Whidbey Island, replied in an email following the vote: “I know the resolution we passed this week does not go as far as many people would like (including me). But what’s particularly significant about this week’s resolution is: it was unanimous. [We] unanimously passed a resolution acknowledging that climate change is impacting our islands and we must work to ensure our resiliency into the future by implementing behavioral and structural changes. The next step will be to identify what those behavioral and structural changes will be.”

Commissioner Bacon added that climate change is a serious threat and seeks resolution by year’s end.

“I believe that climate change is the existential crisis of our lifetime; and in my view, the action we took on Tuesday was one of the most important votes of my tenure, second only to the upcoming votes we will take on designing and implementing a climate action plan for our county,” Commissioner Bacon wrote in an email. “My fervent desire is to pass a resolution by the end of this year that identifies our goals, and then work through 2023 to write and pass a Climate Action Plan for Island County that will ensure the achievement of those goals.”

A motion by Janet St. Clair, District 3, North Whidbey and Camano Island, to declare a climate emergency was seconded by Commissioner Bacon. Commissioner Jill Johnson, District 2, Oak Harbor, said in a following discussion that she was open to two of the USL-changes Commissioner St. Clair  wanted, but not the third, which was changing the title of the resolution.

“Hoping I was reading the situation correctly, I voted against Janet’s motion (even though I fully supported it),” Commissioner Bacon noted in an email. “Happily, Jill then made her own motion, which incorporated those two changes. That motion passed unanimously.”

Though contacted for comment, Commissioner Johnson did not respond by press time. At the hearing, available to watch on this link, she said that as an elected official, she must balance the tensions of multiple decisions and doesn’t have the luxury of being an activist, of having a single agenda like USL does. She said there are other priorities to address, like granting permits, working with local businesses and dealing with social health issues.

“There’s not one person in this room from District 2,” Commissioner Johnson said. “There’s not one business in this room [from Oak Harbor]. Are you [the students]committed to not having children, to not getting on an airplane? I did my part to not overpopulate the planet [by not having children]. I’m listening to behavior changes that needs to happen. It’s not at our level that it is going to be meaningful. There’s not broad enough buy in with this resolution. You’re shaking your heads at me thinking I’m the anti-Christ of America. [On the other hand] I have messages from people who think I’m a crazy train for participating in this. I know I talk a lot and I discount about 50% of what I say. A crisis says we have to suspend everything else to address this. I’m not gonna go crisis-y.”

Questioning whether the county’s draft climate action plan is enough to address climate threats to the island’s future well being, United Student Leaders posted on its Facebook page:

“[We are] left with many questions about what steps Island County will take next to strengthen this resolution in the coming months. Will the Climate Action Plan that is on the horizon be enough to preserve our islands? When will it be the right time for our elected officials to take concrete action? How will action be taken in the future, and who will be involved?”

Currently Island County’s draft climate action plan addresses the threat of sea level rise, which, according to a 2020 UW report, is estimated to increase by one to three feet by 2100. In that report, flooding of beachfront property and saltwater intrusion into wells is addressed. The county has passed resolutions to limit greenhouse gases and encourage installation of green appliances such as heat pumps for new home building.

Jackson Murphy was one of the four USL speakers who addressed the BOCC Sept. 6. He interned with Commissioner Melanie Bacon at her invitation over the summer and will continue volunteering with her office as his schedule as a high school senior allows.

The BOCC’s resolution as passed lacked the strength members of USL sought. In a press release following the vote, Murphy wrote: “It is quite discouraging to see this resolution being passed as a milder version. We do not have time for weak language, we need strong language so we have  clear direction that leads to strong action.”

Commissioner St. Clair, talking by phone Sept. 8, is up for re-election in November. She said: “I appreciate that Melanie wanted consensus. At the same time we could have passed this with two of us a year ago. It’s a tradeoff. I believe we’re in a time of crisis and we must act. Now we have a framework to build climate change into our policies and hold ourselves accountable. The climate crisis is a lens through which we will make policy. I picked up on work by (former) Commissioner Helen Price Johnson. [As a result,] we increased energy efficiency in our buildings, using LED lights, and using energy efficient vehicles.”

Meanwhile, Murphy will serve as a member of Langley’s Climate Crisis Action Committee, which meets on third Thursdays at 3:30 pm. Langley approved a resolution declaring a climate emergency June 7, 2021. USL initiated the request and successfully lobbied to have the resolution passed. The link below contains the committee’s recent report Sept. 6.

Linda Irvine, who chairs Langley’s Climate Crisis Action Committee, spoke at the Sept. 6 BOCC meeting. Declaring a climate emergency and forming a committee last year, resulted in Langley’s receiving over $1 million in state grants to help families get efficient heating and cooling and equip South Whidbey schools with solar panels, she noted. She urged the BOCC to make a strong statement and take action.

Meanwhile, United Student Leaders will march for protecting the earth in an annual Fridays for Future protest Sept. 30, one week later than previously announced.. This is Whidbey covered the event in 2021.

According to the article, climate scientists have identified the four tipping points as: “Slow but irreversible collapse of the Greenland and West Antarctic ice sheets, more immediate loss of tropical coral reefs around the globe and thawing of high northern permafrost that releases massive amounts of greenhouse gases trapped in now frozen land are four major tipping points…that could be triggered by half a degree Fahrenheit warmer than now.”