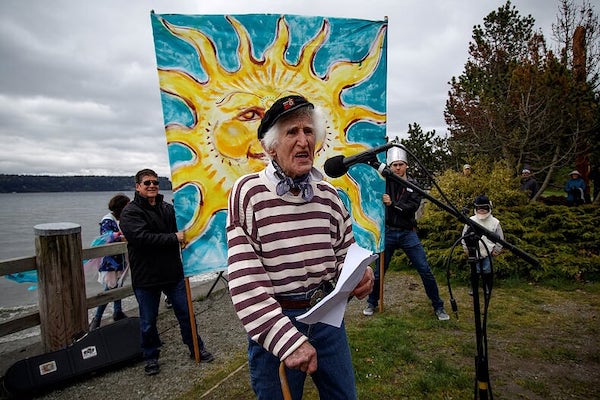 Peter Lawlor recites a poem at one of Langley's Welcome the Whales parades in years past. Photo by David Welton

While Peter Lawlor is no doubt playing his melodeon somewhere in the Great Beyond, friends of his gathered at the Sea Biscuit Bakery Saturday Aug. 20 to recall stories about a true Whidbey character who passed away Aug. 2, 2021.

Peter’s daughter Gretchen Lawlor organized a memorial for her father, a New Zealand merchant mariner, ski instructor, poet and musician, who moved to South Whidbey in 2000. Singing with the Shifty Sailors, publishing poetry, and performing for 16 years at the Mukilteo Coffee Roasters, whose restaurant is now the Sea Biscuit Bakery, Peter was Langley’s poet laureate. Flowers from friends’ gardens, photos of Peter in his earlier days, and Gretchen’s paper machè art comprised an altar to remember the man with the halo of white hair who always loved an audience.

At Saturday’s gathering, Gretchen—who moved to Mexico last year following her dad’s passing—and was back visiting the island—greeted friends and shared stories of her new life these days: visiting hot springs, teaching paper machè art classes, and getting to know the street sounds of a magical Mexican village. She said medical care is good there, waits for doctors are minimal, and costs inexpensive.

Gary and Beth Smith, owners of Mukilteo Coffee Roasters, stopped by Peter’s gathering and chatted with visitors. Gary once said Peter was like a father to him and queued his cell phone with videos of Peter’s most memorable concerts at his cafe. Gretchen set the phone on Peter’s altar and there was Peter alive again, playing a poignant version of Auld Lang Syne.

Fred Lundahl of Langley’s Music for the Eyes seemed to appear at the moment Peter appeared on Gary Smith’s phone. Fred and Peter shared a common interest in playing the concertina and became friends in 2004. In a previous story, Fred told of the time he flew Peter to Victoria B.C. in his plane and took him to a music shop where Peter fell in love with a melodeon. Peter eventually came to own it and played tunes on Saturdays at Gary and Beth’s popular cafe.

At Peter’s memorial this year, Fred brought out his concertina and played an homage to his friend: Fred Lundahl plays Auld Lang Syne

On an August morning two years ago, Peter sang some of his tunes. It was the summer of his 99th year.

Reminisce here with scenes of Peter’s life with these stories and David Welton’s photos: Now is the Hour, Peter Lawlor in his 99th year, and Peter Lawlor’s Last Ride-Perhaps.