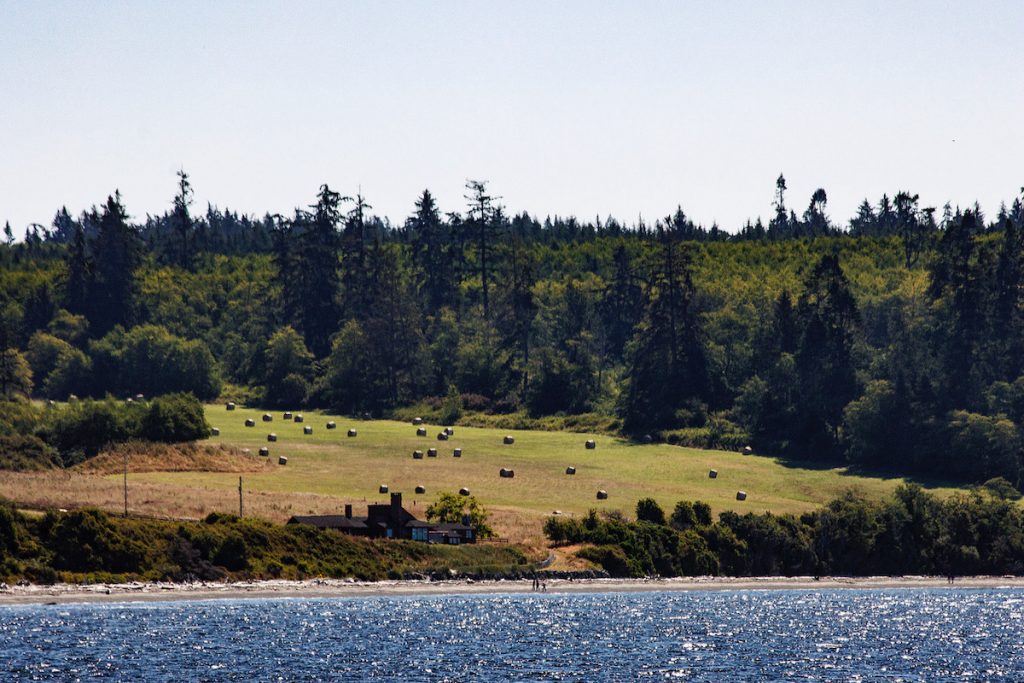 View of Keystone Farm and Forest Preserve as seen from Admiralty Bay. The 226-acre parcel was acquired earlier this year by the Whidbey Camano Land Trust. Beach access, a demonstration farm and preserved forest will be restored. Plans are to open the property to the public in 2024

“How would you like to wake up to this?” asked Pat Powell, sweeping her arm around a landscape of rolled hay bales in a farm field with Admiralty Bay and the Olympic Peninsula in the background.

The spectacular view was from the Whidbey Camano Land Trust’s new Keystone Farm and Forest Preserve, a fitting legacy for Powell, who is retiring this month as the trust’s executive director after nearly 20 years of working to preserve key Island County properties. At $9.1 million, the Keystone Preserve—175 acres of forest, a working farm, and two-thirds of a mile of beach near Coupeville—is the most expensive acquisition in the Land Trust’s history.

Saving scenic or sensitive properties has long been Powell’s passion. Before accepting the role as the Land Trust’s executive director, she worked as director of land protection for the Nature Conservancy office in Seattle, and before that she was a special land acquisition manager for the State Department of Natural Resources.

“Those were the golden years, the heyday of DNR,” she recalled. “I helped facilitate (state) trust-land transfers in San Juan and Island Counties, preserving estuaries and old-growth forests. Putney Woods and the Trust Land Trails (on Whidbey) are results of that time.”

“It’s been a privilege to protect land where you live,” she added.

Langley resident Cary Peterson, former Land Trust president, recalls the trust was a small non-profit with a volunteer board when it acquired Saratoga Woods in 2001. “On the heels of that purchase, it was clear we needed to hire professional staff,” she said. “We recruited Pat. We knew she had the skills we needed.

“She took it and went with it. What was wonderful, in addition to her other experience with land negotiations, she knew about the DNR trust-land transfer program. I remember her saying she would get every one of those. And she did. As a negotiator with private landowners, she had skills on every level from the most bureaucratic to the most personal.”

Since then the Land Trust has saved more than 10,000 acres of shoreline, tidelands, trails, forests, open space, farmland, and wetlands on Whidbey and Camano Islands. Tom Haensly, the trust’s attorney, says that success is due to Powell  and the staff she assembled.

Creating that “incredible team of people” was the most meaningful thing about her time as trust director, Powell said. “I love my people. We work by consensus. It’s hard to get the right mix,  and we have it.”

Haensly agreed. “She is unflappable,” he said. “It doesn’t matter what is happening; she is able to figure out the problems and solve them. She is creative and responsive to input from others. I’m in awe of her way of managing people. Wish I could have been that kind of leader. Pat has what it took to build the organization.”

Carrie Viers, associate director of the Land Trust, has worked with Powell since 2008.

“Pat leads as a colleague, not as a boss, and each person feels valued as an equal,” Viers said. “I continue to be amazed, every year, at the amount of work that is done by such a small group of people and I know that it is because Pat works so hard and leads by example. Her dedication to the Land Trust work is truly remarkable as shown by the growth during her tenure. She leaves a wonderful legacy and big shoes to fill!”

Powell has logged many miles walking Island County to identify key lands deserving of protection. Many people she meets have a deep love for the land and want to preserve its qualities for years to come, she said. “Farmers and older people donate conservation easements because they can’t bear to die, knowing their land will be developed. The Land Trust has an incredible legacy of land donated by regular people.” Preservation priorities established by the trust include wildlife corridors adapted for climate change, old-growth forests, and shorelines.

Powell is working to finish several projects before she retires at the end of August. After that? She plans to garden, walk on the beach, add to her collection of stones, and spend time with her partner, Mark, and dog, Pip.

David gets the shot he’s long waited for