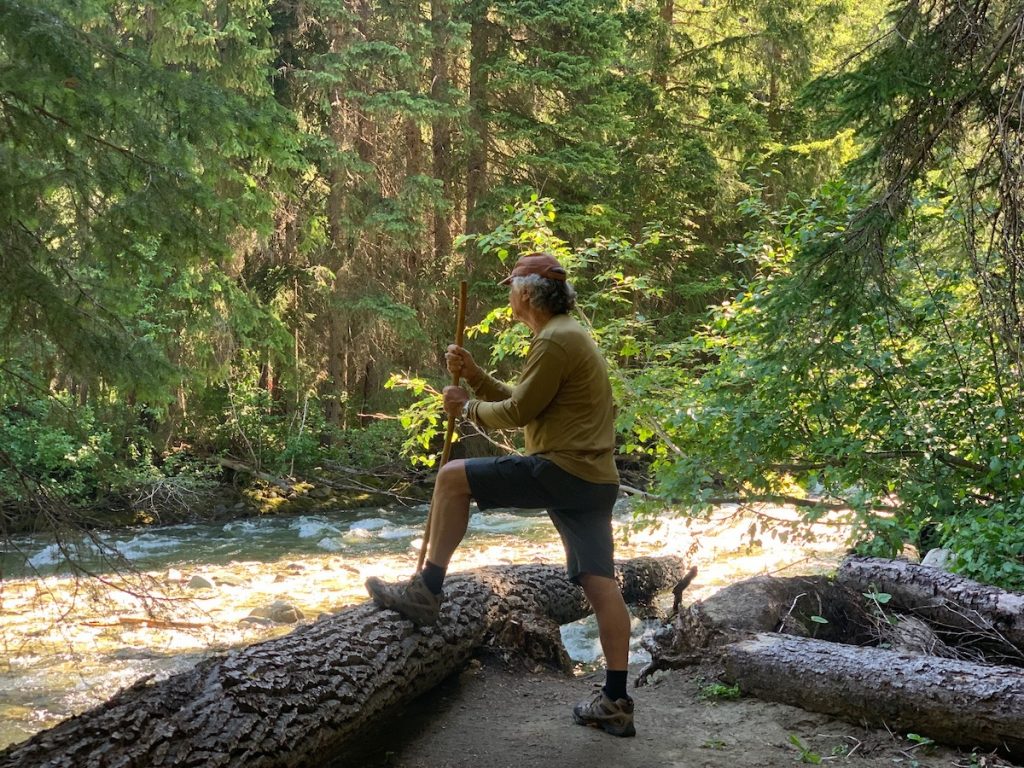 This marks the final chapter in our On the Road 2022 series’ spring and summer road trip with Marion the 1979 Trillium Trailer, and Beatrix the 2022 Toyota Highlander Hybrid. Every time we filled up the gas tank, we were grateful that Beatrix averaged 34 mpg, even when towing Marion. We felt Canadians’ pain at the pump, paying the equivalent of $8 a gallon. However the US dollar had a 30% advantage to what Canadians paid, so with that discount, we averaged $5.60 a gallon. We noticed our personal energy waning during the last few weeks of our journey, and we longed for home. We wanted our own shower, our own bathroom, and to be in one place once again with people we knew.

Leaving our City of Nelson BC campground behind on Sunday, July 10, we drove out of the temperate rain forest of the Kootenay Mountains, heading west on Hwy. 3. After more than three hours’ drive, we arrived at the Kettle River Recreation Area, where we were relieved to see spacious and clean campsites. As noted in our last story from Nelson, its city campground packed in campers like tossed sardines, the bathroom showers backed up, and toilets were clogged. Here at Kettle River were calm park rangers and super clean bathrooms and showers.

After 15 weeks on the road, the care of campground bathrooms was important to us. At Kettle River, we smelled the clean Ponderosa pine-scented air, enjoyed talking with camp neighbors and admired the Kettle River, a popular summer destination for Canadians wanting to cool off by floating along its calm rapids. Friendly campground neighbors suggested we drive to the small town of Rock Creek nearby and get some ice cream at The Old Schoolhouse Ice Cream and Local Gifts. Since temperatures were in the 90’s that afternoon, we visited the little shop and cooled our palette with fresh huckleberry ice cream.

While looking out Marion’s window that evening, we noticed six folks camped in tents throwing their plastic trash and beer cans into the campfire. In hindsight, we ought to have raised their awareness about burning plastic and beer cans, but sadly we did not. Signs at the entrance to the park told the story of a 2015 fire started by a tossed cigarette, which torched 3,750 hectares—about 15 square miles— and destroyed 30 homes. During that “tornado of fire,” which one resident called it, campers had to flee. The burned skeletons of Ponderosa pine surrounded the campground and climbed the nearby hills. Wildflowers bloomed at their feet. Fortunately trees in the campground were saved.

With reservations made months earlier for July 11-14 at EC Manning Provincial Park, we left camp driving west on Hwy. 3. Passing through the orchard town of Osoyoos, we stopped for breakfast at Smitty’s Family Restaurant. However, its indoor air smelled badly of old grease, the breakfast food on diners’ plates looked unappetizing, and a placard on the wall read, “The less I care the better I feel.”  Well, we did care, and returned to Beatrix, where we drove to Canada’s organic capital, Keremeos.

We stopped by the farm store, an organic farm/cafe serving GF fare. Beautiful place. Friendly staff. Tasty fresh food. We sat outside while Becky the farm’s black Lab, charmed us into giving her some of our breakfast. We sat quite a while chatting with the farm’s friendly owner.

We had reserved site #67 at the Hampton Campground at EC Manning Provincial Park. However, when we pulled into the place, we noticed it was baking in the hot sun. We drove to the park’s visitor center and inquired if we might change our reservation. The beautiful pale blue-eyed ranger told us we could choose from the first-come, first-served sites at one of four campgrounds within the park, suggesting that Coldsprings Campground would be the quietist. Driving further west along Hwy. 3 we pulled into Campsite 23 at Coldsprings Creek. Lovely site along the Similkameen River. An antique wood outhouse was about a quarter mile away. No matter, the site was beautiful, private, and lined with trees. A ‘campground operator’ with an Aussie accent drove up that afternoon and pleasantly exchanged our previous reservation to the current one with no fuss. He said this site was one of the best at the campground and it was always occupied. We shared it with hundreds of mosquitoes and other flying insects. Good thing I bought insect repellent at the visitor store.

Excessive tourism has diminished the outdoor experience at E.C. Manning Provincial Park. Hampton Campground, mentioned above, had more than a hundred campsites, a pair of outhouses, and a building with flush toilets and showers. Its newly remodeled bathroom featured showers whose drains were clogged with hair. New sink fixtures were already loosening; they were cheaply made. We met a dejected couple traveling from Wisconsin, sweeping away broken glass from their van. We learned they had parked near a popular trail, Strawberry Flats. Returning to their car after hiking, they found their window smashed, and the woman’s purse stolen. They lost their passports and $120 in cash. We learned they reported the theft. Park rangers contacted the embassy so they could obtain temporary passports. In the mean time they were without any money. We gave them some cash so they could eat at the park resort’s restaurant.

Wifi was excellent at the Manning Park Resort, which featured a store, restaurant, and condos. We sat out on Adirondack-style chairs to tune in to the outside world. A pair of ravens screamed for food handouts and had no fear of humans. A Zombie-like employee at the Manning Park Country Store stared numbly at unruly children unleashed to plunder the goods. I wondered if park management overworked its employees like North America’s Aramark concessionaire does at Yosemite and Olympic National Parks.

Bill and I found the best places to be were the ones least visited. Without hookups, our Coldsprings campground appealed to smaller rigs and tents. Hampton and Lightning Lake campgrounds were the most populated. The newly built Skyview Campground catered to big rigs and charged $71 a night for water, power and sewer hookups. It looked like a parking lot, recently cleared of tree blowdown with piles of dirt separating the 90+ sites. Perhaps 10 percent of the campground was occupied when the park’s other three campgrounds were nearly full.

Our Coldsprings campground hosted a beautiful nature trail loop around the Similkameen River. Its shores were lined with wildflowers, such as lupine, columbine, and creamy bunchberry, a cousin of dogwoods. Old growth evergreens, aspen and birch grew along the sometimes steep river canyon walls. The gravel roads are oiled to keep the dust down.

One day we drove to the city of Hope, about a 20-minute drive northwest of EC Manning Provincial Park. The city is nestled among towering evergreen-clad mountains and sits like a giant thumb at the confluence of the Fraser and Coquihalla rivers. While I spent five hours sitting at the Hope Library writing Chapter 14, Bill wandered around town.

Hope bills itself as “the Hollywood of the North,” for its setting in the 1982 film, Rambo, First Blood, starring Sylvester Stallone. The City hosts a celebration of the film every five years. This year the town plans a 40th anniversary Rambo celebration over its Thanksgiving weekend Oct. 7-10. There’s a Rambo Bridge, and several chainsaw wood carvings of Stallone as Rambo. Rambo actors Patrick Stack and Stephen Chang plan to be part of the 2022 event. With all of the machismo about town, I noticed the library posted a number of fliers throughout the building citing help for domestic abuse victims. A painted purple boulder outside the library read “Stop Domestic Abuse.”

One of the best places for a view of the north Cascades and Hozameen Mountain is Cascade View Lookout. It is a popular place for sunset gazing. One evening before dusk we drove up its winding Blackwall Road. Biker guys and a woman passed us on its curves and parked at the lookout spot. When we arrived, I walked up to the group, who were laughing and enjoying the colors of the sinking sun on the evergreen-clad mountains. I wanted to read the sign behind them identifying the peaks rising from nearby Washington State. We chatted and I returned to the car, telling Bill our initial intimidation at seeing a gang of bikers was unfounded. We lingered longer than they did. As they took off, each biker raised a hand in greeting as they roared down the hill. We named them the Magnificent Seven. On our way down hill, we took some of the best photos of our whole trip of wildflowers in the twilight at 9 pm. Lupine. Indian paintbrush. Scarlet Columbine. A grouse thumped his love call for a lady.

July 14 we left our campground, strangely anxious to get back to the U.S. We waited in line at the Sumas border crossing about half an hour. We spent about five minutes with the U.S. agent, declaring we had no eggs (the Avian flu prohibits their transport) and were on our way.

‘Helen,’ our Google navigator, instantly switched back to announcing distances in miles. We bought groceries at the Community Food Co-op in north Bellingham and headed towards the tiny town of Bow for our favorite Mexican restaurant in the state, the Mariposa Taqueria.  Its farm to table ingredients, funky atmosphere and local artists behind the counter are just our style.

We continued on Hwy. 20 heading toward Deception Pass. Traffic backed up for about half on hour with tourists on this beautiful afternoon. While stopped in traffic, we admired the pink fireweed framing Campbell Lake.

By about 4 pm that day, we pulled into the driveway of our red house on Morning Glory Lane. Our house caretakers Lily, Shayna and Rachel had created a welcome home sign. The house looked cared for. Our orange cat Ollie meowed a hello. We were home.

Now, reflecting on our return more than a week later, we still have the sensation that we’re on the road and this is only a stopping off point for the next destination. We’ve assembled a slide show of the past 15 weeks, have seen friends, and are taking care of the house and garden. With 1,600 square feet of living space, our home feels too big, compared to Marion’s 11 x 8 foot cozy interior. We are going through closets and cupboards, reducing our too-much stuff. Marion is up in Mt. Vernon, having her old parts serviced, her windows and belly band resealed, and her propane regulator replaced. That 43-year-old girl needs some attention.

Something I did want to mention. The America we saw for the most part, is much better and less scary than we hear in the news. Yes, there are hard things happening in the world. But more, there are friendly people living their lives. There is the Earth and its landscapes that lift our spirits. There are breezes and birdsong and flowers and flowing rivers. There are families and friends. Murals on town walls. Freedom to express one’s beliefs.

A soft breeze is blowing. I can feel it while I sit on our couch. Time to start a new day.