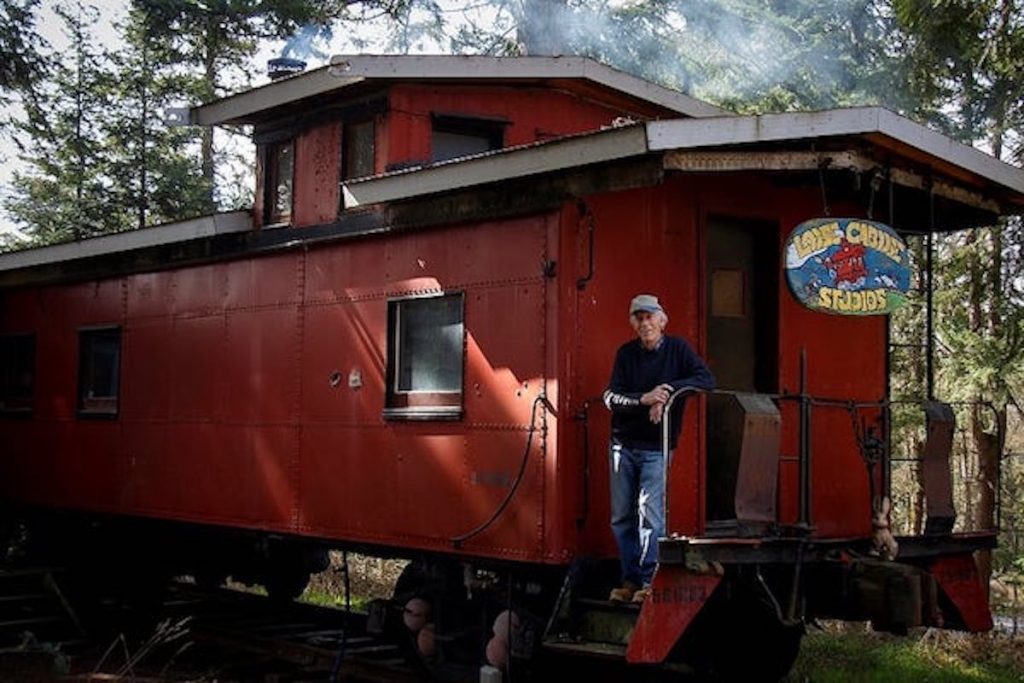 David Welton took this photo of Jim Freeman at his 'Loose Caboose Studios' in April 2019. Jim Freeman passed away June 19, 2022. The much loved funnyman will be missed

Note: Whidbey Island lost one of her best funny men June 19. Jim Freeman passed from his body a few days before his 75th birthday. I heard the news in Joseph, OR, from David Welton and our friend Sydney Wolcott. Jim Freeman was one of the funniest people I’ve met. I liked the way he included others in his humor. I will miss his ‘On Track’ column. Fare thee well, Jim. Hope all is well on the other side. Thanks for all the fun times. You are loved!  –this story was originally printed in April 2019.

This interview took place last week in Lone Pine, California where I was camping with my husband Bill. I phoned Jim at his caboose in Freeland. We made a phone appointment ahead of time so that he could plug in his land line and be ready to visit.

“I’m drinking water out of my Lone Pine film history cup wanting to be connected,” Freeman said when he picked up the phone to say hello. Lone Pine California, northeast of Los Angeles, is the setting where many westerns and science fiction movies were and are filmed. The Museum of Western Film History is where Freeman bought his cup. He said he enjoys B-movie westerns, among other things. Freeman reminisced about how Whidbey found him and rambled here and there as befits his story-telling style.

Freeman, who was raised in the Midwest and the East Coast before moving to California after serving in the Marines, said, “If you’re in L.A., you gotta go to Capitol Records. I ended up living across the street and I could look out my window and see Capitol Records (in Hollywood) and that was as good as it gets. I’m still a Dodger fan.

“After law school graduation in San Diego, I worked at a law firm in Granada Hills from 1974-1978 while also traveling as an executive secretary and placement director for Phi Alpha Delta Law Fraternity, International, in addition to starting and running the Willie Nelson Fan Club from 1975-1979. In 1979 and 1980, I was on the radio in Bend, Oregon at KGRL-AM and KXIQ-FM as a disc jockey. After breaking my legs snow skiing at Mt.Bachelor in Bend, I went back to L.A. to get into comedy. I studied comedy with Stanley Myron Handleman in Venice after he had retired from touring and TV. Paul Reubens (Pee Wee Herman) was in the class before mine. Stanley gave Paul the idea to take his Pee Wee character and turn it into a stage show and morning show for kids —pretty good advice, eh?

“In 1980, I auditioned successfully and was picked to work as a cast member of the L.A. Connection Improv Comedy Troupe. We performed every weekend at our theatre in Sherman Oaks while our A-team members worked as comedy relief on Joan Rivers’ short-lived Tonight Show.

“In 1981, I was hired as the spokesperson for the Bartending Academy’s TV commercials for their schools in San Diego, Denver, and Seattle. After our first series of ads, things got real busy for me. I began doing ads for three open-air markets in Ontario, Colton, and San Jacinto, which put me all over L.A. TV and radio. So, with commercials running in three states and four major cities, I was almost making a living. That was when I met the Seattle guy who advised me to try Whidbey if I wanted to be near Seattle but not in it.”

So Jim Freeman left L.A. and moved to Langley. Soon after he moved, Freeman stopped in at the then-popular Dog House, the now shuttered bar at First and Anthes streets in Langley. Turns out the bartender Bill Walton’s dad is the landlord for Freeman’s dad in Pennsylvania and Freeman was treated to a free beer.  Soon afterward he met Walton’s wife, Shelley Hartle, who had been a student teacher for Jim’s 12th grade English teacher who had changed his life years ago.

“It was a meant to be place,” Freeman said. “If you see the need fill it. It’s what my grandpa said. Golly! I feel I’m the court jester for South Whidbey and North Whidbey. We’re like a kingdom. My dad said, ‘Son if you’re going into entertainment, don’t tell the same joke and know your audience.’ I took Dad’s advice and moved in with my audience.”

While practicing law is one kind of performance Freeman found another way to use his talents.

“We used to have the First Street Theater above the Dog House in ’85. We had a showcase of several artists and musicians, and I was the wannabe comedian. Out of that audience I got hired for Choochokam (Langley’s art festival), and, thanks to Eva Mae Gabelein, the then Island County Fair. It kind of evolved. We did community talent shows for 20-plus years. Jean Shaw (a now-retired much-beloved school teacher), put me to work at the beginning. I was a wanna-be lawyer who couldn’t take it any longer. I wanted to get away from Hollywood and all that stuff. I went to the Island County Fair. Johnny Rivers was the headliner. I asked why no one was introducing him. I said this is the greatest thing I’ve ever seen. I’ll do it for free. See what I do. Then I worked that fair for 25 years. I have emceed for auctioneers. The auctioneers didn’t know the audience locally. I wasn’t an auctioneer, but I found as long as you can have fun with someone who likes my sarcasm, it works.”

Hanging out at the Dog House in its glory days found Freeman the connection to the vintage caboose he lives in to this day.

“I was living at the beach at Sandy Point. So I’m at the Dog House. I meet Sandy Menashe (a realtor with Dalton Realty) and I say I’m new in town. I say there’s no privacy where I’m living. It’s a fishbowl. She said, ‘Where do you want to live?’ I said the woods. A week later she knocks on the door and says she found me a place in Freeland. I didn’t know Freeland existed. My grandfather was an engineer on the railroad. Sandy found me a caboose on tracks! The woman who owns it has multiple sclerosis. I got to know the landlady. I helped move her down the street. Helped take care of her. She let me stay there for a good rate. I said I’d like to buy your place if you’d like to sell it ever. So I bought the place, paid her off. Another coincidence, a divine intervention. Every time I see Sandy, I thank her.”

Sandy Menashe is a friendly down-to-earth woman who is easy to talk to. About her friend, Jim Freeman, she says: “Jim is one of a kind. I am amazed he is still chugging up the tracks making people laugh, and happy to feel alive, while helping the community. I am lucky to have known Jim before he got famous, going on 35 years. He was magic then as he is today. To this day, every time  I see him he thanks me for helping him stay in his caboose, which is part of who Jim is. The head conductor.”

Freeman said he likes to think of himself as a Conductor of Fun. And his classic train car adds to the image.

“The people I got the caboose from were second owners. I’m the third owner,” Freeman said.

A train collector living on Whidbey lugged the tracks and caboose wheels, then the caboose shell on the ferry in late 1979. Nichols Brothers boatbuilders craned it off the 18-wheeler it was carried on. The red-colored over orange caboose is apparently a rare thing.

“I looked up the history and found there were only two milled by the Milwaukee Road line; it’s an old drover’s caboose, used on the White Pine Route.” Freeman said. “Train buffs come here all the time to take pictures. An FBI agent, Thomas Burg, showed up once with his authored book, White Pine Route, showing this caboose in action in one of the pictures. He followed the rumor that someone moved to an island with it. My train is a 1928. The minute I first walked in I felt like having a shot of whiskey and a Camel cigarette.  But I didn’t drink whiskey or smoke!”

A buddy named Bob Sandal told Freeman he needed a truck to haul his wood, not his dad’s Oldsmobile. Sandal, one of Whidbey’s “great guys,” as Freeman calls him, bought him a  1986 Chevy Durango blue truck that is driven to this day. It’s as much a part of Freeman’s personae as his caboose is.

“At the time I say to Bob, I don’t have any money, but I’ll pay you when I do. The truck had 40,000 miles on it then. Now it’s at 218,000. I called up buyer buddy Bob seven years afterward and said I got the money. And he said he wouldn’t take my money and he’d never speak to me again if I tried. That’s Whidbey island. I’ve never been anywhere where I saw more caring people, not just because we got so many nonprofits.”

Freeman wrote for various island newspapers, including Drew Kampion’s former Island Independent and currently writes On Track, a column for the Whidbey Weekly.

Drew Kampion, who publishes drewslist, wrote: “Did you see that new movie, about Mr. Rogers’ Neighborhood? Well, Jim Freeman holds Whidbey Island the way that Fred Rogers held his audience. He (Rogers) held them to their higher purpose and spoke to them honestly and directly, each as a unique citizen of this planet. That’s the way I’ve seen Jim Freeman relate to people throughout the 28 years I’ve known him. As Jim said: ‘Communication is a shared understanding or a lack thereof.’ Jim also noted that, ‘Hair does not grow when you are afraid.’ Jim Freeman is not merely the glue that helps hold the island together; he is a staple!”

Freeman may write about metaphysical fish schools or reminisce about the spirit of his mom giving him courage when he’s doing comedy. He naturally brings people out of themselves.

“Everybody’s got a story,” he said. “Why would you move to the island unless you’re unique, you’re a self-starter, you’re involved in your own life to the point that you’re comfortable with your essence. You might build a cabin or mold glass. You see ‘em in the grocery store. People take whatever God’s gift is and are creating it. No wonder we’re so charitable, we’re happy. To me Whidbey’s communities are the real beauty–the beauty of the people is what has kept me here. I’m just thrilled to part of what it is that we’re part of.”

What it is Freeman is part of these days is a short film coming up by local avant garde director Richard Evans about a chauffeur. Stay tuned for more from this Conductor of Fun.

Therapies that promote healing and well-being

A man who pays it forward in helping families stay together