Why Ancient Wisdom Matters in the Modern World 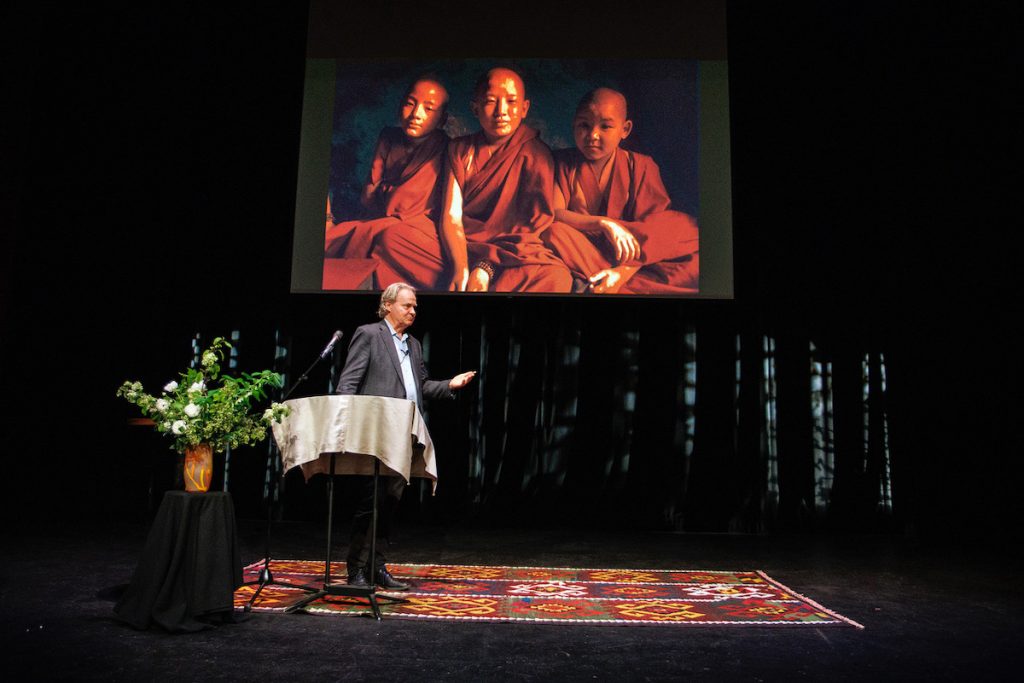 Dr. Wade Davis speaks at WICA May 6, on "Why Ancient Wisdom Matters in the Modern World" He was invited to speak by the Sno-Isle Library Foundation's Trudy Sundberg Lecture Series

I am writing this story from a bench outside an historic building in Abiquiu NM. Sharon Garcia, the librarian here, said the casita once housed her grandparents, and she lived here as well. Her parents later donated this home to be used as a library. It is now part of the New Mexico Rural Library Initiative, and, because of its rural nature, has no access to municipal funds. It is 100 percent community supported.

Sharon has always loved to read and now shares her avocation with library patrons old and young. Sitting here across from adobe buildings, and the Santo Tomas El Apostol Catholic Church, built in the mid 1700’s, makes real why ancient wisdom matters. There is a felt wisdom here that precedes modern science and honors earth law to maintain hozro, a Navajo word for balance.

This story recalls Dr. Wade Davis’ lecture May 6 at the Whidbey Island Center for the Arts (WICA). He was invited to speak by the Sno-Isle Library Foundation’s Trudy Sundberg Lecture Series. David Welton took the photos for this story.

Dr. Davis was introduced by Trudy Sundberg’s daughter, Jan Sundberg Whitsitt, who first learned of Dr. Davis’ work 15 years ago. In her introduction for Dr. Davis, she said it took 15 months of planning, with the help of Dr. Marshall Goldberg, and the Sno-Isle Library Foundation’s Lecture Series Planning Committee, to bring the May lecture to fruition.

“The Trudy Sundberg Memorial Fund underwrites a lecture series dedicated to her commitment to exploring issues important to life-long learning,” Jan added, noting that this was the eighth lecture honoring her mother’s legacy. “A champion of the downtrodden, she created think tanks to address local issues and took action. She was a lover of nature and a master swimmer. When she died, the lecture series was created to keep her spirit alive.”

Dr. Davis is an international cultural anthropologist, ethnobotanist, author, photographer, filmmaker, and teacher. His work has focused on the many of the world’s indigenous cultures and languages and has taken him all over the world. He served with National Geographic’s Explorer-in-Residence program from 2000 to 2013. Spending three years in the Amazon and Andes he made 6,000 botanical collections, has written 23 books and published 300+ articles. He has made over a dozen documentaries.

I watched his lecture at the Abiquiu Public Library May 26, streaming from Sno-Isle Library’s webpage. Wade Davis stood, speaking in an easy flowing way, about science and indigenous belief systems, while showing slides of the many cultures he spent time with. His energy and enthusiasm and love for the people he’s met is captivating.

One of his themes is that there is more than one model of reality. In his book, The Wayfinders: Why Ancient Wisdom Matters in the Modern World, published in 2009, he writes: “Science is only one way of knowing, and its purpose is not to generate absolute truths but rather to inspire better and better ways of thinking about phenomena.”

As an example, he noted that of the 7,000 languages in existence when many of us were born, many are disappearing at the rate of one every two weeks.

“Fully half are on the brink of exhaustion,” Dr. Davis noted at the beginning of his lecture. “People ask, ‘what if we spoke one language?’ My answer, great idea, let’s make it Haida, or Mandarin. How would we English speakers feel about that? Once every two weeks some elder passes away and carries away the last syllables of their ancient tongue.”

From his talk about disappearing languages, he flowed to the concept of race and culture, and returned to the importance of preserving the world’s diverse language heritage: “Race is an utter fiction,” he noted. “We’re all descendants of Africa. If we’re cut from the same genetic cloth, this means every culture shares the same acuity. There is no hierarchy in the realm of culture. Other people of the world haven’t failed to be modern. What does it mean to be human and alive? The 7,000 languages collectively will provide answers to our future. Each culture deserves to be heard.”

Dr. Davis spoke for more than an hour to a rapt audience which overflowed into Zech Hall, and into the lobby where they watched the lecture on screens assembled for the event.

Marshall Goldberg noted his impressions of Wade Davis in a phone call following the May 6 talk.

“My takeaway, my impression is that Wade Davis is an intellectual giant,” Marshall said. “In my entire life, I’ve never met someone of his caliber. He’s conversant in almost every subject. That kind of capacity is really rare. When you talk to him, you’re talking to someone without a humungous ego. He’s 72 years old and has lived many lifetimes. So humble and friendly, he’s about as engaging a human being as you can ever meet.”

The lecture conveyed optimism for humanity and the earth, Marshall noted.

“Wade talks about bad things happening, like loss of tropical rainforests,” Marshall noted. “Overall he’s optimistic about the ability of humans to adapt and change. When speaking about cultures, he didn’t use words such as extinction. He said they are stressed. There’s hope these cultures can be preserved. There’s value in having a multicultural universe. Unlike the traditional Western view of some cultures being less civilized, they are not any less than us, just different. Those differences are important. He talked about the value of languages—he gave so many statistics in a short time—and how language reflects culture. When native speakers die, the culture dies.

“Honestly, I spent two hours with him Thursday evening at a dinner. I could spend a whole week with this guy. By the end of the evening, I got my photo with him. My smile was totally spontaneous. I thought if I would have met him as a young man, I wouldn’t have gone to medical school., he motivates and inspires to that degree.”

Dr. Davis also spoke to about 350 South Whidbey students on another ocassion, Marshall added.“They were turned on by his messaging. One young woman thanked him and said he changed her life forever. That’s the way Trudy Sundberg was, too.That’s the beauty of communication.”

Speaking of the beauty of communication, as I watched the lecture, a man in a cowboy hat drove up in a white Toyota pickup. He sat on a table nearby eating a burrito. I asked if the video sound was OK for him.

Turns out, he is Francisco Uviña-Contreras, research lecturer, and director of Historic Preservation and Regionalism with the University of New Mexico. He was here prepping for next week regarding recuperating a root cellar nearby that will “showcase earth building technology.”

I mentioned the context of the video, which he found interesting, and emailed him the link.

I asked him why it is important to preserve the old ways.

Linking this important lecture on Whidbey Island with the reality of preserving one bit of history here in Northern New Mexico emphasizes the importance of how much richer our lives are when we are open to other cultures.

Ambassador for Peace at the Earth Sanctuary