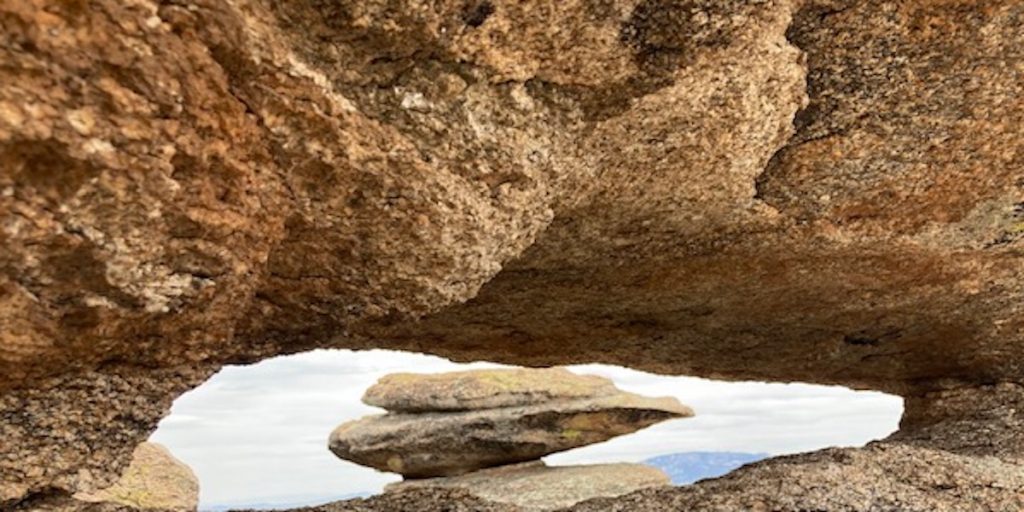 Join us on our 2022 road trip with Beatrix the Toyota Highlander and her faithful companion, Marion, the 1979 Trillium Travel Trailer. This week we visited Tucson.

Hooray! We are in Tucson for the next week. To stay cool in this desert heat, I bought us tank tops at Ross for Less nearby Rubio’s Mexican Grill, where we ate delicious Mexican street-style food. Can’t remember when we wore sleeveless shirts last.

Bill and I went swimming at the Quincie Douglas public pool. The city of Tucson has free swimming through the end of the summer. The swim was refreshing after sitting motionless in the library for 4 1/2 hours writing last week’s story. It was 100° when we first arrived at the pool and the temperature lowered to 95°.

After our swim, we drove up Kinney Road to Tucson Mountain Park. We drove up to the campsite 62 at Gilbert Ray Campground. Who was Gilbert Ray? He was the first Pima County Parks and Recreation director, who began his career in 1947, and retired in 1972.

While eating Rubio’s dinner that evening amid a desert forest of saguaro, barrel cactus and paloverdes trees, a dove landed on the roof of Marion to greet us. The sun was setting amid dreamy clouds.

A gentle breeze blew and ruffled our hair. A pair of kids took turns pushing each other on a skateboard. We felt at home in this perch above Tucson with a view of the city lights.

Speaking of cactus, we couldn’t take walking at our campsite #62 for granted. I wore flip-flops at first, and a thorn poked through the sole to my foot. Changing my shoes to sturdy Keens, we went for a campground walk and met neighbors Dave and Missy, an outdoor-oriented traveling family who are homeschooling their pair of tween-aged children. Dave mentioned his girls are independent and make friends easily with other kids while on the road. Dave took a photo of us in the glow of the setting sun.

Tuesday morning we drove to Barrio Bread, one of the best bakeries in Tucson for healthy bread. Lines form as soon as the bakery opens at 9 a.m. Bill bought a loaf of raisin and another of sourdough whole grain, which he’s eating a week later while we stay at my uncle’s home in the Saddlebrooke community.

Meanwhile, we did our laundry at Cool Cat Laundry, nearby U of A in Tucson. A beautiful lady in royal blue leggings and big eyelashes—big eyelashes are seen often here— recommended we eat at her favorite places: The Monica, or Tumerico, which was closer by. Just the way her face lit up when describing these two eateries, I knew we were in for something good.

Tumerico serves freshly made vegetarian and vegan dishes. Healthy and delicious with excellent Frida Kahlo art, we noticed the attention to detail in the interior decoration, we appreciated the friendly staff and enjoyed the food. I ordered Barbacoa with Huevos,  eggs with shredded jackfruit, veggies, rice and Mexican spices. Bill ordered Huevos Rancheros. Healthy local ingredients made for a satisfying meal. Large portions meant we would have this food for dinner later on.

We opted to take our second COVID 19 booster shot at Tuscon Public Health. Afterward we drove up to Mount Lemmon, where the temperatures dropped about 30 °. Locals ski here in the winter. I felt extremely sleepy after the booster. Bill enjoyed photographing hoodoo rock formations.

That evening we took our trailer cushions and laid out on our campsite picnic bench listening to Conclave, by Robert Harris, narrated by Roy McMillan. Such a compelling tale of an alternate world in which our current pope has died and a new one must be found. We learned much about papal elections, politics among the cardinals, and were reminded of the strengths of our Catholic upbringing. What a treat to lie out under the night sky and be read to.

We learned our first night that, to prevent the hundreds of moths and tiny insects from swarming our lights, we kept our lights out, except for Bill’s occasional green light from his headlamp. He used this to read and take notes while phoning in as a Saratoga Water District board member for its monthly meeting.

For our 43rd wedding anniversary April 21st, we drove south to the tiny town of Tubac. Breakfasting on mediocre food at Stables Grille golf resort, we watched folks lining up to tee off. Our table neighbors turned their chairs hoping to see the golfers hit their balls in the pond. Odd behavior, Bill and I thought. We chuckled at the presence of cows on the immaculate golf course. Walking around the town, we enjoyed the Tubac Center for the Arts, and the talented artists whose work adorned the walls of the non-profit.

Hot in the 90+ degree heat, we found relief with honey ice cream at Untamed Confections under the shade of an awning. People watching, I shook my head at a weathered crabby fellow walking by with four women. One of the women said she’d like to stop in for an ice cream. The old crab said, “Naw. Too healthy.”

Glad to be back at campsite #62 and the shade of our paloverde tree that late afternoon, we talked to a man camping nearby in a fiberglass Casita, an American cousin of our Canadian-made Trillium. Folks often stop by to comment on how cute or interesting Marion is, or ask what kind of model she is. Admiring camping rigs is a common practice while on the road, and a good way to meet the neighbors. The Casita-camping man said he prefers to camp solo, because all the women he’s dated always seem to look better from a distance.

Washing dishes here at Gilbert Ray is such a pleasure. There’s a nice deep sink, hot and cold running water, and a shower nozzle for hair washing behind the bathroom. We got chatting one night with a wonderful retired lady from Texas, who is traveling around until her tiny home is built in North Carolina. I loved her accented voice, and the way she kindly said, “Ya’ll.” We thought about how much we take for granted with our indoor plumbing and our running water. What a simple pleasure it is when we can meet the whole world at the communal sink out by the campground bathroom. Or when filling up our gallon jug with precious water from the tap.

We visited nearby Saguaro National Park, and enjoyed getting to know the Curved Bill Thrashers, watching a Gilded Flicker hunt insects on a creamy yellow saguaro flower. We learned from the park ranger about the menacing Tarantula Hawk Wasp, an indigo blue wasp with orange wings, about the size of my pinkie. They hunt tarantula, sting them, and drag them to their nest, where they lay eggs on the corpse. At our campsite we noticed a couple of tarantula nests whose exterior was lined in spider silk. I hoped the wasps didn’t find them. Also on the Discovery Trail at Saguaro National Park, we read an information sign that talked of the sedimentary rocks that were here more than 800 million years ago. The number was crossed out, we guessed, by someone who believed the world was created more recently.

We visited St. Xavier’s del Bac Mission one morning. It was founded in 1692 by Father Eusebio Kino. Construction of the current church began in 1783 and was then part of New Spain. Following Mexican independence in 1821, the mission became part of Mexico. It had been run by the Jesuits at first, but after they were expelled, the Franciscan padres took over running the property. The mission became part of the United States in 1854. It is the oldest intact European structure in Arizona. The interior is filled with statues of saints. The building is located on the Tohono O’odham nation reservation.

On our last day camping before staying two nights at my uncle’s home in the Saddlebrooke community north of our campsite, we visited  The Monica Open Kitchen and Bar, a new downtown eatery with delicious food and excellent vibe with people of all colors and orientations visiting. I told Bill I could live in the city. Me, a nature girl saying this! We felt enlivened by the friendly people, delicious food, and great staff. Our server even offered to buy us dessert.

While parking for The Monica, we met a woman named Allysyn from Oakland, who is looking for the next place to live. We later met her at the Tucson Children’s Museum, where an Earth Day fair was going on. We found we had much in common.

Afterwards we visited St. Augustine’s Cathedral nearby. Founded in 1776, it predates Arizona’s statehood. We enjoyed sitting inside the beautiful building, admiring, especially, the alcove honoring Our Lady of Guadalupe, Juan Diego, the simple shepherd who met her, and Kateri Tekawitha, the patron saint of ecology. One of my best friends, Kateri, is named for this Native American saint.

John Chinworth, a friend from my teaching school days at Seattle University used to live in Tucson and returns to visit his family. He recommended we eat at Guadalajara Original Grille on Prince Road. We recommend the excellent chicken and fish tacos. Homemade tortillas, guacamole and salsa are the best. A festive atmosphere which celebrates Mexican celebrities and history is seen on the restaurant’s walls.

The day we left for Uncle Orland’s we hiked first at Sweetwater Wetlands Park, a desert oasis that processes Tucson’s wastewater. It does not smell bad here! We enjoyed the cool shade of the cottonwoods, while walking around the park’s various ponds. Birdlife is rich here. Regular visitors showed us a video of the resident bobcat. We hoped to see one. Bill announced he needed to leave the trail and turn the fridge off, concerned it was draining the trailer battery. I continued walking and did meet the friendly bobcat who looked at me and meandered over to lie in the shade of a bush. I did not find the park exit and wound up walking along a paved bike path outside the treatment plant. Bicyclists whizzed by. It was a rare time I didn’t have my cellphone. I located a weathered hiker who loaned me his cell phone. I called a worried Bill. The hiker gave me directions to our car, about 3/4 of a mile away. I was glad the temperatures were only in the 70’s that day.

Over at the Saddlebrooke Community in north Tucson, we visited with my Uncle Orland, my dad’s half brother. The two men are so alike, good story tellers, kind, and caretakers for their family. My dad passed away in 1991, so it is great to spend time with someone so like him. Orland took us for breakfast at one of his favorite places, Jerry Bobs Family Restaurants. The friendly waitresses know him and treat him like family.

We took Uncle Orland for dinner at Carlotta’s Authentic Mexican Cuisine, at its new location. It is owned by a woman. We were impressed by the wall-sized portrait of artist Frida Kahlo, whose eyes followed the visitor, as we walked in. The food here is excellent.

Swimming at the Saddlebrooke Pool, we were taken by the vista of the Catalina mountain range, a scenic feature that adds to the community’s appeal. Uncle Orland took us on a tour of his community Monday evening and we could see why he’s enjoyed living here the past 22 years. He’s gotten to know his neighbors since he worked as their electrician and dog sitter.

Since we are allowed only two nights parking on the street, we will camp at Catalina State Park on Tuesday April 26th.

Tucson is a place we consider wintering in for the future. The people are friendly, the landscape appealing, the many buildings and neighborhoods interesting, and the university atmosphere keeps it diverse. We shall see what this road trip to other states brings us.