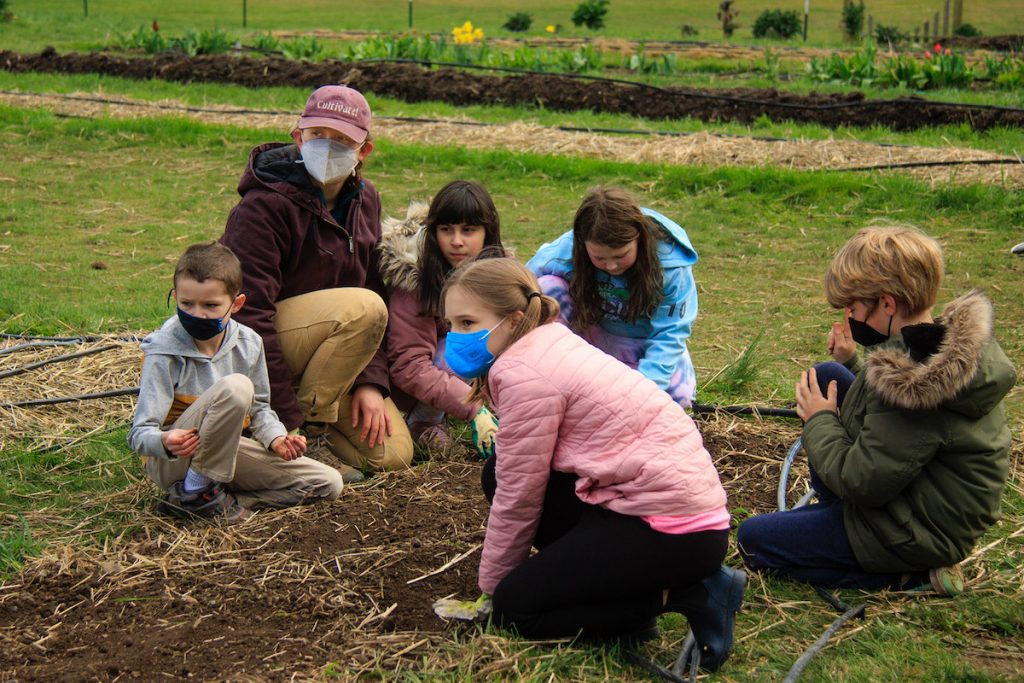 Lily Cowen, in pink hat, is a member of the AmeriCorp team which supports the South Whidbey School Farm Program. Here she works with students in mulching a vegetable patch. The AmeriCorps team works with about 600 students a week

The South Whidbey School Farms program is a win-win for South Whidbey students who benefit from learning farm and cooking skills and the young AmeriCorp adults who teach them while gaining experience for future employment.

It is heartening to meet the team of five clear-eyed, thoughtful, and down-to-earth twenty-somethings who say their lives have been enriched by their experience so far.

How could they not be? They work in one of the best programs on the island founded by Cary Peterson, who influences those around with her with an optimistic outlook and a willingness to joyfully work in the garden. Cary subtly appeals to our higher purpose of caring for the earth and our children in the farm garden program. A 2017 film, Cultivating Kids, by local filmmakers Melissa Young and Mark Dworkin, is a documentary about Cary’s work and the benefits of teaching children to like eating the veggies they’ve grown.

Cary started the school gardening program in 2013 on unused land behind the South Whidbey Elementary School. Another field was added in 2014. Since 2019 the program has grown and is now fully integrated into the curriculum offered within the South Whidbey School District.

“We’ve doubled the size of the team,” Cary said in reference to the farm’s four AmeriCorps members  this year. Previously her team was comprised of two AmeriCorps Farm service members. “Whidbey Island Nourishes also added a culinary educator. We do so many things now. The program made a huge shift in 2019 when the school took over. When teachers have planning time, the students come here. We’re a ‘specialist’  program. Every child comes here. That’s 600 students every week. Seven classes a day. They are the farmers growing all the food. That’s a lot of farm-based curriculum and tasks every day!  Plus we have the the very popular culinary program. The amount of learning and hands on experience is pretty extraordinary. We have a large operation to keep this many students engaged. A big feature of the classes are garden nibbles after every class. They come here ready to eat what they grow.”

South Whidbey School Farms contracts with Washington Service Corps, which typically provides young adults with a stipend to serve in their area of interest. According to the website, “AmeriCorps is a program of the Corporation for National and Community Service, an independent federal agency created to connect Americans of all ages and backgrounds with opportunities to give back to their communities and their nation. AmeriCorps is made up of three programs: AmeriCorps State and National; AmeriCorps VISTA; and AmeriCorps NCCC (National Civilian Community Corps). The Corporation also oversees Senior Corps. Together these programs engage more than 1.5 million Americans of all ages and backgrounds in service each year.”

Rachel Nottingham was hired as the farm program’s new culinary educator. She teaches students to cultivate their sense of taste, getting them to enjoy homemade sauerkraut and yogurt they have made. She noticed many of her fifth and sixth grade students did not know how to identify what they tasted, at first. Or one girl might say she didn’t like a certain flavor and others would follow suit. Rachel invites her students to consider what they are tasting and get to know the ingredients they grow and cook with.

Rachel is from northeastern,Tennessee, and honed her interest in specialty agriculture, beginning working with her mom, who operates an urban farm called Little Mountain Microgreens. Though this work she was connected with other agriculture-based nonprofits in Appalachia. She WOOF’ed at an organic vineyard in the Finger Lakes of upstate New York. The owners of the vineyard were members of the Peace Corps and inspired Rachel to look into AmeriCorps to add to her gap year. She also worked for local restaurants that focused on locally grown and seasonal produce, which trained her in cooking techniques she uses during culinary classes.

“I wanted to explore different sections of agriculture in conjunction with culinary arts and food insecurity,” Rachel said. ‘I heavily filtered the programs AmeriCorps had listed to show only these and was shown two programs—Whidbey Island looked beautiful and gave me the chance to come to the West Coast for the first time. We thought it was pretty magical when seeing the bunnies here, like a storybook.”

Lily Cowen grew up in Ithaca, NY, and was interested in agriculture courses in college. A ‘Seed to Supper’ course caught her interest. It taught how to grow vegetable gardens from a limited budget. She worked on the student farm and eventually co-managed it.

“I liked working with the community and knew that agriculture was a way to build relationship with all sorts of people,” Lily said. “I hadn’t worked with kids before. School farms were on my radar. I heard AmeriCorps was a good starting point for starting a career. Cary posted this job and I was interested in coming to the West Coast. I thought, ‘This is my dream job.’”

Riley Baker is also from Tennessee, and said she became interested in agriculture “When I realized how little I knew where my food was from.”

Attending college in North Carolina, Riley’s studies focused on education, work in the real world, and community service. She decided to major in sustainable agriculture. Her partner is enlisted with the Navy in Oak Harbor, which made Whidbey a good choice for the move. She found the position with the school farm a great opportunity to combine her skills with her partner’s three-year mission on Whidbey. She teaches farming practices.

“I entered college studying environmental science,” Shayna explained. “At first, I had no idea what my focus would be. I joined Mass Gardenshare, a roughly a one-acre no-till student run-garden and fell in love with that work. Thankfully my college had a strong agriculture program. I found out about school gardens. I figured AmeriCorps would be a good jumping off point. I applied for most of the school farm programs that were posted on the AmeriCorps website. This one impressed me with what it is capable of. The kids come in every single day. There’s a huge amount of space. The fact the produce goes into cafeteria lunches, I thought Whoa! I I remember Cary offering me the service position job. I said yes.”

Produce grown with the South Whidbey School Farm program is sold to Chartwells, the district corporate food service provider, for school lunches. Some of the produce is used to feed school families through the Whidbey Island Nourishes program, with about a hundred volunteers who provide 2,500 meals a month.

Chad Fisher is from Baltimore Maryland. While in college he majored in bioengineering and wanted to find ways to make people healthier and tackle climate change. But he later found bioengineering too removed from people’s daily lives. He served with two previous AmeriCorps terms before landing his third on Whidbey Island.

“Bioengineering felt too far removed from day to day life,” he said. “I felt I could make more of an impact through agriculture. I took a year to figure things out. I toured across the country with  NCCC (AmericCorps’ National Civilian Community Corps) doing service projects. At a botanical garden in Missouri, we built a demonstration garden out of old building materials. I wanted to go toward agriculture in my studies, but didn’t have the experience. I returned to Baltimore at an urban farm. I wanted more of an on the ground experience in food education. I didn’t experience a food education like the students here on south Whidbey do when I was a kid.”

Cary Peterson said these days the farm is managed by herself and Emily Koller, who was hired following a national search for the position, and arrived in mid-March. Cary said she is passing on the baton, explaining she will step down from her role as farm manager this year to pursue ways to develop workforce housing for the young farmers coming to serve in AmeriCorps and also those who are working in local farms.

Emily directed an educational farm in Nevada City, CA before moving to Whidbey. She and her partner moved to Whidbey because they no longer wanted to face the long fire seasons in the Sierra Nevada town.

“I’ve never seen this level of support for a school farm program,” Emily said. “The whole team is super.”

Part of the team is Garden Science SpecialistJay Freundlich, a former high school science teacher, who plans the classes for the seven grades at the farm. All of the farm tasks become hands-on learning opportunities for the students.

Inspired by a comment by Farmer Jay made during a curriculum meeting about eating insects, for April Fools Day, Rachel tinted the weekly healthy popcorn snack green with dehydrated farm-grown pea shoots and Shishito peppers, and then put prank paper grasshoppers in the popcorn.

After their AmeriCorps contract ends in July, the Fab 5 have these plans:

Rachel—is returning to school back East to finish her bachelor’s degree in Food Science—focusing on research of sensory exposure and varietal typicality in regards to produce. She has plans to complete a summer AmeriCorps term next year to take advantage of its education award. She is adamant about not having student loans and is looking for grants to help fund her future.

Riley—plans to stay here with her Navy partner, who is stationed here for three years. She will look at working in production farms, perhaps in the Skagit Valley.

Shayna—is looking to continue her participation in school gardens. “I love the work so much I am willing to do it really anywhere,” she said.

Chad plans to attend graduate school at Tufts University in Boston, pursuing a degree in agriculture.

All the AmeriCorps team mentioned being grateful for the extra community support in finding them affordable housing, food savings and transportation while here on Whidbey.