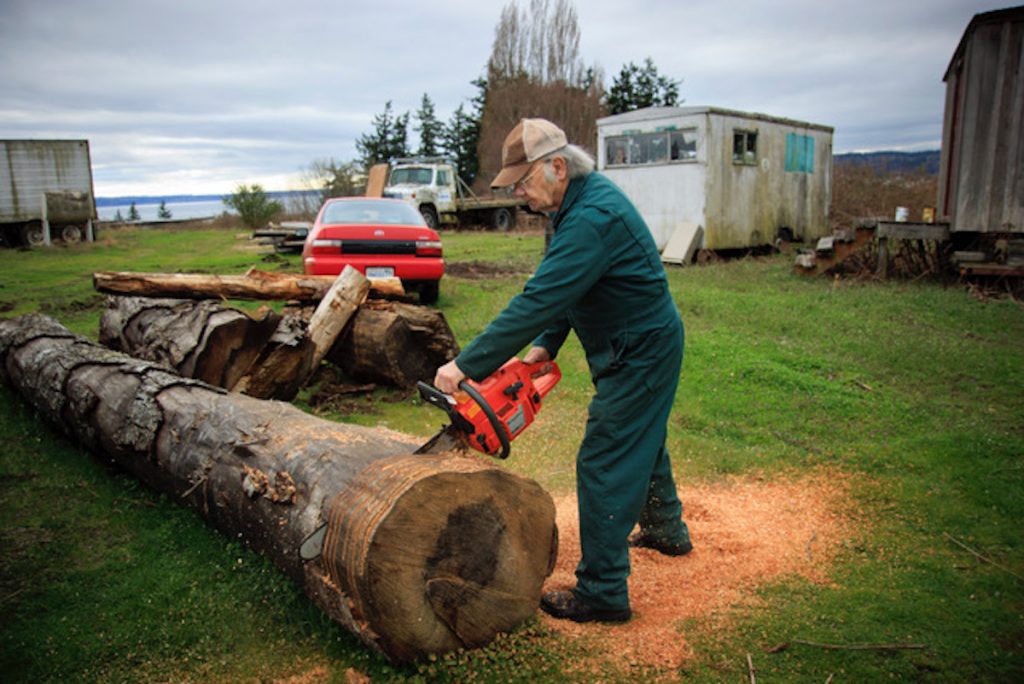 Man of all trades Mike Gallion, tests a chainsaw he's repairing. Mike has lived on Whidbey Island for decades and has always been interested in small engines and fishing.

Mike Gallion is the kind of guy you always hope to find when your chainsaw needs repairing.

Living on Whidbey Island part time since 1948, and full time since 1959, Mike has earned a reputation as the go-to man for repairing small engines.

With his long white hair, his green coveralls sporting a patch with his name Mike in red letters, and his penchant for telling stories, Mike Gallion is a man’s man. His numerous sheds of all things tools and parts, his yard of old trucks, landscape machinery, and abandoned cars, all serve to create a backdrop of endless things to look at and be curious about. Motors and engines have always interested him.

When asked about what brought him to Whidbey, Mike replied, “Well, in 1948, my folks bought a little fishing cabin over on Mutiny Bay. I spent the summers here. I had a little 10-foot rowboat with a 2.5 horsepower Elgin. Dad was an airline pilot. He decided rather than living in Seattle, he liked living here better. We lived up on Crawford Road (in Langley) before there was an airport. We had a 20-acre farm. Raised a few cattle. After that my family moved to a new house overlooking Useless Bay.”

Attending public school in Langley, Mike said he enjoyed fishing and learning about all things mechanical in his spare time. When in high school he started working in engine repair.

“There was a little outboard motor and chainsaw shop in Freeland,” he recalled. “I’d go in with my dad to get stuff fixed. I was always interested in mechanical things, engines. I started hanging out for fun. The guy retired and offered his business to my dad, who bought it for next to nothing. I was 15. I didn’t have my license yet and my folks would drive me to work. I’ve been involved one way or another with small engines ever since.”

While he was in high school, he was one of the founding members of the 4-H Centaurs Horse Club.

“At the county fair arena, they had horsemanship, fitting and showing. I won the overall horsemanship trophy two years in a row. I got to lead the group with the other riders behind me, and carry an American Flag. Wish I had a picture of that.”

After high school, Mike enrolled in and graduated from Western with a degree in Industrial Technology. He recalled a story about one of his favorite professors:

“One of the classes they had was small gas engines. My college advisor and professor, a wonderful man, asked me to be his teaching assistant, I said, ‘sure.’ Of course, I got to spend more time hanging out with engines. A few classes into the quarter, my teacher was standing in front of the class lecturing. The secretary came in and whispered in his ear. “I got a phone call and my son fell out of the apple tree,’ the professor said at the time. ‘Mike, take over.’ I finished the lecture without any preparation and finished the quarter doing lectures and teaching labs. If you really want to learn about something, try teaching. People will ask things you’ve never heard of before. You end up learning from them.”

Mike worked at Boeing in Mukilteo writing software after graduating from Western.

“I worked as a manufacturing engineer and one of the first computer people in engineering at Boeing. Back in the day, I sat at a table with a roll of teletype paper. I wrote software, punched in holes on a yellow strip of paper tape. I had to write all of the software. When you needed software you wrote it yourself.”

Mike lives in a home on land with a view of Useless Bay. His parents bought the property in 1959 and built their home there. Since his parents passed away, he inherited the property and runs his fixit business. He also likes to say he keeps old and unrepairable chainsaws out of the landfill. He collects them and harvests their spare parts for customers. Some saws he rehabs and sells again. He also offers a free pickup service for folks with old, unrepairable chainsaws, offering to drive over, collect them, and add them to his ‘bone pile.’

A part time photographer, Mike recalled winning photo awards, judging photos, and starting the 4-H photography division for the Whidbey Island Fairgrounds and Events Center in Langley. He once owned Whidbey Saw and Cycle, which he built in 1969 and ran for the next couple of decades. It closed after multiple burglaries, a burglar broke in and shot his German shepherd, and the store insurance was cancelled.

“That S.O.B., his idea of a good time on a Saturday night was do burglaries and kill my dog,” Mike recalled, still upset at the loss of his pet. “I hope in a future life I run into him. He’s not going to be happy.”

Much later on in his long and interesting life, Mike said friends told him they had trouble finding someone to fix their chainsaws.

“I thought, why the heck not?” Mike said and started his business once again.

This is Whidbey’s photographer David Welton went to three places on the island who couldn’t repair his saw.

“I was told Mike was the chainsaw guru of the Northwest,” David said, adding that his equipment was fixed by Mike.

Chainsaw repair season gets busy about the time the weather starts to freezing, Mike noted. “People think they have to get their firewood ready.”

While visiting his sheds and looking at all his stuff, Mike joked that he’s not retired, “Just tired. I haven’t gotten to the ‘re’ part yet. It’s kind of neat, too, since I’ve had a background in manufacturing, engineering and machining. Rather than having to order a part or a special tool, often I can go to my machine shop and make the specialty parts and tools.”

For competitions in the 1970s, Mike built a racing chainsaw for the Echo chainsaw company. It earned him a 1976 newspaper article touting his talent: “Mike is the best in the industry at hopping up saws,” the article said. Mike mentioned that Echo consulted with him and later used his designs in one of their models.

Regarding safety, Mike never lost any fingers or other body parts and handles chainsaws with finesse. He said when used properly the tools are safe. “You keep a good grip on the handles,” he said.

Music is another hobby Mike enjoys. He will play at Ogres Brewing at Bailey Corner in Clinton this Friday, March 25 between 5 and 7 p.m. His business card for music reads: Mr. Completely. Folk, country, classic rock, blues and more.

Starting out with a ukulele he got for Christmas years ago, he moved on to playing guitar. Before attending Western, Mike went to Whitman College in Walla Walla for a while. He bought a 12-string guitar. He played, but not regularly. When he transferred to Western, he met up with a rock band guy he knew from Walla Walla, who asked Mike to join the band. He had a story for that experience:

“He said, ‘get a Fender Stratocaster. Come over this weekend and I’ll show you what to do.’ On a Friday afternoon, he showed me some chords and rhythms. I practiced day and night. My fingers were bleeding. Monday night we had a band practice. Three weeks later we played dances. Shortly afterward, the local rock station sponsored us. We also became the house band at a little coffee place in the pre-drug era. People came in to play chess, drink coffee and tea and watch the gogo girls dance—no nudity—it was like the Ed Sullivan Show. The place was called The Establishment. We were the Establishers. That was 1967.”

The Ed Sullivan Show was a popular TV variety show, which aired from 1948 to 1979, and featured popular and new entertainers of the times. The Beatles appeared on the show, attracting a then record-73 million viewers which helped propel them into über fame.

These days Mike does solo gigs. He recalled fun times playing at Langley’s now-closed Dog House, in the days when the building was supported by skinny wood pilings that were not stable. This was in the late sixties, early seventies. His band was the first resident South Whidbey rock band named the Headstone Band.”That place was packed like you couldn’t believe,” Mike recalled. “The whole building was swaying. We were very lucky that building didn’t collapse.”

Besides everything else he’s done, including a time chairing the Island County Marine Resources Committee in the early 2000’s, Mike added that he used to race boats, go carts, and motorcycles, and showed us a photo from his younger days.

He fly fished and worked as a fly fish guide in Alaska and set nine world records for his salmon and trout caught on fly rods. “For setting records, you had to buy special leader, take pictures, certify the scale for weight, and send it in to the International Game Fish Association. With an 8 lb. leader, I was able to catch a chum salmon at almost 16 lbs. It took, like 40 minutes, to land it. After catching my fish, I usually released them. But we had that chum for dinner.”

These days, he says it’s fun to see old-timers he knew who come by to get their chainsaws fixed.