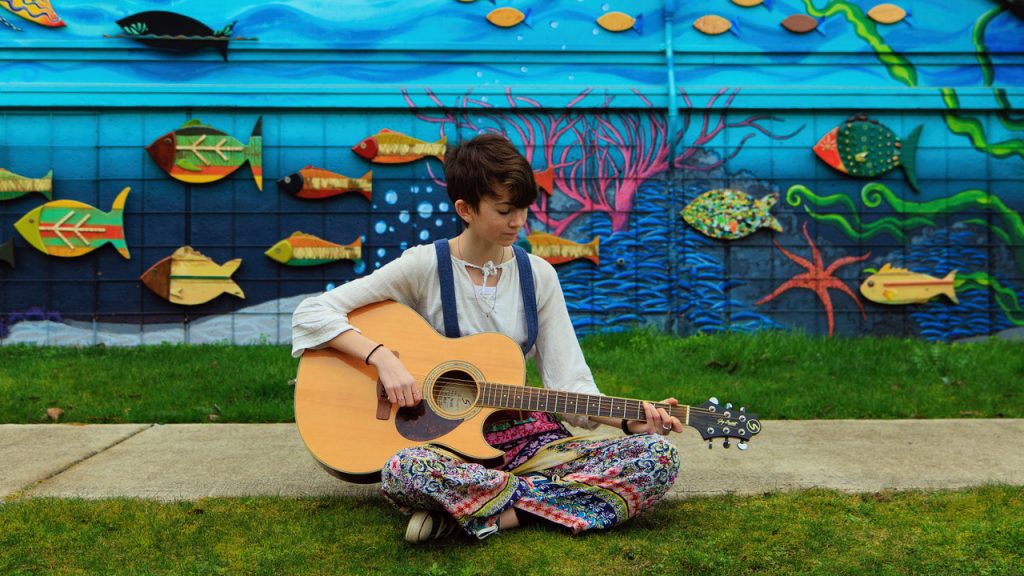 Anja Bentsen, a 7th grade student enrolled in the Alternative Learning Experience program with the South Whidbey School District, performs one of her songs. Her songwriting and performance are part of her curriculum.

Performing during Langley’s Mystery Weekend last February gave seventh grader Anja Bentsen a chance to practice tunes she had been working on for months. Later this month she will record her songs in a studio.

“It felt better to busk with people I knew and not just by myself,” Anja said of sitting with her friends outside the Clyde Theatre while she sang and played guitar, and they accompanied her on drums and maracas. “We got $7.”

Anja’s song writing and recording her first CD at Bear Creek Studio in Woodinville are also part of her middle school curriculum.

Her homeroom teacher is Andrew Fersch, one of the faculty at South Whidbey School District’s new Alternative Learning Experience Program for K-8 students that debuted last fall. Seventy students are enrolled in ALE, which is taught at the Organic Farm School in Clinton, and at the South Whidbey Community Center in Langley.

“A lot of what we do is place-based and project based,” Andrew explained of the program, which is partly taught with faculty and partly with parents. “For instance, the students are working on restoring the wetland behind the community center at the South Whidbey Community Center, adding bike lanes, adding compost to gardens, and working on getting ordinances passed with the Langley City Council to reduce waste. We try to incorporate subjects that fit in authentically with the students and projects we’re working on.”

“I started writing music at the beginning of the school year,” Anja added. “It’s been a learning experience. A way to grow my musical self. Music is a big part of me. Recording it is a learning experience to see what it feels like. I might like to record something more in the future.”

Andrew found the Woodinville venue for Anja, located in a barn in a secluded and quiet setting. She will work with experienced engineers and producers to create a CD. Anja’s family and friends support the venture financially.

The seven songs reflect, in part, Anja’s life so far.

“They’re about transitioning from elementary to middle school, friendship, family, and relationships,” Anja added. “My songs are stories I’ve thought up in my head. I wrote a song called Little Mouse.”

The teen loves animals and reading about them. Part of her songs come from dreams and Little Mouse is about coming of age, reflecting Anja’s life.

Like her mother Katrina Bentsen, Anja was born on Whidbey Island and has lived here her whole life. From early on Anja was immersed in music. Katrina plays guitar, and so does her brother Kyle Collins.

Katrina recalled Anja’s learning song writing skills with Uncle Kyle. “When my brother comes over, he plays chords on a guitar. Anja will sing any lyrics that come to mind. It’s a jam session,” she said. Anja’s love for music has also been nurtured by her marimba teacher Dana Moffett, and her guitar and vocal teacher, Levi Burklē.”

It was natural that music would later weave itself through Anja’s classes within her school program.

“In ALE, I’ve learned skills that I had I didn’t know I had,” Anja said. “It felt good to bloom. With my music I’m being educated. By learning how to use words in my music and to find the chords to fit with the stories I’m making up in my mind, I’ve grown in the past year and I keep growing. I am finding myself.”

Anja said she enjoys the classes that Andrew Fersch teaches, which include writing, community projects, and social studies. Andrew and his wife, an environmental writer, moved to the island last year from Portland, Maine, where Andrew taught for two decades and ran an alternative school.

“There’s a lot of great work happening in the whole district and the ALE is just a different approach,” Andrew said. “And a great fit for some students. I’m really impressed with the number of options afforded to local students, and that credit goes to the district and the community.”

One of the options, the new Alternative Learning Experience program, is described on the school district’s webpage as “…public education in which some or all of a student’s learning happens outside of a traditional school schedule. Families enrolled in the SW ALE have the option of registering students in some or all of our in-person ALE classes, or to provide all instruction at home or in the community, with the support and guidance of a certificated district ALE mentor teacher. The mentor teacher and the family collaborate to develop an individual student learning plan that serves as the framework of your student’s learning.”

With Anja’s learning plan, for instance, Andrew worked with her family to cultivate her song writing skills.

“They’re very good songs, “Andrew Fersch added. “Anja’s played in front of community gathering nights in front of an audience. Her writing has vastly improved during the year. The fact that she loves the thing she’s studying and doing poetry adds to her learning. Teaching is an absolute joy when students like Anja can learn and grow. Pretty cool stuff.”

Anja’s sister Kaia is in third grade and she is in her element with riding horses. A friend of Katrina’s has horses that Kaia describes as if they’re good friends, especially Snowball, a white horse. Kaia was full of excitement during the interview knowing she would be fitted for a saddle on Snowball later in the afternoon.

“A fact about white horses,” Kaia said. “They love getting dirty the most. Whenever you just brushed a horse they will get dirty.”

Kaia is also enrolled in the ALE program where classes are held at the Organic Farm School. Her ALE expedition class, in part, explores the question, ‘what can water teach us’ through scientific, literary, social-emotional, and mathematical lenses.’ Bees, gardening, and Native American studies are recent additions to this underlying theme of water.

Meanwhile, Anja has an idea for her CD cover art that she plans to design. We look forward to her debut album.