A man who pays it forward in helping families stay together 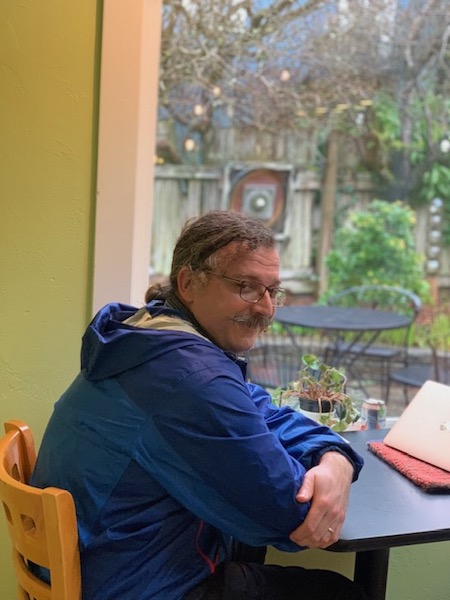 Jeremiah Donier retired from working at the Langley Library to become National Family Impact Program Manager with Parents for Parents, a program run by the Children’s Home Society of Washington, which was founded in 1896. Photo by Kate Poss

Locals may know Jeremiah Donier as the friendly and helpful library assistant at the Langley Library. They may not know that, as of March 1, he became the National Family Impact Program Manager with Parents for Parents.

Parents for Parents is a program run by the Children’s Home Society of Washington, which was founded in 1896. Historically the society focused on foster care. In recent years, it transitioned to keeping families together through early investment in child and family well-being.

“They’re scared when foster care happens,” Jeremiah said of parents who face having to give up their children. “A parent ally like myself will say, ‘We’ve been there, we can get you connected to resources that offer emotional support and guidance. Birth parents who lose their children to foster care can be stigmatized.”

Jeremiah said he received life-changing counseling when struggling with how to be a father. His daughter Roslyn was born 16 years ago. Then he and his wife Helen lived in Spokane. He recalled family generational patterns, which left him unprepared for parenting. The couple’s daughter was cared for by relatives for her first 14 months—with regular visits by her parents—while Jeremiah and Helen learned how to manage their emotional health. Jeremiah said the times were difficult, yet led him to discovering tools for coping and parenting that he gladly shares today.

“I was in counseling for two years,” Jeremiah continued. “I had fawning responses and cared for everyone else but myself. When situations seemed out of control, I was emotionally not present. My breakthrough came when a counsellor saw me using that response when my daughter was crying and I went to heat her bottle. She saw I was upset and said, ‘Let’s talk about how you’re feeling. That’s the first time someone noticed I felt like this.”

Fawning is a response in which one reverts to people-pleasing behavior to avoid conflict or overwhelming feelings.

“It’s hard work,” Jeremiah continued. “Parents are afraid. Dads, especially, are angry and mask their emotions when they don’t know what to do. We work with the families to avoid their blowing up in court or with an attorney. A listening ear provides guidance on alternatives.”

The program helps parents take care of themselves and to turn away from poor life choices made in the past. Choosing to avoid negative people, bad habits such as drug and alcohol use, and turning toward resources such as the library, the church, and other support groups, which help make a better social connection, are foundations of the program.

While working at the Langley Library, Jeremiah looked at ways to connect the community with the generous resources provided locally and within Island County. He created a handy brochure, which South Island libraries and local businesses now distribute: South Whidbey Resources. It contains a QR code for downloading on smart phones.

Vicky Welfare, manager of the Langley Library, commented about Jeremiah and his devotion to helping others.

“Jeremiah started at the Langley Library as a Page and eventually became a Library Assistant, helping serve customers at the front desk and with using library technology,” she wrote in an email. “In the pre-Covid days he also created and presented a few library programs around the theme of resources for families. Jeremiah is very community-minded, and has always been eager to help customers connect with the information and resources they are looking for. Langley Library customers have especially appreciated his patience and helpful approach with helping them navigate our online resources, and mastering the mysteries of the printers. He will be missed, but we are very happy that he has found an opportunity that seems to be the perfect fit for his skills and interests.”

While working at the library Jeremiah continued to volunteer with the Children’s Home Society of Washington, an agency focusing on foster care and birth parent mentoring. As a volunteer there since 2009, he helped children remain in families rather than in institutions.

He mentioned five factors that can help make families stronger: cultivating social and emotional competence of our children, knowledge of parenting and child development, concrete support in times of need, parental resilience, and social connections.

After going through counseling in Spokane, Jeremiah became involved in parent mentoring. He wanted to pay it forward. The tools he learned were noticed in the greater community. His success story was recognized by the American Bar Association more than 10 years ago.

“I am not someone who boasts a whole lot,” he said. ’After posting my story with the American Bar, my wife and I were named as co-recipients of the Reunification Hero award.”

The award is given to those who persevere and use compassion to hold families together.

Jeremiah chuckles at his good fortune and said his “parent advisory resume is three pages long. If I put everything in that I’ve done, it would be 20.”

He likes to repeat the mantra of the Washington State Parent Ally Committee: “People change. Families reunite.” WSPAC is a grassroots state-lead group Jeremiah joined in 2009.

“I work with a lot of people who are sharing their knowledge,” Jeremiah said. “I work with people who are experts in helping others. If you’ve been through it, you can help others to de-stigmatize society’s view of parents who lose their children to foster care.”

“I acknowledged coming into this space as a white man and they helped me unpack white privilege,” Jeremiah added. “Them unpacking for me…wow…I can’t sit on sidelines. I learned you can’t oppress people the way we’ve been doing, and the fact that this goes on generation to generation. I’m going to be an ally. I will stand up and let people know they’re human. I want them to feel welcome in the global village. If it takes a village to raise a child…then how are WE part of the village, I ask?”

Starting in 2012, Jeremiah volunteered with other Washington State Parent Allies to expand the Parents for Parents program from Spokane and King counties to the entire state.

“We advocated for funding and talked with host agencies like Island County’s Juvenile Court to expand it to every county by 2021,” Jeremiah added. “I am so excited to step into my new role to help implement and expand the program in other states and jurisdictions, which hopefully includes developing respectful partnerships with tribes.”

Having moved to Whidbey nearly nine years ago, Jeremiah said he is impressed by the volume of community services available here. His new job will allow him to work remotely across the country, adapting the program’s model to communities and varying cultures.

He doesn’t sit around angsting like he used  to before he learned there were tools available to help.

“I write my thoughts out and think how to make it more forward thinking,” Jeremiah noted. “I’m very future focused and can see trends sooner. I don’t care where we were at yesterday. I’m for building bridges for the future. I don’t build walls, I build bridges.”