The human right to shelter 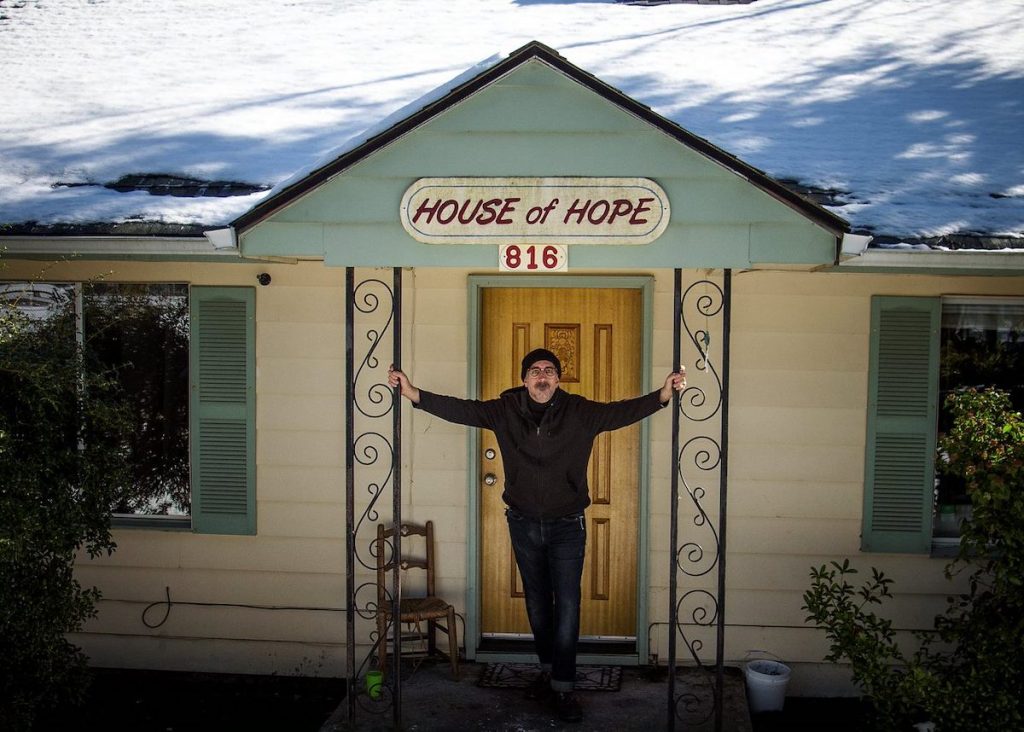 The House of Hope has given Chris Boatright a place to live and peace of mind. He works at the South Whidbey Commons

On Christmas Eve, 2021 a woman sat in the alcove of the Langley Library shouting curses. Most of the public walked by, turning their heads away at her pain.

Coyla Shepard, founder of Tiny Houses in the Name of Christ—or THiNC, a village of 9 tiny homes under construction in Langley, did not look away, and was visibly shaken, seeing the forlorn state of the woman, and attempted to help her. Local businesses in Langley said they told the woman to move on. Her erratic behavior resulted in a call to the sheriff’s office, but she committed no crime, and was told to move on. No one knew her name.

Frigid weather was predicted, with snow and temperatures dipping into the teens. My husband Bill and I drove around later, trying to find the woman and give her an extra down sleeping bag. She had disappeared.

Contacting Judy Thorslund, who founded and served as president of the Whidbey Homeless Coalition, we learned the woman’s name is Christine, a troubled woman who lives outside and has been seen around South Whidbey the past few months. After Christine was found seeking shelter outside a business in Bayview last month, Judy wrote on a Facebook post that Island County Human Services had been contacted, Christine denied help from them. The staff gave her a tent.

In Christine’s case last month, Judy documented the actions of Good Samaritans:“…two fabulous and caring woman found our friend, helped her clean up at the marina, and found a safe place for her tonight. Thanks to all the County Human Services for your work. In so many situations like this it is one day at a time as we know. Thanks to tonight’s host, and to a neighbor bringing dinner. Flowers and love to to you all! Tonight she can sleep safe and sound.”

While Judy has since retired from the day-to-day running of the Whidbey Homeless Coalition, which she started in 2014, she remains a fierce advocate for the island’s marginalized and and vulnerable population. A prolific writer of Facebook posts, Judy wrote of Christine on Jan. 31: “Verse of the Day. And the crowds asked him, ‘What then should we do?’ In reply he said them, ‘Whoever has two coats must share with anyone who has none; and whoever has food must do likewise.’ Luke 3:10-11.”

Tanya Stager, interim executive director of the Whidbey Homeless Coalition, has worked with Christine, who was housed temporarily in Oak Harbor at the coalition’s popup shelters in several churches collectively called ‘The Haven.’ Christine opted to leave the Oak Harbor shelter, as is evidenced by her South Island sightings. If she is encountered, Tanya advised, “Say her name. Stop and ask if anything is needed. Ask: ‘How can I help you?’ Our homeless need compassion.”

Corey stands with a cardboard sign asking for help at the Star Store, on Bayview Road near the Goose Shopping Center, and Payless Foods in Freeland. He said he injured his back doing construction work and cannot work. He rides his bike to his destinations where passers by give him donations to get by. He lives in  a shack on a friend’s property, which was used as a shelter when dynamite blasting. He said he wanted to find a better place to live.

Cameron is a young man, a talented artist, who has had numerous meltdowns in Langley. Locals say he is currently hospitalized.

Chris Boatright was homeless after a South Island construction project he was helping a friend with fell through. Chris currently lives with eight other room mates at the House of Hope in Langley, and rides his bike to the South Whidbey Commons, where he works as a charismatic barista. The army veteran and former standup comedian said he would probably be homeless in Portland because it is too expensive to live there.

“I feel cared for and respected,” Chris said, of his staying at the House of Hope. “There is compassionate understanding here. The wildlife—seeing the deer and rabbits—has changed my life. I was a city boy.”

Sitting at the kitchen table with Chris, Judy Thorslund, who has lived on Whidbey Island since 1977 added, “Chris and I met and we knew we were like-minded. Cameron, Christine, Corey—Dorothy Day of Catholic Workers said we must serve the least among us. I’m called to serve. The only solution is loving our neighbor.”

Engaging with the least of our brothers is Judy’s calling. Judy is a follower of Dorothy Day, founder of the Catholic Worker Movement and its approach to working with people down on their luck. “The biggest challenge of the day is: how to bring about a revolution of the heart, a revolution that has to start with each one of us,” is one of Dorothy Day’s famous quotes. Judy once volunteered with the organization and integrated its principles into her core being. The altruistic collection of dedicated volunteers runs 187 Catholic Worker communities. They are committed to nonviolence, voluntary poverty, prayer, and hospitality for the homeless, exiled, hungry, and forsaken. Catholic Workers protest injustice, war, racism, and violence of all forms.Catholic Workers run houses of hospitality in Seattle and Tacoma.

THiNC embodies the Catholic Worker compassion ethic in Judy’s thinking: “Because of my love and respect for Coyla, I am with THiNC. Philosophically they’re where I am. THiNC gives people the chance to give their gift of volunteering. It’s the greatest thing in life. Don’t keep it to yourself. Fill it up.”

On Feb. 24 Tanya Stager took part in the annual ‘Homeless Point of Time Count,’ which counted the number of people without homes, or those living in shelter without water or heat on Whidbey Island. While exact numbers are withheld until the agencies she reported to post the numbers, Tanya said those living without homes or in substandard shelters number over a hundred.

The Washington State Dept. of Commerce and U.S. Dept. of Housing and Urban Development conduct the yearly survey, and allocate grants to local agencies and non-profits based on the numbers submitted.

Tanya added that many who are living without homes or adequate shelter prefer to stay hidden.

“There’s people I work with who do not wish to disclose their situation,” Tanya added. “There’s a stigma to being homeless and they get scared.”

Judy Thorslund added that Christine, Corey, Cameron and Chris represent a fraction of the total people who are living without homes on Whidbey Island. Many prefer to remain unseen.

Why so many of the island’s residents with inadequate shelter remain hidden is because of how society views them, Judy added.

“Society demonizes homeless people,” she said. “The numbers of homeless are climbing and it makes me nervous. [In Christine and Cameron’s case] the city of Langley needs a plan when someone shows up attracting negative attention. Let’s have a coordinated approach. Fear rules our society. It’s so sad. We are told, ‘do not engage.’”

Mary said of the 1,200+ eligible students within the district, her group has identified more than 75 children and teens who live with their families, couch surfing with friends and relatives, in RVs and trailers, in houses without adequate heating, water, and sometimes in moldy and rat-infested conditions.

It’s a full-on crisis,” she said. “Families are having to move away. People who work in restaurants, gas stations, who take care of our elderly, they can’t afford to live here. What’s going to happen to those of left us behind? I have a family living at the Harbor Inn, paying $1,800 a month to live in a motel room. Property management companies won’t allow them to rent at that rate because they don’t have a credit history and have been living with family. Another family lived in a mother-in-law house. They had to move out during COVID because the house was occupied by the owner’s relatives. They moved into a trailer with two dogs. If you add that to the picture, there’s a whole layer of unavailability. The majority of families I work with are doubled up, living with family and friends. They’re considered unstably housed; a whole family in one room.”

Finding a solution for affordable housing is an ongoing task in Island County, its cities, and non-profits.

For further information regarding housing assistance, visit these websites:

If encountering someone with mental health issues, call Island County Mental Health at 360-969-1855.

The Langley Library has a brochure, South Whidbey Resources, which lists contacts for Food and Free Meals, Housing and Shelter, Clothing and Supplies, Cleaning and Showers, Financial Support, Transportation, Social Connections, Health and Wellness, Child and Family Care, Education and Schools. Serving Clinton, Langley and Freeland, the guide lists free and low-cost services and support for individuals and families within the South Whidbey School District.  Scan this QR code to download the latest guide to your phone.