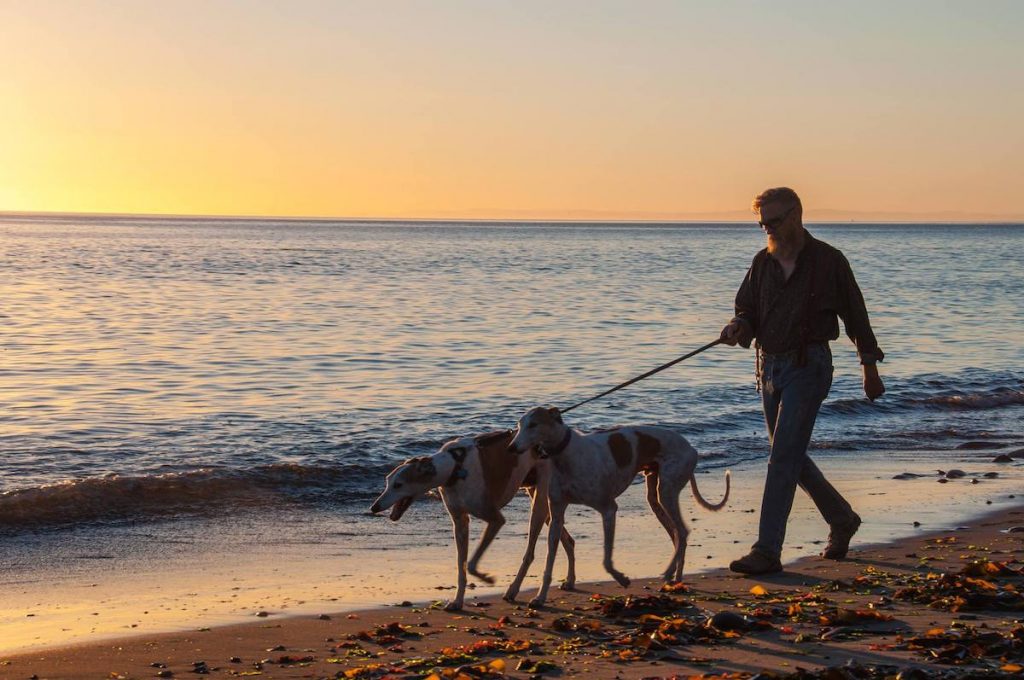 Brian Mahieu walks the beach with his adopted greyhounds Commando and Pine. Photo by Tom Harris

Our former neighbors Robin Reich and David Ryan used to walk their pair of greyhound Whistle and Olwen along the alley in our Bells Beach neighborhood.

The animal and human parade made an unforgettable sight—two sleek dogs with intelligent faces accompanied by a big white longhaired cat named Jean Claude. I learned that Robin and David were involved in greyhound rescue and adoption.

The perils of dog racing, the dogs’ maltreatment, and the worldwide attention to greyhound welfare has raised awareness and resulted in the closure of dog race tracks worldwide. Greyhound racing is still legal in Ireland, Vietnam, Australia, the United Kingdom, and West Virginia, Iowa, and Arkansas in our country.

Greyhounds, gentle, loyal, and fast runners, date back more than 4,000 years to ancient Egypt. Believed to be earthly incarnations related to the dog-headed god Anubis, greyhounds were pets of Cleopatra and King Tutankhamen.

In ancient Greece greyhounds were trained in coursing—a sport in which the dog chases its prey to kill it. Roman soldiers took greyhounds with them on the battleground. In Europe greyhound ownership was limited to those of noble birth. Commoners with greyhounds could be sentenced to death.

Later, the Spanish brought greyhounds to America in the 1500’s. They were imported in greater numbers to the Midwest during the 1800s to help control a population explosion of rabbits.

Greyhounds and other breeds such as Afghans, Borzoi, and Whippets are Sighthounds. Sighthounds sight a running animal, be it a rabbit, squirrel or deer, and run in a quick burst to capture it. The dogs’ bodies evolved over centuries into elongated, aerodynamic forms with little fat.

Greyhound racing began in 1919 in California. While rabbits were used at first to lure the dogs to gain speeds up to 45 mph, public outcry led to the use of mechanical lures instead of live animals. Later, reports emerged that the racing dogs lived in poor conditions, were sometimes drugged with cocaine to run faster, forced to perform while injured, and killed without a second thought when they could no longer perform.

National Geographic published a March 2021 story about the closure of greyhound racetracks. In its article, They’re Off and Gone, viewed for free with a Sno-Isle Library card, greyhound neglect and abuse is described. GREY2K USA Worldwide, a greyhound advocacy organization, spent 20 years documenting the dogs’ abuse in the once multi-million dollar industry, and helped close down many of the most notorious racetracks.

Robin Reich was raised in New York with a family who loved dogs.

“Growing up in Brooklyn, our family always had stray dogs that we rescued directly from the streets,” Robin said. “When David and I met and moved to Seattle I was really missing having a dog. So when David saw a poster at Grand Rapids airport advertising greyhound adoption, we had our first greyhound within a month.”

The couple adopted their first greyhound more than 20 years ago. Robin began learning more about their plight and became immersed in greyhound rescue the past decade. She volunteers with Greyhound Pets, Inc., a Woodinville nonprofit that provides care for former racing dogs until they are adopted. The nonprofit found homes for 153 greyhounds in 2021.

“Within a month of having my first greyhound I was obsessed,” Robin said. The more she learned about the dogs, the more she wanted to help them.

In her blog, Robin described a rescue mission she was part of, visiting the Canidrome in Macau, which was closed in 2018 due to international pressure. Robin was asked to photograph and assess the abandoned dogs by greyhound rescue and protection nonprofit GREY2K USA Worldwide, and Pet Levreri, a greyhound adoption association based in Milan, Italy.

“I never expected to find any light in such a dark place as the Canidrome in Macau where 18,000 greyhounds had been killed over five decades just for being too slow, sick or injured…but I did,” she wrote in the blog. She cried at the condition of the animals held in concrete enclosures with rusting metal bars. Yet they looked to the volunteers with love and trust. After two weeks a number of the 532 dogs held there were sent to good homes. “We wished happy lives to the greyhounds heading off to a new start. They were placed in flight crates and then into cars to begin their long journey by first crossing the new 55 kilometer Hong Kong–Zhuhai–Macao bridge to the airport in Hong Kong. They were finally getting the second chance they so deserved…….a life of freedom, a loving forever family and a soft bed, something they had never known.”

From Bell’s Beach, Robin and David moved to a home they built in Langley a year-and-a-half ago. Whistle died two years ago.

The couple adopted another former racetrack greyhound Lili last year on Robin’s Feb. 11 birthday. Jean Claude the white fluffy cat, developed cancer, went out one day and didn’t return. David took Lili for a walk afterwards and she began sniffing what looked like an anthill. She found Jean Claude buried there, David thinks a coyote did the deed, because the cat had a pair of puncture wounds on his neck.

The couple said their greyhounds are couch potatoes these days, unless they’re out on a walk, always leashed, because they are Sighthounds and prone to chase after squirrels and rabbits.

“Olwen and Lili are former racing dogs,” Robin said. “Lili was a track racer from a track in Naples, Florida. Olwen did live coursing with live rabbits. Her owner was going to put her down, because she wasn’t a champion like her dad. She was rescued and and sent to Greyhound Pets, Inc.”

Olwen will turn 8 and Lili 4 next month.

“Lo and behold we were moving out and they wanted to move to Whidbey,” Brian said in a phone call last week. Brian was grieving the loss of his beloved greyhound Commando, who had died just the day before. “It was seamless. Two greyhounds moved out and two moved in.”

Tom and Brian have fostered more than a dozen rescued greyhounds, including Commando, who they adopted into their family, which also includes a recent adoption Killian, a long-haired German Shepherd.

“These are highly affectionate pack dogs who all got along famously,” Tom wrote in an email. “Overall greyhounds are incredibly easy to work with, train and live with. Our two boys, Kai and Commando made sure the order in the house was known and they helped work these fosters into good house dogs. One dog was adopted entirely on the notion that he was a fabulous therapy dog. He saved a life while being saved.

“Kai and Commando bonded and became mentors for the 14 dogs we fostered as well as us!” Tom added. “Our fosters ranged from retired racers (including Commando’s brother Code Red) to hard luck and abused dogs. All found happiness in loving homes and many hit it off on the first meeting with their new families.”