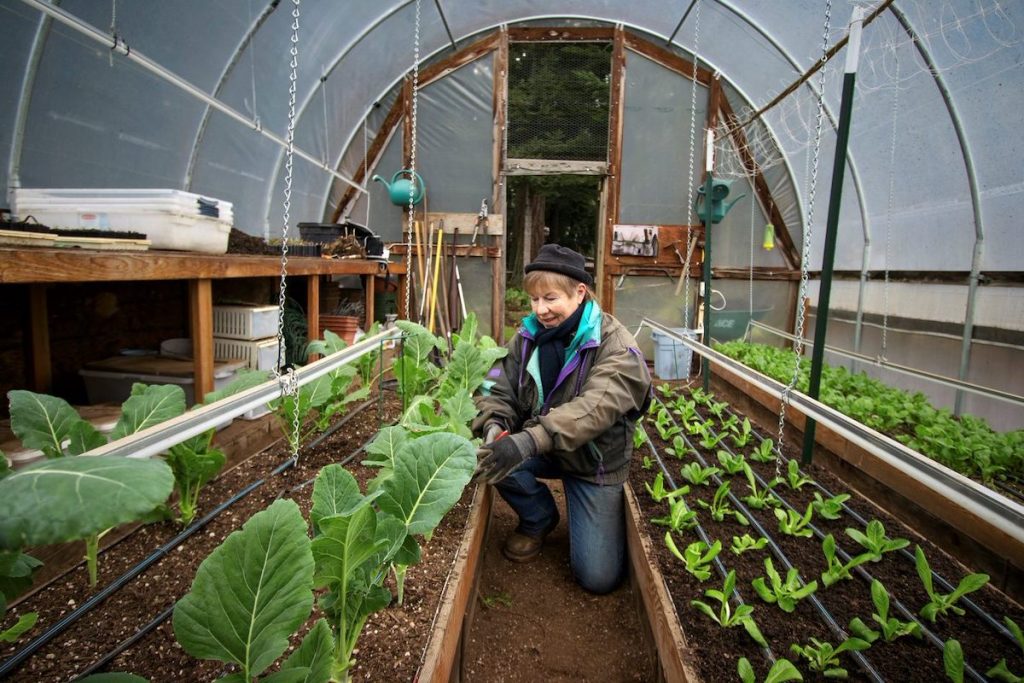 Pam Mitchell tends plants in raised beds built at Fireseed Catering. This greenhouse forms a warm nursery for new plants that will be sold later at the Bayview Farmers Market.

For Pam Mitchell, any day not in the garden is not a good day. Many know her as the iconic black-hatted friendly vendor who sells plants and veggies at the Bayview Farmer’s Market. She sings the praises of playing in the dirt among growing things.

Buying property in the Maxwelton Valley in November 1998, Pam was a vendor at the first Bayview farmer’s market the following year. While gardening is her calling, it took years of working other jobs before she could devote herself full time to the craft.

“I was living on the mainland, in Woodinville, and came to the island with a guy I knew,” Pam said while we visited at the Flower House Cafe at Bayview Farm and Garden. “We fenced in a small area, 50×50. I made raised beds and grew everything. Really got into germinating seeds under lights. We built (what looked like) coffins on legs, put lights under the lids. Put heating mats underneath the soil. Our land had a lot of buildings, hollow shelled, that we framed in and insulated and created a grow area. Basically we got the land going the following year. By May we were selling at the farmers market. I remember the opening day we made $50 and we were thrilled. It was the first time we had been on the other side of the transaction.”

Pam learned to love growing things and was taught customer service skills at an early age.

Born in Cape Town, South Africa, and growing up surrounded by vibrantly colorful plants such as bougainvillea and jacaranda trees, her love of flora started early. Immersed in this Mediterranean climate, Pam said she always felt comfortable growing plants and became good at selling to the public.

“When I was 9 or 10 my father had a stall at a flea market,” Pam recalled. “I helped him sell and became familiar with our customers and handling money. At the end of the day he paid me and I went to the next stall over and bought plants. I still do that and go to the nursery.”

After moving to the states, Pam lived a while in northern Idaho and tried to make a garden. But the local cows were allowed to wander free and munched everything she planted. She moved to Seattle.

“Once I got to Seattle, it was better,” she added. “I had a pea patch while living in various apartments. I once spent 12 years walking to school and back when I lived in South Africa, and I love to walk still. In Capitol Hill I walked to downtown where I worked in administrative jobs and worked at local nurseries. I could make money at the first jobs, not the second.”

Even after moving to Whidbey, she continued working for Boeing to make a living. Plants continued to be her passion. Taking the ferry every day to the office was not.

“The commute every morning!” Pam said. “Oh nasty. I was finally able to release myself from that by the beginning of the century, in 2003.”

She was managing the Bayview Farmer’s Market by then. And she met someone who would change her life,  provide her with the living space she has today, and the gardens she continues to tend and expand.

“I met Dawn Noble from Fireseed Catering before they (Dave and Dawn Noble) set up the business they have today,” Pam explained. “Dawn approached me and we talked. She learned I knew about gardening. She was interested in creating community. She wanted someone to build a place to live in on their property. I had some capital from a previous living situation. She showed me a 7,500 sq. foot barn with a loft. Then it was made of plywood and was only a shell of a barn. I walked the property. I said sure. I’ll build a place for myself to stay.”

A living space was built in the loft. Since then the lower barn was remodeled into a comfortable venue. The Nobles built a pair of commercial kitchens. Back in 2003 Dawn offered Pam a quarter acre to cultivate.That acreage has since expanded to include ornamental gardens, hoop houses, raised beds and walking paths. Pam said whenever she asks the Nobles about creating another garden, they tell her: “Sure. Sure.”

“That started an 18-year journey,” Pam noted. “I moved there in June of 2003 and worked the garden. I quit Boeing. Started doing administrative work on the  island for a while. I worked at growing the farmer’s market business as much as I could. I expanded Fireseed’s gardens. Finally the perennials were generous and spreading. I separated them and started potting them up and selling for them $5 each. I used the veggie compost for the soil.”

Meanwhile, as Fireseed’s gardens expanded and the landscape acted as a backdrop for weddings, the business thrived, thanks in part to the multi-talents of Dawn and Dave Noble, and their experience in cooking, baking, and hosting gracious spaces. Part of the success was due to the welcoming landscaping Pam helped design, creating a living outdoor setting guests noticed.

When COVID hit the scene in March 2020, locals limited their travel and redirected their budgets to home improvements. Pam began to advise folks about landscaping and gardening. Her landscaping business bloomed.

“At this point, my business has grown. I’ve brought in a crew—a young man. A young woman, and Shirlee Read, (now retired from running her popular Kitchen Door pie booth for years at the Bayview Farmer’s Market.) That woman knows how to work!”

Back at Fireseed, Pam practices regenerative farming. Its premise is centered on maintaining beneficial fungi and organisms in the soil, instead of tilling them away.

“I’ve been no-till for years,” Pam said. “I tilled the veggie garden once to get things broken up. Scraped the soil to create the walkways. The scrapings created dirt I used for my raised beds. The mounds, which look like horse graves, I frame myself. I can bang together a few things. Recently we got some 2-inch boards, from Rolland Quade (a general contractor and owner of High Pitch Construction) that he mills on his property. The price per linear foot is very reasonable. Now the garden has some very deep raised beds, which the plants love. I do drip irrigation. It’s really efficient. I use a sterile mulch from Whidbey Topsoil. I’ve installed trellising in about 50 beds, every third bed along the long east side, so the sun shines from the west and the beds get the afternoon sun. I can grow peas, beans, cucumbers, tomatoes on the trellises. They give me extra growing space.”

Each year Pam adds mulch to maintain a healthy soil community. She’s taught classes on the subject of regenerative farming and uses the metaphor of weather’s impact on real people to make her point about conserving soil organisms.

“If you lived in a community and a tornado obliterated it every year, how long would you continue building?” she asked her students then and mentioned this in our chat now. “Tilling destroys the community and exhausts the soil. Mulch on the soil brings the earthworms up. They do the tilling for you. They create downward tunnels so water from drip irrigation runs down. It’s all connected. I have trillions of workers in the soil. All they ask for is a little organic matter.” Pam chuckled at the notion of the trillions of soil workers. She believes in working with nature: “Those that try to control nature, will always lose.”

Talking about healthy soil prompted a memory Pam recalled when living in South Africa and she literally ate the garden dirt.

“My mother tells me I used to sit in the garden and eat buckets of soil,” Pam said. “She was horrified at first. I maintain because I have the garden inside me, that’s why I have to garden. The biome (bacteria that live in our intestinal tract) are fascinating,” Pam added, linking the parallels of soil health with gut health. “I’ve found out so much. We are multi-organisms. We host so many different things we could not live without. It makes sense when you change your diet, you start to crave that which you’re missing. If you’re sick, the bacteria are screaming for nutrition. Likewise with the soil. The custom blend fertilizer incorporates micro and macro nutrients, like magnesium, like calcium.There’s always something we can do to improve soil structure and design.”

Last year, Pam’s landscaping clients grew to more than three dozen. During this conversation she wondered how she would accommodate new requests for her work when readers see this story. She adapts to new opportunities.

The way she stays balanced nowadays is to work with around six clients at a time. Her style is to meet once a week on the same day for three hours, get paid for the work on that day, then meet again the following week. Her practice is not about tearing out and building a brand new garden, it’s more an evolution and learning process for her and those whose gardens she tends. She invites clients to tour Fireseed’s property to get an idea of what is appealing. Visiting the veggie garden, the greenhouse, the raised beds, observing how irrigation works, discerning preference for style, is an approach that works for her and her clients.

“Not only is your budget spread out with the way we do business, I encourage participation from the owners to give me feedback on what they wish to see in their garden,” Pam said. “There are people who want something beautiful. Or they want a cottage style. Or mixed borders and beds. We start with small trees in the back tier and lower plants moving forward, medium shrubs, tall perennials. I plant close so everything becomes a woven tapestry of color. The fact that I can bring in plants from my own nursery saves on cost. I like plantings which include a succession of flowers for the year. Usually only flowers in season are sold. The rest of the year, not so much. I can create something where you can have flowering happening throughout the year. Hellebores are out now. I plant for leaf form, shape, coloration. Leaves are what you see for most of year. Gold, red, purple—I love to mix and match them. You see all the plants. There’s nothing hidden.”

These days, she continues to walk, logging in 12,000+ steps a day on the land. She sees her work as a connector that weaves diverse elements together.

“No matter your beliefs, there’s always a commonality with plants,” Pam said. “People coming to the farmers market and seeing my plants and seeing how well they’ve grown, that they’ve had a good childhood, have good spring and fall foliage, make a present to a good friend, go to sleep nicely.”

She’s learned to landscape using “plants that play well together,” and do not compete against another. “I don’t like runners, or something that will colonize. I don’t like bullies. There are toxic plants to animals and people.” She removes those plants, as well as those deer and bunnies like to eat. “I hoik them.”

Hoik, Pam explains, is a word used in England, which means yank or pull out.

Pam finds therapy in gardens, doing the physical labor as healing. “It feels good to get it done.”

As she looks to the future, Pam envisions traveling down the coast, and visiting England for the Chelsea Garden Show. In the mean time look for her this April at the Bayview Farmer’s Market.