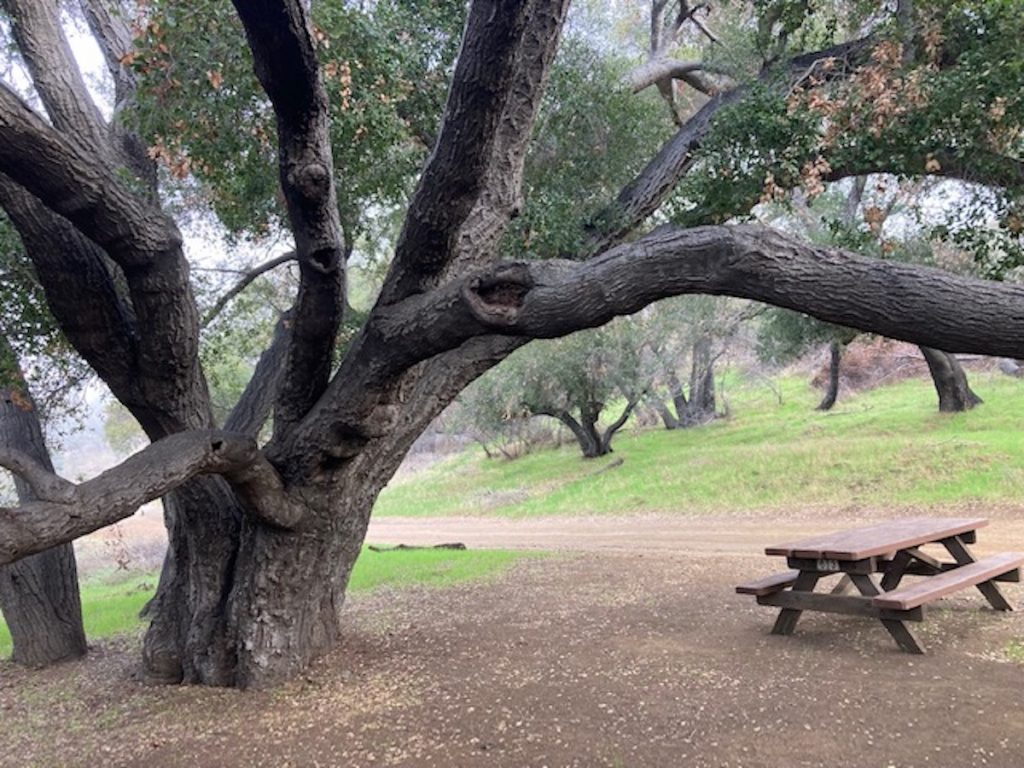 This is Chapter 5 of our On the Road series, traveling with Bertie the 2002 Ford Explorer and Marion, the 1979 Trillium trailer. We camped so far in Oregon, the Eastern Sierra, Arizona, near Palm Springs, Hemet, and visited Bill’s brother’s family in Coto de Caza.

Meanwhile, Marion had developed a puzzling electric problem, which started at Usery Park in Mesa, AZ. I noticed then a spark flash in the socket when plugging in our phone. A fluorescent light went out. Bill bought a couple of bulbs in Scottsdale. However replacing the bulbs was not the fix.

While staying overnight at my niece Janelle’s family’s place in Hemet, her husband Kevin checked and found a fuse was blown. We had spares. Bill replaced it and the lights worked again. While camping two night later without power at O’Neill Regional Park in Orange County, the battery-powered lights failed to light again. Bill checked and noticed the fuse was blown. We were getting worried.

Luckily we had our Luci solar-powered lanterns to light our cooking and reading. While I sat the next afternoon at a Mission Viejo Starbucks to avoid the 90° heat, writing story #4, Bill checked the wires leading to the fluorescent light. He re-spliced the wires, sweating inside the hot trailer. He nearly got his head stuck in the cupboard where the wires lay. He sported an abrasion on his cheek for the next few days. He replaced the fuse. But still no lights.

Oh boy, we thought we’d have to pay a lot of money for an electrician. I texted a friend who lived near our next campsite at Malibu Creek State Park, and she referred me to a good electrician. I phoned and left a message. Meanwhile, Bill thought our trailer battery was dead and looked to find a voltage meter. By coincidence, our camp neighbor next door had a voltage meter. He was helpful and found the battery connections were loose. The men tightened the loose wing nuts at the battery terminals and we had a fix.The payment for the services came in Bill’s listening to the many tales the man liked to tell. An old-timer now, he told of camping here during the 1960’s while a Boy Scout.

Relieved that Marion’s electric woes were repaired, I cancelled the electrician request. We left the well maintained-campground at O’Neill Park. Stopping for breakfast at the Irvine Whole Foods, market, we noticed perfect bodies, hurrying out of pricey cars. The center also offered eyelash services and yoga workouts.

We drove through congestion to Rancho Palos Verdes, where Bill’s dad’s cousin Frank Poss, and his lovely wife Kay have lived for more than 50 years. Frank is 92, and both he and Kay regaled us with Poss history dating back to the 1600’s. This couple is warm and welcoming and so very interested in life.

Saying goodbye to these lovely relatives, we decided to stop and eat before reaching our campground at Malibu Creek State Park. I Googled ‘food made with love,’ and found Jonah’s Kitchen and Bar, located in Santa Monica. Bill ordered a pulled pork sandwich, and I ordered an albacore ceviche with rice and veggies. OMG! Made with love is right. I enjoyed the flavor and textures and the sensation my taste buds conveyed. We were here to celebrate the 48th year of our first contact on Nov. 10, 1973, at a friend’s party. We would see this friend in a few days.

Arriving in the late afternoon on Nov. 12 at Malibu Creek State Park, we felt like we had come home. Before moving to Langley in 2000, we lived for 19 years in a mobile home park minutes away from this jewel of a state park. We had visited here often in the past.

In a major drought, we were surprised to see new green grass growing in the central meadow surrounding our campsites. While we had no electrical hookups, the solar-lit bathrooms were clean and moonlight lit the way for evening walks.

The sun went down the first night and we looked at the waxing moon through our neighboring oak trees. The crickets began their evening symphony. Good to see the Santa Monica Mountains and the silhouette of the venerable oak trees against the night sky.

Many mornings we swam at the nearby City of Calabasas Swim and Tennis Club. Being seniors, we paid $4 to swim in one of eight lanes in 80° water. After the first morning swim, I stopped for an ice coffee at a nearby Starbucks. It was getting hot—nearing 90°. The place was packed and while waiting for my drink I noticed a young man trying to balance two full trays of coffee drinks. I offered to help carry four of the drinks. Turns out he works at the local BMW dealer. He wanted to pay me $20 for my help and was surprised when I refused, saying where we live, we help each other.

We refilled our propane tank at a local dealer where we broiled in the sun while waiting. Returning to site 2 at the park, we ate a quick lunch and thought we could cool off at the beach. A heat wave was on and it seemed that all of Los Angeles had driven to the beach. Cars lined Pacific Coast Hwy. for half a mile beyond the beaches.

We stopped in at the Vintage Market, formerly the Trancas Market, and walked into a blizzard of tan and muscled bodies, showing lots of skin and exuding great clouds of hipness. We wound up driving the coast to Encinal Canyon and sighed with relief to be out of the traffic and crowds. The hills had suffered burns from a 2018 inferno that swept in and burned half our mobile home park as well, including our former home. We took heart seeing green leaves sprouting from blackened tree trunks.

By 4:30, temperatures had dropped to the 70’s at our campsite. We enjoyed watching the Brown Towhees and Oregon Juncos peck for acorn scraps, which the campground’s numerous ground squirrels shredded by the hundreds. The ground squirrels dig holes big enough for a foot to sprain an ankle in, so we watched the ground when crossing the meadow.

We noticed a woman and photographer with another woman carrying a portable blow dryer to create a windblown look. Looks like quite a few folks come here for family and engagement photos. The scenery is so striking, the park considered ‘the Yosemite’ of Southern California.

The following morning we were greeted by a family of deer grazing in the meadow led by a handsome stag. It was 49° at 6:30 a.m. We walked on one of the park’s many trails, admiring the bird and animal life, grateful to be in a nature preserve.

We arranged to meet Bill’s brother Mike, along with dear friends later in the week at the nearby King Gillette Ranch, headquarters for the Santa Monica Mountains National Recreation Area, a division of the National Park Service. Located in the former estate of King Gillette, the razor baron, the white buildings with red tile roofs house a visitors’ center and picnic table under long-armed venerable oaks. A flock of parrots squawking in unison added to the atmosphere that we were somewhere special.

Picnicking Sunday with Mike and catching up on his life as a distribution manager for Nutro Pet Foods was good. We’ll see him again in six months when we travel to Arizona for his son Eric’s wedding.

Our friends Diane and Jeff met us the following Wednesday. The deli food from nearby Gelson’s—where we shopped daily and Bill swooned over the delicious muffins and rugalahs —was delicious as we caught up on family stories with each other. We’ve known Diane since I worked at NBC, Burbank, from 1976-1981. She married Jeff and we have stayed at their home and continued our endearing friendship.

Our friend Patty, whose 1973 party I met Bill at, met us Thursday. Fun and authentic and salty in speech, she impressed us with her recovery from near-death lymphoma and its treatment. We talked freely and openly and wholeheartedly. Golfing, family and friends, and travel weave her life these days. So good to be with peeps we love and have a long history with.

We also visited our friends Al and Janice Kane, who Bill’s known since he was a boy in Catholic school. Their Thousand Oaks home is an ohana for their son Alan and his wife Jessie, and their two children. Their daughter Natalie has four children who visit regularly. Janice is a nurse with a long career at Los Robles Hospital. She is the Madonna who holds the family together with love. I enjoyed the closeness of the generations and their high energy life. We love this family!

Our quiet nights at camp carry the sound of racing motorcycles and cars along nearby Malibu Canyon. A ranger said accidents are a regular occurrence as people race to their next destination. We hear the siren of an ambulance at least once, and usually twice a day. Hurry sickness is what we call it.

Meanwhile, we learned that the power was out on Whidbey. Our friend Mary Brennan, who is staying at our house to care for our cat and fish while we’re on the road, walked through firing up the generator with Bill, and the best practice for making a fire to keep her warm. Power was out two days and all was well. We read about flooding in Bellingham and Mt. Vernon with so much rain.

On Tuesday we drove to our old neighborhood, Seminole Springs Mobile Home Park, to meet with our friend Debi, whose home burned in the November 9, 2018 fire. She is awaiting its replacement. A number of neighbors have had new homes brought in. Our site, #104, remains empty. Our once beautiful lake was filled by eroding hills following a rainstorm that hit after the fire. Now the lake is a forest of willow. The once dammed Sierra Creek that formed the lake in the 1970’s runs free again.

The week went quickly and it was hard to leave the land and people we love. We left on a misty morning Friday, Nov. 19. A noble stag walked across the road in front of us as we left.

We are now camped at the funky  Franklin Hot Springs in Paso Robles. As I type this, I smell the sulphur scented hot springs. As soon as I get this story published, I’ll make a spaghetti dinner, then swim in the healing waters.