On the Road 4 – Mesa AZ to Orange County CA 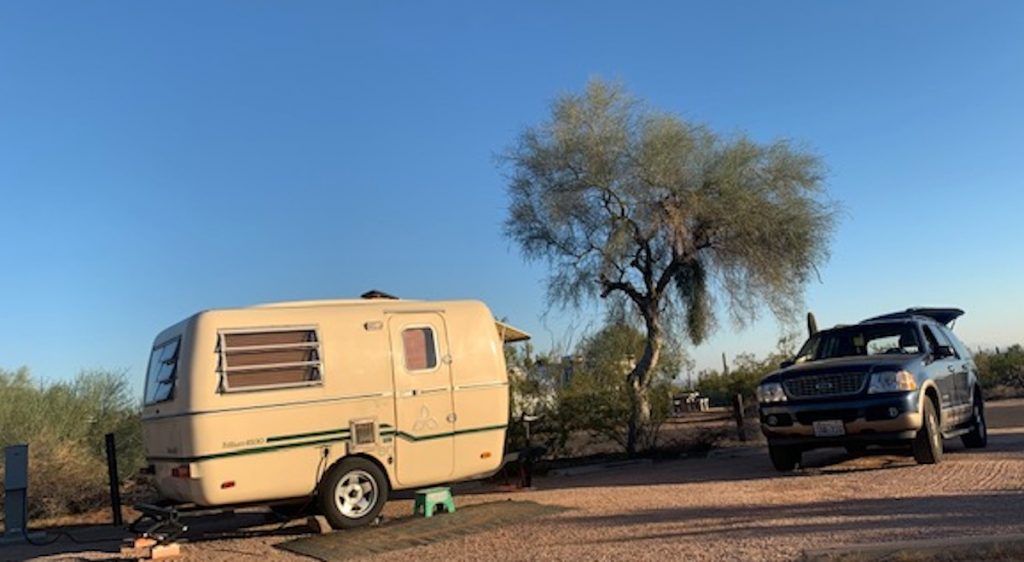 Marion the 1979 Trillium Trailer, and her faithful Bertie the Explorer, look for shade in the hot temperatures of Usery Park in Mesa, AZ

Bill and Kate Poss are on a two-month road trip from home to Oregon to Arizona to California before heading back to Langley in December. This is part 4 of the journey. So far, we have camped at Mt. Shasta; Gardnerville, NV; Crowley Lake, CA; Keough Hot Springs in Bishop, CA; Bullhead City, AZ, Dead Horse State Park in Cottonwood, AZ; Gilbert Ray Campground in Tucson. This trip covers Usery Park, in Mesa, AZ, to Orange County, CA camping.

Last time I wrote, Bertie the 2002 Ford Explorer was making strange sounds in her rear right tire. We were directed to an honest mechanic in Tucson, Griffith Automotive, owned by Mark Griffith. Turns out Marion our vintage trailer puts weight on Bertie when braking downhill, causing more heating than usual. We weren’t charged for the visit, or for the mechanic’s inspection.

We drove to Mesa, AZ to camp above the sprawling Phoenix suburb in Usery Park, a Maricopa County regional park that is sparkling clean, thanks to volunteers who take great pride in their work. We were glad to see magnificent saguaros growing around the park, thinking that we left them behind in Tucson. On the way there, we noticed signs for nearby new homes, ‘starting at $600,000.’

Our Buckthorn Family Campground Loop campsite #34 was fairly near the bathrooms with flush toilets and showers. We enjoyed splendid views of the lights of Mesa during the evening. Our spacious site was raked pink-tan gravel and provided much-needed shade from green-barked palo verde trees, which grew at its edges. We learned the trees’ bark photosynthesizes from the sun! In Spanish the name means green stick and it is the state’s tree.

My niece Renaya stopped by with her sons, Quinn 12, and Reid, 13 — great lads who have direction and interest in their lives. They live nearby in Mesa. With our Northwest sensibilities, we said it was too hot — at 91° — and Renaya laughed and said this is comfortable, compared to 110° during the summer. She told us about how pack rats cover their holes with cholla cactus balls. Jumping or chain fruit cholla grew in this campground. And our site had packrat holes whose entrance was lined with cholla balls. Hoping to get more shade, I affixed our beach umbrella in the soft dirt nearby a packrat front door, and one of the pods leaped onto my shoe. Bill used pliers to remove it.

Bill’s oldest brother John, a retired mortgage broker, and his wife Gail, a retired teacher, have lived in nearby Scottsdale the past 30 years. We ate lunch outside in the shade of their comfortable back yard. Old Scottsdale has impressive architecture, including the Scottsdale Civic Center, and its library building, which reflect a time when beauty and grace were important.

Beauty and grace were apparently absent a while until the election of the city’s current mayor, David Ortega, in 2020. An architect himself, David Ortego once apprenticed to Bennie Gonzales, designer of the award-winning Scottsdale Civic Center.

During the 12-year reign of Jim Lane, the city’s previous mayor, unbridled growth took place. Scottsdale became the playground of the über wealthy. Their private jets flew over John and Gail’s back yard in a steady stream while we visited. After lunch, John drove us into new Scottsdale, through the The Scottsdale Quarter, where traffic was thick and parking nearly nonexistent. We crawled by a restaurant where Maseratis and other luxury cars were parked in front of an impossible-to-get-a-reservation restaurant. I longed for the simple landscape of our campground at Usery Park.

Our dear former neighbors Matthew and Shirley Brencick, moved to Phoenix a few years ago, and stopped by early one morning to visit in the shade of Marion our trailer. Our visit had us covering topics from petroglyphs to politics to music to personal history. Good to reunite with these interesting and warm people.

We enjoyed a heartfelt gathering of families at the Riparian Preserve at Water Ranch in Gilbert, AZ. Here we gathered family from Bill’s side, my niece, my cousins and their children and grandchildren. Renaya’s boys organized a game of catch, which engaged six boys of various age for our entire visit. Our gathering brought folks together who never met and the flow among us was easy.

The next morning we said good-bye to our campsite whose night sky was highlighted by the Orion constellation, traveling east to west. We will see saguaros again when we return for a Phoenix wedding in six months.

We breakfasted in Quartzite, the West’s snowbird town, made even more popular by the film, Nomadland.

We stopped for breakfast at the homey Mountain Quail Cafe. Our waitress Helen said she moved from Pennsylvania five years ago to be near her sister and now lives here full-time. Direct and friendly was Helen, as were the other diners. We felt welcome here in this unpretentious atmosphere with good food. Locals make crafts, which are for sale. I bought a couple of cholla cactus night lights to give as gifts for our next two visits.

We drove west on I-10 toward Whitewater Preserve in Whitewater, California. It is one exit past the turnoff for Hwy. 62. Formerly a trout fishing destination, now more than 2,800 acres are protected by the Wildlands Conservancy, California’s largest non-profit nature preserve system. Its motto is ‘Behold the Beauty,” with an intent to foster an appreciation of natural beauty in people’s lives. Free to the public, park management’s approach is to make their wild lands accessible to everyone. That includes the occasional graffiti bandit, who sprays tags on river rocks and bathroom doors, which the park’s staff remove.

With an additional 3,000 acres purchased and donated to the Bureau of Land Managment, the canyon is protected and contains a portion of the Mexico to Canada Pacific Crest Trail.

The narrow granite canyon of varying colors and balancing boulders, plentiful birdlife, and occasional glimpses of noble big horn sheep were a balm to our senses. We were lucky to see a lone big horn ram perched high on a peak at sunset looking out at our canyon below. We watched him through our binoculars and he looked like a true lord surveying his lands. The Wildlands Conservancy promotes hiking, birding, and respect for the land. Hunting, off-road vehicles, drones, and fires are prohibited.

Bill had driven for seven hours and would have liked nothing more than to relax and enjoy the scenery. However, we wished to visit our friend Renee, who was recovering from a near-death experience following a simple surgery. We drove back out toward I-10, picked up some Mexican fare for dinner, and headed to Yucca Valley where Renee has lived in a friendly mobile home park the past 10 years.

As a retired designer, Renee’s home reflects her love of antiquities, angels, crystals and fine fabric. She related her story about negligent care and how she survived. Wow! We visited until it was time to go. A waxing moon and star greeted us outside her front door.

I insisted on driving back to camp since Bill had driven all day. I must tell you, he likes to be the driver and is a nervous passenger at the best of times. It was dark, Hwy 62 on our way home was uphill and curvy. I attempted to pass a gas truck lumbering up the steep grade. I passed him at the crest and on the downhill grade, he decided to play with me and kept even with our car, whether I sped up or slowed down. This behavior raised Bill’s anxiety and we continued like this until the driver grew bored and sped off.

We made it back to our canyon in one piece. With no electric hookups here, the only light came from the stone-sided restroom, our solar lanterns, and the headlamps of the conservation students camped nearby. Not wanting to go to sleep in this state of mind, we opened Bertie’s tailgate and sat on her bumper, looking out at the Milky Way, unpacking the feelings to decompress.

The following morning we drove to Desert Hot Springs to get the car washed, shop for groceries and swim at Miracle Hot Springs Resort. Felt great to be swimming laps in the 90° mineral water and observe the visitors: a couple who were glued front to front, arms intertwined as they walked across and around the pool; a loud laughing redone woman flirting with a man who bought her gin and tonics; and a lonely dad with two children and a dying wife who held me in monologue for half an hour or so; and a talkative chubby Hungarian grandmother in a hot pink bathing suit. We paid the daily senior rate of $13 each. We were refreshed. That night we listened to favorite music: the Moody Blues and Krishna Das.

Our preserve manager Lucas Wilgers, impressed us with his calm and direct demeanor. He let us know about the big horn sheep that visited the valley the afternoon we arrived, and about an Audubon birding group that would meet on the morning. He told us his birthday was Nov. 9 and that he was 29. What a pleasure to meet him and stay in a place he stewards with ease and grace.

After two relaxing nights camping here, we headed west on I-10 to Hwy. 79, heading to Hemet and Sage Road, where we stayed with my niece Janelle, her husband Kevin and their daughter Lauren, 11. What a pleasure being in their company. Lauren introduced me to the family’s roosters and hens. They live in a desert canyon with boulders and ranches and hills. They look out for visiting rattlesnakes and coyotes. We talked and visited and shared in the bonhomie of good family connection. We looked at old photos, recalling all the times we have known and people we love. After hiking across the road on land that was sold back to the indigenous Pechanga Band of Luiseño Indians, we drove through Temecula to Oceanside, before heading inland on the Ortega Hwy to Ron Caspers Regional Park. We had been told the park’s wells just went dry and thought we could camp there anyway. However the porta-potties were nearly full and our neighbors unskilled at making campfire, which smoked in our direction.

We drove to Bill’s brother Larry Poss and his wife Candyce’s home in the gated community of Cota de Caza. Their grown sons David, and Jeff and his fiancé Kim joined us for Mexican fare as the house poodles, Mia, the wise alpha woman dog, and Don Diego the young puppy, asked to be petted and Don Diego asked for attention.

Roads in Orange County are wide, clean, and full of tracts of beige and cream houses with tile roofs. Shiny cars drive fast. For my wild nature, the perfection of it all is comfortably numbing.

This morning, Veteran’s Day, we left camp and after an hour fruitlessly searching for other campsites, we found a great site at nearby O’Neill Regional Park, a sister park, which honored our reservation, $15 a night to camp with water. Site 15 is a shady pull-through across from the restroom/shower.

I am currently at Starbucks in Rancho Margarita, escaping the 93° temperatures outside. Our next leg of the journey will take us to Malibu Creek State Park in Agoura, just minutes from where we used to live at Seminole Springs Mobile Home Park on Mulholland Hwy. Half of it, including our home, burned in the Nov. 9, 2018 fire.