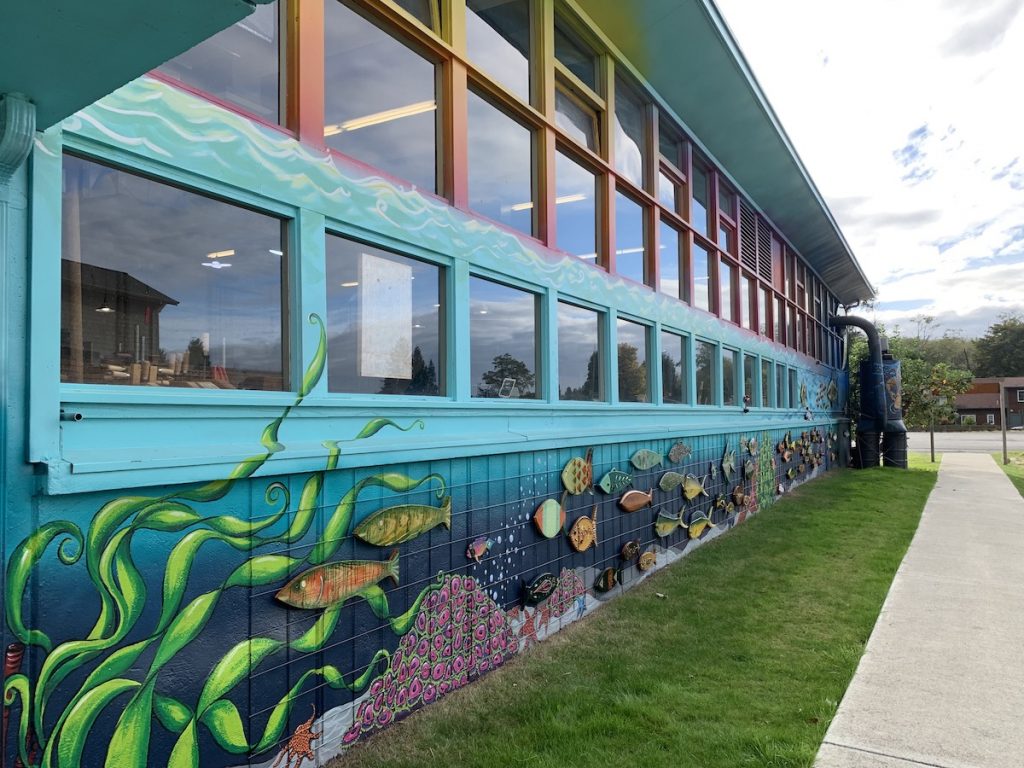 Note: all photos by Kate Poss, except for Scott Chaplin and Tony L. Gill.

Tune in to the League of Women Voters this Thursday, Oct. 7, and virtually attend the candidates’ forum for Langley City Council, South Whidbey School District Board, and Fire/EMS Commissioner. Register for the Zoom event on Wednesday Oct. 6.

Mayor Scott had originally filed to run for city council last May, seeking election for outgoing councilman Peter Morton’s position 5. His name is still listed on the November ballot, but he is not a candidate.

Scott’s experience as a city councilman in Carbondale, Colorado, along with his vision in building community, and lifelong commitment to public service, gave him a solid history in leadership, and he was appointed by the city council last June.

“The organization I founded was called the “Sustainability Center of the Rockies” (SCoR); and it eventually merged with an affordable housing effort and also to the transformation of an elementary school into the Third Street Center, an energy efficient, solar powered community center with space for numerous local organizations,” Scott wrote in a June 25 email. Visit Third Street Center to learn more about this “Social Impact Incubator Powered by Community and Sunshine.”

With Scott’s appointment as mayor, and the window for filing closed, Gail Fleming, a long-time actor, playwright, activist, and chair of Langley’s Parks and Open Space Commission, is a write-in candidate for Position 5. Her opponent is Tony Gill, father of councilman Thomas Gill, who currently serves on position 3. Thomas Gill had tried a run for the mayoral appointment last June, but lost the bid to Scott Chaplin.

According to her campaign brochure, Gail Fleming has lived in Langley since 1980, and was a founding member of the Langley Critical Area Alliance, which works to protect Langley’s wetlands and bluffs. She is committed to “listening, making sure all voices are heard, and encouraging community involvement.”  Serving on the PAB and POS has given me experience in how the city is run – working with staff, the council and the public. Those who serve on the boards and commissions bring a lot of energy, expertise and research to their volunteer work. But all they can do is make recommendations to the council. I would like to put my public service to the best possible use by being in a position to make the actual decisions which affect the future of our community.”

Gail said she has seen the energy and research get lost in the past with important recommendations not being approved by the city council. Following Scott Chaplin’s appointment as mayor, Gail was asked to run against Tony Gill as a write in candidate. “I was already involved with the city, I thought, I want to do some good. Near and dear to my heart is environmental protection. In my Edgecliff neighborhood, we’re trying to protect the bluffs and wetlands. There’s climate change. There is development of interconnecting trails in and around Langley that needs tending and nurturing. Also important is listening. I’m not into polarization. I have honed my communication skills as a group facilitator. When all voices are heard, we will hopefully not get hardened into our separate boxes.”

Gail Fleming can be contacted at this email address.

Running unopposed for Position 2 is Rhonda Salerno, seeking the post for outgoing council woman Dominique Emerson. As chair of the city’s Planning Advisory Board, and newly appointed member of the ad hoc Climate Crisis Action Committee, Rhonda is interested in providing affordable housing to the community. She recently hosted two popular community meetings inviting experts — the first, outlying our challenges, and the second hosting experts speak on affordable housing tools and strategies, which can be viewed here.

Rhonda has lived in Langley for more than 20 years, and has worked with the city’s various committees since 2007. Her professional experience includes 40+ years as a teacher/administrator, including work as a curriculum specialist/grants coordinator for the State of Alaska Department of Education.

On her website, Rhonda supports creating new models of approaching challenges we face today: “In the words of Buckminster Fuller, ‘You never change things by fighting the existing reality. To change something, [we need to]build a new model that makes the existing model obsolete.’ I hope you will join me in continuing to lead Langley into an environmentally sound, affordable and racially equitable community. It really does take a village (by the sea)!”  She is committed to running a zero waste and cost campaign. That includes recycling previous election yard signs with hers, Gail’s, and Harolynne’s names affixed and having an online presence instead of paper handouts.

“Our island is fragile,” Rhonda said. “We have a top notch group working to protect our city. Scott’s on the affordable housing committee with me. We work with Rose Hughes of Goosefoot, Greg Easton, and Brigid Reynolds, (former City of Langley planner). We learn from each other. We have a chance to be a model city. We’re getting close to putting good ordinances  to work that improve our lives.”

Harolynne Bobis is running for Position 1, the seat now occupied by outgoing city council woman Christy Korrow. The sole woman of color running for city council, Harolynne serves on the city’s Dismantling Systemic Racism Advisory Group, formed in the wake of George Floyd’s murder and community outcry last year. “When I decided to run, I learned there are only five permanent African American residents living in Langley,” she said. “I read that a city council is the one organization that impacts a community directly.” She seeks solutions in creating affordable housing and creating a livable wage. How to help the homeless.

With 40 years’ experience as an administrative/executive assistant in public service and non-profits, Harolyne has worked with Hedgebrook, the Bullitt Foundation, the Overseas Vote Foundation, and the European Consulting Network. She currently works for the City of Seattle as an Administrative Specialist III for its Department of Neighborhoods  “whose North Star is language access. In a city the size of Seattle, this is necessary. One of the divisions I work with Outreach Coordinators and others whose goal is to to ensure that all voices are heard and all citizens have the opportunity to impact their city. This is what i hope to bring to City Council, should I be elected.”

Moving with her husband Michael to Langley nine years ago from Amaliada, Greece, Harolynne says that Langley is “at an inflection point. The community is becoming more diverse and sees the need to be more inclusive with activities like passing a Sanctuary City Resolution and establishing the Dismantling Systemic Racism Advisory Group. As an African American woman, I feel I have a unique lived experience.”

Harolynne can be contacted by email at this address.

During a group interview with fellow candidates Rhonda Salerno and Gail Fleming, Harolynne said, “We have unity and shared values, which does not translate into lock step agreement in all issues that come up in the future.”

Kay Kenneweg is also running for Position 1. The eyes and ears of Langley, Kay is a regular visitor to the Langley Library and can be seen walking the streets of our Village by the Sea, talking with citizens, picking up trash, promoting the city’s best touchstones, such as the new vibrant wall of art at the South Whidbey Community Center, facilitated by Joe and Mary Lou Whisenand of the Living Design Foundation. Her hand-held election cards note a favorite metaphor: “Coming together and going forward.” Another favorite quote is by a woman she admires, Käthe Kollwitz, a German artist, born in Prague: ‘I am in the world to change the world.’ “We’re so fortunate to have so many women mentors in this world.,” Kay said in a later phone call.

Wearing a denim jacket whose back reads “Kay for City Council,” she is Kathleen Ivy Kenneweg, her middle name taken from her grandmother Ivy. Originally from Ohio, Kay worked and traveled as a barista/ski bum in Utah and South Lake Tahoe, among other jobs. She worked as a classroom nurse and educator for the Port Townsend school District 15 years ago. Working for a number of environmental groups, she has a degree in special education and social work. Her 30 years’ experience working with the ‘differently abled’ gave her a sense of compassion and an ability to navigate working within various bureaucracies and political settings. “People ask me, ‘What’s your experience?’” she said, giving an interview while walking around Langley. “Gosh, I’ve worked in hospitals, in schools, for environmental groups. I get points for that! I really care about the community and thought I’d give running for city council a try. I know the community and let people know what’s going on. I’m about quality control. I remain curious about making things better.”

On page 22 of the Voters Pamphlet, Kay notes: “Langley is a beautiful and laid back town and should retain its sweet nature while addressing items such as multi-cultural sensitivity awareness, mental health, and suicide awareness that will enhance the health and safety of its citizens. It is important to have communication between small business and the Chamber of Commerce and continue to strengthen that communication so that businesses are supported and thrive in an era of environmental changes and the impact they will have on the town.”

Tony Gill filed to run for position 5 for the Langley City Council last May. We spoke in a phone call on Oct 5. While the Voters’ Pamphlet does not list his elected, professional, and education experience, Tony filled in the details:

“Professionally, I am a well-traveled retired Navy aviator. I earned a bachelor’s degree in business, master’s certificate in project management. I have pilot and air crew training and experience. I was a small business owner in Oak Harbor, specializing in aviation training, including a computerized testing center. I tested pilots, air crew, ferry crew for their radio operator’s license. I had clients from Canada to Seattle.”

His statement in the Voters’ Pamphlet: “Langley is growing and changing. Change is part of the ordinary course of life and something we should embrace. I am not a career politician, let’s get to the point on why I ask for your vote.”

Tony Gill supports improving the city’s sewer and stormwater systems, as well as “transportation and zoning.’”He writes about business “being the lifeblood of our city. I support the growth of commerce in our city core and surrounding neighborhoods across retail, service, manufacturing, and hospitality.”

A longtime resident of Langley, Tony added: ‘Thirty years ago I attended my first city council meeting in Langley. We were talking back then about the same problems as now: sewers and housing.”

Meanwhile, his website is having some technical issues, which he is getting repaired. His email address is here.

For more information on other League of Women Voters virtual candidate forums in Central and North Whidbey, visit this website.