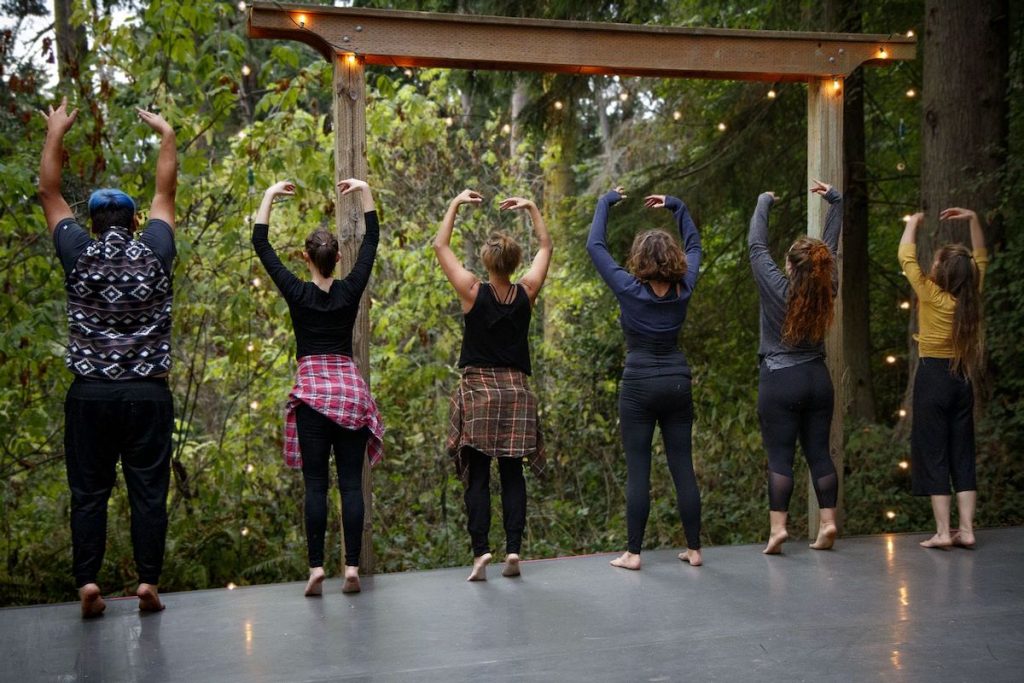 Alice Merton’s song No Roots, performed by the dancers, “is inspired by the adventurous women I have met throughout my life,” Beck wrote in the production notes of “Into the Woods,” performed at South Whidbey State Park last weekend. “The ones who laugh, live big, and make lemons into lemonade. To Genevieve Locksley and Sietske Courteau.”

Genevieve Locksley, a former Peace Corps volunteer who taught theater in the Philippines and now lives in D.C. as a theatre-maker, creates performances with themes such as finding one’s lost voice and cultivating hope over fear.

Sietske Courteau Veenman is – ‘My friend from the Netherlands. Her passion is teaching and environmental conservation and she lives on Whidbey,’ —is a young mother, like Beck Diamond is, and posts  about classes at Farm Girl Fitness with Beck on her Facebook page.

As a mother of a nine-year-old son and three-year-old daughter, Beck Diamond has started at least two modes of creative expression for young mothers like herself. Beck teaches yoga at Farm Girl Fitness on French Road in Clinton. She created a dance troupe last June to rekindle hers and others’ creative qi, or life force energy.

Getting a little taste of the energy at a recent Tilth Farmer’s Market, Meander popped up as a flash mob performance to Alice Merton’s No Roots. Just seeing the way the dancers moved gave me a frisson of thrill, remembering the joy I feel inside that only needs to be tapped.

Fast forward to Labor Day weekend at the South Whidbey State Park outdoor amphitheater. Meander held three performances. My husband Bill and I, and This is Whidbey’s photographer David Welton sat on the benches in the cool early evening. The sun shone yellow through gray clouds amid evergreens and maples backlighting the dancers.

“Our youngest dancer Hunter did a performance embracing  body positivity,” Beck added. “He never had any technical training. He is a natural mover. Most people have it inside.”

Hunter Fox, with raspberry pink and blue hair, is a young man who choreographed and danced to Heartbreak Anthem, by Galantis, David Guetta, and Little Mix. In the program he writes: “This piece is about having your heart broken into a million pieces and then spreading your wings and seeing yourself free.” He performed a wowsa set of splits he had perfected only a few days earlier. His focus and courage and emerging talent fueled the audience, who broke into whoops and cheers and spontaneous applause following his performance.

Beck choreographed My Mother Told Me, by L.B. One, Datamotion & Perly I Lotry, for her son Owen Diamond, and his friends Sam Courteau and Trevor Hoshiko. The boys had the moves down, dancing to a popular hiphop Irish shanty tune.

Dancer Jessica Day choreographed and danced to Home and Somewhere Else, by Mimicking Birds. Early in life she wanted to be a ballerina, but life took a different path. “This piece I bring to you today is a physical representation of my internal journey of dance in my life,” she wrote about her piece. “Along the way I had to challenge my insecurities, open up my heart, and dance with unhindered vulnerability and fervor.”

Juliana Brielle, a world traveler returned to Whidbey, composed a routine of fluidity with dancer Kelsey Lampe. The women flowed over and carried one another to the tune of We Move Lightly, by Dustin O’Halloran. Apart and together, the effect was focused and spellbinding. They write: “Two journeys. Two chapters coinciding through difficult lessons codependency, partnership, toxicity, and love. This is a discovering of truth, inner light, and your own contribution to the world during a conflicting time within yourself; expressed in movement. The path that can be related when things don’t fit between two people, yet still honoring the ability to let go, so life may flow and they both may grow.”

And No Roots when performed this night drew knowing recognition of the women’s power as performers as Juliana Brielle, Anna Cosper, Kelsey Lampe, and Beck Diamond moved across the stage. Beck’s choreography felt as natural and freeing as the woods that surrounded us. The crowd drank it up and gave it back in hoots and cheers and applause.

What is it that makes the audience feel good in their body while watching the performers?

Dancer Anna Cosper said she turns her brain off when dancing.

Beck commented about this question in a recent note, “This may be another conversation for us, lol, but Susan Foster, dance maker and scholar calls it kinesthetic empathy.

“We’re not elitist; what we do is a practice and a process,” Beck added. “Many of us are returning after years away from performance. After motherhood, women get pushed out of dance. This is the space where we are allowed to flow.”

Beck Diamond is interested in the many ways in which we express ourselves, be it yoga or dance. “I’ve taught on and off over the years,” she said. “I like creating shows and choreography. I lie up at night creating dance. This is my passion. It’s been a long time coming.”

Getting kicked out of middle school, launched her dive into creative expression. Her mother enrolled her in a performing arts school in which she thrived. She went to school at UW, where she earned a Masters in Cultural Studies, got married along the way, and had a pair of children. She is the newly appointed executive director of Civility First and her soul shines out in her public work, especially in choreography, one of her true elements.

“Luckily I made my way back,” she said. “I didn’t think I could dance again.”

At the end, after flowers and applause, Beck said she will hold auditions for next year.  In the mean time, her group meets once a week upstairs at Bayview Corner. “If you want to dance you can dance,” she said. Plans are in the wings for more performances at local venues, and perhaps a Thriller performance on Halloween.