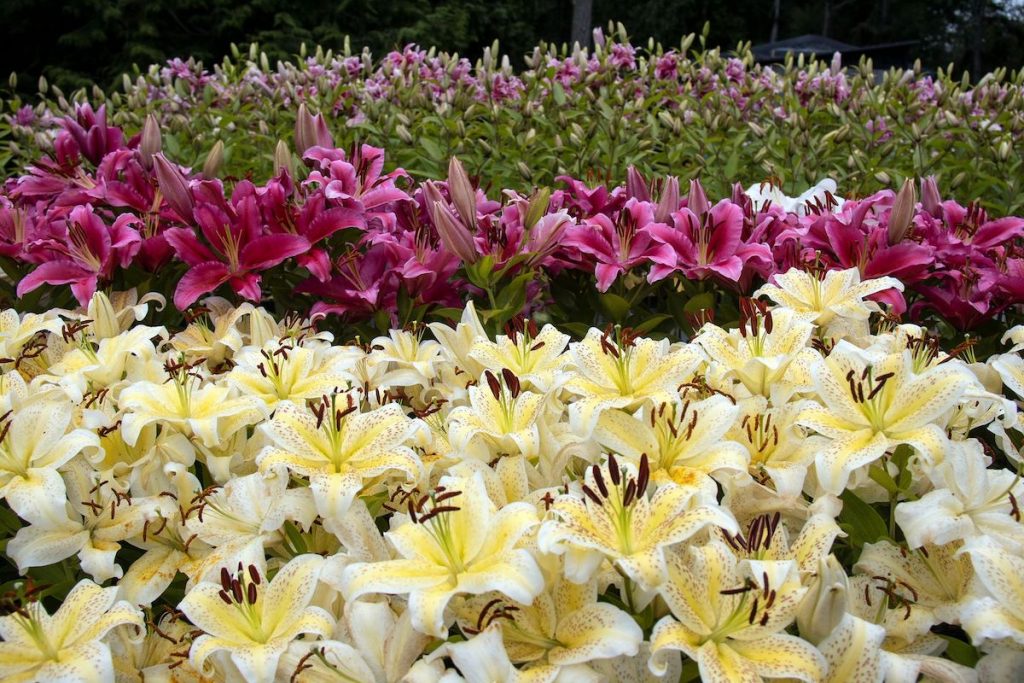 Dazzling to the senses, these lilies flourish at Moonstruck Gardens in Clinton, which is open Fridays-Sundays through the end of September

Like the folks who move to Whidbey Island to cultivate their passion, Melinda Creed is living the dream. Melinda’s idea of a good life is celebrating her daughter and new grandson, while curating speciality varieties of hostas and lilies at Moonstruck Gardens in Clinton.

This is Whidbey’s David Welton visited the garden a couple of weeks ago with his wife Georgia Edwards. Georgia told students in her K9 Nosework®  class about the place, and they bought plants and took home a bit of the magic that grows in this Cultus Bay Road location. Melinda noted that much of her island business comes by word of mouth, and “people come by more than once.”

Georgia and David were taken by the beauty and scent of the lilies, the vibrant hostas, and by Melinda’s colorful personality. Even their dog Hawkeye, a Bouvier des Flandres breed who was riding along with the couple, was seen sniffing the lily-scented air appreciatively. They planned to visit again.

David emailed with the message, “This place smells wonderful!” and we met at Moonstruck Gardens last Friday to write this story.

The moment I arrived, I met a Melinda who was over the moon, showing me photos of her handsome newborn grandson — Maximillian Bennett — who arrived three weeks ago to her daughter Samantha, who is a co-grower with her mom. The scent of lilies perfume the air. Black hoop houses host rows of hostas. There is a sense of order, balance and calm, framed by the tall evergreens surrounding the property.

Melinda had hoops of her own to go through three years ago. Purchasing the previously logged property in 2018, Melinda, a clinical social worker from Bellingham, learned she had to navigate a labyrinth of forestry law and practices, which delayed her plans a while. The former owner did not know his logged property held building restrictions. Following her ordeal, Melinda says future property sales ought to reflect in the title restrictions associated with logging.

Meanwhile, Melinda persevered in untangling the threads of compliance regarding her land. She drove from Bellingham to Whidbey five days a week after work, getting the property prepared, and finally moved into her new home last September.

She hasn’t even unpacked her house goods yet. Her plant care takes priority. And so do Thursday visits to Bellingham to visit Maximillian and Samantha. Six days a week Melinda is outside with her dog Honey, a Vizsla breed who “— goes with me to deliver flowers and likes to kiss—“ from 6 a.m. until it’s dark, planting, picking slugs, watering, weeding, greeting customers from Fridays to Sundays through September. Starting in October she prepares for winter and the incoming shipment of lily bulbs for the following year. “I like to get my bulbs planted before my birthday, which is March 12,” she said.

Hostas are arranged alphabetically in ten hoop houses Melinda paid a friend to build. She hand waters all the plants and her care reflects in the palpable life force of these ‘queen of the shade-loving plants’ commonly known as Plantain Lily.

Hostas’ ancestors originated from China, Korea, and Japan, and were introduced to Europe and America in the 1800s. Melinda purchases the plants grown as plugs, from wholesalers and speciality growers. She unpacks and plants them in a special soil mix, labels the containers in silver ink, and cares for them while they mature. It takes about a year before the plants are large enough to sell. As of this writing, 206 varieties of hostas —about 20,000 plants — are tended to at Moonstruck Gardens. One of her top ten favorites is a variety called Whirlwind, whose dark green pointed leaves are marked by a cream-colored, flame-shaped center. A variety called Blue Mouse Ears peaked my imagination, leading to fond recollections of similar wild hosta varieties seen growing in forests we visited.

Melinda’s voice is flavored with a hint of North Carolina, where she moved from in 1969. Her eyes are clear and her skin smooth while she jokes, shares what she knows –such as using peppermint spray to thwart rodents in car engines — and gives lessons on plant care — as we walk around Moonstruck Gardens. A slight breeze ruffles her fine hair as David takes photos of her sniffing her lilies.

And there are 9,000 lilies to grow and care for. They arrive as bulbs wrapped in peat moss from the Netherlands shipped to Midwest wholesalers. Some bulbs are grown as plants; others are sold as cut flowers in her outdoor stand.

Neighbor Sandy Menashe popped in to buy a bunch of the scented flowers to greet a guest who was coming by soon.

“This woman is outrageous!” Sandy said good naturedly of Melinda, as she rushed away to meet her guest.

Melinda pointed out her Roselilies —so-called because of their multi-layered petals that result in flowers looking a bit like roses. One is named Isabella, lovely in shades of pink and maroon. A favorite is Samantha, an oriental Roselily. variety, noted for its dramatic deep red-pink flowers lined in white margins — the same name as her daughter, a teacher, and co-grower with Melinda, and the new mother of Maximillian. Another appealing variety is Zelmira, an Oriental Trumpet Lily, in shades of pink with an apricot colored overlay and chartreuse throat.

The selling season is winding down and Melinda is getting ready for next year. She started printing gift certificates, after a husband stopped by and asked for one, knowing his wife loved the place. While Melinda and I were visiting, his wife came by to shop, mentioning that she had been given a gift certificate for her birthday.

“I’m here to buy lilies,” the woman said. Later Melinda and I noted the synchronicity of talking about the woman’s husband, which began the printing of gift certificates, and the arrival of his wife at that point in the conversation.

Meanwhile, check out this website for hours and directions, and learn more about Moonstruck Gardens, located at 6545 Cultus Bay Road. The $7 lily sale extends through this weekend.