An afternoon walk with Chuck Pettis 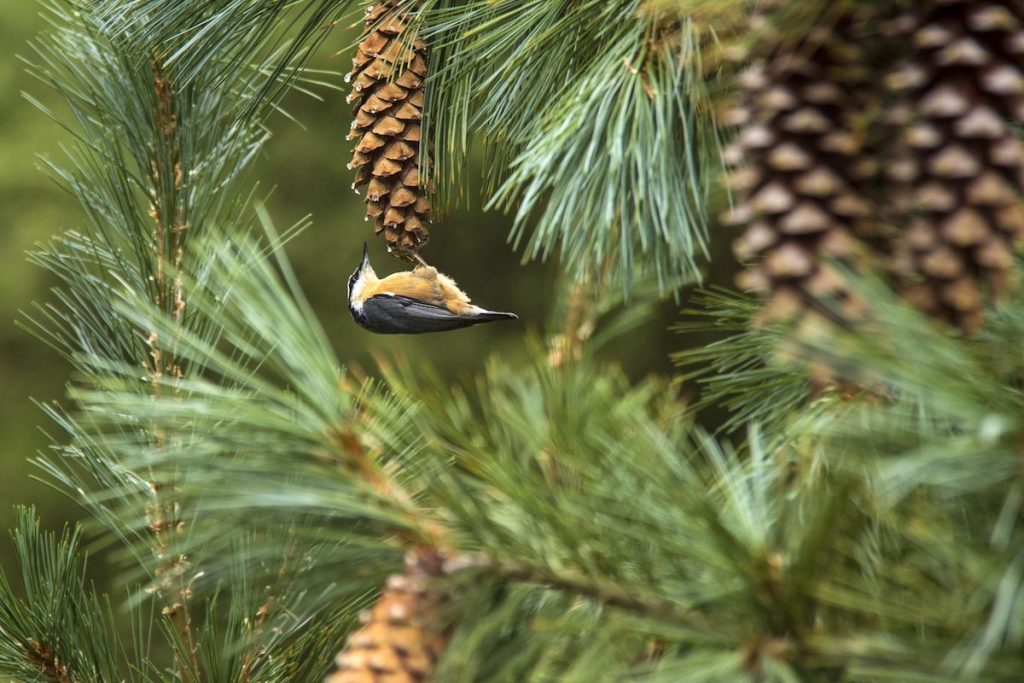 A Red-breasted Nuthatch is one of nearly 100 bird species observed at the Earth Sanctuary. Visit the nature reserve's website to download a bird checklist.

As we strolled with Chuck Pettis at his Earth Sanctuary last week, Van Morrison’s song Into the Mystic came to mind. Here in this Freeland oasis, the natural world is celebrated and sculptures honoring the Earth’s energies share space with flora and fauna.

I joined our photographer David Welton while he and Chuck Pettis walked around a Tibetan Buddhist stupa, which contains a figure representing guardian goddess Ushnishavijaya. She is one of three deities one mediates with to promote longevity for oneself and all sentient beings. Chuck explained that circumambulating the stupa in a clockwise direction for half an hour or so extends our lifespan. David asked if the meditation would improve his atrial fibrillation. Chuck told him the best results are gained by walking while contemplating compassion for others.

Leaving the stupa, we entered a nearby path heading toward the fens. Chuck used clippers to snip away trailing blackberry canes and little overhanging branches. We walked by redwood and sequoia trees, planted to endure for 500 years and more.

We arrived at a clearing to view a new, race car red sculpture. Four, 12-foot-long aluminum tubes intersect without touching. They hang suspended in a framework of wires and hooks. At first glance I wondered what does this mean? I learned how to better view the piece after hearing Chuck describe his design process.

He meditates often at Earth Sanctuary and says the deities grant clarity on where and what to create. In this instance, Chuck was given inspiration to design the Compressed Cube Tensegrity Sculpture. According to its website description, it is “the culmination of Chuck Pettis’ musings on Kenneth Snelson’s tensegrity artworks and his early studies with with Buckminster Fuller.”

Kenneth Snelson was an American contemporary sculptor known for his pieces whose components represented the principle of tensegrity or floating compression. His mentor and professor, Buckminster Fuller, was a renowned visionary and inventor, who dedicated his life to making the world better for humanity. Buckminster Fuller invented the word tensegrity to describe Snelson’s principles of design using tension and compression.

Chuck Pettis has dedicated his life to making a better world and his intentions resonate throughout the Earth Sanctuary and its man-made art forms.

Earning a master’s degree in design from Buckminster Fuller’s design school in Southern Illinois during the 1960’s, Chuck Pettis first learned about the principles of tensegrity.

With regard to the recent piece, Chuck added, “The pipes are not touching; they are a compressed cube, I went to Tim (Leonard of Heavy Metal Works) and he said, ‘I can do that.’ This is a juxtaposition of opposites. Compression and expansion.”

Chuck next pointed out a nearby line of burnished driftwood logs. “They are installed on ley lines,” he said. “What makes the Earth Sanctuary special is its ley line energies. All sacred places have them.”

Earth Sanctuary’s webpage and accompanying meditation video describe the driftwood sculpture as: “…a curation of charred driftwood arranged to mark earth energies, which are known to inspire a spiritual experience.”

Chuck directed me to stand between two of the logs on a rise along the 56-foot-long row. “Close your eyes and feel your sensations,” he said, adding, “When I installed this last fall, a Barred Owl came down and landed and perched in a nearby tree for an hour.”

Back to the sensations, with eyes closed, I smelled the fresh forest air and felt a pleasing sensation in my belly. Next Chuck said to stand on a patch of earth at the bottom of the rise encircled by driftwood logs. With eyes closed again, I sensed a pleasing buzz all around my body, reminiscent of the vibration I experienced in a friend’s bee sanctuary in Clearlake, CA, where she tended several hives.

Next David stood at the power spot, closed his eyes, and said. “It feels like heaven. I hear birds chirping…”

As we continued our visit with Chuck, we talked about how the Earth Sanctuary has evolved to include memorial sculptures and, in the past few years, trees to commemorate a loved one.

Heading toward the fens, we stopped at a clearing containing an artful lidded ceramic jar. The Axis of Hope Prayer Wheel, by Bellingham artist Chris Moench, is designed to hold prayers and spin, sending intentions out into the universe. The mainly blue, three-foot-tall jar adorned with a scene of diverse people holding hands and dancing beneath mountains and flying birds, is a touchstone for my husband Bill and me when we visit and seek guidance.

Click here, to view the piece in action, seen on the left side of the second row. Following the Earth Sanctuary installation, others contacted Chuck about adding memorials for their loved ones. As the requests grew, Chuck’s meditations inspired him to create a memorial tree program. Families can purchase new or existing trees with a commemorative marker and scatter a loved one’s ashes at the Earth Sanctuary.

We wound our way through fir, alders, cedar, white pine, mingled with the smell of ripening blackberries. Chuck talked about the resident beavers and their appetite for gnawing on alders, with a preference for cedar. An elder alder showed the effects of beaver girdling, where the bark is stripped and inner wood chewed. Eventually the tree is reduced to a literal point where it falls over. Cedars nearby the fen bear three-foot-high fencing to deter the beavers.

“We planted 15,000 native plants and 3,250 trees since I bought the Earth Sanctuary,” Chuck added. “We have learned a lot about what will grow well and what will not.” On its website, some of trees that do well include: Western Red Cedar, Douglas Fir, Western Hemlock, Black Cottonwood, Sitka Spruce, Shore Pine and Big Leaf Maple.

We continued to the Fen Pond Stone Circle, with Chuck saying, “I meditate in cooperation with the Hierarchy of Spiritual Beings. They are entertained!”

Inside the stone circle of llenroc stone, brought from Ithaca, New York, Chuck added, “I do a blessing meditation here, bringing up the feeling of love—a love bucket. Most people’s love buckets are not filled up. Like the Beatles’ All you need is love.”

We stood in the circle and closed our eyes for a minute, bringing an image of love and who might benefit from that feeling.

A woman who stayed at the Earth Sanctuary’s retreat house recently, posted these words: “I’m so glad I came here for 4 days. Every step I took on the path was to a sacred site – from the first step to the ones I will be taking as I continue on my journey.”

Our Into the Mystic tour had come to an end. When we visit there this winter, we will listen for the fog horns, just like Van Morrison sings about, as we stand on the high point near the Gray Whale Medicine Wheel within the nature compound where we can see the Sound.

Visitors are asked to pay a $7 per person fee, or purchase a yearly pass for $35 per person. The funds go toward maintaining the property for now and into the future. For more information, visit this site.