Now is the hour 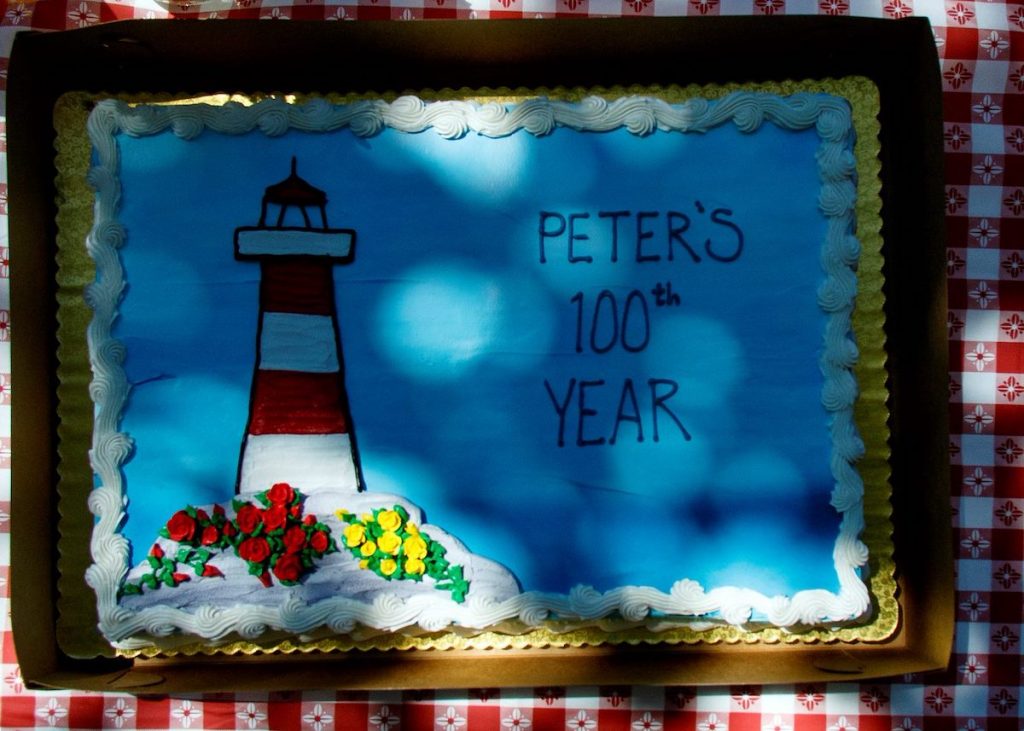 Dreaming of lighthouses and ships these days, our Peter Lawlor's family and friends celebrate his long and full life

Langley’s Poet Laureate Peter Lawlor celebrated his 100th year a wee bit early and is getting ready for a voyage to the Great Beyond.

Guests gathered outside July 25th at the salty musician’s home in the Brookhaven community of Langley. A warm summer day with the sound of leaves in the breeze and doves singing framed the bittersweet gathering. A day to say good-bye and celebrate a father, grandfather, neighbor, and friend.

Emcee/musician/poet/artist Beverly Graham welcomed family and friends. “Peter is a lover of life,” she said. “Audacious. He marched gleefully through life.”

Peter’s daughter, artist Gretchen Lawlor, skilled at holding deeply-felt rituals, said her dad will soon be an ancestor. “My wild father is a handful and I needed all of you!” she said. “I called Beverly and she said yes (to emceeing the party) before I could tell her what I wanted…So many of you have indulged my father. I should have an open mic for all the women who loved my father.

“He can hear us,” Gretchen added, gesturing to the open windows of Peter’s casita, where he rested on a raised bed. “We Lawlors do anything for applause. He is in the final stages of this journey. We figured a popup party would cheer him.”

Peter Lawlor, a regular performer at Mukilteo Coffee Company for 16 years, was like a dad to owner Gary Smith. Gary stopped by Sunday to say adios to his other dad. He had tears on his cheeks, remembering the friendship he’s enjoyed over the years.

A merchant mariner, a ski instructor, a traveling man, a musician and poet, a lover of ladies and the sea, Peter Lawlor was born Nov. 26, 1921 in New Zealand. He had three children and has four grandchildren. His daughter Gretchen lives on Whidbey. Peter moved to the island in 2000 following the death of his wife Valentine.

In a nod to Peter’s mariner life that took him sailing away, Dianne MoonDancer sang, I’m a Travelin’ Man, written by Ricky Nelson.

Throughout the bittersweet afternoon, visitors walked through the front door to share a last moment with Peter. Gretchen made a King Neptune’s crown for her papa. Gretchen’s son Aubrey in Los Angeles, and daughter Morgana, in Vancouver BC, have been in touch virtually for their grandad’s last days. Gretchen’s brother Ian Lawlor and his wife Mary, sister Deb’s daughters Katie and Jessie, arrived from afar to say happy trails. Peter’s girlfriend of 20 years, Roberta Brown, played a tune on her grand piano, while Peter listened and watched from his open laptop. Roberta lives in Honolulu now and visited Peter in June.

“Dad has been dreaming of ships and lighthouses,” Gretchen added as the gathering wound down. “Last night I dreamed of (her late) my sister (Deb), who said, “I’ve got it, Gretch!”

Bagpiper Don closed the party by playing his pipes, walking away up the hill under the trees.

Last August when we ran a story about his 99th year, Peter Lawlor sang a New Zealand ballad, Now is the Hour. It seems a fitting tune for Peter in his 100th year.

“I have such memories of this song being sung from the dock as we tearfully stood waving to someone leaving New Zealand — I’ll show you some photos some day — of me and Deb (Gretchen’s sister) wearing little white gloves, waving and looking stricken,” Gretchen Lawlor said in that story. “It was a big thing then, the world seemed so far away.”