Functional art that goes on tour 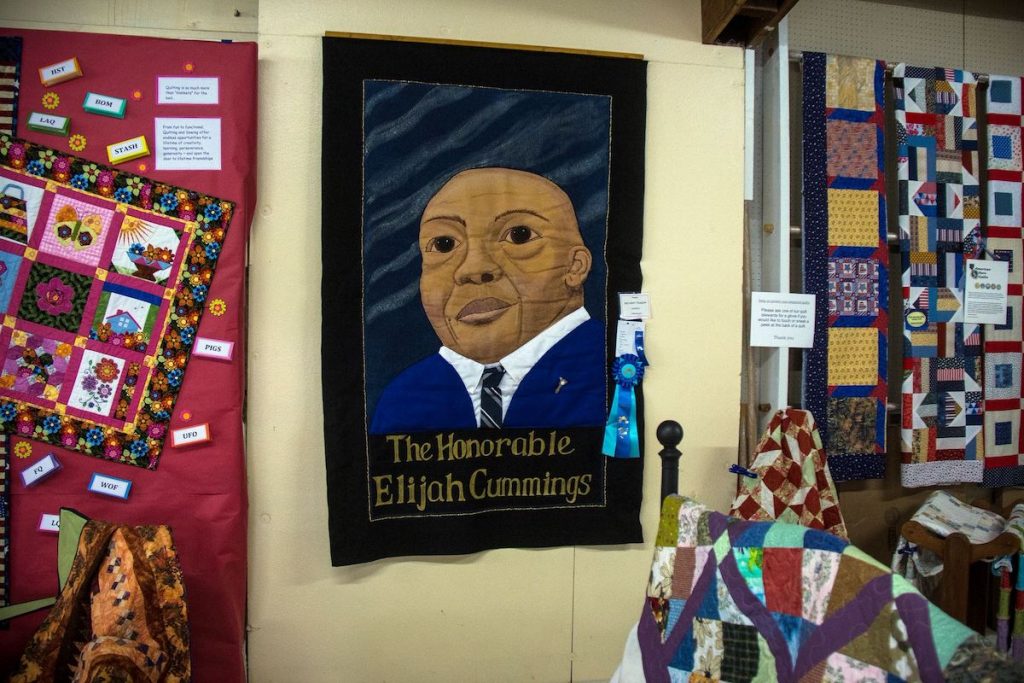 Winning top honors for her textiles at the Whidbey Island fair this year, artist Doe Stahr’s room-sized touchable art lifts spirits and taps into the heart of what naturally speaks to our soul.

Before meeting Doe last week at her Deer Creek Studio, I stopped by at Clinton’s Madrona Supply Company. Serendipity greeted me there, when I met Susan Dirkes, who was hosting a weekly knitting class at the store. Susan was the Sewing Superintendent at this year’s Whidbey Island Fair, and awarded Doe’s piece top honors, plus a blue ribbon to a mixed-fabric tapestry celebrating Maryland Congressman Elijah Cummings, who died in October 2019. Known for his civil rights’ advocacy, and as a leading figure in the impeachment against former president Donald Trump, Cummings was respected by Democrats and Republicans alike.

The Honorable Elijah Cummings is rendered in Doe Stahr’s art with a genuine white shirt collar and real tie and a look of wisdom in his sparkling eyes. It is the most recent piece from a series of portraits of civil rights leaders and distinguished People of Color.

With more than 350 pieces in her collection, her art serves “to bring cultural grandeur to public events and the private commercial banquets where intertribal and multicultural groups meet for business, education, and ceremonial events,” according to her bio.

Scroll down to where her art is displayed and read: “These pieces serve like regalia for the room in vertical setups and right on the banquet tables. At gatherings celebrating global cultures, each can find a home, or ‘travel’ to many cultural centers throughout the room.

“We dress 30 or more events each year, including Indigenous Peoples Day for the City of Seattle, and the North Puget Sound Conference on Race annual conference produced by Construction Career Collaborative in Everett. We serve major universities and community colleges of Washington for tribal leadership events, graduations, and fundraising galas for social justice non profits and political fundraisers. Multicultural Day is our favorite for serving elementary, middle, and high schools. The mixed media art displays beautifully along school corridors, and they are touchable! Our banners were carried by members of the Native Women’s drum group who led off the Seattle Women’s March in 2017. The collection is 14 years in the making, numbering 350 and growing. All this is in service of affirming the complex identities of the native and minority groups in the Northwest; and educating all the rest. Groups contract to rent curated pieces of art with installation service, at great savings over purchase.”

Following the 2008 recession, Doe reinvented her business model and now rents her ‘library’ of banners, table covers, and murals, which are steam-cleaned after they are used, rolled up and stored until the next event. The global cultures and events are her muse and her collection continues to evolve and expand.

Her work was used locally and recently, framing the walls and tables at a recent party celebrating the work of newly-retired Clinton Library Manager Debby Colfer.

Doe observes cultural protocol, in that she honors indigenous art, and respects the Indian Arts and Crafts Act of 1990. The federal law, “prohibits misrepresentation in the marketing of Indian art and craft products within the United States.”

“I am not Native born; however, I have a T’lingit name,” Doe said. “I was formally adopted in 1996. It is a privilege and an obligation to serve our regional tribes.”

Working as a potter in the 1980s and 90’s, she made pieces honoring the tribes of the Northwest Coast, Doe Stahr married a T’lingit man in the 1990s. Bob Sam is a renowned culture bearer and storyteller. Doe and Bob Sam had a daughter Roberta, nicknamed Birdie. Doe and Birdie were adopted at a potlatch, in 1996 into the Killer Whale clan in Haines, Alaska. Doe’s T’lingit name is T’saawKaawkw.

During her seven years in Sitka, Alaska, Doe observed a disconnect between museum displays of Pacific Northwest indigenous art, encased in Plexiglass, and the power of living dance and storytelling. She created a public venue where all could be experienced together. Doe produced her first art installation as dinner theater — 50 plates illustrating four of the Tlingit creation stories Bob Sam had previously performed with the Naa Kahidi Theater, from Juneau Alaska.

“Bob was the storyteller of the dinner theater,” Doe recalled about her former husband, with whom she is still on friendly terms. “Bob Sam had the scripts for the stories and the right to tell them. In 1995 I made dinner plates to illustrate the stories. It was well received in Sitka. It could work here.”

“My art is shown on a larger scale here in Washington State,” Doe added. “In 2005 I started making hand-painted textiles. I design them for use vertically and horizontally. They even appear in parades. They led off the Women’s March in 2017.”

Starting with 6×6’ panels of polyester felt, Doe uses latex paint for the main design elements, and embellishes them with beads, shells, buttons and stones. Her designs reflect Pacific Northwest tribal art, North American indigenous art, African, East Indian, Hawaiian, Japanese, Philippine and global influences. All serve to make everyone feel included and honored at events. Consent to do this work derives from her working relationships with major intertribal organizations and multicultural nonprofits.

Visiting Deer Creek Studio recently, Doe took me on a tour of the property where her textile art was displayed outdoors for a party. She has lived on Whidbey Island since 2005. “My husband Michael Clyburn has supported my art and acts as my chauffeur, mechanic, roadie, and support crew,” she said, leading me through outdoor ‘rooms’ framed with her textiles, gently blowing in the breezes. In a cedar glen, two old cedars were draped in pieces honoring Fog Woman, and Raven with their daughter Copper Woman. The scene gave me goosebumps of spiritual connection.

“I hear from people that my art sparkles with energy,” Doe said, adding that she believes her art gains energy from its travels to many places and the people it touches. “They may as well be a recording device for what is being perceived in an audience.”

Recalling one event, honoring Native Americans, Doe said an elderly woman was brought in a wheelchair to a table covered with one of her designs. “I took to my knees and talked to her. She was blind. I told her I was sorry she could not see my work. The elder said, ‘Honey, I can see just fine,’ as she read the patterns with her hands like Braille.”

Meanwhile, Doe set up her work at a table in Whidbey Island Fair’s Arts and Crafts building, sewing tiny beads on a Hawaiian print she had painted and adorned with Hawaiian Koa tree seeds. She recalled talking with a visitor who was deeply moved by the design.

“I may leverage my work to serve whole communities, but in sweet moments like these, my work finds meaning,” she said.

Creating art out of Plein Air