One of the Fab Four retires 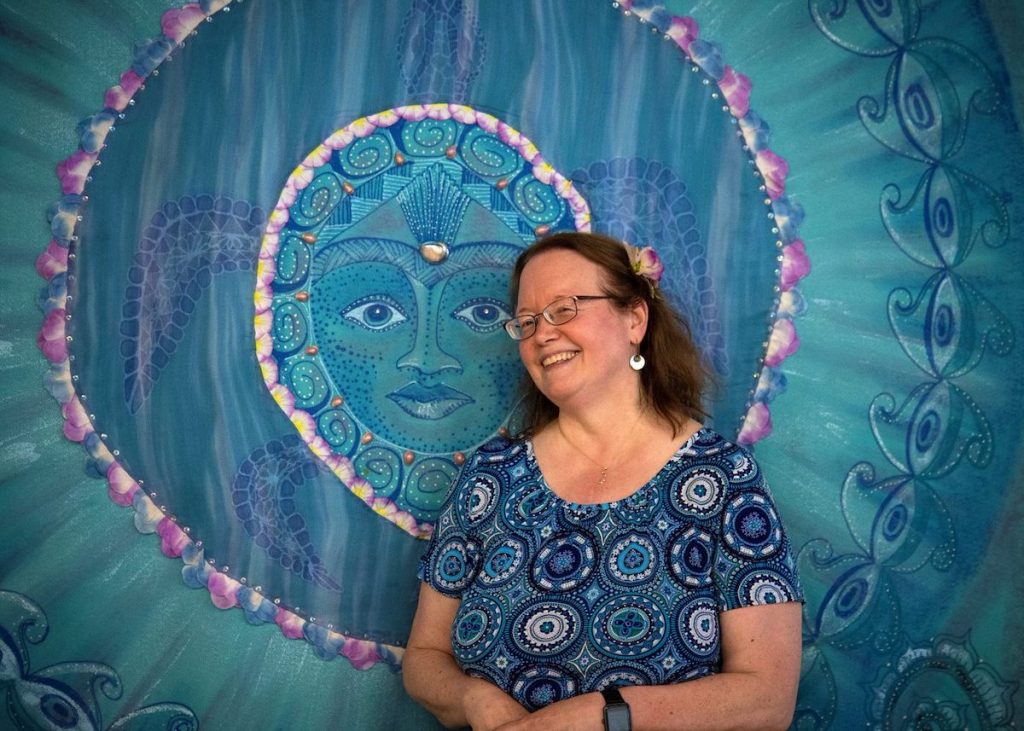 Taking it all in -- Clinton Library Manager Debby Colfer is framed by a Native American-inspired textile created by Doe Stahr, of Deer Creek Studio, whose work has been featured at the library. Debby retired after 21+ years managing the Clinton Library

The Fab Four — Sno-Isle Library managers from Coupeville to Clinton — are Leslie Franzen, Betsy Arand, Vicky Welfare, and Debby Colfer. Debby retired last Friday after 21-plus years managing the Clinton Library, which many say is the heart of Clinton. A party in her honor was held Saturday at the Clinton Community Hall.

Debby and I visited last week, catching up. We chatted about her family: partner Frank Cargill (he’s listed in the phonebook as Computer Doctor); her son Gregory, (who some might recall, starred in the role of Inspector Javert in Les Miserables, performed at South Whidbey High School in 2004) who lives in Bellingham, his son and her grandson Hector, who is 11 and will spend a week with his grandparents this summer. About Gregory’s diagnosis of Hodgkin’s Lymphoma, his treatment and his recovery. Debby was one of eight children on an Ohio dairy farm, which instilled the Midwestern working ethic. She mentioned milking cows when starting in fifth grade. And later losing two siblings, one a twin.

“Two siblings died before reaching sixty—a kick in the butt, having lost both,” she said. “It puts it in your face. I want to retire while I’m in good shape and able to pursue my interests. I am very aware that we do not know what tomorrow may bring.”

She is in good shape following full-time work at the library. “I have loved my job the whole time and am a bit nervous about the lack of people I’ll see once I retire,” she said. “I literally saw the customers more than I did my family the past 22-plus years. I love the social aspect of work.”

Debby mentioned at her retirement party that the hardest part of work was tending to administration tasks in her office, while hearing a familiar patron’s voice and wanting to go out and visit.

Moving to Whidbey in 1989 after working at the University Bookstore, books were her social life. And they continued to be in the years to come.

“I didn’t know a soul,” Debby recalled after first moving to the island. “I wanted to be a stay at home mom.” Debby also wanted to continue learning and took a Women in Transition workshop, which led to her eventual return to school.

Attending Western Washington University, she majored in Human Services with an emphasis in Parent Education. “There’s not a lot of jobs for parent educators,” she said. “But I was hired as a Children’s Liaison for the Langley and Freeland libraries.This was a great job for me. My love of sharing books started early when my third grade teacher let me read to the class while she graded papers. I loved it.”

Langley Library Manager Vicky Welfare was part of the team that brought Debby into the Sno-Isle Library family.

“I was on the hiring team that originally selected Debby to come work for Sno-Isle as a Children’s Liaison,”  Vicky wrote in an email. “Her cheerfulness and enthusiasm seemed a perfect fit for someone who would be working with children, and she immediately became a valued member of our team. It was exciting to see her become the very first Library Manager of the brand new Clinton Library.”

Gwen Goodbee, a now-retired library associate who opened the brand new Clinton Library in March, 2000 with Debby, recalled the early days with fond memory. They organized a welcoming place where people liked to gather and visit and get bibliotherapy as a benefit.

“I used to work at the Langley Library with Debby and we said, ‘Wouldn’t it be incredible if we we both got the job at Clinton?” Gwen said. “We both got the job. It was an art making the library the way we wanted. A friendly community building. We were meant for it and we didn’t have to try hard. Rob Noble (page at Langley Library) came in a couple of times a week to shelve books. What I love most is the love she put into the library.”

Some of the love and imagination is evident in a sculpture at the front of the Clinton Library. A bronze rabbit whose front paws welcome a trio of seated squirrels is usually wearing a dress. The Georgia Gerber bronze was gifted to the library in 2007 by Friends of the Clinton Library, Eric and Linda Falken in memory of Eric’s aunt, and donations from other community members.

Debby enjoyed dressing the welcoming bunny in seasonal and festive dresses and mentioned that before she retired, she dressed it in readiness for July 4th.

A Clinton Library patron stopped by at Debby’s retirement soiree and kissed Gwen’s hand while we were talking. Peter Van Giesen used to come in with his wife and after she died, Peter went through hard times. He told Debby previously that she and Gwen and the Clinton staff helped pull him through his grief. A letter he gave Debby brought her to tears. Later that afternoon he talked about buying a motorcycle at the age of 75 and couldn’t wait to show it to Gwen.

Before her library career began, Debby wondered if she would fit, because she enjoyed talking to people and had a notion that libraries were only supposed to be quiet places.

“I thought working at a library would be good, but thought I couldn’t be quiet enough,” she recalled. “Clinton became a social hub where we were friendly and made people feel welcome. We were there if someone needed someone to talk to. I remember several customers who said that when they were feeling down, they visited the Clinton Library and they felt better by the time they left.”

Vicky Welfare commented on Debby’s success with running Clinton and the road soon to be taken in retirement: “Over the years Debby became a trusted friend and colleague. The Whidbey Island library managers bonded over monthly commutes to managers’ meetings, sharing concerns and triumphs over ferry rides and Thai or Mexican food lunches. I knew I could count on Debby as someone I could go to for advice and an honest opinion. She will be deeply missed. I wish her all the best as she begins her next chapter!”

A third library anchor, who found her niche in library work joined Debby and Gwen in the early days of the Clinton Library. Kathy Rothschild still works there as a library associate. “I worked with Debby close to 15 years,” Kathy said at the retirement party. “She is the most compassionate, empathetic supervisor.” Her eyes welled with tears. “Every time I come to the library, I feel like I’m coming home.”

Someone who felt at home at the Clinton Library is singer/poet Peter Lawlor, now 99, and currently home bound with health issues. He was a regular charmer at Clinton and often brought his visiting girlfriend Roberta Brown along to check out books, music and DVDs.

“Peter came in and sang and recited his poetry,” Debby said.

It was a transition for Debby’s ‘home away from home’ during COVID and the library’s closure for three months, followed by contact-free service for nearly a year.

Patrons discovered the library’s databases, e-books, online audiobooks, digital magazines, streaming movies and music, as well as having 24/7 access to Sno-Isle Libraries’ many resources. That is all well and good, but not the same as human contact. When the library re-opened, there was the return of the human connection Debby Colfer so enjoyed.

“There is something about seeing books,” Debby added. “When we opened, a mom with kids came in and practically danced. They were giddy.”

Another of the Fab Four is Leslie Franzen, manager of the Coupeville Library. She wrote in an email: “She deserves a wonderful send off. As a temporary manager at Freeland Library in approximately 1997, we met in or near a closet in the meeting room at Freeland Library.

“I remember feeling a real kinship with Debby right at the beginning, because of her work with the Freeland Friends, fundraising, community building and the various other community groups she was involved in.

“We both hold a real passion for libraries.  Plus….twins unite!  (Leslie Franzen has a twin brother). That was a bonus.

“I remember thinking that Debby should apply for a library job and she did!  Vicky helped with that piece by hiring you as a Children’s Liaison!

“Over the years,  the “Fab Four”  Whidbey Island library managers have done wonderful road trips- putting many miles on a trusty red Toyota, building community through our problem solving and good food!

“Debby is well-loved, a true community treasure and a dear friend. Debby spreads joy wherever she is. Happy Retirement and happy reading….you are the best!  Hugs-Leslie.”

And Debby’s other Fab Four compadre, Betsy Arand, manager of the Freeland Library wrote in an email:

“Debby joined the Friends of the Freeland Library when they were raising money to build a new library building. Through an amazing community effort the Friends raised $220,000 by holding book sales, bake sales, barbecues, quilt raffles, bowling nights, and more. After the library was built, Debby remained an active member of the Friends, serving on the board as the Program Chair.

“When Sno-Isle hired Debby as the South Whidbey Children’s Liaison, she excelled at nurturing children’s connections with stories. When my mom was on the island, she would take our youngest daughter to Debby’s pre-school story times. I remember my mom telling me how much she enjoyed Debby’s story times and that her smile just lit up the room and was so welcoming!

“The first time I worked professionally with Debby was a visit to the Clinton Library in my role of Whidbey’s roving librarian. Part of my job was to evaluate the library’s collection and make detailed notes about the kinds of books that were popular in Clinton. The best part of this job was getting to know staff in each library. I had such a good time talking with Debby that I wanted to do that instead of finishing the evaluation sheets!

“It has been a joy being Debby’s colleague for so many years. She is thoughtful, wise, cheerful and kind and I will miss working with her.”

What will Debby do after being a part of a popular social hub? Catch up on reading, she says. After working full time she only read three books a month. “I used to read three books a week,” she said. She also plans to explore Whidbey Island and the Pacific Northwest. And she will visit our libraries.

Kate Poss’s note: I worked as a substitute Public Services Assistant and got to know Debby and her staff between 2009 and 2014. I marveled at the feeling of bonhomie at the little library and always appreciated Debby’s hair ornaments with flowers. She is a gift, and I look forward to seeing her bloom in a new direction.

Debby spoke about the power of libraries, a place where “people can gather and feel a sense of community with others without having to spend a bunch of money. The whole idea of libraries is to create opportunities for community connections and life-long learning. It’s a great mission.”

In the mean time the Clinton community can welcome Kaley Costello, current managing librarian of the Lakewood/Smokey Point Library in Arlington, WA. She was selected to be the new manager in Clinton. Kaley was hired first at the Langley Library before taking the management role at the new Arlington location.