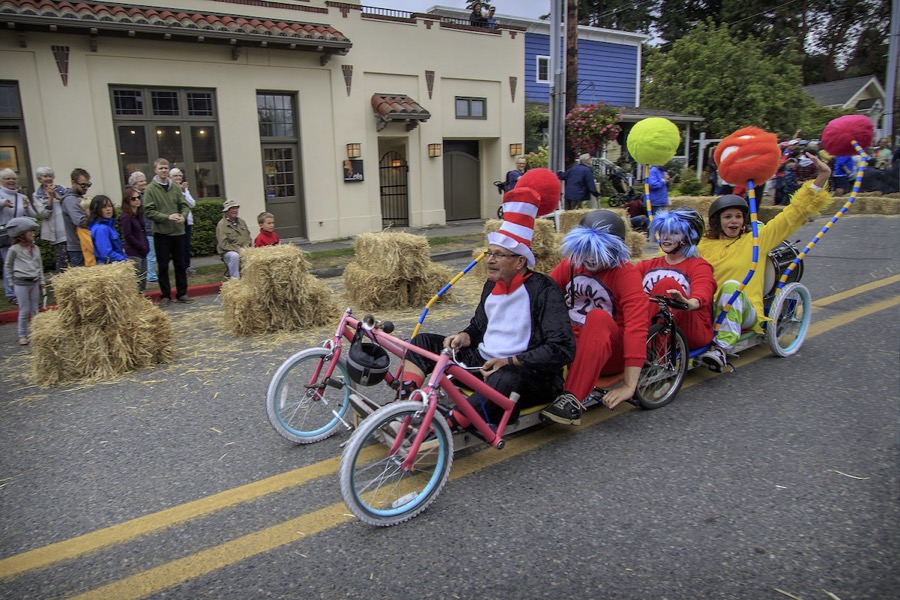 Racing in Langley's annual Soupbox Derby in 2019, Mayor Tim Callison in a Cat in the Hat hat, and his wife Robin Black in yellow

A man of many suits, Langley Mayor Tim Callison retired June 18, following six years of piloting our ‘Village by the Sea.’

City trucks and cars, along with friends, drove by City Hall June 18, honking in salute to a popular leader.

Mayor Tim, known for his creative costumes when appearing at events, retired two years before his term ended. He and his wife, First Lady Robin Black, moved to a home outside city limits that accommodates his daughter and young grandchildren, while her husband is away with the Navy. The mayor and city council are legally required to live within the city.

Dressed in shorts for his farewell party, Mayor Tim said, “I’m looking forward to the freedom.”

Langley City Councilman Peter Morton has worked with Mayor Tim and wrote this in an email:

“Tim Callison was Mayor when I was elected to the Langley City Council, and I’ve been a close observer to his service for the City. He’s been a solid leader for the City Staff, a great moderator at Council meetings, and an extraordinary ambassador for Langley to Whidbey Island at large and the State of Washington. He was elected by his government peers to preside over the Island County Council of Governments, known as the COG, which consists of the County Commissioners, Mayors of our cities and towns, and administrations of our Ports. In that role he provided vital inter-governmental communications, and kept Langley’s interests, needs, and contributions to Whidbey Island in the consciousness of our peer jurisdictions.

“He was a visionary in advancing the infrastructure of this small city, partnering with Council member Dominique Emerson to acquire an Island County grant of $3M, and making the case with our own city voters to see the value and overwhelmingly adopt a $4M bond to fund the $7M Langley Infrastructure Program for which the engineering phase is approaching completion.

“This is my first experience in politics and small city government, and I’m told the stability in staff and elected officials we have enjoyed over the last few years is unusual in Langley’s history, and perhaps that of other small towns. Much of this is due to Tim; who presided with style and substance from the beginning of 2016 to mid 2021. He may be remembered for his white tuxedo appearances at City events; history will equally celebrate the concrete and measurable achievements in governance and land use regulations that emerged during his term of office. I’ve often said that participating in city government feels like a college anthropology assignment observing what it takes for some 1100 people to live together constructively; it has been fulfilling to share my time in office with Tim Callison, Mayor of the City of Langley.”

At Mayor Tim’s adios event, First Lady Robin Black joined him with their daughter Jessica Lee, and her children Baker and Hudson.

George Henny, CEO of Whidbey Telecom, stopped by Mayor Tim’s soiree and said, “I am a fan of Tim’s. I’m president of the (Island County) Economic Development Council. Tim is on my board. His energy is inspiring.”

Scott Chaplin was chosen as the new mayor by a vote of 3-1 at the June 21 council meeting. After being sworn in, he took over running the meeting. Scott’s experience as a city councilman in Carbondale, Colorado, along with his vision in building community, and lifelong commitment to public service, gives him a solid history in leadership.

“The organization I founded was called the “Sustainability Center of the Rockies” (SCoR); and it eventually merged with an affordable housing effort and also to the transformation of an elementary school into the Third Street Center, an energy efficient, solar powered community center with space for numerous local organizations,” Scott wrote in a June 25 email. Visit Third Street Center to learn more about this “Social Impact Incubator Powered by Community and Sunshine.”

Moving to Langley in 2008, Scott has lived within city limits since 2015. Active in Island County Democrats, and serving as its chair in 2017/2018, his focus is on affordable housing, protecting natural resources, and community building.