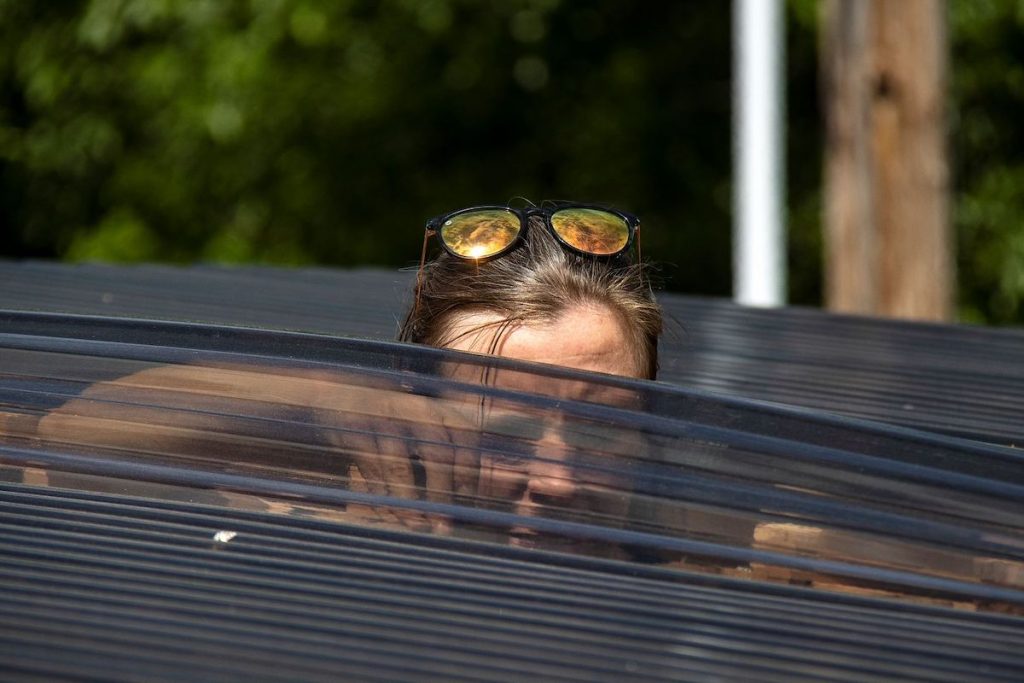 Sunglasses on Andreas Bakkebø, a UW Neighborhood Design/Building Studio student, who was part of the team that designed and built the South Whidbey Tilth's farm stand

One of the most heartfelt places to buy local produce on the island is the South Whidbey Tilth farmers’ market held on Sundays from April through October.

For a recent while, Tilth members looked at building a welcoming entrance building and expanding sales of its members’ locally-grown produce beyond the six month farmer’s market season.

As a gift from the community, and celebrating Tilth’s 39th birthday, a new year-round farm stand, built by students from UW’s Neighborhood Design/Build Studio, now greets visitors as they enter the Thompson Road location of The Tilth Farmers Market and Garden. Its dedication was celebrated June 9.

In sharing the evolution of the saltbox-styled farm stand built as a community service by UW architecture students, Susan Prescott, known locally as Prescott, wrote in a recent text:

“South Whidbey Tilth is dedicated to cultivating living soil and community to build an environmentally sound and socially equitable food system. The inspiration for the farm stand was to make locally grown food available to our community year around, especially with the ripening of apples, pears and nuts in the late fall.

“The Tilth Farmers’ Market season ends around mid-October. Tilth members looked for a way to attract and welcome more visitors year-round with a beautiful entrance. The farm stand, a pollinator-friendly hedgerow, and an information kiosk are part of the plan.

“Tilth leases garden plots to families and small farmers to raise vegetables, flowers and eggs for themselves, with an opportunity to sell extra from the farm stand. The plot sizes range from a quarter acre to 20-foot square spaces. Many have set up hoop houses to extend the growing season.

“The original design for a farm stand was a simple, rectangular shed, possibly rodent-proof with a cold storage component. Another concept involved a cob-built structure. Both ideas relied on volunteer energy and money. Steve Badanes has been a regular customer to the Tilth Farmers’ Market for many years. He is a Howard S. Wright Professor of Architecture at the University of Washington. He’s also operated the Neighborhood Design/Build Studio at the UW.

“We began picking his brain for a design. When he learned about the farm stand, he suggested his program. It still required money, but it meant his students would build it. The class meets in the spring to design the structure, research materials and build it by June graduation.

“The Covid-19 pandemic quickly put a wrinkle in the 2020 process. Students met and worked entirely online, but could not to build the structure. The 2020 structure included a larger footprint, including an open uncovered area for visitors to gather for a class about growing or preparing food. Leaving that portion uncovered prevented the need for a permit. Some Tilth members were concerned that the iconic 2-inch by 2-inch lattice framework did not blend in with the design of the other campus structures, was too flimsy and would not protect contents from wind and rain.

“An earlier farm stand structure had blown over during a winter wind storm. Designing to gathering socially became less attractive during the pandemic.

“The 2021 class looked at the 2020 design, got feedback from Tilth members, and designed a simpler concept that includes sturdy shelves, more of a roof overhang in the back facing south, where the prevailing wind comes. The students said the 2 inch by 2 inch lattice construction in corner blocks is both very sturdy and gives the appearance of airy lightness. The roof is a sturdy polycarbonate material, tinted to reduce bright sun while letting in light. Sales counters were eliminated in favor of an open floor space for tables to be moved for display or work.

“The price tag of approximately $10,000 was lower for this version, even with the increasing cost of material. A fundraising campaign to raise $15,000 is still underway for amenities, such as a cold storage unit in the back, which would also protect the stand from weather.”

Hands on projects and UW’s legacy of the Fremont Troll

Steve Badanes, who co-teaches with Jacob LaBarre, met with their class at South Whidbey Tilth last Friday to complete work on the farm stand. Its design is pleasing to the eye with its horizontal cedar beams and saltbox style.

I spoke with two of the class’s women students, Ghida and Azita. They said this was the first time they had used a saw and hammer and nails in construction.

“After our online classes, it was too much screen time,” said Azita. “This is a practical class. I (became) not afraid of using power tools.”

Ghida added, “I wanted a hands on experience like this. I’ve never handled tools before.”

Speaking of hands-on experience, another of Steve’s projects became a famous landmark.

“The Fremont Troll was built with UW students and equipment, but it wasn’t for a class,” Steve clarified in an email. “Two UW students and myself won a competition for the space under the bridge and built it with volunteers.”

Built in 1990, the Volkswagen-clutching Fremont Troll still lives under the Aurora Bridge. Now a tourist attraction, the Troll is a touchstone, with its one eye, a VW hubcap, gleaming in the light.

Steve is fun to talk to and his enthusiasm for teaching the past 30 years hasn’t waned.

“It’s a good job and I’m on my own, which I’m glad of,” Steve said, talking of the free rein he has in teaching this class. Steve’s wife, artist Linda Beaumont, took photos of the building’s dedication,

On June 9, South Whidbey Tilth invited the projects’ donors and Tilth members, along with the 2021 UW Community Design/Build instructors and class to celebrate the site’s newest building.

“Here’s a bit of a writeup about last night’s dedication and ribbon-cutting, which began at 5:30 p.m. on Wednesday, June 9.

“It was a merry gathering with most of the 10 students and their friends or spouses, as well as instructors Steve Badanes and Jake LaBarre, plus Jake’s 17-year-old dog, Hattie. Tilth was represented by members and its eight-member farm stand committee. All enjoyed tapas by South End Kitchen and some homemade treats, chased down with champagne-type bubbly and lemonade. The late afternoon sun made pleasing shadows through the trellis-like slats of the farm stand. A strong north wind came up, scattering paper plates and napkins, for a brief time.

“Jake and Steve had come earlier to add more stabilizing to the structure stakes and roof screws.

“Tilth President Gary Ingram welcomed everyone and introduced Steve, who explained the process for engaging students and a nonprofit in a design problem, and the construction for the Neighborhood Design/Build Program, which he has headed for 30 years.

“The South Whidbey Tilth Farm Stand is the program’s first out-of-Seattle area project. Both, Steve and now Jake, have Whidbey Island bases. Steve said the lumber had been sourced from local family operations in Seattle and on Whidbey —Hanson’s. The 2×2-inch trellised cedar structure has proven very stable, as there are no knots in the wood and the cedar was surprisingly affordable.

“Steve listed the funding sources of the program as well as those of Tilth. Tilth’s largest donations came from Goosefoot  Community Foundation and $1,000 from Tulalip Tribes Charitable Contributions. The remaining 54 donors from the South Whidbey community contributed funds ranging from $10 to $1,000.

“(Tilth volunteer) Lynae Slinden and (I) Prescott (Susan) were summoned to snip the ribbon amidst cheers. Several local gardeners signed up to be contacted to sell their wares from the stand, which will be open daily, except Sundays during the farmers’ market season. Initially it will be an honor system and self service.

Prescott later emailed with details of Tilth’s origin story, which evolved from the first farmers’ markets fifty years ago:

“We are celebrating the 50th Anniversary of farmers’ marketing on South Whidbey. In 1971 Myrna and Sean Twomey and Rose and Jerry Dobson launched a market just after the Fourth of July holiday in an old fireworks booth on some property that Myrna’s parents (Orr) owned in Clinton. When a meeting was called to form a Tilth chapter on South Whidbey on June 19, 1982, Myrna and the Dobsons were among the founding members. They invited the new chapter to take on the management of the market and it became South Whidbey Tilth Farmers’ Market. Bill Lanning owned the Bayview Cash Store then and welcomed Tilth to operate there, which it did for 18 years until Bill sold it and eventually Nancy Nordhoff bought it and established Goosefoot. That was a stormy period and two markets emerged from that. But that’s another story.”