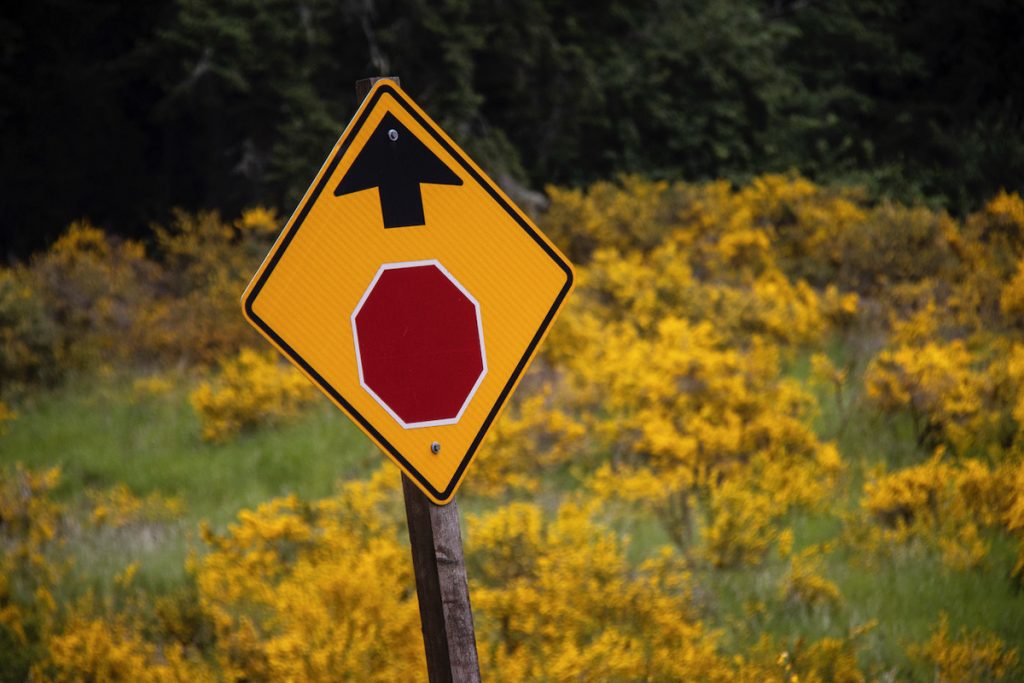 Cytisus scoparius or Scotch Broom is considered a ‘weed of concern’ in Island County. Each year the invasive shrub spreads and in this late spring season, it dominates the hillsides along Highways 525 and 20. While not required by law to eradicate it, it is recommended that landowners remove it to prevent its spread.

Considered as one of the top ten noxious weeds in Island County, the opportunistic plant was originally introduced to stabilize road berms and construction sites. With a longevity of fifty-plus years, Scotch Broom colonizes native plant habitat. Its seeds are mildly toxic to humans and animals. It displaces forests, prevents healthy revegetation of wetlands and hills, impedes wildlife movement, and is flammable.

On our state’s invasive species site: “Scotch Broom is on Washington’s Terrestrial Noxious Weed Seed and Plant Quarantine list, meaning it is prohibited to transport, buy, sell, offer for sale, or distribute scotch broom plants, plant parts, or seeds. Scotch Broom is listed as a Class B noxious weed in Washington State, meaning it is designated for control in certain state regions.”

Here in Island County, it is recommended that property owners remove it. Recommended methods include chainsawing and pulling out of the roots. Our county’s noxious weed coordinator Seth Luginbill, wrote in an email following this story’s original publication:

“My apologies for not responding to your calls and emails. I have been out in the field doing noxious weed removal work along county right of ways and other county owned properties. I greatly appreciate you getting the word out on Scotch broom as well as some of the other weeds we currently face here in Island County. The more people know and address these weeds. the greater the chances of making headway are.

There are three classes of noxious plants in Washington State. All are non-native plants. Class A plants — such as certain thistles, knapweed, and cordgrass — are still limited in their range. Eradication is a priority and required by law.

Class B plants fall into regulated and unregulated categories. Management of Class B plants, according to the county’s website, covers: “Non-native species presently limited to portions of the State. These species are designated for control in regions where they are not yet widespread. Preventing new infestations in these areas is a high priority. In regions where a Class B species is already abundant, control is decided at the local level, with containment as the primary goal.

“When controlling an invasion of noxious weeds on a parcel of land there are several different methods of control that can be implemented by the land owner. It is best to use a combination of multiple control methods or intergraded pest management (IPM). Methods of control are physical, mechanical, biological, cultural, and chemical.  Island County Noxious Weed Control Board (ICNWCB) provides resources to assist land owners with developing and implementing control strategies. When landowners need assistance with identification or developing a control program the ICNWCB has a program coordinator who can assist with any issues that might arise.”

And Class C plants, such as Bull Thistle and Canada Thistle, are regulated and property owners are mandated in Island County to eradicate them. With the many unregulated Class C plants such as Absinthe Wormwood and English Ivy, the plants are widespread and property owners are advised to manage the plants’ proliferation. For instance, when my husband Bill and I go out walking, we pull English ivy off of fir and cedars in our neighborhood.

Other solutions to preventing invasive plant spread include planting native plants, contacting the county’s noxious weed website to identify and remove plants such as Poison Hemlock, Tansy, and Spurge Laurel; along with watershed-impacting plants such as: Spartina, Knotweed, and Hairy Willowherb.

Removal tips:
For smaller to mid-sized plants we have found that removal using a weed wrench or pitchfork is fairly effective. Care must be taken to remove all the root system as new plants can regenerate from root fragments.

Larger plants (stems  with a diameter > 3/4″) can be treated through a cut and paint application. This is achieved by cutting plant close to the base of the stem and then applying a small amount of systemic herbicide over the exposed stem with a paintbrush or dabber. This is useful in that it minimizing the amount of herbicide needed to treat a large infestation and it will translocate down into the root system.

There are some biological controls that can be employed in containing Scotch broom though they will rarely provide eradication or control. A Scotch broom bruchid (Bruchidius villosus) and a Scotch broom seed weevil (Exapion fuscirostre) have both been released along Island County roads and the highway in an attempt to help minimize spread. They have varying degrees of success, but can be helpful for unmaintained lots, steep bluffs where access is not possible, or areas were more aggressive strategies are not yet ready to be implemented.

While you can remove Scotch broom anytime of the year, the best time of year to do removal work is spring or fall, when the plant is actively transporting nutrients and resources, either towards seed production (spring) or root growth (fall).

Lastly, we do provide some resources in the form of on-site visits to help landowners come up with a strategy that best suits their needs. We also have a free weed wrench rental program. Any Island County resident can come and check out a weed wrench to help with removal of broom or other woody invasive species.

Finally, in order to encourage proper disposal, all noxious weed material can be taken to Island County solid waste facilities and disposed of free of charge. Simply bag or tarp the cuttings to minimize accidental spread of seeds or reproductive material during transport. This hopefully helps minimize the chances of re-establishment once removal work is done.

The public can also fill out a noxious weed report form and send it to Seth.

In the mean time, Scotch Broom provides a bright yellow reminder of its takeover.

The human right to shelter