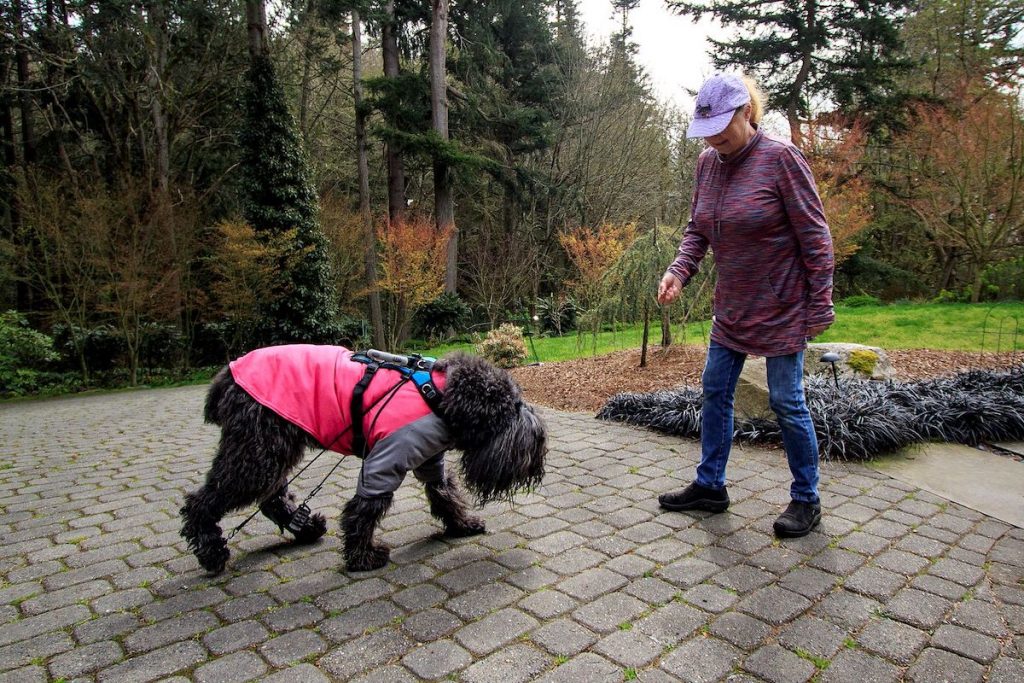 Leda, a Bouvier des Flandres breed, enjoys walking now that her arthritic back legs get support via a simple device invented by Jeff VerHoef of Canine Mobility. Leda is with her owner Georgia Edwards

Leda the Bouvier des Flandres is a lovable and social dog whose idea of fun is visiting her favorite places in Langley, our village by the sea. Three years ago serious signs of arthritis showed up in her hind legs. Her owner Georgia Edwards, who is featured with Leda’s father Hawkeye in our story Riding the bus with Maribeth, Wendy and Jack, researched a number of modalities to keep her girl moving, healthy, and as comfortable as possible.

“I’ve had Leda  since she was born nine years ago on April 26,” Georgia said. “She developed really bad arthritis in her rear hocks, the equivalent of our ankles. I tried compression wraps, but the joint was really broken down. Normally you would operate on the dog and fuse the joint. The fact that she’s had a chronic infection would not make it safe for surgery; the operated site would get contaminated.”

Bouvier des Flandres translates from French/Belgian to ‘cowherd of Flanders.’ The breed, which dates back to the early 1900’s, and is valued, according to the AKC description, for its “stocky, intelligent, hard-working, big-hearted dogs with a history of earning their keep as herders, watchdogs, guardians, and cart-pullers.” Courageous in aiding soldiers during WW I, Bouviers later evolved to work as K9 dogs with European police and as guide dogs for the blind.

One of Leda’s jobs is visiting the Langley harbormaster at the marina to get cookie treats. Georgia said the visits are actually part of her therapy— Leda enjoys visiting people and getting loved in return. It’s one way Georgia can encourage the Bouvier’s walking in the face of her dog’s arthritic pain and movement challenges. To assist with walking, Leda is supported with braces, goes for rehab therapy, and has been fitted with a device that helps her walk on her foot pads instead of her knuckles.

For the brace, Georgia contacted Jeremy Uronis of PawOpedic, located in Issaquah. The independently-owned business fabricates braces and artificial limbs for pets.

“Jeremy made a rigid brace, custom made,” Georgia said. “Because of overusing her right leg to compensate for her left leg, she developed arthritis in her right hock. She has a soft brace for that.”

With Leda’s hind quarters needing support, Georgia bought a cart from a then-local company that made rear supporting dog wheel chairs. K9 Carts were based on Whidbey for 15 years, but moved to Florida in late 2019. The small family-operated business still has an office on Whidbey where Barbara Parkes can make fittings and evaluations. Nowadays, all production is out of Florida.

“But I haven’t used the cart, yet,” Georgia said. “When both legs are useless and suspended in straps, the cart works. Leda hasn’t gotten to that point yet.”

“The easiest thing for her is swimming,” Georgia added. “It’s too cold in the Sound. I take her to Wellsprings K9 in Seattle, where she works with Sheila Wells, a pioneer in underwater dog therapy. Sheila has a pool with current for dogs to swim against; they swim in a harness for support and she’s in the water with them doing massage and being sure they’re moving the injured body part correctly. There is also the Northwest Animal Care Hospital in Everett and Sound Veterinary Rehabilitation Center in Shoreline, which have underwater treadmills. I also take her to Stephanie Garlichs of Whidbey Canine Conditioning & Rehabilitation in Coupeville. Leda was doing fine with that. In November she had a spinal cord stroke. She became very weak in her rear legs and could not pick her rear feet up, her toes were knuckling under.”

Sheila Wells emailed with a couple of Leda swimming photos. She wrote: “I’ve been doing Licensed Canine Massage and Swim Therapy Rehabilitation work with dogs since the early 1990’s. I put in a therapy pool exclusively for dogs in 1994 in West Seattle.  For the past 27 years I’ve done therapy for thousands of dogs with acute and or chronic conditions. Pre- and post-op orthopedic surgery, spinal cord injuries, many neurology issues, arthritis, any type of mobility problem in the dog. Got my start in the 60’s at a local racetrack where I grew up assisting with the rehab process of horses, including water therapy. As an RN in physiotherapy in Canada, we used pool therapy for stroke and spinal cord injury patients to help regain strength and mobility. It seemed natural to do the same for dogs when there was nothing such heard of or available for them. I employ licensed canine massage, craniosacral therapy, therapeutic touch, acupressure, and of course, swimming to enhance, strengthen and rehabilitate my clients. Leda came to me as a baby puppy initially to learn to swim and then seven years later when she needed intense strengthening and neural therapy for her problems. She is the sweetest and most engaging girl. Always eager to work and calmly follow instruction for her therapy and exercises. Yes, with the helicopter tail. And her owner Georgia is amazing, trying the things I suggested , support braces, wheelchair swimming and several other practitioners to enhance Leda’s quality of life.”

Meanwhile Stephanie Garlichs, a veterinarian certified in canine rehabilitation, sent an email including photos of her cat and dog patients.

She wrote that canine rehabilitation requires: “…an extensive training (and two day exam) given at the University of Tennessee. Much like physical therapy in humans we help animals exercise in prescribed ways to heal and strengthen injuries and surgeries. DVM’s may perform animal rehabilitation in Washington state and must supervise anyone who is not a DVM. We have the advantage in that we can diagnose, but I also take referrals from veterinarians all over the island. My office is the only rehabilitation facility in the island so we are quite busy. It is super fun and I get to spend lots of time with each patient!”

As one of Dr. Stephanie’s patients, Leda was treated for a number of symptoms, but her stroke caused her rear legs to knuckle. Dogs can wind up walking on their knuckles, a painful experience, due to stroke, arthritis, joint weakness, and degenerative diseases. Knuckling happens when a dog’s rear leg and paw fail to flex properly when walking.

Researching orthopedic devices which claimed to remedy Leda’s recent setback resulted in futility for a while. Georgia at last heard of Jeff VerHoef and his cottage business Canine Mobility llc. Jeff said he was frustrated when his dog Reilly developed a knuckling issue following a spinal laminectomy to remove bone spurs. Jeff, too, paid for orthopedic aids that didn’t work until he came up with his own design, which has since met with success. During a recent phone call, Jeff said he’s now fitted an estimated 500 dogs with his Canine Mobility Anti-Knuckling Device. He visited Leda April 4 and fitted her with a bungie cord device of his design attached to her back toes and clipped to her harness.

It went really well with Leda,” Jeff said. It is working and helping out. She was able to go on a quarter-mile walk last weekend. (April 17 and 18). The device helps the dog to lift their toes. The second benefit is the tension from the shock cord, which creates an isometric exercise for their muscles.”

As noted in the Canine Mobility brochure explaining the knuckling process, owners may first notice their dog’s hind paws “scraping the toenails along the ground and progress(ing) to actually walking on the knuckles, rather than the pads of the foot.”

Following use of the simple aid, Leda is walking better, Georgia said.

“Leda is not dragging her foot,” Georgia said. “This should avoid any further damage. She likes to go Langley. She’s very sociable. She wants to be sociable. At the marina she watches the birds, the people getting off and on their boats. It keeps her going and maybe helps her forget she is uncomfortable. She takes medications. By and large her days are good. Her tail goes round and round like a helicopter. She likes to engage. She is a very sweet dog.”

Throughout her years of care, Leda enjoys regular visits with Liz Johnson, an animal rehab practitioner, whose four-legged clients run to greet her whenever she shows up at their place. We ran a story in This is Whidbey two years ago about Liz’s ease and success with animals: Listening to animals.

In a recent text, Liz wrote: “…About the therapies I use on handicapped dogs. It’s mainly passive range-of-motion after massage, craniosacral therapy, and various modalities of neural stimulation and acupressure. The goal being to support the body, organs and limbs and keep them functioning on vascular levels with as much mobility as possible. I also work using homeopathic remedies. Some of these therapies are easy to teach the pet owners, which can help support the dog on a daily basis.”

Throughout her health challenges, it is evident Leda remains a happy and much-loved dog. She reflects it all back by rolling on her back for tummy rubs and wagging her tail and seeming to smile through her black beard and shaggy doggy face.

Georgia adds, “All these ancillary treatment modalities were at the recommendation of her primary veterinarians: Adam Reiss, DVM DACVECC (Emergency and Critical Care Specialist); and Kristin Kirkby Shaw, DVM (orthopedic surgeon and veterinary rehabilitation therapist); without whom none of this care would have been available to Leda. She owes them her mobility and her life.”