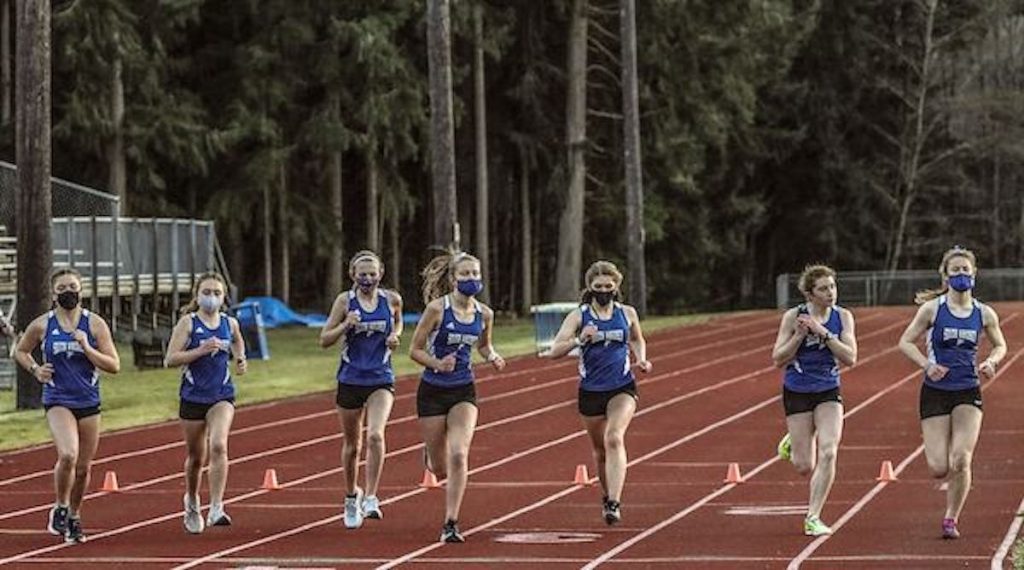 Good news! Our Falcons boys’ team won the state championship and the girls took second after the numbers were sent in. Congratulations Falcons! Brava Kaia Swegler-Richmond for earning third in state for girls. “It was just announced last night (April 23) before midnight,” writes Pat McVay, whose son Reilly McVay competed in the meet in late March. “My hoped prediction came true!”

“It was a hard fought result by both the boys and the girls and I suspect the best team result in the history of South Whidbey High School,” added Matt Simms, Matt Simms, the team’s photographer, lifelong cross country athlete, and father of Thomas Simms.

We shared the euphoria on a cold Monday night, shouting encouragement to the Falcons, 14 cross country athletes (seven on the boys’ team and seven on the girls’ team), running 5,000 meters, or 12.5 laps round the Waterman Field track.

Navigating an altered sports program that normally runs from September through November, the Falcons continued training come what may. Our year-long pandemic rerouted the season to run from February through March 2021. Perhaps the team’s camaraderie since they were in middle school forged a bond that saw them through any hurdle.

“This group is interesting,” said Patty Maddux, cross country coach for the South Whidbey Middle School and much-loved mentor to the high school team.“They started and ended together. I feel like a proud grandma.”

Matt Simms, the team’s photographer, lifelong cross country athlete, and father of Thomas Simms —a Falcon cross country team member— said South Whidbey won the district championship in 2019. At the state level the boys’ team finished fourth overall, and the girls’ team finished ninth. The season was postponed in 2020, though runners continued practicing 90 minutes a day Monday through Saturday. Since February 2021, the teams have competed with other schools throughout their district.

“Normally in cross country season, there are a number of meets, typically every Saturday, culminating in the district championship,” Matt explained. At a typical championship, South Whidbey would host 60-80 schools for this event.”

Normally took a detour in the face of social distancing, on-line/in-person classes, and shifting expectations of when and if the season would commence. This year instead of competing statewide in Pasco, WA, as they have done for the past 15 years, teams ran or will run on their home tracks, ensuring the same conditions for all competitors.

“They truly are all remarkable,” Rosie Donnelly, Falcon’s assistant cross country coach and middle school Social Studies teacher, wrote in an email. A coach who is tuned in to running, Rosie took part in the Boston Marathon in 2008. “We have been meeting since roughly the middle of June. They have flexed with the ever-changing guidelines and protocols, had to continually adjust their expectations about when the season would start and what it would look like, train as if the season might be happening anytime, but knowing all the while that there was the possibility that there might not even be a season. And these kids are the lucky ones in many ways, because running outside was something we could do together during all this time.”

Rosie’s mention of together reflects the extraordinary connection by the teammates, their families, Coach Doug Fulton, assistant coaches, Rosie Donnelly, and Scott Warwick. Coach Scott acted as a guide to one of the runners, Luc Gandarias, a senior this year, who lost most of his vision due to a rare medical condition when he was seven. Matt Simms was a running guide for Luc prior to Scott’s arrival a few years ago.

“Luc has been a classmate of my son Thomas since second grade,” Matt said in a phone call. He had a medical condition that caused him to lose most of his eyesight. “He had been a seeing kid. Lost his sight out of the blue. It was a shock. He came back to school and I would go over and sit in with him at lunch, I enjoyed being with him. I got to see his class adapt around him. Someone would grab his lunchbox and bring it to him. They would play soccer. They would get a soccer ball with a bell inside. Got him a helmet. He kept on playing. The rest is history. He was absorbed into the fold with an adaptation to his limited sight.“

Under the irresistible enthusiasm of Coach Patty Maddux, Luc and his classmates began running. Luc needed a guide. The Washington Interscholastic Activities Association — WIAA — permits guides to accompany a vision-impaired runner. Except Luc was so fast, few guides could keep up. Matt Simms was asked to fill the role.

“The WIAA allows that guides can run next to the runner,” Matt added. “They can have a string or give a touch on the arm or shoulder. Luc’s problem is he is fast and fit. He went through a bunch of guides and would head into the woods and his guide was gone. Couldn’t keep up. I was a runner since their age. I got drafted. Someone waved at me. I had my camera standing there to take pictures of the starting line. Coach said: ‘We’re desperate. Our guide runner heard of Luc’s plan for the race and said it was too fast for him.’

“Turns out, it was lot of fun. I hadn’t run cross country since college. My son was there. Got to meet his competitors, teammates and friends. A blast. There were other folks who stepped up to do the run. Then Scott Warwick came on as an assistant coach to Doug Fulton a couple of years ago. A good runner. And fast. One of his early roles was to guide Luc during practice. He was there at every meet. He gravitated to becoming his permanent guide. Scott was reliving some of those experiences, just like I did. Luc can see the difference between the lane and white marker. He has raced on the track for many years and can follow the lanes. It’s high contrast.”

Luc competed in a separate division of the State Championship in 2019, placing second in state.

Meanwhile, Coach Doug Fulton was applauded for his efforts in organizing the virtual state championships and his dedication to his team and their families.

“He really is the heart and soul of this enterprise,” said Rosie Donnelly. “I believe this virtual state meet was his idea. He got support from other coaches and has been making it all happen on a state level, not just for us here. Without him the kids wouldn’t have had this meet. And without his advocacy on the state level they wouldn’t have had nearly the season they have had. He really is the best guy with a HUGE heart, and totally devoted to XC –  the team and the kids are really like his family. Between the virtual state meet and us hosting the league championships on Saturday, this is a crazy busy week.”

Taking a moment from his crazy busy schedule while getting ready for the 12-school conference championship this weekend, Doug said he’s been Falcon’s head coach the past 24 years.

“Monday was exciting; a great atmosphere,” Doug said. “It is more difficult running on a track—cross country is all about hills and trails and a lot of variety. While track is faster, it is not the same. Parents have been super supporters. This group, the seniors, have been fantastic.”

After all the state championship competitors across Washington complete their 5K’s, the times will be aggregated. The team with the lowest time earns a ‘1.’ A ‘2’ is second place, and so on. The winners will be announced sometime in April with individual and team trophies. As of this writing, the Falcon boys’ team ranks sixth in state, the girls’ team ranks second.

In another nod to an ‘abnormal’ season, the Falcons will host the District championships a week after the State meet for the first time in state history. This final race of the season will be held this Saturday, April 3 at 3:30 at South Whidbey High School.

Meanwhile, there are more photos of the regional conference meet last Saturday. Here are Matt Simm’s words from an email received April 5:

“Wanted to share with you the photos Karen Swegler, Bob O’Brien, and I took at the Emerald Sound Conference championship this past Saturday on the actual school cross country course.  It was quite a day. Here is a link to

April 3, 2021 Regional Cross Country Conference at S.Whidbey High School
“Out  on the course for several hours I heard from athletes and coaches and parents and families and friends how much they appreciated the opportunity to be a part of such an incredible event, an event made even more special in light of the circumstances of the past year and a half.  I was effusive in my praise of the coaches and school administration for having the wherewithal to actually pull it off, and overflowed with congratulations to the runners who put everything into that day.  It was a privilege just to be there and witness it.”
Facebook Comments
cross country Falcons south whidbey high school state champtionship WIAA
Share. Facebook Twitter Pinterest LinkedIn Tumblr Email