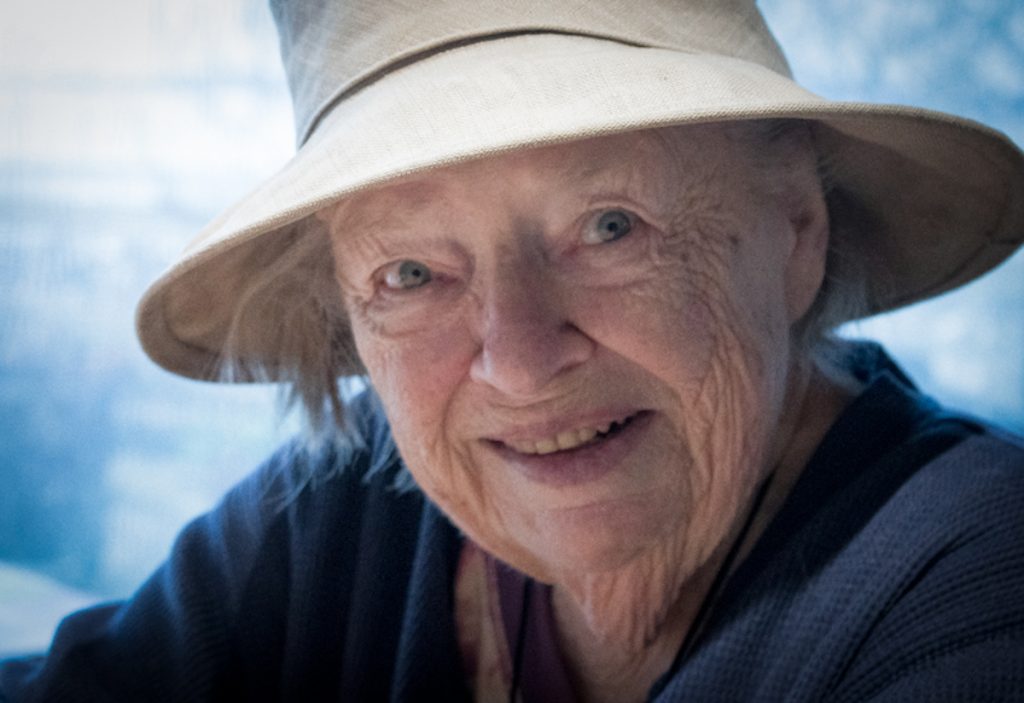 Note: here is a celebration of life written by Urashan’s children. –Kate Poss

Urashan, a musician, teacher, composer, and self-described solitary contemplative, died peacefully at age 93 the evening of the vernal equinox, March 20, 2021, at her home on Whidbey Island, having spent her final years on the same beloved stretch of beach in Maxwelton where her grandfather first established a summer encampment in 1905. Her greatest joys were to see bald eagles fly over the Salish Sea, great blue herons fishing in the tidal flats, and the setting sun traverse the horizon as it moved from solstice to solstice.

She had returned to the island to live full time after retirement, first in a small cottage in Langley, then to an angular, glass-fronted home lined with old-growth cedar on the beach of her childhood. She named her new home Maris Stella: Star of the Sea and every evening she sang the sun down with the Latin hymn, “Ave Maris Stella.”

In 2019, she published The Sacred Ordinary: The Odyssey of a Ninety-one-year-old Contemplative, a poetic work of creative nonfiction about her early life in Maxwelton and the Seattle of nearly a century ago, and her later evolution as a feminist, musician, and spiritual seeker. She also composed the libretto and music for a feminist dance-opera, Tropos: The Sacred Wheel, loosely based on the myth of Orpheus and Eurydice with the focus this time on the woman’s experience. Much of the dance-opera was created the fall of 1977 during her three-month sojourn at the family cabin on Maxwelton Beach. It was during that time that she adopted the nom de plume, Urashan, meaning lover of ancient wisdom and beauty, taking it as her legal name a few years later. Parts of Tropos were performed in various venues over the years, but the work was never produced in its entirety.

Urashan was born Margaret Jean Moritz, on May 17, 1927 in Long Beach, California. Her father, Harold Kennedy Moritz, was an engineering professor at the University of Washington in Seattle, but was working on a six-month engineering project in California at the time. Her mother, Mercedes Kronschnabel Moritz, was a Seattle school teacher until marriage. Her grandparents on both sides moved to Seattle at the turn of the last century, and her paternal grandfather, Robert Edouard Moritz, helped found the mathematics department at the University of Washington. As a girl, Urashan lived with her family in the Laurelhurst district and later moved to the University district, where her parents built a house on NE 50th Street, which was then an unpaved road.

A gifted pianist and flutist, she graduated from Roosevelt High School, Seattle, in 1944, where she conducted her first orchestra at age 15, and then graduated summa cum laude in music from the University of Washington in 1948, earning her Phi Beta Kappa pin exactly 30 years after her mother. She then went east to earn an additional degree in music from Yale University, where her high school sweetheart, Rafael Alan Pollock, was finishing his B.A. in English Literature. They married, and much of the next three decades were shaped by the trajectory of her husband’s career and the raising of their eight children. As the family grew, she taught private music lessons in New Haven, Connecticut; South Bend, Indiana; and Walnut Creek, California.

In the mid-1960s Urashan returned to graduate school to earn a Master’s in Musicology from the University of California at Berkeley, where she became politically energized, engaging with feminism, anti-war politics, and movements for social justice and equality. She began to make intellectual connections that opened the door to the creative expression and spiritual pursuits that marked the second half of her life.

After her divorce at age 52, she went back to school yet again to earn a certificate in computer programming, becoming a tutor for the younger students, and going on to program train routes for the Southern Pacific Railroad, eventually moving into software design.

More than anything, Urashan’s intellect was marked by a voracious and creative curiosity. She was an insatiable reader with an astonishing memory, possessing an electric ability to draw connections between literature, music, astrophysics, mathematics, the natural world, and anything else that caught her interest. Right up to her death, a conversation with her would easily include the mathematics of the ancient Greeks, new theories of the origins of the cosmos, and the history of the feminine divine. She had devoted her life to music, but later said she might just as happily have been a physicist, a discipline she enjoyed exploring after her retirement.

She is survived by her eight children: Katherine, Mar, Thomas, Sarah, John, Jacob, Michael, and David Pollock, and partners Sharon Pollock (Thomas), Asbjørn Moseidjord (Sarah), Eva Wax (Jacob), and Anabel Adler (David); and her thirteen grandchildren and two great-grandchildren (with a third on the way). Her ashes will be scattered in the Salish Sea in front of the cabin, where generations of her family’s spirits already abide.

Her family wishes to extend deep gratitude to the kind and generous women who helped care for and befriended Urashan in her final years: Julia Tewksbury, Janie Pulsifer, Jennifer Lesko, and Kate Poss. Additionally, we are grateful to her nearby neighbors, Bob and Christine Schoeler, Bob and Cheryl Drewel, Andy and Maggie Holloway, and Cory and Gary Stubbs. Their watchful and kind attention enabled her to live out her days as she dreamed of doing, in solitude in her cedar house on the beach, governed only by the tides and the movements of the sun and moon and stars.

“How I planned it wasn’t even close to as good as what I got. I am not at all what I started out to be,” Urashan wrote in her book. “Every moment is an epiphany.”