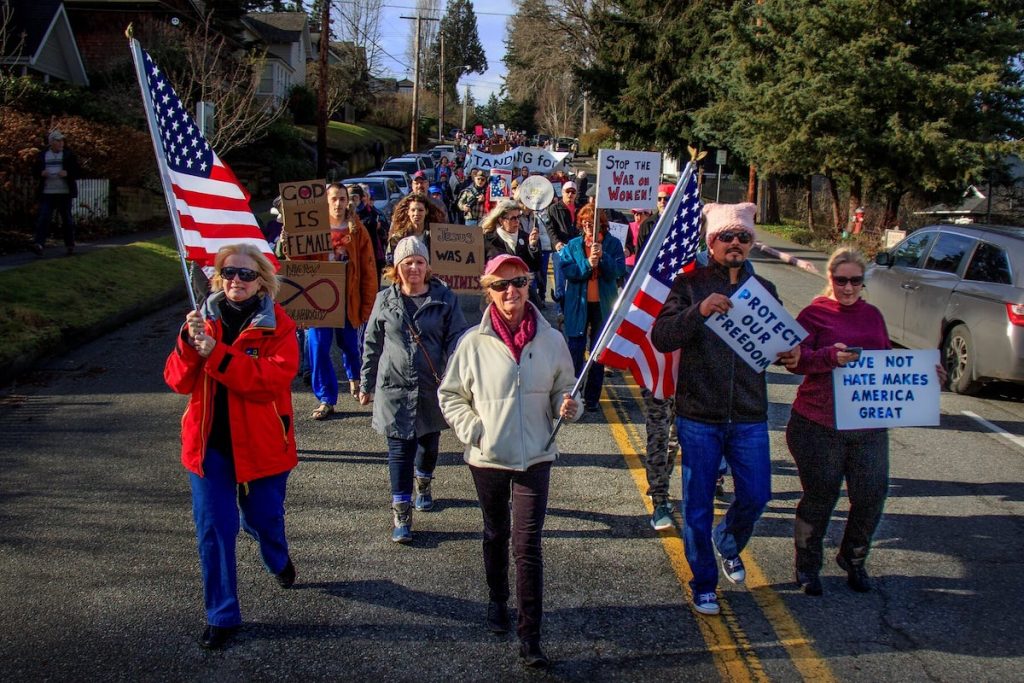 Hundreds took to the streets in Langley on Jan 21, 2017, part of millions who protested internationally in the 2017 March for Women. Four years later Kamala Harris was elected vice president. President Joe Biden and Kamala Harris spoke of democracy's survival and need for national unity throughout their campaign, as well as at the Jan. 20, 2021 inauguration

Friends and neighbors I talked with told me they had tears in their eyes following the historic and healing message from the Jan. 20, 2021 inauguration of President Joe Biden and Vice President Kamala Harris. The new White House leaders called for unity to face together the pandemic, extreme mendacity, polarization, economic hardship, natural disasters, and a failed coup on the Capitol Jan. 6.

I checked in with some locals I know and asked about what they would be doing for this year’s inauguration.

Pat McVay is a popular wood artist, whose work is seen in Mukilteo at the Red Cup restaurant, at the entrance to Whidbey Island at the Clinton ferry, the Maxwelton Outdoor Classroom, around Langley, the Price Sculpture Park, and in many places beyond.

“Because of the virus we are staying home, hoping for peace,” Pat wrote in an email.

“We will be cooking and doing chores while we watch and listen to the ceremonies and speeches on the media—looking forward to a better year and hoping for a pretty much United States someday!”

And Jim Freeman, Whidbey’s ‘Conductor of Fun,’ and comedic columnist for ‘On Track,’ published in Whidbey Weekly, sent an email, writing, “Thanks for asking. If it fits, I will wear my Marine Corps dress blues uniform while marching around the caboose humming the Washington Post March!”

I Googled the tune on Youtube. The Marine Band has performed at every presidential inauguration since Thomas Jefferson’s swearing in March 4, 1801. The song is also known as ‘Washington’s Grand March,’ and was composed by John Philip Sousa and completed in 1889 under the title Semper fidelis — Always faithful — the motto of the U.S. Marine Corp.

Lady Gaga’s rendition of the Star Spangled Banner, and her emphasis on the ‘flag was still there,’ was a reminder of the Capitol siege two weeks ago and the resiliency of democracy to withstand attacks. Jennifer Lopez’s singing This Land is Your Land/America the Beautiful felt like a tribute to ALL the people in our country; and Garth Brooks’ Amazing Grace acted as a balm to our battered psyche.

From Facebook posts to conversations with friends, the grace and power of Amanda Gorman, America’s first National Youth Poet Laureate, deeply inspired us. Wearing a brilliant yellow coat, a red band in her crown of braids, the Harvard graduate, who has an auditory processing disorder, stood and held us spellbound with her inaugural poem, The Hill We Climb. I read it again and again, and include this excerpt inviting us to be our better selves:

“We will not march back to what was but move to what shall be/A country that is bruised but whole, benevolent but bold, fierce and free/We will not be turned around or interrupted by intimidation because we know our inaction and inertia will be the inheritance of the next generation/Our blunders become their burdens/But one thing is certain: If we merge mercy with might, and might with right, then love becomes our legacy and change our children’s birthright/So let us leave behind a country better than the one we were left with”

After taking the oath of office from an old family bible held by First Lady Jill Biden, President Joe Biden delivered an earnest and down-to-earth speech for Americans. Here is a short excerpt:

“This is democracy’s day. A day of history and hope. Of renewal and resolve. Through a crucible for the ages America has been tested anew and America has risen to the challenge. Today, we celebrate the triumph not of a candidate, but of a cause, the cause of democracy. The will of the people has been heard and the will of the people has been heeded. We have learned again that democracy is precious. Democracy is fragile. And at this hour, my friends, democracy has prevailed. So now, on this hallowed ground where just days ago violence sought to shake this Capitol’s very foundation, we come together as one nation, under God, indivisible, to carry out the peaceful transfer of power as we have for more than two centuries. We look ahead in our uniquely American way — restless, bold, optimistic — and set our sights on the nation we know we can be and we must be.”

Celebrating America closed the evening with virtual tributes to a rainbow of people and cultures and musical styles—Americans — military bands, cloggers, drill teams, hula dancers, Native Americans, rappers, Bon Jovi, Anthony Gaskin, a UPS driver from Midlothian, VA; Bruce Springsteen, and 13-year-old Brayden Harrington, who recited a famous portion of JFK’s 1961 speech: “Ask not what your country can do for you — ask what you can do for your country.” President Biden, bonded with the young man nearly a year ago at a campaign stop in New Hampshire. Each has a problem with stuttering. “Don’t let it define you,” Joe Biden told Brayden then.

“When I learned I had the opportunity to speak at the Democratic National Convention, I was so nervous!” Brayden said in a statement quoted in the New York Times. “What got me through and helped motivate me was knowing I could be a voice for other children who stutter as well as anyone else who has faced challenges. I only hope my story provides a little extra support and motivation for those that need it.”

Meanwhile, reflecting back on the 2017 Inauguration, what stands out for me was the beginning of the Me Too Movement when millions took to the streets to have their voices heard. The 2017 Women’s March on January 21, 2017, was the largest protest in history, taking issue with the exploitation of women as the main theme. During the four years of Trump’s presidency, a number of progressive thinkers have since been elected, promoting honest and fair elections, addressing climate change, bringing integrity to the government, empowering women, supporting Black Lives Matter, and other challenges our country faces. The peaceful post-inauguration march four years ago was in stark contrast to the the mob that stormed the Capitol Jan. 6, 2021.

Following the election of President Trump in 2016, Diane Jhueck, founder of POWER — People of Whidbey Elegantly Resisting — decided to do something. She joined nearly 60,000 mental health care workers in signing a petition declaring President Trump mentally unsuitable for office. “I just started doing everything I could from the day after he was elected,” Diane wrote in a Messenger post.  Later, she would organize locals to attend the 2017 Women’s March in Seattle. “They have an official count: 175,000,” Diane posted following the march. “The fact that many people can come together without incident and just be a loving presence…Holy Smoke. I asked four police officers just outside the Seattle Center how the march had been for them and they all smiled, one exclaiming: ‘Wonderful!’

“The Women’s March saw millions of people marching globally. At the time the largest protest march in human history. POWER took 4 bus loads (200 people) to Seattle. Bernita Sanstad organized the march in Langley. Which, I believe, had a turnout larger than the town itself (1,319 in 2017). Another thing of note: that many protesters and no violence or arrests anywhere that I heard of. I saw the whole thing as a day of grace where we were all given a moment in time to see how the world could be. Law enforcement posed with us and even borrowed our Pussy Hats for photos. The only counter-protest I saw was two different elderly white men standing facing the crowd in the middle of the street as we moved like a huge river around and past them. Two eagles flew around above us, in downtown Seattle, on that sunny January day.”

Three women in my swim group, The Rosy Hypothermias, marched in Seattle that sunny day, Jan. 21, 2017. They told me they felt empowered by the unity of spirit.

We met for a swim on Inauguration Day 2021, our spirits lifted with the days’ message of unity and hope. We waded through wood debris as we entered the 44-degree water. When we exited, the debris had floated away—a metaphor for the debris of the past four years—and the cleared path we see at this point in history.

Meanwhile, This is Whidbey’s photographer David Welton, who covered the 2017 Women’s March, and 2013 right to vote parade, commemorating a women’s march in 1913 asking for the right to vote, adds: “This year at a town hall meeting in place of the second debate, President Trump was asked what was great about America. He gave a typically incoherent response. I would have said, ‘The capacity to grow, change and always get better.’

“We do not stay stuck in the past. From chattel slavery to the thirteenth amendment –which abolished slavery–to Barack Obama’s election and now Kamala Harris as vice president, America actually led the world and fought a bloody civil war to abolish slavery and get us to where we are now. It took 80 years for the women’s suffrage movement to pass the nineteenth amendment in 1920. The celebration, pictured above of May 11, 2013, and Women’s March in 2017 compares and contrasts these changes we have experienced. Progress takes time, but things are better today than they were a few years ago or even yesterday morning!”

A model for workforce housing