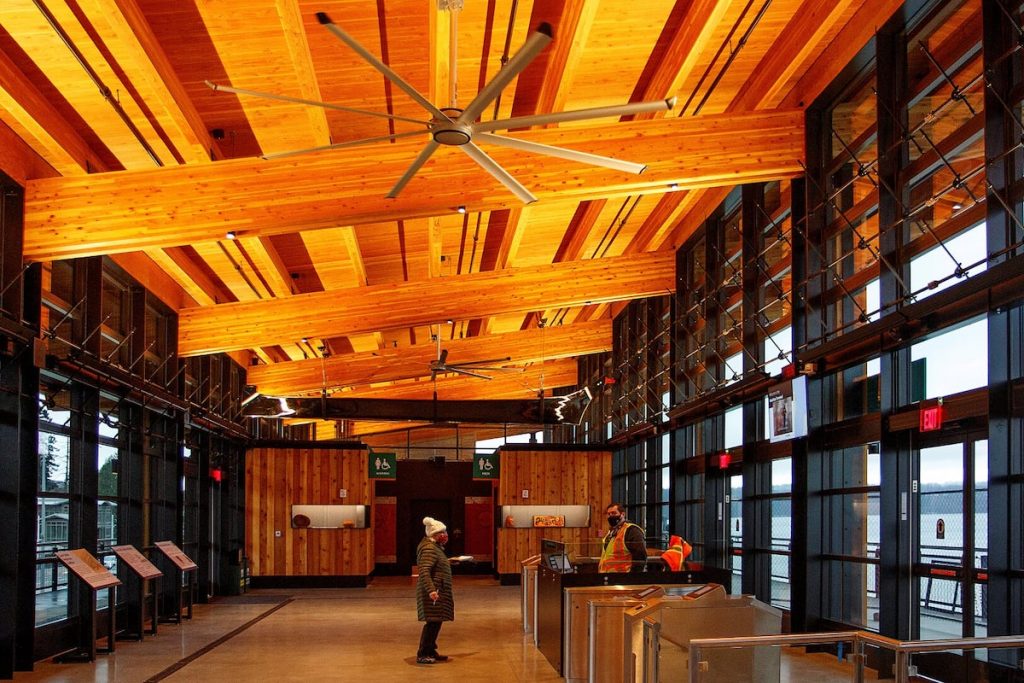 From signing their land away on January 22, 1855, to collaborating on design for a welcoming port at the Mukilteo Ferry, our state’s Coast Salish people are now being honored for their gifts.

After 63 years, an aging bridge and nondescript beige ferry buildings in Mukilteo have given way to beautiful Coast Salish-style architecture depicting a deep spiritual alliance with the natural world. The new ferry terminal occupies land where tribes once signed the Point Elliott Treaty in 1855, ceding their ancestral lands for life on reservations. Here are links to the treaty from the Tulalip tribes, the Suquamish and the Duwamish people. South Whidbey Island was once home to the Snohomish people, who were relocated to the Tulalip reservation following passage of the treaty.

WSDOT Tribal Liaison Phillip D. Narte played drum on Tuesday, Dec. 29, the first night the new multimodal ferry terminal opened and welcomed visitors. He explained his role in shaping how the ferry renovation evolved from what it was to the welcoming new space it is now:

“I was hired as the Tribal Liaison for the Washington State Department of Transportation Ferries Division (WSF) because the Treaty Tribes were not in favor of the Mukilteo Multimodal Ferry Terminal being built there. A condition of the federal funding for the project meant that WSF was required to follow the requirements of the National Historic Preservation Act of 1966. This law states that Tribal governments that have a cultural tie to an area must be consulted with. Because the location of the treaty signing is very culturally significant to these tribes their stance in 2008 was to not build there.

“The project was put on pause and almost shelved. In 2009 WSF reinitiated the project. All of the designs that had been developed prior to this date were scrapped and consultation with the tribes began anew. WSF went back to the tribes with a new ask: how could the state and the tribes work together in a project that we could both be proud of?

“The tribes replied; whatever is built there should honor the treaty signing site and WSF should hire tribal artists to help adorn the facility.

“The tribes had also stated that nowhere in the State of Washington is there a place that honors the tribes for their immense gift of land in the treaty.  And people in the state do not know this history. The new Mukilteo ferry terminal is a monument to the tribal people and is adorned with cultural design motifs and the Lushootseed language where possible. The tribes hoped that the traveling public would recognize that the Mukilteo Multimodal Ferry Terminal is a special place adorned with items that highlight their vibrant living culture.”

Meanwhile, the terminal’s art inside and out “are more than simple decoration to native tribes,” according to an interpretive board inside the terminal honoring Coastal Salish artists whose wood carvings and glass panels depict connection with the natural world. “They possess spiritual power. Every salmon, orca, eagle, crab image evokes multiple legends, stories, songs, dances, and other cultural patterns that explain the universe and the role of people within it.”

Standing on the deck of a Mukilteo-bound ferry last week, I felt the spiritual power of the art welcoming us. Multi-story glass panels on either side of the terminal — built in the style of a Salish tribal longhouse — depict orcas, ghost images of two tribal elders, and other symbols.

Artist James Madison, who designed the functional art, which frames the ferry terminal elevators and welcomes visitors traveling from Whidbey Island, began carving when he was eight years old.

“We’re not petrified, we’re still alive,” James quoting his grandfather, Frank Madison, said in an interview with the Tulalip News, The Tulalip News also noted: “That is the message Madison wishes to convey to the next generation of Native youth, keep us alive.”

“James was so up for the challenge,” said Diane Rhodes, lead communications and press contact for WSDOT’s ferry upgrade. Diane said she is a history nerd with a keen interest in our local Native American culture, and author of the interpretive boards inside the new ferry terminal. “The elevators needed to be specially designed for accommodating the glass. Typically elevators don’t have glass. But it’s a good way to pay tribute to the tribes.”

Diane said the elevators are expected to be operational in a few weeks. “We thought the elevators would be working on opening day,” she added. “The State L & I (Labor & Industries) asked for additional safety features. We couldn’t get it done in time.”

“He began carving out of necessity, making tools needed for daily life,” Diane wrote in a WSDOT blog article from October 2019. “From watching his father, a master carver, he learned the cuts and techniques that would lead him to become a master carver in his own right with a long and storied career. For Tulalip master carver Joe Gobin, his work has, in many ways, swung back around to necessity as a force for keeping his tribe’s stories and its rich Lushootseed language alive.

“As he grew in skill, his work grew in size to 30-foot story poles, ornate doors, canoes, and other works on display at museums and studied by others. Still an angler and a carver with multiple commissioned works to his name, Gobin resists the title master carver. ‘I learn from others every day,’ he said.’”

Meanwhile, Joe Gobin’s red aluminum spindle whorls are seen on the outer east and west sides of the ferry terminal. A spindle whorl is traditionally used to spin wool into yarn.

An eight-foot diameter cedar spindle whorl, inside on the west wall, depicts a man holding tails of two salmon, surrounded by a pair of orcas. The red outer ring depicts water, key to Tulalip life and art. Joe Gobin carved the male and female figures that stand outside the terminal’s restrooms as well. A working canoe made by him is suspended from the ceiling.

Honoring the culture of our Coast Salish people figured in when talk of renovating the aging, seismically vulnerable ferry terminal began. Diane Rhodes said the work involved collaboration from a number of agencies and people, including the local tribes, Port of Everett, the U.S. Air Force, the City of Mukilteo, NOAA, Senator Patty Murray, and the leadership of Nicole McIntosh, now chief of staff for WSDOT ferries.

“It’s amazing what people can do when they cooperate and do not compete with each other,” Diane said. “Nicole McIntosh, was a young project engineer, now chief of staff at the ferries. As she moved up the ranks, her continued influence brought in tribal liaisons. She wouldn’t let us build unless we honored the tribes.”

“Charlie was instrumental in presenting design concepts to the tribes,” Diane added. We worked with LMN architects. The design is inspired by a tribal longhouse. A model was built and bundled up and shown to tribes. Once they realized it was built on a longhouse concept, they were pretty excited.”

“The land was once tribal land. Native plantings, important to tribal life, will fill the grounds where signs will describe their native importance and their Lushootseed  names.”

In a May 2019 WSDOT blog article Diane Rhodes notes the cost and scope of renovating the ferry: $187.3 million dollars in federal and state funding, including the vehicle transfer bridge, overhead pedestrian walkway, structures needed to land the ferry along with demolishing the old ferry terminal and nearby fishing pier and building a new fishing pier.

Due to COVID-19-related delays, the proposed passenger loading dock is now planned to be installed next month, Diane added. Passengers now enter the ferry via the car deck.

The former ferry terminal, parking lot and booths, have begun demolition. A temporary road will be used to access the new terminal. A new entrance will eventually lead through where the former toll booths used to stand.

“The tribes asked us to be welcoming from the land and water,” Diane added. “There are welcome whales and welcoming figures. We were asked to be light on the earth, not taking any more than you need to replenish.

“It’s a LEED-certified project,” Diane added, in regards to the project’s directive to be light on the earth. “The project is equipped with solar panels, which generate power. There is rainwater reclamation. Go into the passenger building. The standup counter where you plug in your laptop is a piece of wood reclaimed from the former Air Force’s wood pier. We looked at the pier, which had been in place for so long and spotted wood that wasn’t creosote-soaked. It has earned a home inside the passenger terminal.”

Diane talked about other collaborations that resulted in a new, visitor-friendly waterfront for the City of Mukilteo, which works with the Port of Everett.

“First it was tribal land, then a lumber mill that employed Japanese workers. The U.S. Air Force once had a fueling station there, ten fuel tank pads and a huge fueling pier that went into water. It was abandoned after the Cold War. Senator Patty Murray was instrumental in getting that land to the Port of Everett to us. It took decades. We have that fishing pier at the new terminal. We’re building it, but it belongs to the Port.”

The ferry project is one part of a larger redevelopment plan for Mukilteo’s waterfront, which will include a replacement of the nearby NOAA research station, improved beach and trail access, the addition of mixed-use buildings, and more.

In the mean time, the new Mukilteo terminal is a model for what can result from the spirit of collaboration, connecting us all to what is important.

Check out KING 5’s coverage of the ferry here. The news station will feature shots of the new ferry terminal as a backdrop for its evening magazine show.

Wonder about the Mukilteo landmark Ivars-Mukilteo Landing now a third of the mile away at the former ferry site? Read about its plans to keep your tastebuds happy here.

This is Whidbey’s David Welton has taken a number of excellent photos of the new ferry terminal that are worth noting. Visit his Facebook Page to see more.

And, if you have photos and/or stories to share from your previous ferry route experiences, please send them to thisiswhidbey@whidbey.com. We will run a story reminiscing the days before…