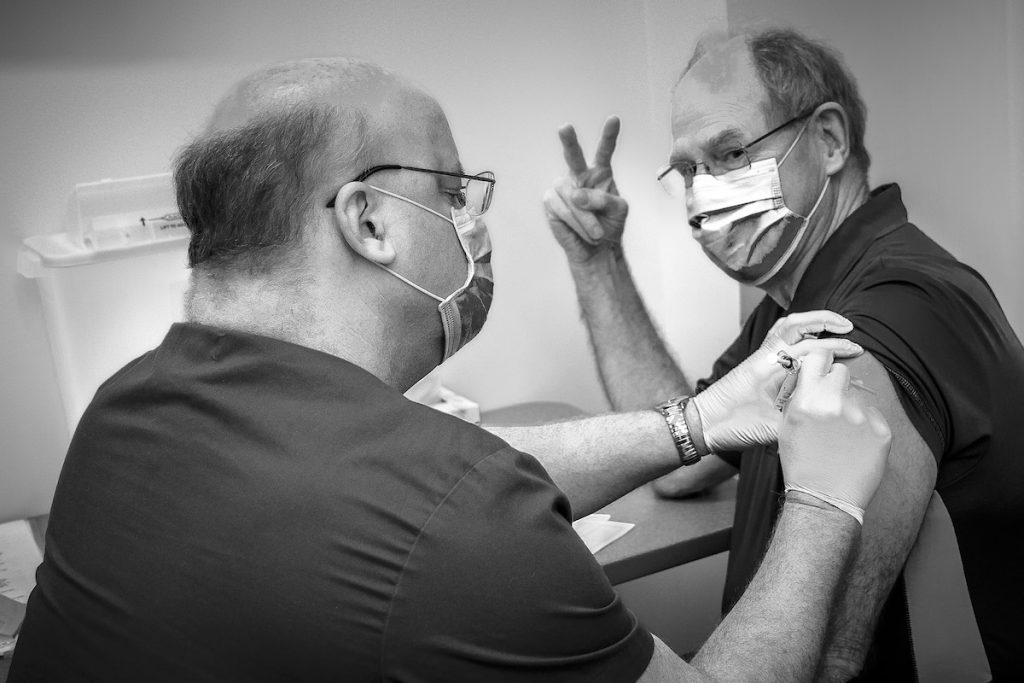 David Welton, flashes a victory sign after getting a COVID-19 vaccination from Andrew Barber, RN, a WHMC employee volunteering on his day off. Photo taken by Georgia Edwards

COVID-19 vaccinations have begun for those meeting the requirements of  Phase 1A in Island County since Dec. 17.

Washington State’s Department of Health notes who is eligible for the vaccine in Phase 1A:

DOH will release a web tool in early January to help people identify their phase and where and when they can get vaccinated.

Meanwhile, This is Whidbey’s photographer, David Welton and his wife Georgia Edwards, were each vaccinated Dec. 28. The retired physicians have volunteered to administer vaccines at the Whidbey Health hospital beginning Jan. 14. The couple will receive their booster vaccine Jan. 17.

In a phone call Dec. 29, David described the experience: “You drive in. Signs are well-marked. Drive to the back. Wait at the curb until your appointed time. Vaccinations occur every 15 minutes, with four vaccine stations. We were asked for our ID, proof that you’re a Phase 1A provider, a vaccinator, healthcare worker, or first responder. We got our temperature checked by a device on our forehead. Then we were sent directly to a vaccine station. Much of the staff, I think, are volunteers. Our vaccinator Andrew Barber, is an RN, who works full-time at the hospital, but is volunteering for this shift. We filled out a bunch of paperwork. We rolled our sleeve and got a shot.

“After we were vaccinated, we went to a little recovery area. After 15 minutes we followed the green signs outside so we didn’t interact with people coming in. The hospital has done everything they could do to keep it safe. Today Georgia and I have a little discomfort in our left deltoid muscle, which is a little sore when raising our arm above our head. No fever. We walked our dog Leda, today in Langley.”

Outgoing Island County Commissioner Helen Price Johnson emailed a press release noting that as of Dec. 28, there are 882 confirmed COVID-19 cases and 21 deaths in Island County. The release noted that Island County will issue bi-weekly COVID-19 notices starting this week.

The press release states: “Currently, Island County Public Health is not administering the vaccine and there is not a waitlist system for upcoming phases. When we have more information about moving into the next phase (1b) we will release this broadly to the community. Patience is the key right now.”

At a Dec. 16 virtual town hall meeting hosted by Whidbey Health, Island County, Langley and Coupeville mayors, roll-out of the vaccine was discussed. At present, the Pfizer vaccine is being administered, which requires storage at a freezing rate between -112° and – 76°. Proactive use of CARES Act funding paid for the freezers to store the vaccine.

Dawn Spilsbury Pucci is the Lead Island County Vaccine Planner and spoke at the Zoom town hall meeting, in which more than 100 citizens were present.

“Two things I know. The information is changing unbelievably fast. People have a lot of questions. It’s like air traffic control. Island County Dept. of Emergency Management resourced the equipment and the freezers live at Whidbey Health (hospital). Our vaccine is there. We are coordinating community volunteers.

“Whidbey  Health manages administration of the first phase of the vaccine. Pharmacies are another huge chunk (for the later phases of giving the vaccine) — Rite Aid, Safeway, Walmart and Walgreens. We are helping other providers get enrollment paperwork done. This is where the majority of the population will get their vaccines.

“We don’t have enough vaccine for everyone (yet). We are in Phase 1A — The federal government develops recommendations on who gets vaccines when. We are not making the decisions. We expect a lot more vaccines will be available before Phase 1B in mid-January.”

Later Dawn said, in the first week of vaccinations, including Christmas week, there have been 54,000 vaccinations administered in the state of Washington. Washington State’s population in 2020 is estimated at 7.7 million people.

Erin Wooley, Whidbey Health’s chief nursing officer, is a member of the leadership team in administering the first round of vaccines.

“I feel this is the light at what was a dark tunnel,” Erin said at the Dec. 16 town hall meeting. The sooner we get the vaccine into arms, the better. This is one of the most massive undertakings of my career. We received 975 doses (of the Pfizer vaccine) in 195 vials. We have these two beautiful ultra-cold freezers thanks to the Dept. of Emergency Management.”

Supplies of the vaccine are still limited. For more information on expected vaccination delivery, check out this link: When vaccine is limited, who gets vaccinated first?

David Welton, a retired cardiologist, researched vaccinations and has written:

Vaccination even in its early primitive form has prevented  suffering and the ravages of infectious disease. “Variolation,” rubbing smallpox scabs on a tiny skin scratch, was practiced in China during the 15th century and led to a milder case than airborne infection and produced acquired immunity. Edward Jenner in 1798 demonstrated that inoculation with similar, but less toxic cowpox, protected from smallpox. A hundred years later, Sir Almroth E. Wright demonstrated that vaccination with killed Salmonella enterica prevented typhoid fever and that whole live organism vaccinations were no longer necessary. We are all familiar with killed whole-virus polio vaccines, introduced in the 1950s.

Vaccinology has evolved and now we have safe vaccines effective against many pathogens.   Toxoids, derived from the chemically-altered toxins produced by infectious bacteria, do not cause disease and are also immunogenic. Tetanus toxoid vaccinations developed in 1924 and were widely used in World War 2.  Even small viral sub-unit particles, for example, from influenza and hepatitis B, provoke an immune response. Certain diseases have been eradicated and millions have been protected by vaccine programs developed by the CDC and the World Health Organization.

We now have mRNA vaccines for Covid-19. Development of mRNA vaccines has been ongoing since 2002, in response to the threatened SARS and MERS pandemics. The genetic code of the coronavirus has been broken, and the DNA sequence of the “spike protein” that allows the virus to enter a host cell has been described. The spike is assembled by the replicating virus according to the plan encoded on messenger RNA. Messenger RNA is a mirror image of DNA, but chemically different, as uracil replaces thymine.

Drug companies have learned to manufacture the mRNA for the spike protein. This synthesized mRNA contains less than 15% of the nucleotides present in the whole virus. When the mRNA vaccine is injected intramuscularly, the spike protein is made, the body produces antibodies, and immunity follows. RNA cannot enter the DNA-containing cell nucleus, and represent only a fragment of the entire virus.  mRNA vaccines for these reasons are inherently safer than legacy vaccines.

Furthermore, m-RNA vaccines are easier to manufacture than attenuated or subunit vaccines which require the virus to be grown and harvested from egg media. Although viruses mutate, the spike protein likely is common to most and there is good reason to be optimistic that these new vaccines will have broad coverage.  They have been researched and developed for nearly 20 years, long before “Operation Warp Speed.”

Whidbey Health Medical Center wisely acquired ultra-cold freezers to store the Pfizer vaccine and went to the head of the line to receive it. The Whidbey Health Vaccine Clinic has been vaccinating medical staff, community first responders and volunteer vaccinators since December 17, after the Pfizer vaccine was approved for emergency use. The clinic is in an isolated building on the hospital campus. No one but patients, providers, staff and certified visitors can enter the main hospital, Vaccine recipients are pre-registered and scheduled every fifteen minutes at four stations to ensure social distancing, and must wear masks, hand-sanitize and have temperature checked when they enter.  They are monitored for an allergic response in a large meeting room staffed with doctors nurses and EMTs. The Emergency Room is immediately available if needed.  Whidbey Health Medical Center has done everything possible to safely and methodically lay the foundation for more generalized immunization later this Winter and Spring.  Widespread vaccination not only protects the recipients but enhances community health through herd immunity and may ultimately banish COVID.

On a personal note for David: his Uncle Greg Welton, aged 91.5, is in hospice, dying of COVID-19 complications at a Palm Springs nursing home.

“I talked with him recently,” said David. “A nurse said he was better from the day before when he was incoherent. He is on oxygen, eating ice cream, drinking Coke, and other liquids. After he talked with me, he called three of his kids. We’ve given him our support and love. He has a heart condition.

“He liked to sneak out since COVID hit in March, for which he was quarantined in his room for two weeks after, for martinis and steak. He was a really good football player with the University of Redlands and offered a position with the (Los Angeles) Rams. He declined, because the pay wasn’t that good.

He once played at the Rose Bowl against Cal Tech. He knew I was at the game with my parents. He came up into into the stands with his helmet and cleats on. He said, ‘Hi, David,’ and it scared me because he looked like a giant. I hid behind my mother’s dress. He was like a grandfather to our son. My wife was close to his wife Marlene, who passed away after 39 years of marriage to Greg. I saw him two years ago. I was in the Los Angeles area. I called and asked if he wanted to have dinner. He was thrilled. He is very sharp. He said we’ll have to see what happens. I think he’s resigned and I’m sure when he went on hospice, he gave input to that decision. Based on a conversation he had with doctors. He doesn’t regret the martinis.”

David shared his opinion on getting vaccinated: “I feel that everybody needs to step up to solve this problem.  I have an active medical license and can give IM injections. Fighting Coronovirus is analagous to the evacuation of Dunkirk by “the little boats” In WW II.  American women grew “Victory Gardens” and Rosie the Riveter built airplanes.  Everyone needs to pitch in and do their part by wearing masks, maintaining a social distance, hand sanitizing, AND getting vaccinated, unless medically contraindicated.  Widespread vaccination will lead to herd immunity and defeat this pandemic.  m-RNA vaccines have been investigated for nearly 20 years and are different from legacy vaccines. They’re safer and approved by many expert sub-committees who have  nothing to do with the president. The technology goes back 20 years. We need herd immunity.  There are presently no plans for community-wide drive-through or other broad based vaccine clinics, but Dawn Pucci tells me that the Island County Health department is monitoring the pace of vaccinations and will step forward if pharmacies and health care providers appear overwhelmed by the demand.”

There are a number of resources on Island County’s COVID-19 help page, including help for the homeless and those in need of food. Please visit and click on its links. And visit Whidbey Health’s Community Update website here.

The power of swimming in open water