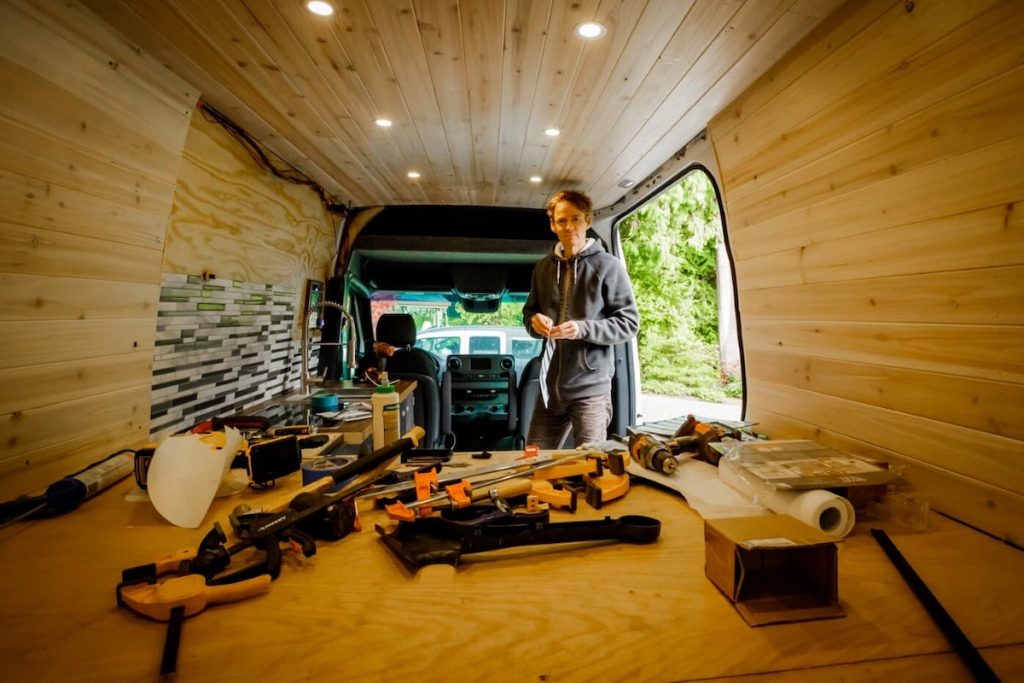 What can you do in two weeks’ time?

Nathan Welton, the son of This is Whidbey’s photographer David Welton, spent the past two weeks on Whidbey with his dad and mom, Georgia Edwards. While here, Nathan and his dad transformed a bare-bones Sprinter van into a luxurious cedar-paneled camper equipped with smart technology.

Nathan is a professional photographer and Airbnb property manager based in Estes Park Colorado. After care taking an off-grid cabin this summer, Nathan decided to build a small solar powered home on wheels. Lacking space in which to do this project, he thought of his parents’ garage and traveled west, during which time a devastating fire hit nearby Rocky Mountain National Park, resulting in evacuation of his town. He said his home was spared and a foot of snow fell in the aftermath.

Citing climate change and its link to more severe wildfires and hurricanes, Nathan, now in his forties, talked about ways to live that are easier on the planet.

“I have a newfound interest in sustainable homes,” he said. “I’ve been living in an off–the-grid cabin the past couple of months. I can actually build sustainable Airbnb tiny homes. I want to create homes I can rent out. Renters can realize living in a net-zero home is actually cool. That is my long-term goal.”

In the here and now, Nathan, with the help of his dad, designed and built a custom camping vehicle. It is a stepping stone toward eco-minded travel and conservation of energy and water.

“It’s an irony with an 8,000 pound diesel vehicle,” Nathan added. “How do you reconcile a van that burns fossil fuels? Yes, it might seem hypocritical. Yet, it helps me think that what I’m doing is a start. I’m a rock climber and I’m pretty happy living in the dirt and prefer it much of the time. My build was to demonstrate to myself a proof of concept and to see how to cram an entire home into a small space.

“As our world warms, travel is still important. My vehicle has a brain. It tells me if the water tank needs refilling. It’s eye opening—once you watch your water levels. I can quickly see how much water it takes to do the dishes— a half gallon. Living with a water monitor helps you be more mindful. I have solar panels on the roof. I can see how much power comes from the sun. If I run the alternator I can see how much electricity is coming from the car.”

David noted the van gets nearly 20 mpg on the highway while typical big motorhomes average 6 to 10 mph. He recalled, “My dad’s Chrysler Imperial only got 7 mpg.”

The van is now lined with tongue-and-groove cedar, and cedar plywood, giving it a cabin-y feel. A 15 lb. propane tank runs hot water and the stove. Heating the van during cold weather requires hardly any fuel with the van’s efficient heater. Solar panels fuel lithium car batteries for the fridge. Solar panels can also run the water pump, as well as lighting and electrical outlets. Noting the energy savings from using solar panels—Nathan installed two at $175 each—“the carbon payback period is a year-and-a half on modern solar panels. For the next 28.5 years they generate more than they cost to make.” Nathan installed a Camplux water heater and a 30 gallon-water tank. Insulation between the van’s metal exterior and wood interior is sheep wool, which also acts as a sound dampener.

“Ideally I’d be driving an electric vehicle that is charged by wind power.” Nathan added. “For this project I learned to design an electrical system and monitor how little water and electricity you need; how easy it is to live in a small space. It’s a learning journey. I use two lithium car batteries. I can go somewhere where it’s sunny and be self-sustained forever with solar. If it’s like this—typical Pacific Northwest overcast—I can go four to seven days before needing juice. Then I can plug in.”

David added that he hadn’t spent this much time with Nathan in quite a while and enjoyed the camaraderie with his only son.

“We haven’t spent that much time since his high school or summer after college,” David recalled. “This has been great. Really fun for both of us. We actually work together pretty well. I’ve had some ideas, but mostly I’ve done grunt work. Painting and holding things. A lot of problem solving. No manual. We had to solve problems and design on the fly.”

An example of designing on the fly was to create back-door templates out of cardboard in order to fabricate a pattern for the wood siding. The left door was not a mirror image of the right, for instance.

Now that the work is winding down, Nathan said, “Anyone can do this. It’s a cool project. Before I came out here. I plumbed the electric and installed the cabinets, sink and stove. We did the detail work here. I installed a ramp. We got the wall panels in. The finish work takes forever. In terms of total hours, I’ve been puttering since early August.”

With his new custom camper, Nathan is chasing a dream of becoming independent of fossil fuel energy as much as possible.

“In Estes Park half of our energy comes from Wyoming coal,” Nathan said. “I think it is shameful. If you stay at home, you can tell how much electric is running through outdated and inefficient baseboard heaters. Do the math. You can estimate how much coal you use to keep you toasty. If there was that kind of transparency you would be mindful.

“The van is an unnecessary extravagance,” Nathan added, “but it’s also a fun, interesting and engaging learning tool that has helped me move along toward a particular goal, which is to hopefully build tiny, off-grid, net-zero homes that people can vacation in, and that might inspire them to be less consumptive while traveling and also while at home.”

The U.S. Energy Information Administration webpage shows graphics on energy consumption and where it comes from.

After spending 90 minutes talking to Nathan, I am inspired to lessen my carbon footprint. Find out more by checking out the Green New Deal.

Our reader’s ferry memories and comments