The night sky and a solution to light pollution 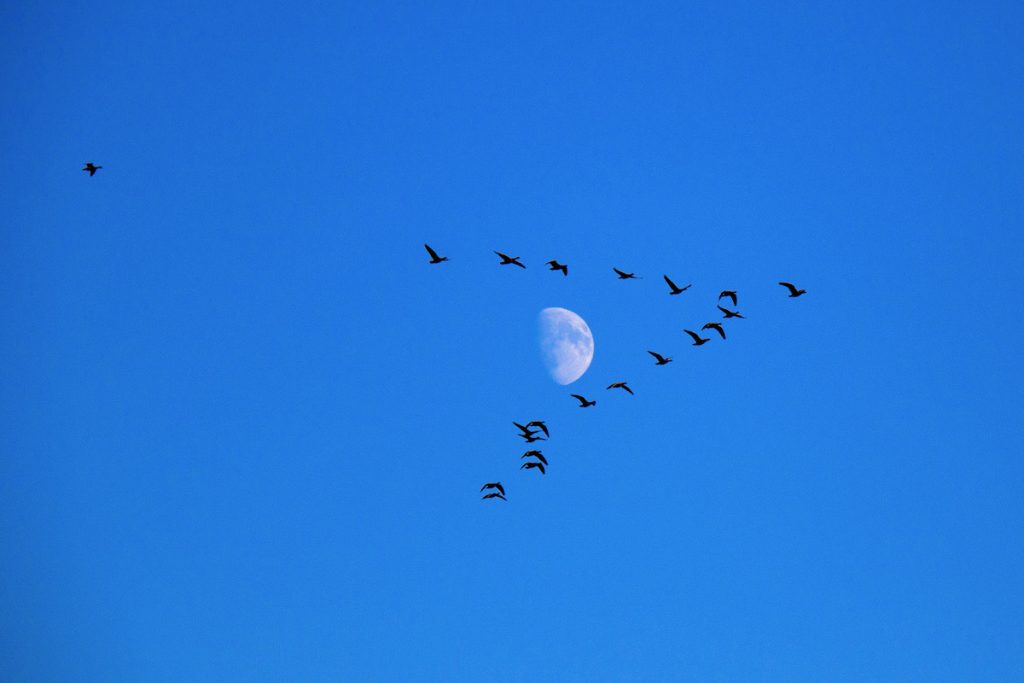 Skein of migrating Canadian geese framed by the moon. Migrating birds are affected by light pollution.

On the next clear night, walk outside and look up at the night sky. It’s a vanishing bit of awesome nature in the face of growing light pollution.

According to the Dark Sky website, “The inappropriate or excessive use of artificial light – known as light pollution – can have serious environmental consequences for humans, wildlife, and our climate.”

In a Lights Out request to humans on the Birdcast Info site — which runs through November 15 this year and is co-sponsored by Cornell Lab of Ornithology — real-time maps feature bird migration patterns. The site reports: “Every spring and fall, billions of birds migrate through the US, mostly under the cover of darkness. This mass movement of birds must contend with a dramatically increasing, but still largely unrecognized threat: light pollution.”

Former First Lady Laura Bush asked that Texans dim their lights this month to prevent needless bird deaths from window strikes with migrating birds blinded by the light, in which nearly a billion birds are killed each year. The Audubon Society, on its Lights Out website, asks that citizens install lights that do not add to light pollution.

Locally, Joann Quintana and her husband Joe Quintana, are advocates of preserving dark night skies. As members of the International Dark Sky Association (IDA), Joann prepared a poster and handouts, “The Value of Darkness,” for a 2019 climate change symposium as requested by Langley city councilman Peter Morton.

“I’m a local dark-sky advocate-activist, concerned about how inappropriate lighting and over-lighting is harming the planet and our quality of life, as well as worsening climate change,” Joann wrote in an email.

“At the Climate Change Conversations event November 15, we invited a number of environmental groups to exhibit during half time, and among those was Dark Skies, with Joe and Joann Quintana asked to create an exhibit,” Peter wrote in an email. “They could not attend due to a calendar conflict, so Joann provided a summary Dark Skies description and handout for people who attended. And many did. We had a full house.”

“Dark Skies principles are valuable environmental tools for homeowners, businesses, and municipalities; it deserves intensive promotion at the very least, and in my opinion, eventual incorporation into municipal codes,” Peter added.

In addition to loss of bird life due to night pollution, Joann’s “Value of Darkness” presentation also mentions how energy is wasted by inefficient use of night lighting.

“The shift to LED (lights) has NOT reduced energy consumption or light pollution — it has increased it by making lighting CHEAPER, so people are using more of it. With LEDs producing cheaper lighting, the greatest lighting increases have been in countries that produce most of their energy from coal.”

Human health is also affected by artificial light, Joann noted in the report. Her research is echoed on Dark Sky’s webpage on night light and health: “Exposure to blue light at night is particularly harmful. Unfortunately, most LEDs used for outdoor lighting — as well as computer screens, TVs, and other electronic displays — create abundant blue light.

“According to experts at Harvard Medical School, ‘If blue light does have adverse health effects, then environmental concerns, and the quest for energy-efficient lighting, could be at odds with personal health. Those curlicue compact fluorescent lightbulbs and LED lights are much more energy-efficient than the old-fashioned incandescent lightbulbs we grew up with. But they also tend to produce more blue light.’

“A 2016 American Medical Association report expressed concern about exposure to blue light from outdoor lighting and recommends shielding all light fixtures and only using lighting with 3000K color temperature and below.

“To minimize harm from blue light in your home, choose the right light bulb and download a color temperature app that adapts your electronic screen to the time of day – cool light during the day and warm light at night.”

Back to Langley, Joann recalls walking with friends at night and being blinded by the floodlights shining out at a local church.

“We went out in the rain and the church had flood lamps, two of them on either side of the door,” Joann recalled. “We were trying to get to the door. We couldn’t see the sidewalk, the flood lamps were shining right in our eyes. We were stumbling. A truly dangerous situation.

“What happens at institutional situations,”Joann added, “is they may have a custodian who says they need lights at the door. They get the brightest lights they can find. It doesn’t deter crime. I used to be married to a criminologist who explained that burglars said lights don’t deter them. The deterrent is you’re sneaking up and it’s all dark.

‘If you install a downward-facing light with a movement detector, it lights the sidewalk and you can get in the door,” Joann added. “Then it turns off. It covers all the bases. You don’t have to retrofit the light fixtures, which can be expensive. With light pollution, it is so easily solved by understanding what’s going on. Select the right lights. I think the very best thing to feel safe is to get these bulbs. They have a motion detector in the bulb. Estimated yearly energy cost is $1.49, based on being on three hours a day. The estimated life span is 20 years.”

The Dark Sky site posts links to resources for Outdoor Lighting that can be Dark Sky Friendly —using downward-pointing lights, for instance — and, Frustrated with bad lighting?

In the latter link, which lists ways we can talk with our neighbors and city officials about bad lighting, the site notes:

“Many of us have experienced this scenario: a neighbor installs a new light on their property. It’s an unshielded fixture that casts a bright light that spills onto your property and perhaps even inside your home.

“This is known as light trespass and it can cause a lot of agony and frustration. Although IDA doesn’t get involved in neighbor disputes, we have provided this resource that we hope will help you resolve your problem.

“If the nuisance lighting is from streetlights, see our Bad Streetlights webpage.

“To be fair, your neighbor may not even realize that their unshielded lighting is shining on your property, wasting energy, money and creating a safety hazard.”

“This is why this story is important now,” Joann added. “This is the time of year to think about this. If you love birds and hear them migrating, this is a wonderful time. I can’t walk on the deck without hearing geese. There’s so many birds on the island and a lot of them are migrating.

“Also, I wanted to mention that there is another angle to this, and that is eco-tourism. If South Whidbey can preserve its dark skies, it can be an attraction for people who want to visit here to see the stars. I’d also like for Langley to become Washington’s first certified dark sky community!”

Meanwhile, Joann and Joe Quintana collect art and one of their treasures is a night-sky print by artist Kim Tinuviel. Kim is a local visual artist and musician.

I talked with Kim in a phone call last week about her love of the night sky.

“I’m kind of an introvert and spend a lot of time alone,” Kim said. “Night time is a great time to be out. Photographing the aurora or the Milky Way is kind of like being in a really spiritual and quasi-religious space. You’re surrounded by limited light, which enhances all your other senses. All the other sounds come alive at night. You hear things you don’t hear during the day. Plus the sounds of humans are diminished.  It’s a time of contemplation and concentration, which so many of us lack with the busyness we have. I feel lucky to immerse myself in this and share it with others.

“Once you learn the technique of taking the photos in low light, your subject is so amazingly beautiful. It’s win-win. You feel good taking the images. There’s the aspect of sharing why the night sky is so valuable and why we need to conserve it.  A huge percentage of Americans don’t see the Milky Way or stars for that matter from where they live. It is important to show people the stars are there. If we make a small effort to reduce light pollution we can all enjoy them.

“Night lighting? Often times it is a fear thing. People want to feel safe. It is important if we feel the need to light our environment that we keep the lights pointing down. If the lights are pointing up, we are contributing to the pollution.”

Kim’s night sky print that is owned by the Quintanas is an homage to the late Stephen Hawking, a theoretical physicist who died in March 2018. He is quoted in 2016 as saying, “Pollution is the biggest threat to humanity.”

The Hawking family selected Kim’s print to be used to commemorate Stephen’s life. Kim’s set of cards contain another of his quotes: “Remember to look up at the sky, not down at your feet.”

“It was an honor for me, and my art to be chosen by Stephen’s family,” Kim said. “The important thing is protecting our night skies. I didn’t publicize the fact that his family used my image at first.  I didn’t want to benefit from his death. Now it’s two-and-a-half years since he died. The truth is I can sell the images because of that connection. I knew Joann before we got together on this image. Since she is active with darksky.org, I include that link on the back of my cards to promote their cause.”

Please take a small step to be kind to your neighbors, our night animals, and to preserve the night sky’s integrity by installing downward-facing bulbs. Become a citizen-scientist and help measure night sky pollution. Visit or join DarkSky.org.

On the Road 8 – Epilogue: Sebastopol CA to Langley WA

Functional art that goes on tour