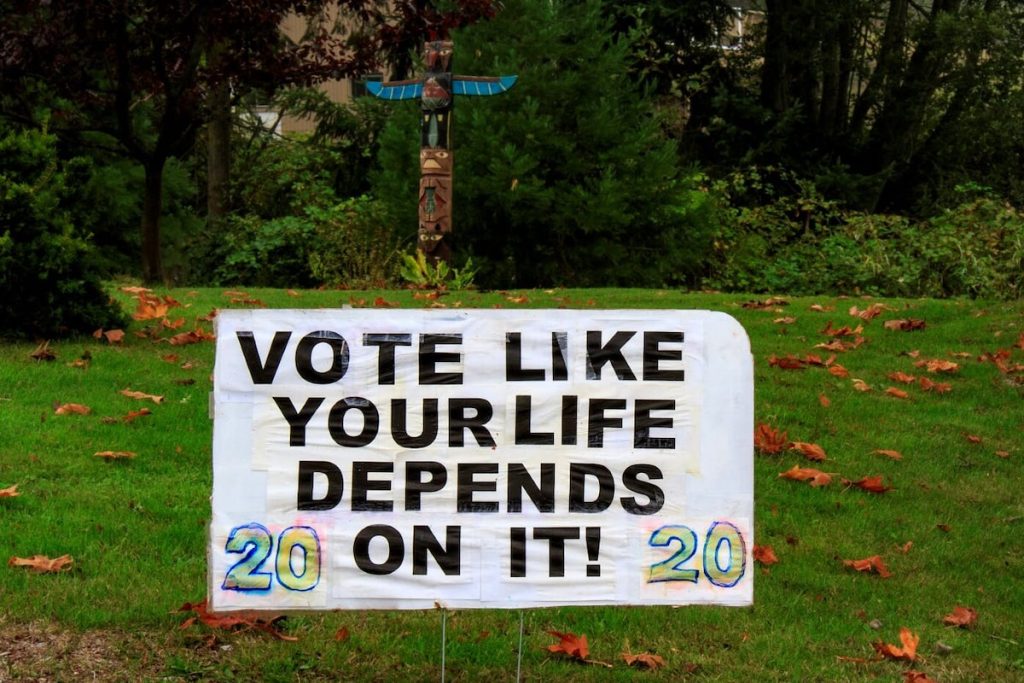 Important message for this year's election

Signs of color abound all over the island this season and political colors, in addition to the browns, reds, golds and purples of autumn leaves, are also a sign of autumn and the upcoming election November 3.

This is Whidbey’s photographer David Welton, intrigued by the island’s propensity to make public its political persuasions, suggested we do a photo essay on this annual ritual, which this year, evokes strong emotion on both sides, and hopefully results in voting in unprecedented numbers.

Island County recognizes the right to free speech and has regulations regarding posting of public signs in municipal code: ICC 17.03.180.R. Signs and outdoor lighting standards: This section regulates outdoor lighting as well the construction, erection, maintenance, illumination, type, size, number, and locations of signs in order to protect the health, safety, property, and welfare of the public as well as to protect the rural character of Island County.

Are yard signs effective? This essay, published by the University of Colorado Boulder Alumni Association, seems to think so.

“New University of Colorado Boulder research suggests that most of the time these centuries-old mainstays of political participation are actually good for democracy, providing ways to show solidarity with neighbors when we agree, and sparking (usually) civil dialogue when we disagree.

“‘Putting up a yard sign is not like posting a comment on Facebook or saying something to your colleague at work. It is a very unique act,” said Anand Sokhey, associate professor of political science and co-author of the book Politics on Display: Yard Signs and the Politicization of Social Spaces. “It is tying you and your identity and what you support to a specific place and putting it out there in a way that can be pretty confrontational.”

I phoned Island County Republican and Democratic headquarters to ask about whether yard signs really do influence votes. I also talked with individuals who have posted signs in their yards.

“If you are inclined, a person can pick up Trump-Pence signs in North Whidbey,” said a woman named Barb Armes at Oak Harbor’s Republican headquarters. “Visit this webpage for more details. We are the Republican Legislative Ten District office or LD10.  I think the reason why people post signs is they want to show support for the candidate. They want to say we believe in this candidate. We want to vote for this candidate. It’s something people have done forever. It gives them a sense of doing something. They can vote. They put out their sign. Maybe the neighbor will have a conversation. And the person can say this is what we believe and have the courage to post it publicly.

“We are having an event for Tim Hazelo (running for the Second Congressional District against incumbent Rick Larsen, a Democrat) at Windjammer Park from 2-4 today (Saturday, Oct. 10). Sign waving in front of the LD10 Oct. 17th from 11-1, and Oct. 24th from 11-2. Come and see.

“We have signs in our office at 520 E. Whidbey Avenue, Suite 207. We’re open Monday through Friday from 10 to 5. We have presidential signs and require a $5 donation. We have a variety. You want to go shopping you can go shopping. The only one requiring a donation is Trump for $5. All the rest are free.”

To purchase Republican presidential merchandise or pick up other Republican Party political signs, visit this webpage.

Joseph Busig, chair of Island County Democrats, wrote in an email: “I think political yard signs hold a variety of meanings and engender different sentiments within folks. I certainly think when done right, yard signs can be an effective strategy in getting one’s name out there. Does it get votes? Not necessarily. Yet it does put one’s name out there, quite literally, and allows for community members to recall candidates. Whether that’s in casual conversation, when looking at the voters’ guide, or marking the ballot. It can also convey what the campaign is about. Slogans, colors, designs, and fonts all impact how candidates are perceived by voters. Signs and logos essentially are the campaign’s logo or brand mark.

“Some argue that this takes away what elected office is truly about. If candidates are something to be bought and sold, displayed, and judged by their packaging by way of a logo or their own presentation, are we really discussing what’s important regarding their policy and platforms? Is it a place voters and community members want to be in when their choices for elected office are a commodity?

“When placing signs, there is a right and wrong way. Candidates and their campaigns want to make sure they are following municipal ordinances, county codes, and state law when displaying signs. If not, it can result in fines. Campaigns should also be considerate of residents and place signs sparingly while still utilizing strategic visible locations. Too many signs in one area can ruin other signs as well as the space the signs are placed. They can also result in littering our environment when not tended to regularly. Lastly, voters can view too many signs as excessive, especially if they are clustered or plastered everywhere.

“Signs encompass a duality. They convey all the positive things about what the candidate stands for. Signs also show voter, volunteer, and community excitement around that campaign. When placed in an individual’s yard or property, signs can show real constituent support. They can also show an earnest effort by the campaign that they’re serious about their race. Yet they can be overbearing, bombarding, and cause litter. It can disaffect folks from the importance of local elections because of how campaigns may portray themselves. Campaigns need a good sign that’s recognizable and describable. One that conveys an overall meaning or feeling to voters. In this balance, when a campaign dissolves into merchandised commodification and inordinate placement, they can lose their purpose in a pursuit of representing people.”

A South Island volunteer has agreed to have locals pick up Democratic Party signs at her yard, suggesting a donation of $10 to $20 for signs supporting Joe Biden and Kamala Harris.

“We have an easy to find pickup spot for campaigns to drop off and pick up signs,” said Susan Cyr. “The Biden-Harris signs are a fundraiser for Island County Democrats. We just got another hundred delivered, after distributing 117 of them already.

“Are the signs effective? I think so, if someone isn’t very politically oriented and they see a sign in the yard of a person they respect they will have an affinity for that candidate as well. It is hard to imagine but there are people who are undecided. This election is about saving democracy. We are living in perilous times.”

Interested in getting Democratic Party signs for your yard? Visit this webpage.

Perturbed by the news documenting separation of families by asylum seekers at the U.S. border a couple of years ago, and wanting to make a personal statement, South Islander Emily Schmidt began writing her thoughts on political signs that change with the times, and offer a countdown until November 3, Election Day. In September she posted just one sign and took the others down to honor the passing of Supreme Court Justice Ruth Bader Ginsburg, who died September 18 of this year.

“One day I was sitting here—I’m in the middle of the woods—and wondered what can I do?” Emily said in a phone call this week. “When they ripped families apart at the border, I did one sign on the edge of my road. My sign said ‘Reunite families.’ My dad was a brigadier general in the Army and my mom was a registered nurse. He was a Republican and she was a Democrat. We had vicious fights around the table with us seven kids.” Emily laughed recalling the memory.

“I needed to get my word out there in 2018. I wanted to make sure everyone was informed. I write so people can go look it up in the news. I am so well-informed now, it’s almost ridiculous. I post what we need is the truth, justice and the American way. When I was sick, people asked where I’d been. I want to be true to my convictions and want to walk my walk and talk my talk.”

Emily said she’s had some folks run down her signs with their vehicles in protest, and once someone dumped a pile of nails in her driveway. She said she picked the nails up and put them in the garage. She said expressing her views publicly has invited some backlash, but it doesn’t stop her enthusiasm.

The island’s yard signs all point to the need to vote in this election, which is said to be the most important election in U.S. history.

Verify your voter registration by visiting myvote.wa.gov. If you are not registered, or if you have moved, you won’t receive a ballot for elections. You can update or submit your registration up to ten days before the election to the Elections Office in Coupeville. Phone number: 360-679-7366 or email: Elections@county.island.wa.us

Visit Island County Election’s webpage and raise your awareness about your privilege and responsibility for voting in the November 3 election. Ballots will be mailed to Island County residents Tuesday, October 13. Ballots must be postmarked by 8 pm November 3.

Completed ballots can also be dropped off at:

Finally, October is Civility Month. Please keep in mind the power of bridging our differences through dialogue. Civility First is hosting virtual workshops starting Saturday, October 10. View the schedule and register for free online events at Civility First or email civility1st@gmail.com to receive a Zoom link.