What we do with our extra stuff 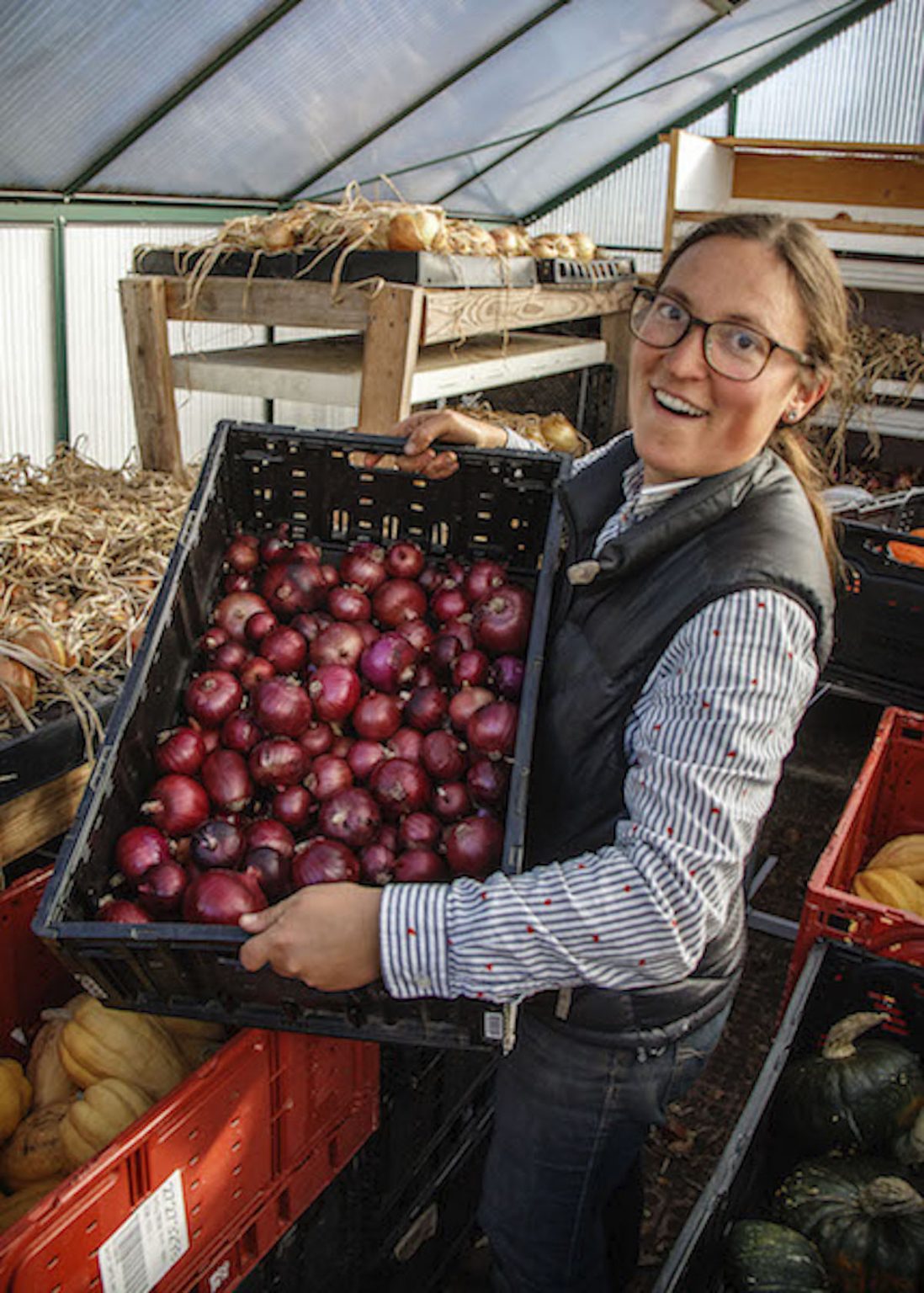 Stephanie Turco, manages Good Cheer's garden and winter veggie hoop house. Here she is in a 2018 photo with a harvest of red onions

Before coronavirus came and stayed longer than we wanted, we routinely gave our used things to Good Cheer, Senior Thrift, and WAIF. We shopped at their stores, recycling one another’s goods, and helping the non-profits earn a steady income.

However when coronavirus restrictions became effective in March, our local thrift stores stopped taking donations for a while. When they did re-open this summer, Good Cheer and Senior Thrift accepted donations just one day a week. While WAIF accepts donations six days a week, it closes when its capacity is filled.

Our South Island thrift stores maintain social distancing requirements and quarantine donations for 48 to 72 hours before handling and placing items up for sale.

I spoke with Carol Squire, Good Cheer’s executive director, last week. The food bank, which is supported by two thrift stores, serves any South Whidbey resident in need of food assistance. Its Bayview Road distribution center and food bank renovated its kitchen and grocery store last month with a new roof, refrigerators, freezers and shelving, thanks to CARES funding grants.

“Everything’s going smoothly,” Carol said in a phone call this week. “Receiving donations from the public is COVID-regulated. We’re marshaling our forces on Thursdays, from 9 am to 2 pm. People come in their cars and stay in their cars. We have a whole team and take what we can. Some days we have no more room. We bought more containers with grant money to give us more storage.”

Good Cheer’s Langley and Clinton thrift stores are each open two days a week, rather than every day as they were in pre-COVID times. Despite having only four days to shop instead of 14, store income remains steady.

“We are earning half of our usual revenue than when we were open seven days a week,” Carol added. “Rather than increase the days, we’re staying safe. People are being really good about bringing us really good items.

“We don’t feel overwhelmed (by too many donations),” Carol added. “Our systems are working really well. Customers are cooperative. We’re not finding we have to limit the number of people in our stores.”

Books? Good Cheer is not accepting book donations at this time.

“Book donations are not a new problem,” Carol said. “We’ve been sharing excess books with the South Whidbey Commons and our libraries. There are just too many books. Certain types end up in recycling. Sometimes there are valuable books. We have some people spotting them, pulling out books that might sell for a higher price on Amazon.”

I spoke with Sue Hayworth, bookstore coordinator for the South Whidbey Commons. She said used book sales are on hold for the time being while the bookstore/coffee shop undergoes renovation and the cafe interior remains closed to the public during the COVID pandemic. The cafe serves patrons from a walk up window these days.

Sno-Isle Libraries have suspended donation of books for Friends of the Library book sales until re-opening their buildings to the public in an unknown future. Senior Thrift accepts limited numbers of book donations on Sundays. Here is a link for mainland sources that also accept book donations.

Meanwhile, Good Cheer is selling some of its high-end items on Ebay.

In addition to donations of household goods, Good Cheer gets fruits and vegetables from locals. Two years ago This is Whidbey published a story on Good Cheer’s gleaning of local produce, which is available for food bank customers who shop on a point system.

“Gleaning is limited this year,” Carol said. “We decided not to make it a priority because of everything else that is going on. People who have donated fruit in past are getting in touch We don’t have a big group of volunteers to go out and pick. We love when people donate food, though, especially healthy food.”

Good quality fruit and vegetables that have been picked and not lying on the ground can be delivered to Good Cheer, Carol said. And there’s a limited amount of volunteers who can go and pick ripe fruit from yards.

Additional fresh food for the food bank is grown in Good Cheer’s garden and winter hoop house, managed by Stephanie Turco and made available to the food bank’s patrons.

“Our garden manager Stephanie is terrific,” Carol said. “She’s a soil biologist and really understands what’s going on. We’ve always produced high-quality food from our garden and plan on growing winter crops to keep fresh produce going. Another big push is our Eat Local campaign. When COVID hit, it really struck home that we are dependent on our local food systems. We are working with the Organic Farm School, Whidbey Island Grown, and contracting with local farmers to buy their produce. We got a grant for the food pantry through the state. That gave us a certain amount to give to farmers.”

This year’s Good Cheer fundraiser, Empty Soup Bowl Night, will be Zoomed November 20. For a donation, the community can purchase hand-made donated pottery bowls and have a virtual feast together. Good Cheer is seeking local recipes, which the food bank will publish online. Check in with Good Cheer’s Facebook page for more information on this event.

“It’s about compassion and community— the values we are holding,” Carol said. “When I read or hear about what’s going on, I think we’re really living in a good place.”

In addition to our thrift stores, our local recycle centers are seeing an increase in locals divesting themselves of things they no longer need.

“Three-quarters of the stuff that people bring in, I tell them to take to the dump,” said Jill Campbell, co-owner of Island Recycling, who runs the eclectic center with her husband Dave. “We’ve been slammed since COVID began with people trying to give us their stuff.”

“The dump,” as Jill refers to it, is Island County’s Coupeville Solid Waste Complex. Gynon (pronounced Ja-non) Nash, is the site’s Solid Waste Attendant Supervisor. In an interview nearly two years ago with This is Whidbey, she reported that of the 55,300 tons of trash processed in 2018, six to eight full semi-truck trailer loads a day are driven to Burlington where they are offloaded to an eastbound train and taken to the Roosevelt Regional Landfill in Roosevelt, Washington.

As we continue to scale down our stuff, hopefully we can donate it to thrift stores and recycling centers before it ends up in far away landfills.