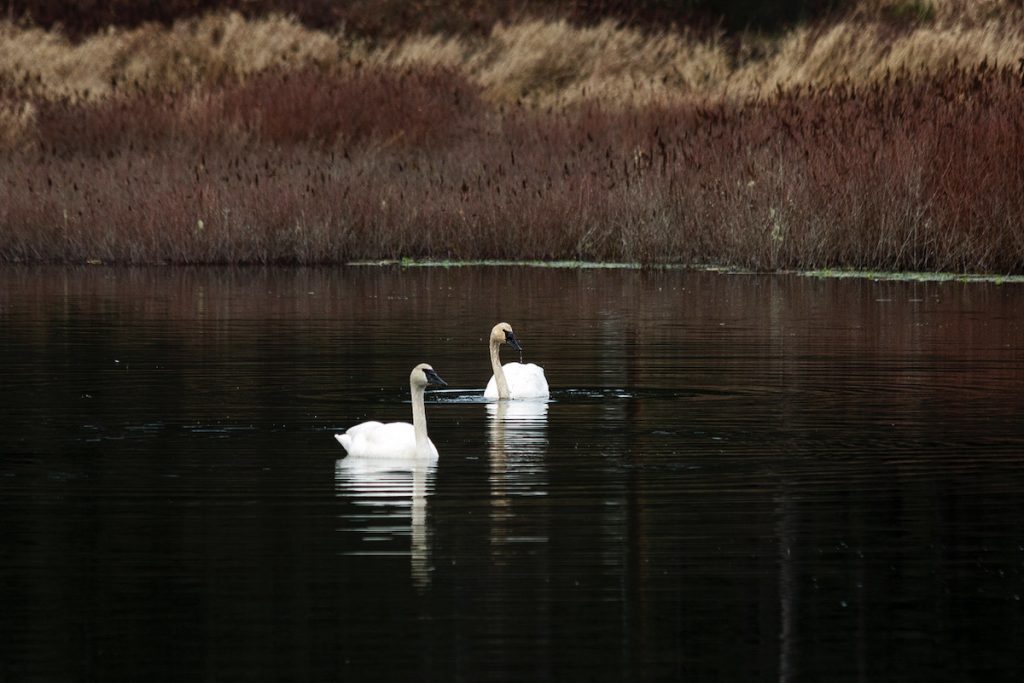 “Hi David,
Thanks for the email and the beautiful photos!
So, re-reading the article, it mentions the swan was a cygnet in 2019 (gray). That means it is only 2 1/2  years old now in 2021. That is early for it to have a mate- a swan is mature enough for breeding when it is 4-6 years old.  So, the new swan may be a friend, rather than a potential mate. Your swan would still be considered a ‘non breeder”.  However, pair bonds can begin around 3 years of age. Who knows, maybe the other swan is an older swan and has picked out your swan as its potential mate!
Margaret”

Note: This is Whidbey’s photographer David Welton often rides his electric bike around the Maxwelton Valley, and sighted this beautiful bird a while ago. This is David’s story.  —Kate Poss

While many travel Cultus Bay Road daily, most fail to notice the majestic white bird cruising the shallows of the far shore of the wetlands, feeding on grasses and water plants, preening or shaking water off his six-foot wingspan. A solitary Trumpeter Swan has made this home since
fall of 2019.

Trumpeter Swans were once a prolific species, present throughout northern America. John Muir may have seen them as far south as Mono Lake in June of 1853. Habitat was lost as wetlands were drained for agriculture, industry or homes. The birds were hunted for their skins and feathers, to decorate ladies’ hats or boas, powder puffs, wig foundations, or quill pens.

Other hazards Trumpeter Swans face include predators such as coyotes, collisions with power lines, and lead poisoning from ingesting fish sinkers.

The Lacey Act of 1900 and the Migratory Bird Treaty of 1918 aimed to protect the birds, but nevertheless the population declined drastically. By 1932 there were only 69 Trumpeter Swans in the continental United States, mostly in or adjacent to Yellowstone National Park. Red Rocks National Wildlife Refuge was then established in 1935 in Montana’s Centennial Valley. Later, a population of several thousand birds were discovered in the Copper River area of Alaska in 1954.

Restoration efforts followed the passage of these protection laws and refuges. Eggs and captured birds were relocated to Red Rocks, and Carver Park Refuge in Minnesota. The Trumpeter Swan Society was established in 1968 “to assure the vitality and welfare of wild Trumpeter Swans.”

Pacific Coast, Rocky Mountain, and interior populations were re-established, and by 2015 there were an estimated 63,000 Trumpeter Swans in the U.S.

Gary Ivey, a former biologist at Malheur Wildlife Preserve in Oregon, and president of the Trumpeter Swan Society, said in a recent webinar, that there are 765 Western states Trumpeter Swans. He has relocated and released trumpeters at Summer Lakes Wildlife Area in Oregon, and other suitable locations throughout the state. He hopes to establish year-round swan residents, but many migrate, possibly to Vancouver Island or even the Skagit Valley, where they were photographed for the Everett Herald, feasting on potatoes in flooded fields of Fir Island.

Nobody knows how the Clinton Swan tumbled into the Cultus Bay wetlands. The bird was first seen and identified this past fall, and has remained throughout the winter. Gender is unknown—sexing requires a detailed examination by an expert. When first spotted, the swan had the grey mottled plumage of a juvenile bird, so the animal is now about one-year-old.

Trumpeter Swans are social animals, and a single swan is “not normal,” says Gary. Possibly our Clinton swan was very young and recently fledged prior to its migration and became fatigued or injured en route.

Another single Cygnus buccinator was sighted in April, 2019 at Abe Emerson Marsh, the first Trumpeter spotted in New Hampshire in 200 years. It created quite a bit of excitement in the Audubon Society.

Diana Stephens, field notes coordinator for New Hampshire Bird Records, writes in an e-mail: “Our” New Hampshire Trumpeter left in mid-November on migration to who-knows-where. It left somewhere between Nov. 15th and Nov. 19th. That’s when the pond began to ice over. I really hope that the bird found a flock somewhere, but we will probably never know. We were all hoping that he or she would return with a mate this past spring, but instead of our Trumpeter friend, we got the Coronavirus!! I became quite attached to the bird, and I just hope it is doing well wherever it is.”

Diana writes in A Trumpeter Swan in New Hamspshire, an Historical Perspective, “Jessica Carloni, water fowl biologist at NF Fish and Game theorizes that this bird may have gotten pushed out because of high density in its former flock, wherever that was.”

High density somewhere might be good news for this previously endangered species.

Covering the sighting, the Concord Monitor newspaper reports: “The Trumpeter Swan is an ‘indicator species’ of healthy wetlands and waterways. They thrive in clean waters and high-quality habitat that supports countless plant and animal species.”

***
It will be fun to see what develops with our swan right here in Clinton on Whidbey Island! Ten acres of wetlands provides plenty of food. They can eat up to 20 pounds of water plants daily. His habitat was drained in 2009 when the beaver dam ruptured, flooding the Glendale valley, but the beavers have been busy since then, and the wetland water level is high late this August.

He has at least a 6-foot wingspan, and adults can weigh up to 30 pounds, so eagles won’t bother with him. It is illegal to shoot swans—hunters will be ticketed and fined. He seems happy and healthy.

Dyanne Sheldon, a wetlands specialist and environmental consultant who lives nearby, has seen him fly. She writes: “It can/does fly…never long distances that we’ve seen. We’ve seen it take off and circle around the wetland a few times, then settle back in. Now that there is so much emergent vegetation in the wetland, the ‘take off’ zone is far more limited (literature claims it needs 300 ft of open water to run up to speed…but I’ve seen this one take flight with less runway than that).”  On July 31 Dyanne reported: “A few nights ago the swan took off and circled around the wetland four to five times before settling back down.”

Take heart, the presence, even if only for a short period of time, is living proof that restoration efforts can be successful.