Sprucing up the Bus Barn with Troop 57 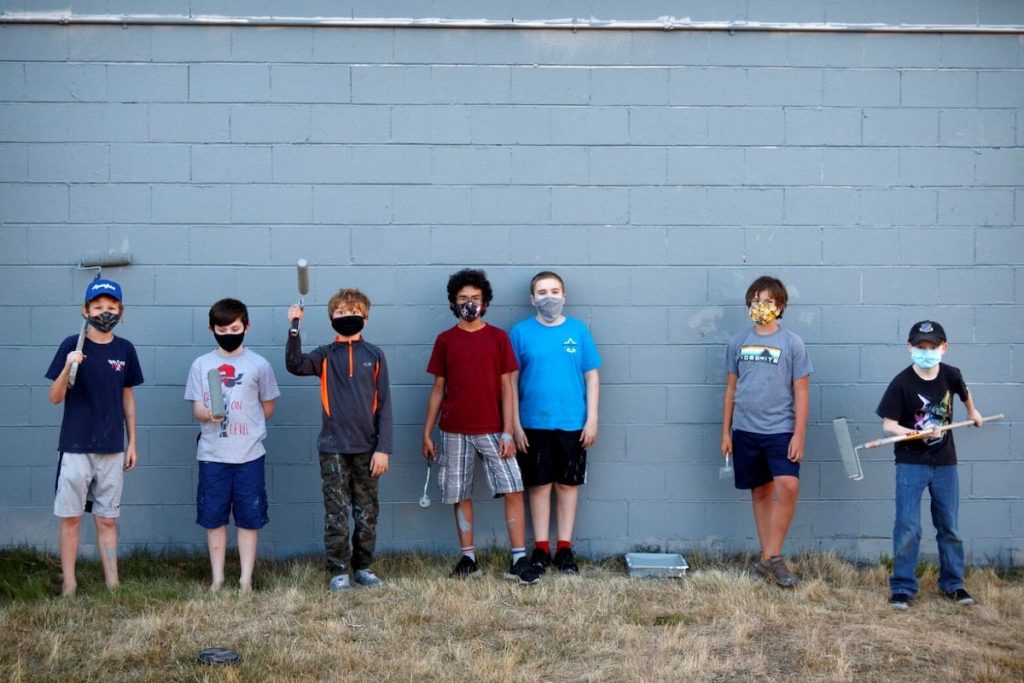 You may have noticed the once shabby walls of the South Whidbey School District bus barn have taken on a new look. The old building, whose one good face shows a terrific mural celebrating Langley’s usual Django Fest—cancelled this year due to the COVID pandemic — had fading, peeling paint beige walls needing attention on the remaining three sides.

Langley Creates proposed to give the old building a facelift,  contacted Boy Scout Troop 57,  and asked for some help in getting it painted. The building sits in the parking lot at Cascade Avenue and Sixth Street near the Whidbey Island Center for the Arts (WICA) and the South Whidbey Community Center.

Langley Creates, one of four statewide districts to receive the Creative District designation, is, according to its website, designed to “…help Washington communities thrive. This award-winning program works to grow the creative sector. It helps communities turn cultural activities into economic growth.”

The building, originally owned by the South Whidbey School District, would have cost too much to tear down, said Mary Ann Mansfield, chair of Langley Creates. In the mean time, since housing school busses long ago, the bus barn has been used for storage. Mary Ann and two others spent about 40 hours scraping off the peeling paint and getting it ready for the Boy Scouts to paint it with dark gray primer. The next step involves painting it in a palette of barn red, warm

Organizing the Boy Scouts for this project was Jeremy McKnight, Scoutmaster for Troop 57. “We were asked by a nice lady to help,” Jeremy said about Langley Creates’ request. “Should take a couple of days. The scouts can earn points toward rank advancement by doing this community service.”

Jeremy recalled his inspiration from Boy Scouts, which influenced his career later on, “When I was a scout, my mentor was an engineer,” he said. “We all became engineers.”

Even during the Covid pandemic, Jeremy said, the scout troop is growing in numbers. To keep up with social distancing requirements, gatherings are limited to groups of ten or less.

On a late summer early evening, the scouts gathered and said the Pledge of Allegiance. They picked up long poles, short rollers, paintbrushes, and within two hours had painted three cinderblock and wood walls.

“We’re choosing to meet outside,” said Rob Mellish, committee chair for the adult committee which oversees Troop 57. “We plan on canoeing next week. He then stepped away from our chat to ask the scouts to spread out to maintain social distance.

As the evening sun cast a golden light, Mary Ann snapped a photo of the scouts posing as Ninjas with their painting tools. While they rolled and painted and sprayed, a couple of the scouts imagined painting a mural. creating arcs with their rollers before painting over their creation. “It’s a work in progress,” one Scout said to his compadre,” as if he were creating a masterpiece.

I spoke with Tara Hammons, who was a den mother for her son Parker’s Cub Scout pack. Now Parker is a new Boy Scout and part of this night’s painting crew. “Part of me wants to help,” she said from a lawn chair, as she watched the boys working together. “I painted my last few houses by hand. Now Parker’s learning how.”

Tara added she liked Troop 57 and its creating a focus for her son during the coronavirus shutdown of school classrooms, which evolved into online learning.

“I worry about how the kids are coping with online learning, on devices for hours,” she said. “At school there can be cliques of friends. Here they’re different, but have the same morals.”

This is Whidbey’s photographer David Welton stopped by, seeing the team of scouts painting and asked if they had read Tom Sawyer. One Scout  said he had read Huck Finn. David mentioned the famous painting scene in Mark Twain’s Tom Sawyer, where Tom convinces a dozen boys to paint a fence, and makes them believe it was fun, when the truth was Tom’s Aunt Polly asked him to paint the fence as penance for prior mischief.

By the looks of it and by listening to the Scouts, they enjoyed themselves. Thank you, Troop 57, for your part in sprucing up an old building that needed attention. Thank you, Langley Creates, for taking on the project.