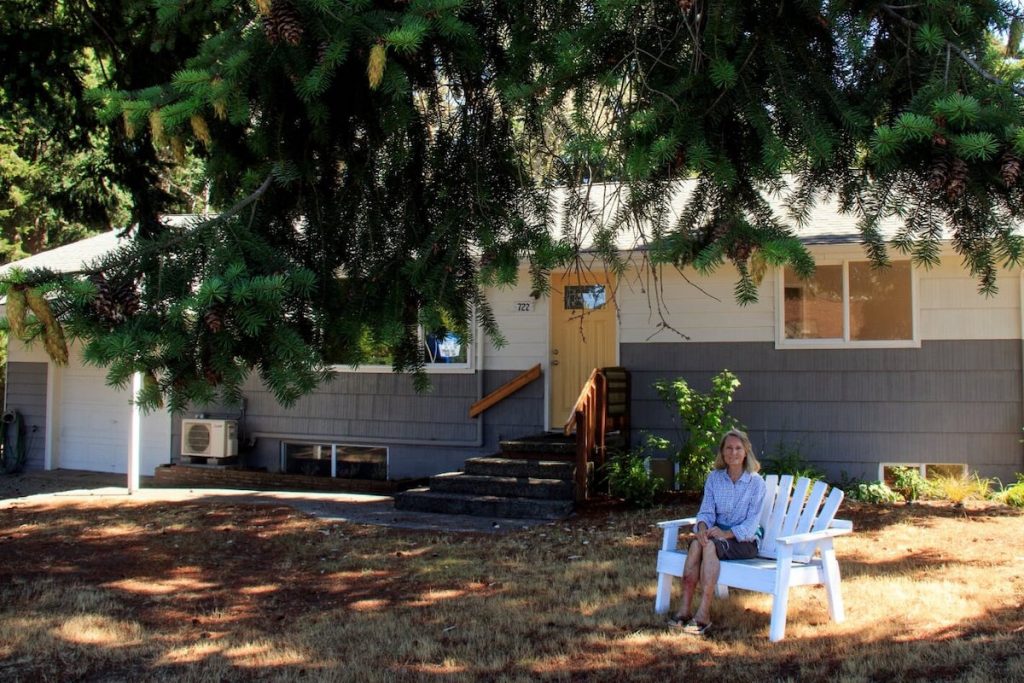 Coyla Shepard, founder of THiNC, in front of the main house that will anchor a future tiny home village in Langley

Affordable housing is not easy to come by these days on Whidbey Island. Our elders, young people, young families, folks who have lost their jobs, artists, minimum wage earners, and others deserve a safe place to live that is within their means to pay.

In the face of this growing need, which has expanded in the wake of the coronavirus pandemic, a band of can-do organizers have created a plan to build ten tiny homes which can serve as a model for other communities.

“We are Christ’s hands and feet prepared to act on behalf of those in need. To fulfill the great commission of loving our neighbors by caring for those in need of affordable housing,” is the motto for Tiny Houses in the Name of Christ or THiNC, a non-profit formed three years ago in collaboration with St. Hubert’s Catholic Church, Island Church of Whidbey, South Whidbey Assembly of God, Trinity Lutheran, Calvary Chapel – Whidbey, and Langley United Methodist Church.

Retired teacher Coyla Shepard and founder of THiNC, was launched into finding shelter for others five years ago. Seeing the forlorn expression of a boy, whose mother was facing eviction, Coyla was moved to help them.

“I was volunteering at The Hub (a non-profit after-school program), as a cook,” Coyla said. “There were three boys there. One was a special-ed kid with the saddest face. He said, ‘We were being evicted.’ The landlords were getting divorced. A widow with three big teenage boys. I asked if his mom had a car and asked, ‘Where would you go? He didn’t know. Two days before New Year’s I called them. I asked where they would be. I talked with the Calvary Church. They put them in the little room over the garage. A son stayed with friends. By the end of January, Judy (Thorslund of the Whidbey Homeless Coalition) put a notice in the paper that she had scheduled a meeting regarding the homeless. I got a hold of this lady and said, ‘We’re going to go and find a house.’ We did not find an apartment until months later. Then people said, ‘Coyla, you’re in charge,’ because I was the only retired person and most the attendees had full time jobs. I had the housing committee for the Homeless Coalition. I started collecting info. on tiny houses then. That was 2015.”

By 2017 THiNC had formed its own non-profit. The group bought a broken down, neglected and abused house across from the South Whidbey Community Center. Through sweat equity, donations, and hours of volunteer work, the home was restored. A single dad and his children recently moved out and a new family will move in soon.

Coyla explained why THiNC formed its own non-profit after first being a part of the Whidbey Homeless Coalition, which runs The House of Hope, and The Haven in Oak Harbor.

“They (the Whidbey Homeless Coalition) took on so much with overnight housing,” Coyla said. “We started a separate nonprofit: Tiny Houses in the Name of Christ. At first we couldn’t get anyone to do this project. I said if we get one person from each congregation, they could help. And businesses. And the Rotary. That’s how it got going. The thought began with the Homeless Coalition.”

Petite and friendly, one is drawn to Coyla’s easy camaraderie and her wish to make our community a better place.

Ten tiny homes, about 264-square-feet each, are planned for the large yard behind the home. Their construction is imminent, pending a civil engineer’s submitting a permit for hook up to Langley’s municipal water and sewer system.

This is the first project of this type on Whidbey Island.

“We greatly encouraged it,” said Langley Mayor Tim Callison in a phone chat. “We created tiny home ordinances with this development in mind. Coyla had dialogue (for the project) in mind when she approached us and her plan offers a great opportunity to have the working homeless have a place to call their own. Eventually they will be able to get on their own and move on to to get more conventional housing. Same as with The House of Hope, which allows people to have some respite, get on their feet and get on their with life. Everyone deserves a chance.”

Another area zoned for affordable housing is the Upper Langley Cohousing community in upper Langley.

“It is zoned permanently affordable housing and is deed-restricted so that it has to follow covenants,” Mayor Tim said. “In exchange, the city allowed additional allowances for density, and septic permeability, donated a chunk for free and open land.”

According to Upper Langley Cohousing’s webpage, “Roughly 1/3 of the 10-acre parcel was set aside for the community to build homes (on their individually owned lots), paths, a community house and shared garden. The rest of the land is co-owned by community members and remains protected as undeveloped forest land and meadow.”

“For the folks looking for places to live,” he said, “you can convert a single family home into a boarding house. We’re positioned for this kind of growth. Brigid Reynolds (Langley’s director of community planning) has great vision in guiding the city to adopt these land use proposals.”

Mayor Tim said that expansion of higher density affordable housing can be a reality in the city, now that its $4 million infrastructure bond was passed last year and Island County awarded an additional $3 million to upgrade the city’s water and sewer pipes.

“We have 150 homes not on sewer,” he said. Getting agreement on additional housing will require raising of awareness for some who like things the way the are.

“Ultimately Langley’s a small wealthy town and we do run into NIMBY’s,” he added. This is an opportunity for more progressive development.”

Back to THiNC, the home design is provided by International Homes of Cedar.

“They gave us one house at cost,” Coyla said. “We will use the same plan over and over. Rent will be on a sliding scale. Having affordable housing is crucial now as our local workforce are being priced out of the housing market.”

“Dianne did a beautiful landscape, she’s incredible, and has a heart of gold,” Coyla said.

The property will retain existing Douglas firs and Madrone trees, which provide a sense of place to the property.

“We’re so blessed,” Coyla said. “There is low income housing behind us, the House of Hope at the end of the block. The community center across the street. Couldn’t be a better piece of property.  Fortunately we have had great volunteers from churches and friends and neighbors, too.”

Coyla sent a text, writing, “…think it would be good to list these board members and the churches they attend, as everyone is likely to know someone: “

“This is a wonderful example of our amazing community coming together,” Helen Price Johnson, Island County Commissioner, District 1 wrote in Facebook Messenger. “I appreciate Langley’s innovative approach to zoning, and the partnership with Island County to invest in the infrastructure necessary to add workforce housing for our families.”

Island County’s Housing Support Center offers assistance in helping those who are homeless and at risk of becoming homeless. The site links to the county’s subsidized housing as well. Bear in mind, that the wait for this affordable housing can be up to five years.

Please visit the THiNC webpage to learn more about this innovative group, make a donation, or volunteer.